Alleviating the need to waste time and extra money swapping out barrels, Smith & Wesson cuts out the middleman with the new suppressor ready M&P22 Compact.

Suppressor ready equates to the M&P shipping with a threaded barrel in lieu of a non-threaded barrel meaning the M&P is ready for a silencer right out of the box, so long as that can shares the same 1/2”-28 measurements. If not, a thread adapter promises to solve that problem.

I paired a Gemtech Tundra with the M&P. The Tundra is a dry suppressor so it does not require lubricant to operate properly. It’s also a direct thread model. The Tundra is not a dedicated .22LR can. It’s designed for 9mm but because .22LR is a smaller round, I was able to successfully run it with the M&P.

Some manufacturers get too adventurous with design and forget functionality. This isn’t the case with the M&P.

Marrying a polymer frame with an aluminum alloy slide and carbon steel barrel, the M&P is a lightweight pistol. Sometimes polymer can feel a little too toy-like, but Smith & Wesson has done an extraordinary job of weighting the slide and barrel so that the M&P feels like a real gun but doesn’t wear you down shooting.

It doesn’t hurt that the M&P is a .22LR. Notoriously easy on the wrists and arm, the .22 barely bucks. Pair that with smooth slide action and the M&P makes for a long, fun day at the range.

Ergonomically speaking, it’s a great fit. That polymer frame I was speaking of molds well into the hand. It also provides a solid point of contact even with sweaty hands. Smith & Wesson understands the plight of southpaws and offers an ambidextrous magazine release and thumb safety for lefties.

I popped some snap caps in the pistol to get in some pre-range practice. The sights, elevation and adjustable windage are phenomenal. They really stand out, making sight alignment a smooth process. A pull of the trigger revealed that I wasn’t too fond of the feel. It’s a bit mushy for my tastes. My shooting buddy, however, loved it soft; proving some things are just a matter of preference.

The M&P does embrace the tactical life with a picatinny rail for laser and light mounting. I also found the mag release to be just perfect for tactical reloading. It’s the right amount of pressure to release.

On the firearm, the silencer does add some weight to the barrel of the pistol. It’s not enough to throw shots or cause any downward pitching. If anything, the silencer obstructing my sight picture caused more precision problems than anything. I can’t blame the M&P for this one. I have the same problem shooting my Glock 17 suppressed.

As easy as installation of the can is on the M&P, removing the thread adapter to swap out or to take-down the pistol is another story. Smith & Wesson does include a wrench for the thread adapter; but the adapter is on so tight that the wrench is basically useless. I put some serious elbow grease into it and couldn’t budge the adapter an inch. A quick Internet search proved I wasn’t a lightweight and this seems to be a common problem. Smith and Wesson may want to consider providing a better wrench that’s more capable of tackling this task in the future. 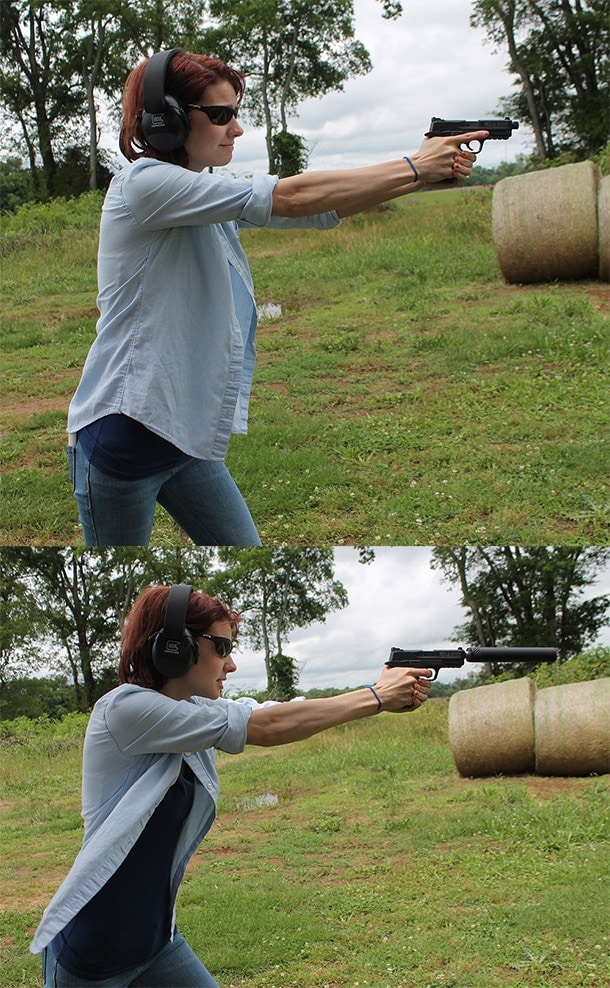 SW M&P22 compact can be attached to most suppressors through the use of adapters. (Photo: Jacki Billings)

Sounding like a BB gun, the M&P handled the Tundra like a champ. Hearing protection should always be used when target shooting; but if you were to forget to pop them on or in it wouldn’t be an issue with the silencer installed.

A silencer on the M&P22 platform would be especially helpful for shooters nervous of big bangs and recoil. The weight of both the gun and silencer make recoil negligible. The bang is converted into a low pop. It’s a win-win.

Aside from the obvious noise reduction, my accuracy was in tact for the most part, though I wasn’t driving shots down the same hole, especially at 15 yards. The sights function well without the can, but are obstructed once the suppressor is attached. My shooting buddy agreed that his view was obstructed and he was forced to walk his shots up to get the group he wanted. It’s a small challenge, but not an insurmountable one. It’s also not unique to the M&P22. I’ve shot my fair share of suppressed weapons and some cans just obstruct the sight picture.

As with any direct thread can, I retightened periodically to prevent wobbling. A wobbly suppressor causes baffle strikes, which not only affects accuracy on the range but can also cause internal damage to the silencer. That adjustment was the only major maintenance needed on the range.

Not to say that I didn’t see a couple of small malfunctions. Within the first 50 rounds, I had two failures to fire. I wasn’t exactly surprised as I was shooting a rimfire and the rounds it failed on were from the cheap box. Rimfires are known for hanging up on budget rounds. Aside from those two incidents, the rest of the day was malfunction free.

On its own the M&P22 Compact is a solid contender in the rimfire ring, but the addition of the threaded barrel adds flavor and life to the design. The M&P22 Compact Suppressor Ready model retails for $409.