It’s hard to describe the Taurus Curve. Caught somewhere between a semi-auto and a revolver, this unique little gun is certainly breaking barriers and causing a stir.

Chambered in .380 ACP, the Curve looks futuristic with its bowing side and rounded edges. With a matte blue finish that seems to resist fingerprints, the Curve is a head turner. Touting a “snag free” design, Taurus USA cut out several external buttons that could catch on clothes.

The first of these to bite the dust is the slide release, so you’ll have to do it manually. Remove the magazine, grab the rear of the slide, pull towards the rear and release.

The Curve forgoes traditional sights in favor of bore-axis sights that equate to lines painted on the back of the gun. Does this cut out snagging? Yes. Does it make it easier to shoot? No. Instinctive shooters will excel with the lack of sights, but anyone use to relying on sights will struggle to adjust.

Rounding out the snag free design, the Curve also lacks a standard magazine release button. Instead, you’ll find the mag release on the actual magazine, located at the bottom. While I find the design interesting, it took some time to figure out the best way to manipulate the button. After several minutes of trying, I managed to release it with the thumb of one hand. To accomplish this I had to move my hand down the grip to punch the release button.

Fans of tactical reloads, move on. It’s not happening with the Curve.  Moving your hand down the magazine means that you have to move it back up when you are ready to shoot. It takes too much movement and too much time to be efficient. 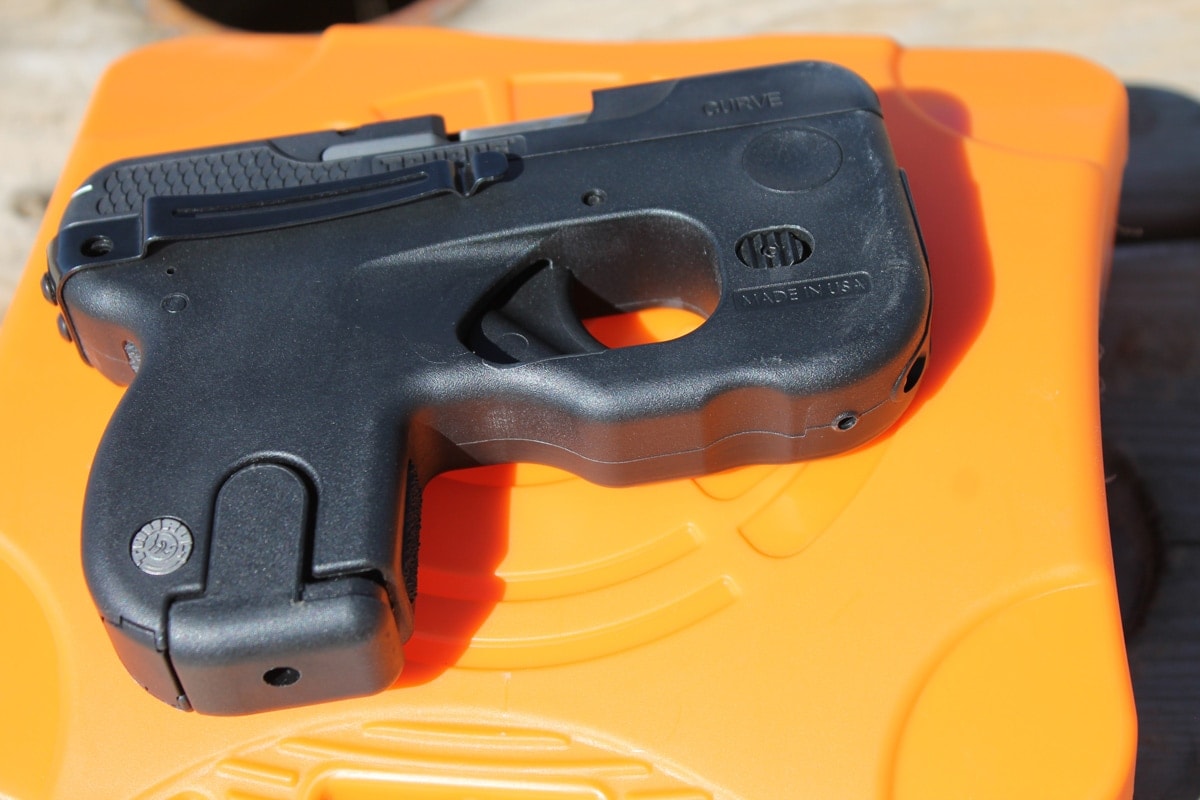 To appeal to the techier gun crowd, the Curve features an integrated flashlight and laser courtesy of LaserLyte. Out of the box, I was unimpressed. Both the laser and light seemed really dim and unable to do any real good. As I continued to play with them, however, they somehow increased in brightness. I searched the manual, but could find nothing on adjusting the brightness. Either I discovered something new or someone forgot to mention that in the booklet. Either way, it worked in favor of the Curve.

There are three modes: laser only, flashlight only, and laser-flashlight combo. A single button on the front of the Curve controls all three modes. When depressed for five seconds, the system cycles through the modes. The button also serves as the on and off switch. Turn it on and it’ll remain on for 6 minutes before automatically turning off.

The laser was the first mode I encountered. It wasn’t burred or muddled, on the contrary, it was sharp and on point. And since the Curve lacks traditional sights, the laser becomes a handy tool. Though it becomes washed out in sunlight, it’s enough to get you a few rounds on target at a 3 yard range. Any further than that in daylight and you aren’t going to see it.

The flashlight mode is a flashlight. It does its job and illuminates a decent sized area. I tried it down a long hallway and was able to see the entire length. I usually prefer a bright light to help blind a potential bad guy. While the Curve’s light doesn’t blind, it could serve as distraction.

The flashlight and laser combination I was most excited about and I have to say, it lived up to expectations. The laser surprisingly doesn’t get washed out by the light and manages to keep pace even down long hallways. This combination would be excellent in a middle of the night home defense situation.

Though the LaserLyte system was pretty impressive, it’s not that durable. As I was disassembling the Curve for cleaning after the range, the screw that keeps the on/off switch in place fell out. It’s so tiny, I almost missed it. Even worse, the exploded diagram in the manual made no mention of that tiny screw. It took the actual on/off switch falling off the Curve for me to realize that’s where the screw belonged. It’s one of those issues that you’ll need to be conscious off, because losing that at the range or while carrying would cause some heartache.

The Curve gets my approval for easiest and most concealable firearm. It’s small and thin, two concepts that go a long way when carrying. Due to its slimmer size, the Curve hugged my hip well. I was able to wear tighter T-shirts without the usual bulging around the firearm. 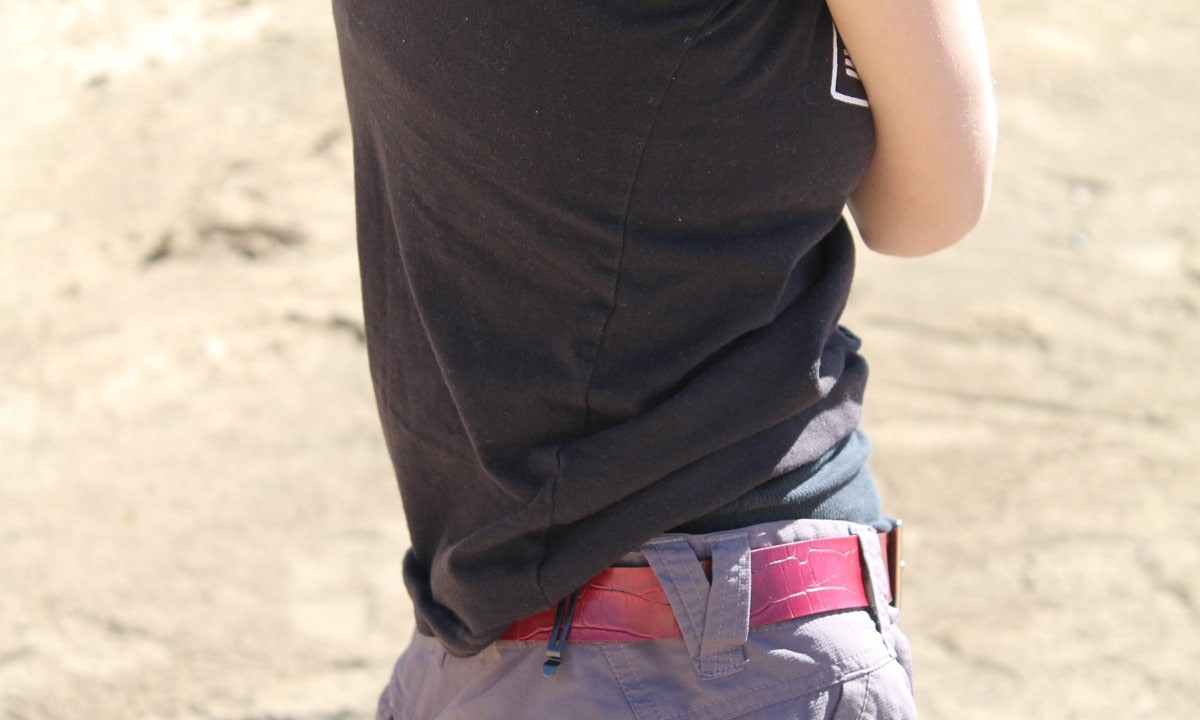 Can you see it? (Photo: Jacki Billings)

The Curve comes with a belt clip installed on the gun itself. While the safety conscious part of me prefers a holster, the belt clip’s efficient and does keep the Curve securely on the belt line. It can also be worn with sweat pants and yoga pants, opening up wardrobe options for those not always sporting a belt or jeans. 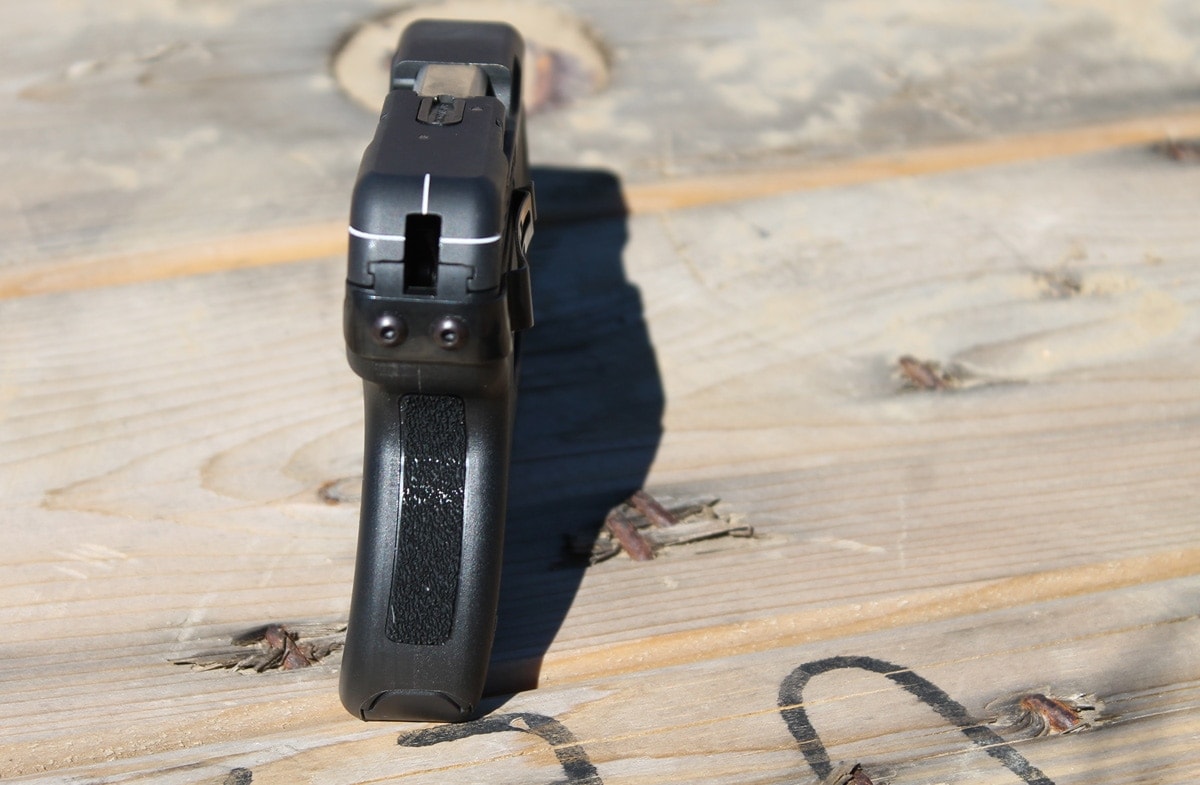 The frame curves on the pistol’s left side and has a clip on the right. (Photo: Jacki Billings)

The Curve also comes with a trigger guard holster that fits over the front of the gun and covers the trigger area. Using paracord to loop around a belt, the gun can then be tucked into a pocket or inside the waist.

Although I think the Curve would be exceptionally useful in the summer months, drawing is no easy task. Because the Curve is more aligned with deep concealment and therefore tucked further into the pant line, it can be extremely tough to present quickly. I wrestled and fought to get it up and out. Style of pants didn’t seem to matter either.  Because of its size, there’s just not good way to grab it quickly. 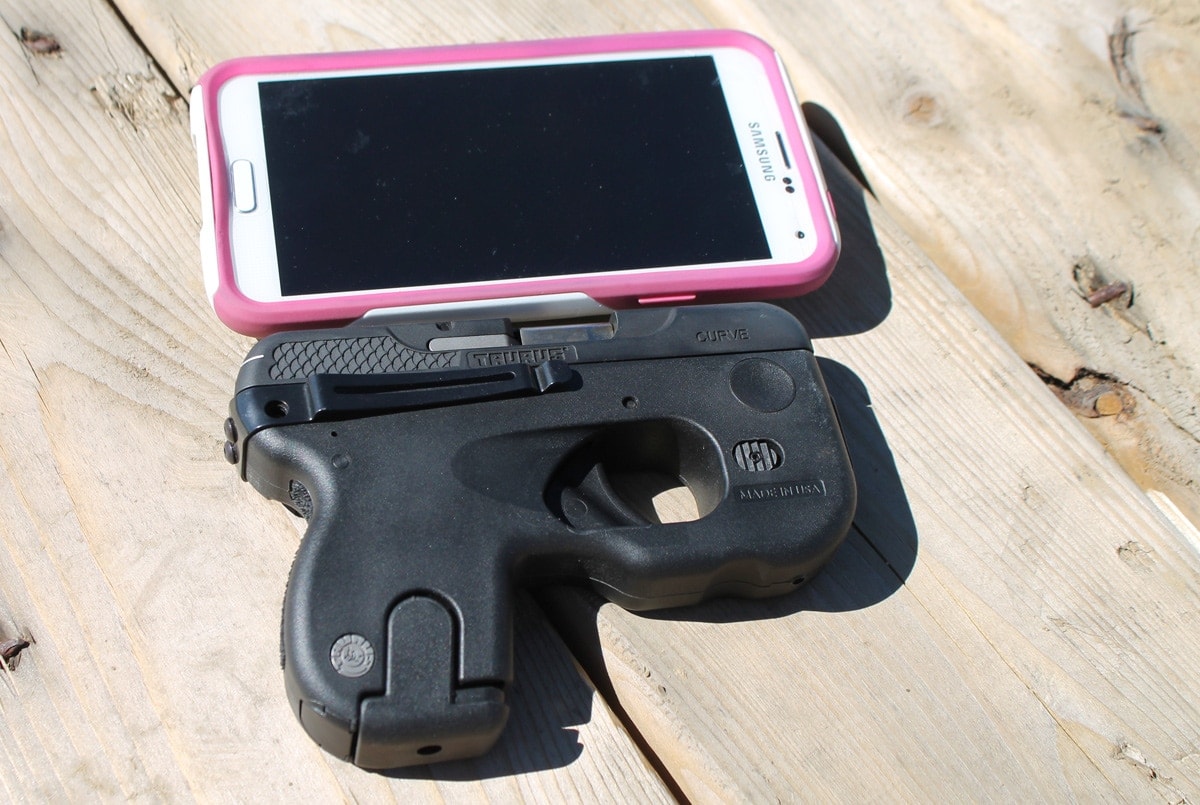 Bigger than a quarter, but small than a bread box. (Photo: Jacki Billings)

The ability to wear the Curve with multiple outfits and despite the seasons does give it an edge in the concealment department. However, time does need to be devoted in order to be proficient at drawing on this platform.

The Curve’s size impacts its shooting performance in several ways. The first is obviously grip. As I stated previously, getting a good grip is tough with such a small design. I couldn’t quite do a traditional semi-auto grip so I ended up using a Frankenstein monster mix of revolver and semi-auto placement. It wasn’t uncomfortable and recoil was never an issue, but the mixed grip took some time to adjust to.

Also worth noting is the placement of the magazine release on the magazine. While this does produce a snag free design, it can introduce malfunctions. Case in point, when I started running ammo through the Curve I had a few misfeeds due to the magazine practically falling out. I didn’t realize it, but as I was squeezing the grip I was accidentally squeezing the release causing the magazine to unseat.

On the range, I was able to adjust and release some tension but in a concealed carry defense situation this could be a major setback. While I think the snag free design is wonderful for the actual carry portion, if it ever came down to self-defense this design could prove detrimental. Having the Curve fail on me because I squeezed too hard and released the magazine in the midst of a shootout is going to make for a bad day.

Not unusual for petite pistols, the Curve suffers from being ammo specific. My first few shots with cheap ammo produced jam after jam. In fact, I averaged about two to three shots before she would malfunction in some manner. The first malfunction was an ejection failure. The Curve fired off the shot, but forgot to eject the casing. This happened a total of five times.

After the first ejection failure, the Curve suffered a light strike. A light strike occurs when the firing pin doesn’t strike the primer hard enough to cause the cartridge to fire. By the end of the cheap ammo, I experienced three light strikes. 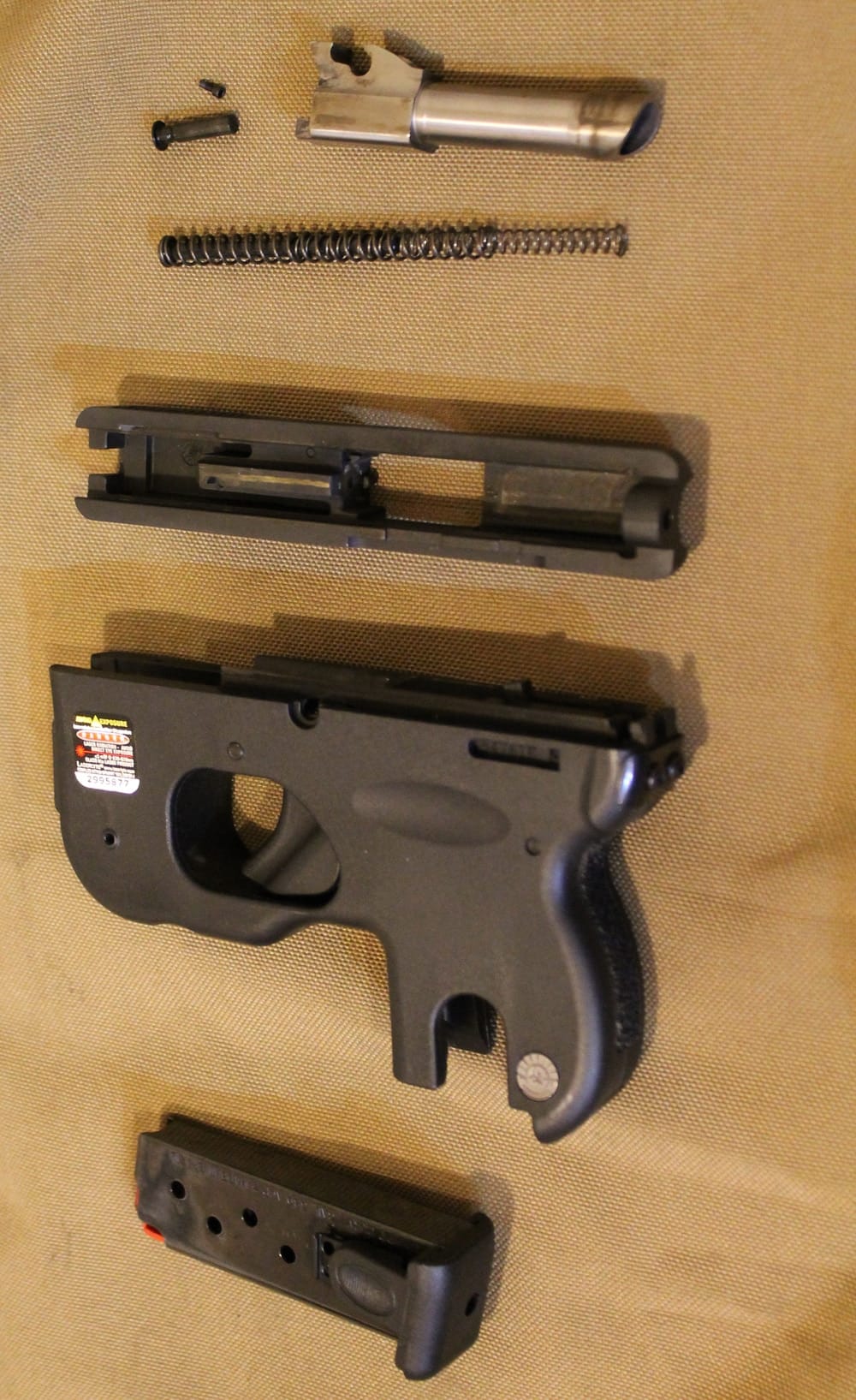 Initially disappointed, I upgraded to top of the line ammo to see if that would affect performance. The Curve performed flawlessly with no failures, proving that she is just fickle when it comes to cheap ammo.

Accuracy was also mixed. As stated, the lack of sights definitely has an effect on shooting if you aren’t an instinctive shooter or point shooting. Before switching to point shooting, I was all over the paper. The Bore-axis sights did me no good. It was frustrating and ultimately left me scowling at the results.

Switching to instinctive shooting yielded better shots. My groupings were tighter and at least all on paper.  My advice: stick with point shooting and you’ll be okay.

Despite the initial failures, the Curve has one thing going for it. It is incredibly fun to shoot. Taurus really got it right in regards to trigger and recoil. The Curve’s trigger is by far the smoothest trigger. Though long, it was a dream to pull. There’s no hitches or stops. It’s like butter under your finger.

Recoil management is also perfection. Despite the small and slim frame, the Curve doesn’t jump out of your hands. I shot two handed and one handed and both felt controlled. You can rapid fire all day without sore wrists or tired arms. If you want to plink ammo down range, the Curve is your pal.

The Curve is not for the experienced shooter. Seasoned gun owners will find its design baffling and its shooting unimpressive.

Where the Curve excels is with the one gun household or beginner shooter.  With less buttons and a more simplistic design, it is perfect for someone just stepping into the shooting world or for those who intend to only ever own one gun.  The laser and flashlight integration also make it a decent home defense companion. The Curve retails for $392.42.