Today’s hunters seem to continually seek the most modern, most effective weapons, be it long range rifles, crossbows, or in the black powder family, the latest in-line, long-range muzzleloaders.  Never one to rest on its laurels, or in this case, its super-successful Encore line of muzzleloaders, T/C has debuted a new-and-improved black powder rifle.  Has the company indeed improved upon one of the best, or is the Strike just a flash in the pan?

What defines the T/C Strike 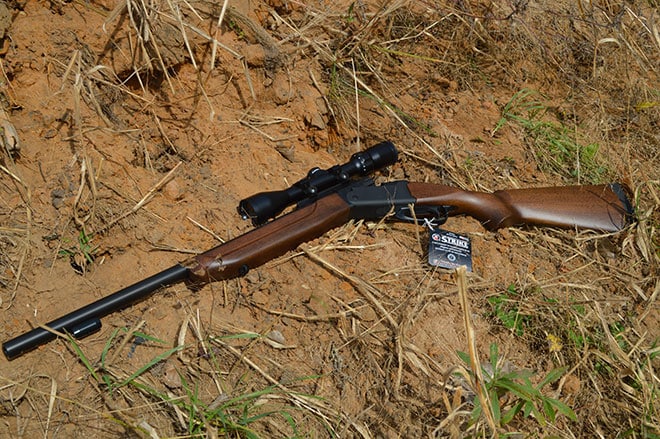 The T/C Strike, down and dirty. (Photo: Kristin Alberts)

The Thompson Center Strike is a .50 caliber, striker-fired muzzleloader that was initially sold as the LHR Redemption.  Since the time that T/C was been bought out by S&W, and the rights acquired, the rifle has been re-stocked, and remarketed as the Strike.  Sleek lines and the forward jutting trigger guard scream “modern” but it’s the firing features that set the Strike apart from most other black powder guns. 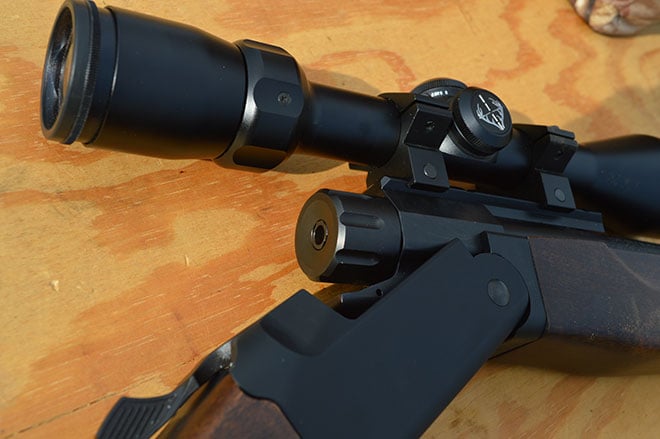 A new “Adapt” breech system moves the threads to the outside of the barrel, theoretically eliminating seized breech plugs and simplifying the cleaning process.  There are also a pair of included threadless primer adapters that hold the 209 primer.  One adapter is made for use with loose powder while the other is specific to formed pellet propellants.  T/C’s Armornite metal finish is essentially a nitride coating on both the outside and the inside of the barrel, and T/C advertises increased barrel life through corrosion resistance.  The 24” barrel has 1:28” RH twist rifling, touted to be ideal for today’s high performance projectiles and modern sabots. 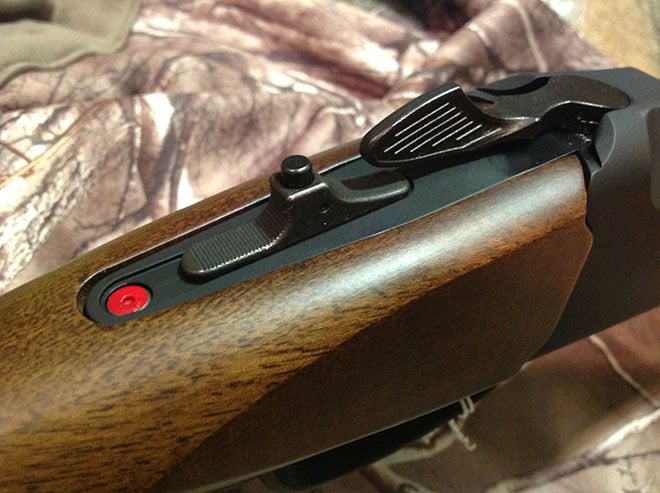 Also setting itself apart from other muzzleloaders, including the Encore, T/C’s new “Stealth Striker” ambidextrous cocking system replaces the standard hammer.  In the end, the sliding striker should be more quiet and less intrusive than standup hammers, which can interfere with optics.  A center “decocker” button allows the striker to be moved out of the fire position, essentially operating as the gun’s safety.   A match grade trigger is standard on all models of the Strike, and immediately sets it apart from most black powder rifles. 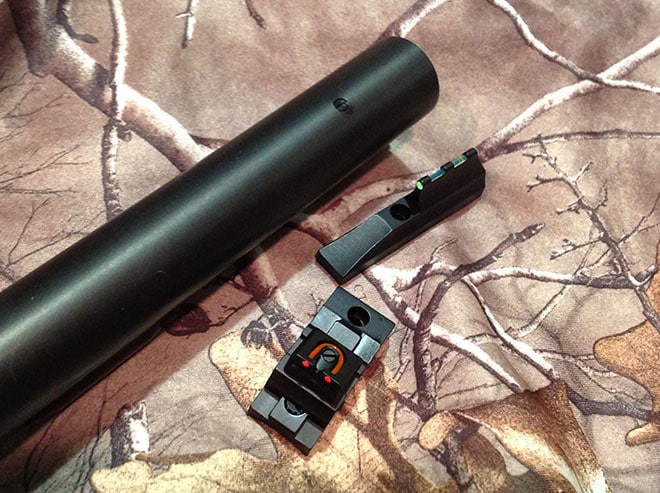 Adjustable fiber optic sights are included, as is a Weaver scope base.  Taking a page from the Pro Hunter book, the Strike also incorporates the T/C Quick Load Accurizor muzzle system, which essentially means there’s a false, rifle-less section at the muzzle allowing projectiles to be seated squarely and evenly for maximum accuracy potential.  The whole package comes with T/C’s Limited Lifetime Warranty for the original purchaser.  There are currently three models of the Strike available: a black synthetic, a G2 camo, and a Walnut with MSRPS at $499, $549 , and $599 respectively. 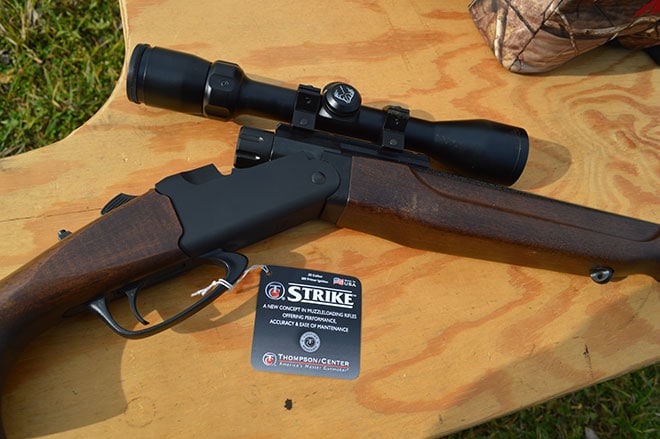 Our test gun came broken down and neatly packed in a small cardboard box. We mounted a middle-of-the road Bushnell 3-9x optic, and headed to the range.  For accuracy testing, we were shooting both Blackhorn 209 loose powder and Triple Seven pellets, partnered with Hornady FPB 300 and 350 grain bullets and Power Belt copper 245 grain bullets.  Accuracy was greatly aided by the trigger pull, which breaks cleanly at 3lbs-12oz on the Lyman digital gauge.  Average three-shot 100 yard groups were 3.32” with field cleaning after every five shots. 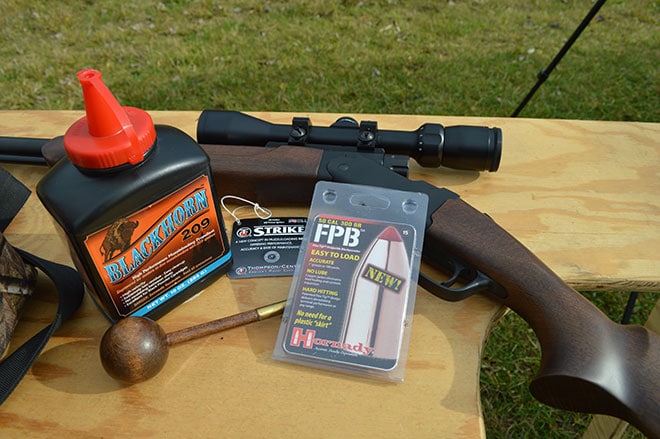 The best three-shot 100-yard group was 2.65” with Hornady FPB 300 grain projectiles and 110 grains Blackhorn. Shooting pellets more than six shots without cleaning opened three shot groups over 5.75 inches.  It’s also important to remember that the hand-pulled primer adapter must be changed out whether using loose powder or palletized, and should be kept well lubed, lest removal become a real treat.  Weighing just over 8 pounds with a scope, recoil with 100-150 grains feels more stout than it does with the Pro Hunter’s Flex Tech stock, though the Walnut stock adds to the rifle’s overall looks.  In fact, between the walnut furniture and the sleek lines of the muzzleloader, it looks at first glance more like an O/U shotgun than a smoke pole. 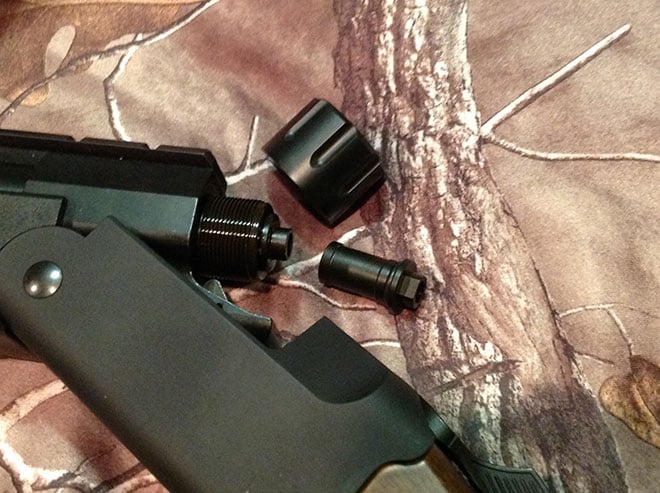 Primer adapter system, one for loose powder, the other for pellets. (Photo: Kristin Alberts)

T/C’s Armornite coating is nice on the exterior but even better on the interior.  We have all seen horrific looking bores and barrels of poorly cleaned muzzleloaders and while there is no replacement –or excuse—for an improper cleaning, a little extra insurance never hurts and can only improve overall barrel life.  Though it pained me greatly, I let the fouled Strike sit for 12 days before cleaning, and needless to say, it cleaned up no worse for the wear with neither rust nor pitting in the barrel. 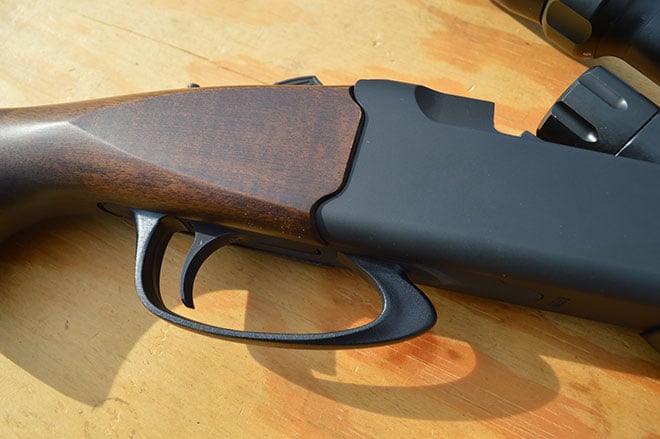 The match grade trigger is the best we’ve tested on a black powder rifle, and even better than some on some of today’s centerfire production guns.  The fact the Strike is made in the USA is a big plus, as is the company’s decision to include not only fine fiber optic sights, but also a Weaver base.  The Stealth Striker design eliminates issues with hammer/scope clearance, though it was neither noisier or quieter than a standard hammer, and in fact required a very strong forward push to engage.  Overall, the gun balances well, is easy to load, and has plenty of features that are sure to appear on future smoke guns. 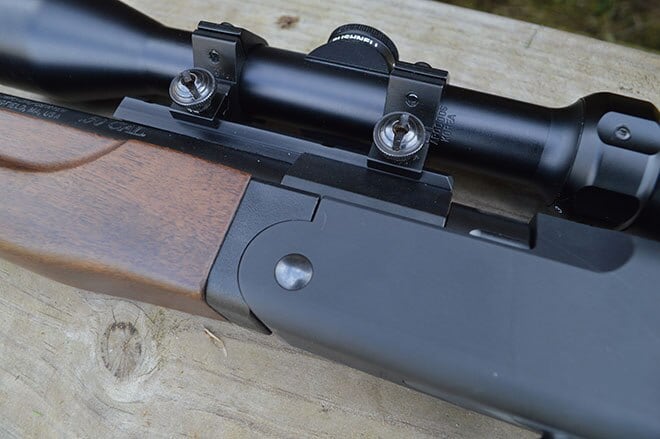 While I really (really) wanted to love this gun and replace my ProHunter muzzleloader barrel with this walnut stocked, modern smoker, things just didn’t shake out.  Right out of the box, the forend would not fit with the barrel mounted on the receiver.  It fit fine on the barrel alone, which made it clear there was a fitment issue between barrel/forend combo and receiver. As we could not reach the company for a timely replacement, we slightly widened the hole in the walnut forend and allowed it to function as intended. 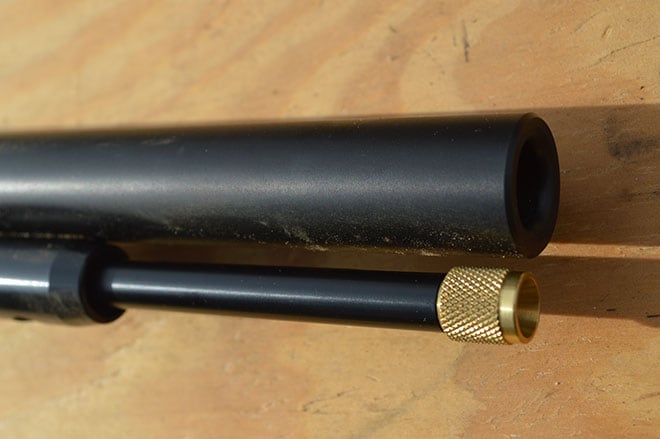 The second major problem came with the rod.  There was no retention to keep the cleaning/loading rod in place.  If the gun was tilted muzzle down, or even upon firing, the rod would slide right out, and in most cases, fall out completely.  We could not find the culprit or any loose retention parts, nor could a licensed gunsmith.  A further strike against the Strike was the company’s non-response to our attempt to reach customer service for rectification.  The trigger guard and forend trim are plastic/synthetic and not feeling especially durable.  Overall fit and finish was average, but not great, and nowhere near the quality of the Pro Hunters, though neither is the price. 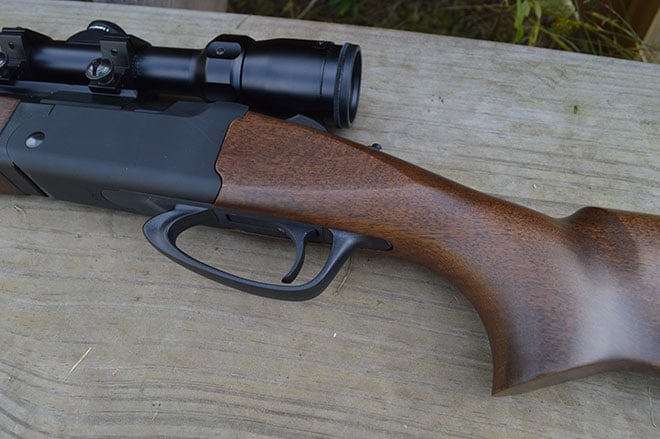 Had I not been in a committed relationship with my ProHunter, I may have found more adoration for the Strike.  But having shot what I consider the best, there’s no way to consider the Strike an outright improvement.  T/C is on the right track, however.  There are lots of features to like on the Strike, from the inside/outside Armornite coating, match trigger, and Adapt breech system.  The bases are loaded, the count is full, and the T/C Strike has all the potential to be a homerun.