The SOCOM 16 version of the Springfield Armory M1A series, chambered in 7.62x51mm NATO, is a ruggedly handsome and powerful entry in the carbine class. Springfield’s re-interpretation of the venerable M1A will appeal to many. However, its versatility is limited by a few factors.

The SOCOM differs from its full-size predecessor in a few ways. Most notably, the barrel is 16.25 inches, compared to 22 inches on the Standard M1A, but from butt to action, the two models are the same size. The SOCOM also features 4-inches of Picatinny rail on top, plus a tactical style front sight/flash suppressor unit.

Springfield managed to strike a perfect neo-classic balance with the standard M1A frame and a nice selection of choices for the composite stock including black, OD green, flat dark earth and multicam. The modest rail and muzzle brake give an updated appearance while not detracting from the design.

It’s equipped with practical iron sights. The rear ghost ring aperture sight is adjustable for elevation and windage, and for those with great eyes or reading glasses, there’s a tiny scale to gauge windage. The front sight post has a tiny tritium insert, adding modern convenience to the gun without detracting from its appearance. The night sight is sufficient to confirm front sight on center mass at typical indoor, home-defense distances. 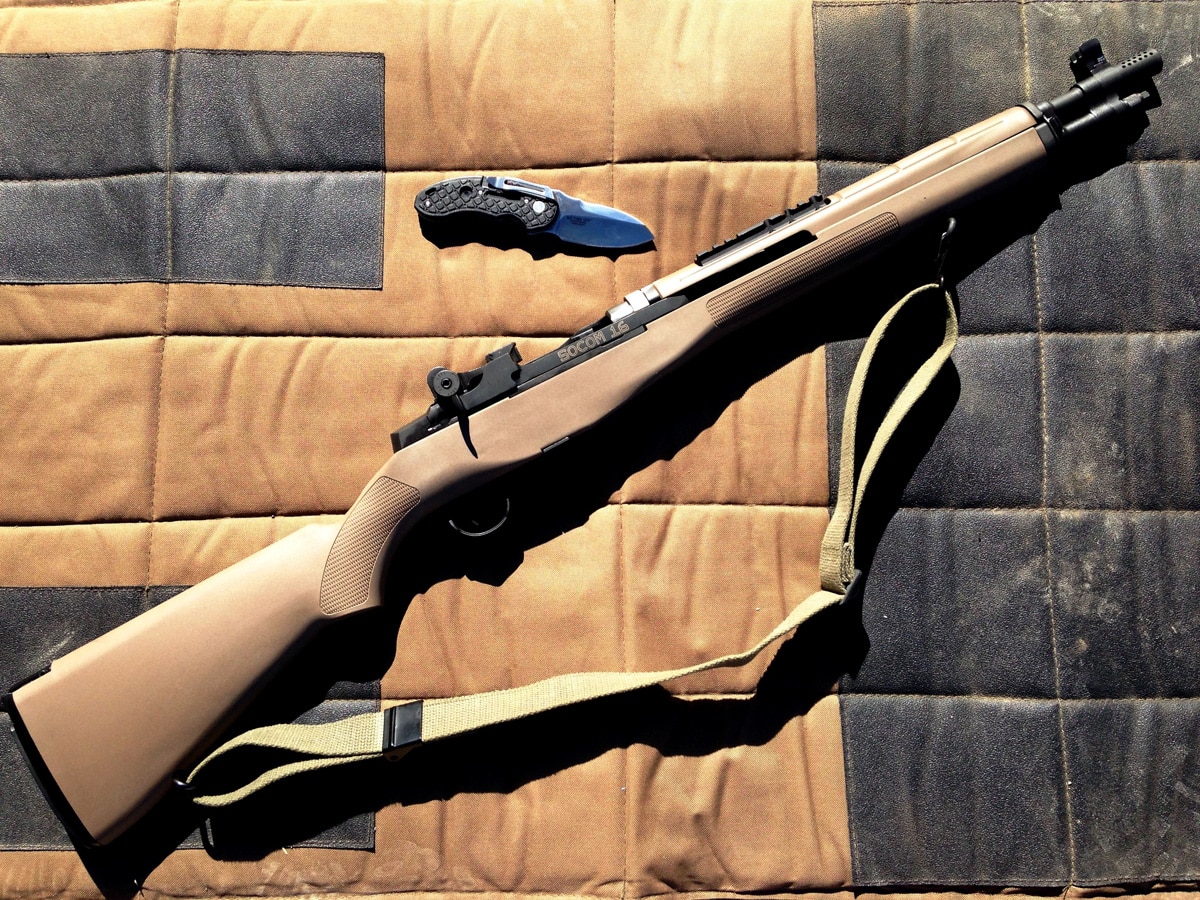 With the trigger there is no gravelly crunch or excessive slack on the 5- to 6-pound pull. Reset is short and crisp—in fact, we confess we had an unintentional “flyer” during accuracy testing, so light is the touch required between reset and following shot.

It sounded too good to be true, reading that SOCOM’s muzzle brake substantially reduces recoil — but it does. Felt recoil is comparable to a 7.62×39. The muzzle brake also imparts an impressive, roaring report to each shot (think Harley Davidson vs. rice-burner noise) whilst recoil is soft enough to shoot all day. 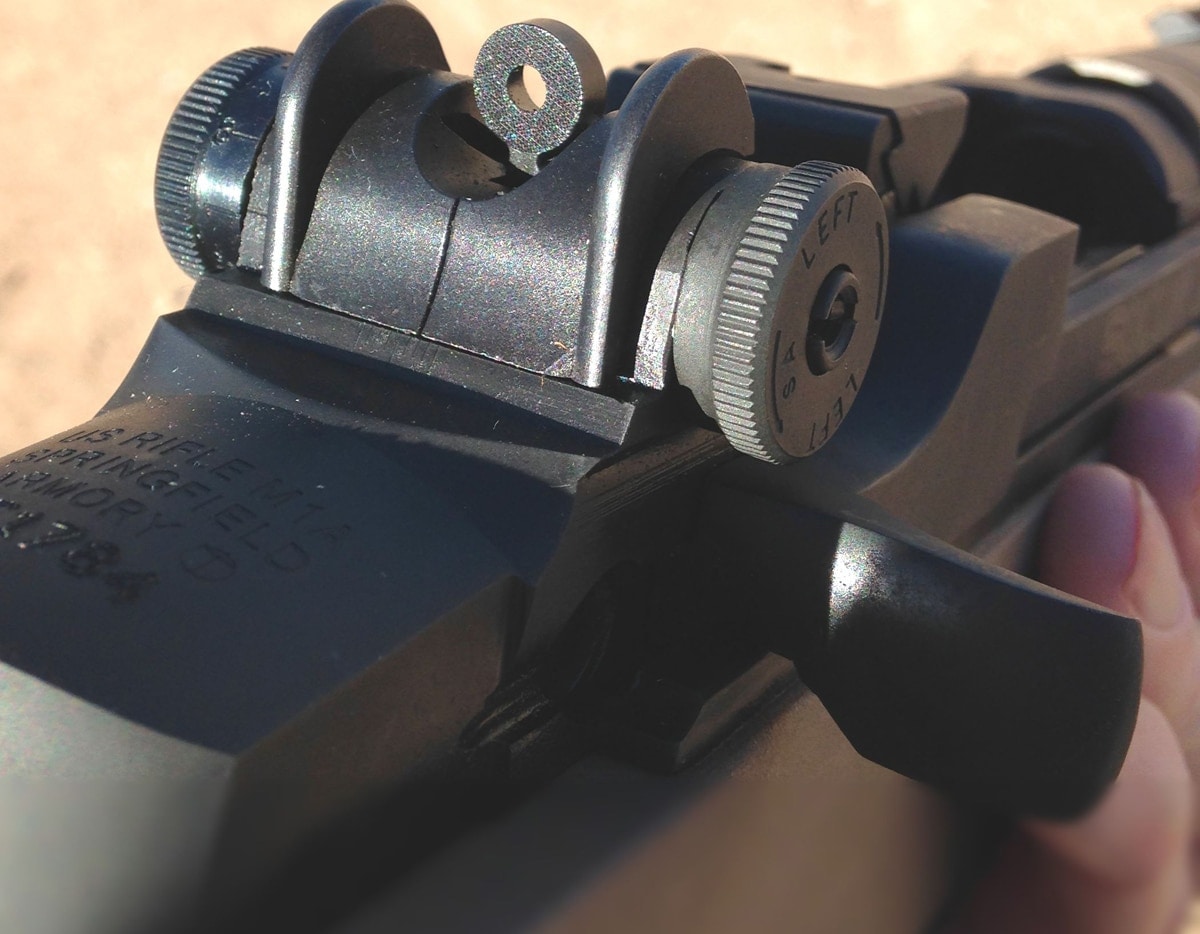 Carbines were never intended as precision or long-distance guns (though many companies have made impressive strides in making them so, and hats off, but this isn’t about them).

Out of the box, the SOCOM, shot from an improvised bench and loaded with match-grade ammo, made a group of approximately 2.5 inches at 50 yards. It would’ve been better with a more stable platform, but this gives a general idea that shooters wanting extreme accuracy should not expect it from this rough-and-ready carbine with its 1 in 11-inch twist barrel.

Also, the barrel is perfectly weighted, and in turn minimizes fatigue and allows delivery of practically any number of shots with so-called combat accuracy.

The magazine was the only real hiccup. In an age when most manufacturers are adding value to new guns by including accessories, Springfield Armory puts itself in the chintzy department by including one lonely, 10-round parkerized steel magazine. It was annoyingly difficult to seat at first, and needs to be rocked into place, fore-end first, not unlike installing an AK magazine. 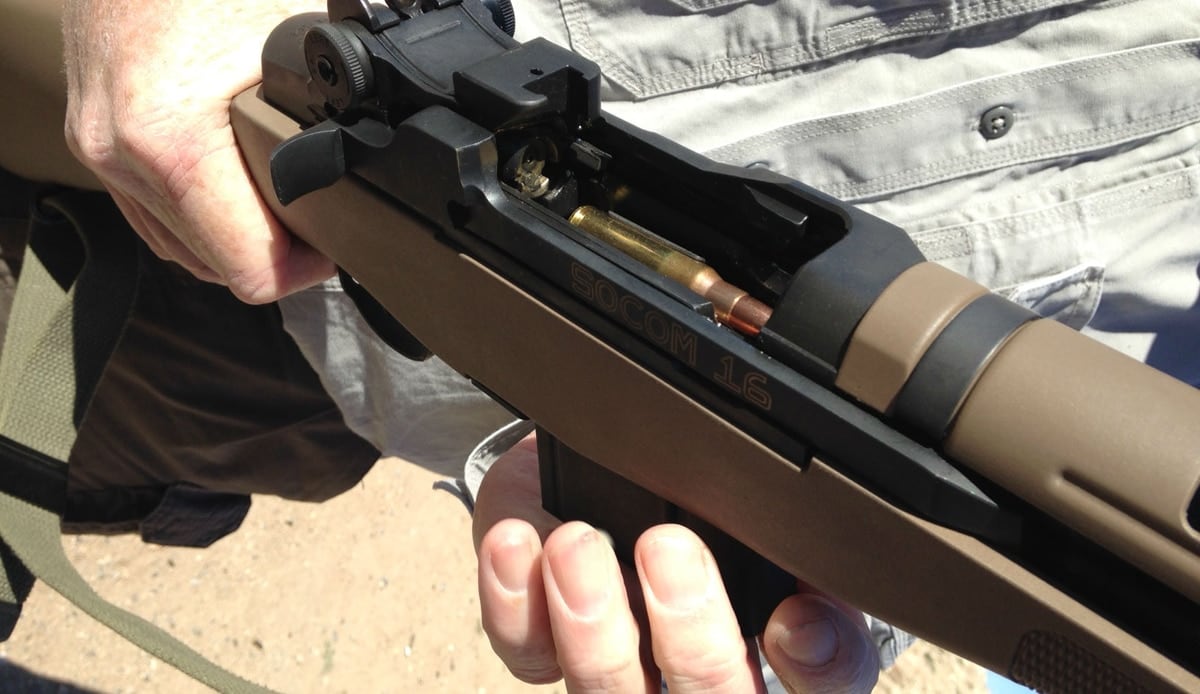 Around the 40-rounds-fired mark, the mag seemed to break in (or perhaps I had sufficiently gouged a path into the composite stock), and seating it became easier, but not smooth. A 20-round factory mag, normally used in a traditional M1A, seated and worked about the same. 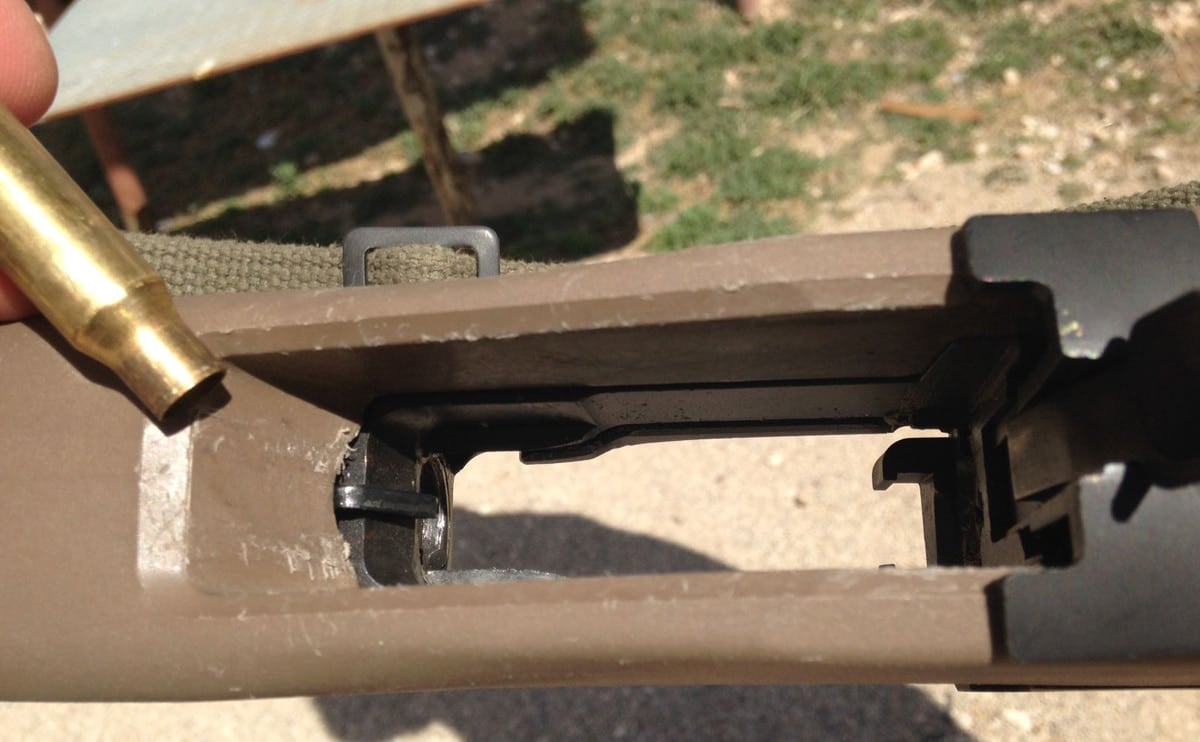 And in the process, the interior of the magazine well was gouged a bit. (Photo: Eve Flanigan)

Despite some difficulty with mag insertion, at no time during this trial did the SOCOM malfunction. It ran four different brands and weights of brass-cased FMJ and HP ammo without flaw.

Springfield Armory makes the following ammunition recommendations for this model: no steel-cased; no soft point or light magnum rounds; 110- to 180-grain ammo but 165 grain recommended as perfect; and new commercial ammo (brass) or NATO spec.

If a carbine is all you want, there are smaller calibers and smaller prices out there. At $1,909 retail, the SOCOM is above the price range of many shooters. Same goes for ammo — the low average price of brass-cased .308 FMJ, as of this writing, is 78 cents per round. JHP is in excess of $1/round. While the SOCOM is fun to shoot, few will look forward to plinking at that price.

The M1A SOCOM will find fans among lovers of the carbine who want more power than an AR-15 or AK-47. It allows for installation of modern optics without sacrificing classic looks. The soft recoil and locations of the safety lever and ejection port make it comfortable for virtually any shooter, regardless of stature and whether right- or left-handed. The SOCOM is fun, dependable and for those who can afford it, practical for personal defense where over-penetration is not of concern, as well as short-to-mid-range hunting applications.