Often referred to in the shooting industry as “the best kept secret,” Tikka clearly wishes to be a secret no longer.  Unveiled at the 2016 NRA Annual Meetings, Tikka’s T3x has been all the rage with Beretta/Sako/Tikka fans.  Tikka rifles are manufactured in Finland by Sako under Beretta holdings, and the T3x represents the company’s biggest product overhaul in a decade. 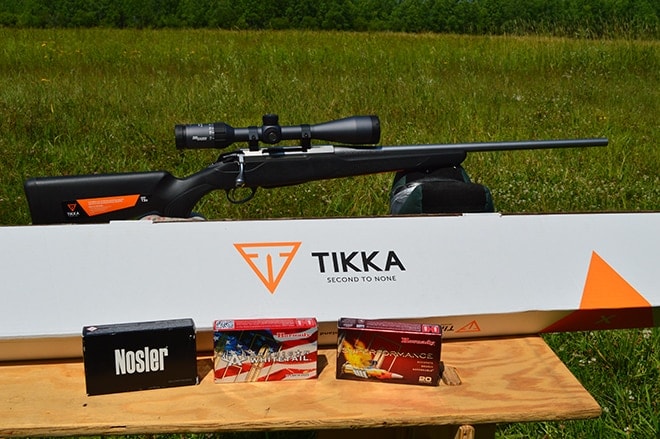 The T3x rifle was finalized after years of “suggestion gathering” from owners and shooters of the original T3 rifles.  Carrying the tagline “a new era of accuracy,” customization is a main focus, with options in multiple calibers, barrel lengths and styles.  The modular grip features a new asymmetrical pattern and ergonomic shape, and the existing synthetic grip can be swapped for a vertical pistol style. Similarly, the forend can be switched out for a wider profile front end. 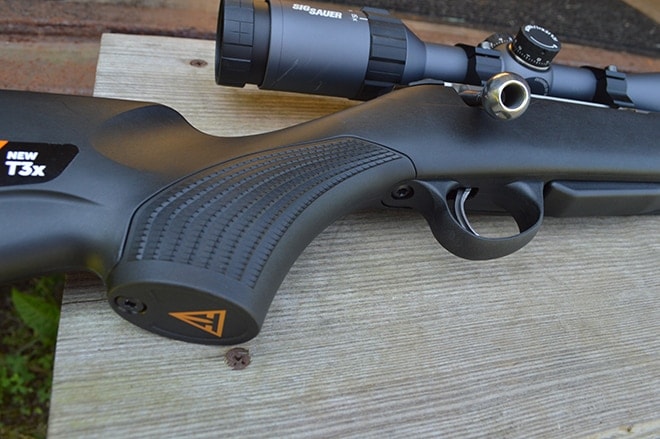 There are synthetic, wood, and laminate stocks, threaded and fluted barrels, blued and stainless, left and right-handed models. Other new features include a foam-filled synthetic stock to aid in both noise reduction and vibration, an improved metallic bolt shroud, and a larger ejection port for easier hand-feeding.  In addition to the improvements, Tikka has also joined the 6.5 Creedmoor chambering party, offering several T3x models in the popular long-range caliber. 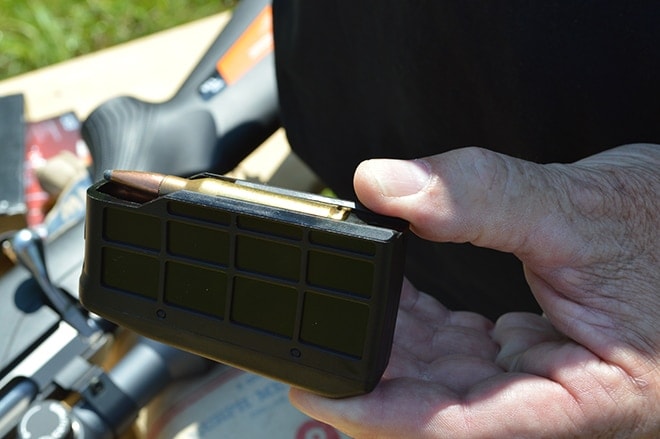 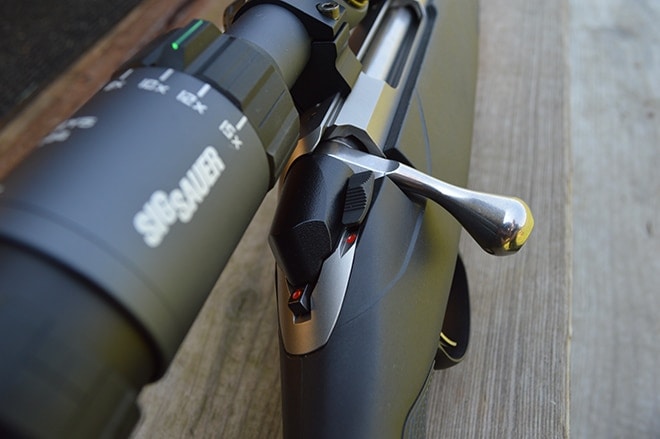 While retail prices for the full gamut were not readily available at the time of publication, our test T3x Stainless Lite is listed at $850.  Rafe Bennett, VP of Product Marketing for Beretta USA, says the T3x platform “gives our customers an excellent gun at a very attractive price and in a model for nearly every shooting sport.”  As we see it, Tikka is a nice melding of Beretta and Sako technologies at an accessible price point. 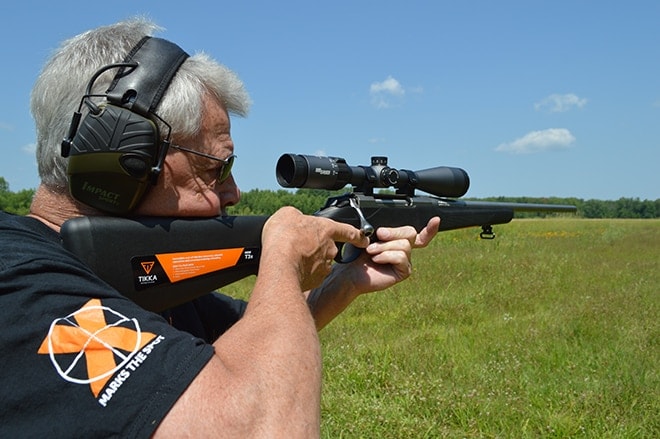 Our test rifle was the Stainless Lite chambered in 7mm-08.  With the metal parts made of Sako’s high-grade stainless steel, this is a sturdy and long-lasting choice for all weather conditions.  The detachable, single-stack polymer magazine holds three rounds.  It has a 9.5” rate of twist with four grooves in a 22” length barrel.  The Stainless Lite, like most of the other T3x’s, is available in either right or left handed models. Weight on our test gun sans scope was just under seven pounds with an overall length of 42.5 inches.  The standard factory trigger broke regularly at 3lbs-14oz pounds and was clean and crisp.  Like the majority of the T3x rifles, ours came with a single stage unit adjustable from two to four pounds. 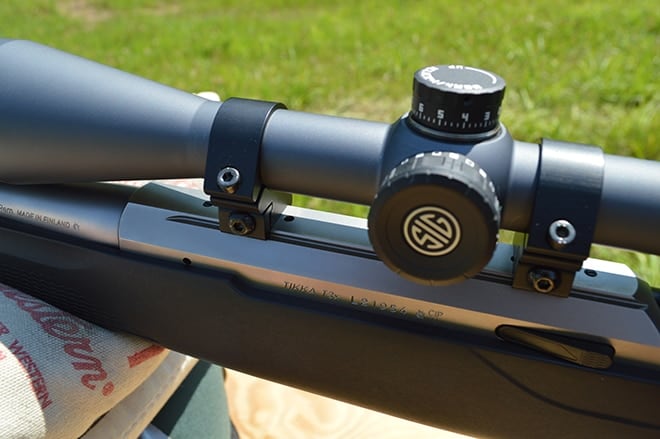 We mounted a Sig Sauer Whiskey5 3-15×44 scope for testing, and the combo proved to be an accurate and sharp looking one.  The T3x’s improved rail mounting system includes not only grooved receiver rails, but also has extra screw placements for solid attachment of a picatinny rail, especially useful for today’s larger optics. A short bolt throw also negates potential issues with scope clearance. 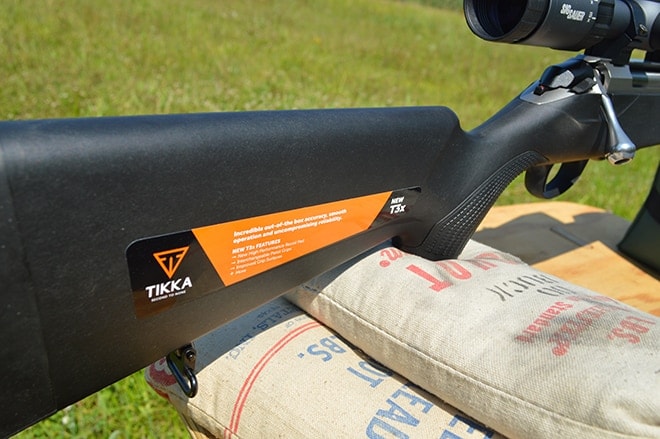 Our test Stainless Lite wears the flagship T3x black synthetic modular stock.  That means it allows for interchangeable pistol grips, making it possible to modify the angle of the grip to accommodate various shooting positions and shooter dynamics.  Additional grips are sold separately, though we would like to see one included.  Though our setup was completely modular, we felt comfortable with the gun as-is out of the box, but having options down the line is always nice. 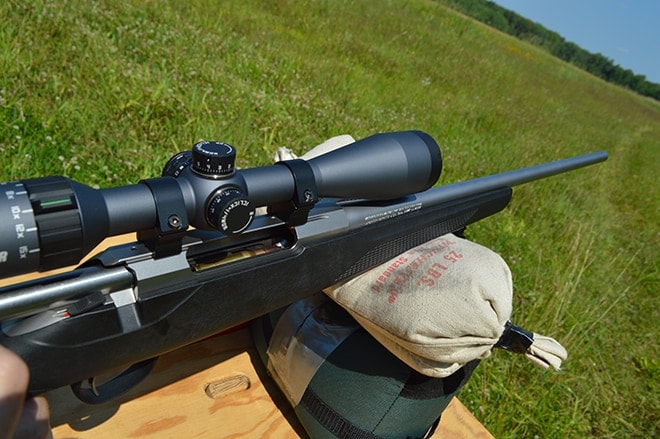 Tikka advertises that all T3x’s come with a robust recoil pad to tame the kick, but as our test 7mm-08 chambering has very little recoil to begin with, it was difficult to judge.  For what it’s worth, the pad feels “robust.”  The rifle was a pleasure to shoot in accuracy, low-recoil, and comfort, and as such would be ideal for anybody from a new or smaller-framed shooter all the way up to the most accomplished hunters. 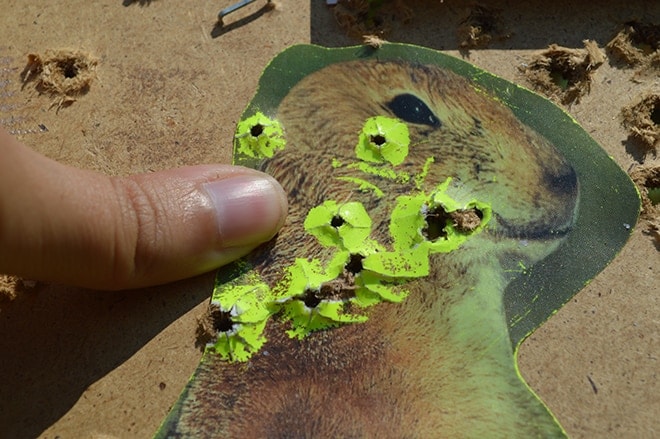 Though not generally a fan of synthetic stocks, this one felt solid and sound due to Tikka’s foam-filling.  Likewise, all hand-grip areas are plenty aggressive, a fact not lost on a rifle built primarily for hunting in inclement conditions.  One of the other big pluses with the T3x’s is the steel recoil lug in place of more common, and cheaper, aluminum inserts. According to Tikka engineers, “Compared to aluminum, the steel lug doesn’t have strong imprinting qualities that would cause deformation when larger calibers are used.” 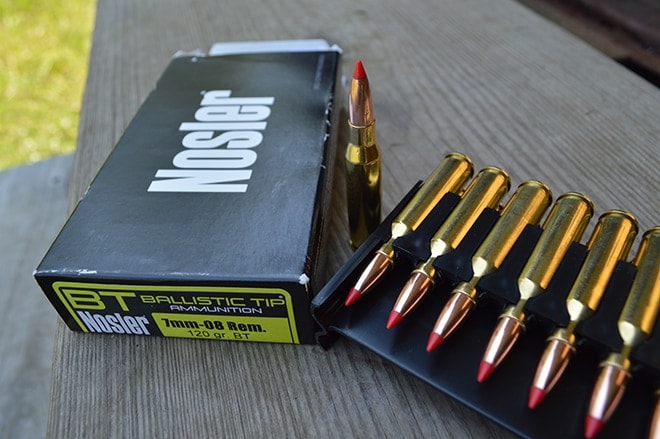 Our test T3x Stainless Lite performed admirably during field testing.  For ammo, we had a nice selection of 7mm-08 rounds geared for whitetail-sized game: Nosler Ballistic Tip 120grn BT, Hornady Superformance 139grn SST, Hornady American Whitetail 139grn SP, as well as commercial reloads.   With minute of angle accuracy expected out of the box, the T3x did not disappoint.  Our best three-shot bench groups hung between 0.85-1.0” at 100-yards with the best groups a tight tie coming from both Nosler Ballistic Tip and Hornady Superformance.  Repeatable field accuracy was best with the 139 grain bullets, however, and the Hornady’s American Whitetail looks like a very viable hunting option for the 7mm-08. 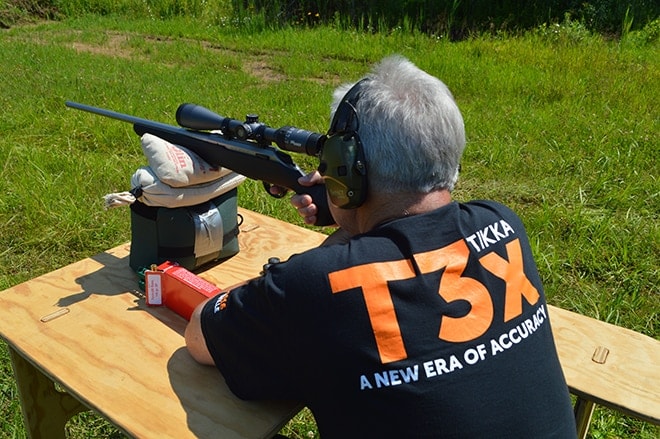 Though we have long been fans of Tikka’s initial line of T3 Hunter rifles, we did not find too many shortcomings with the intial rifle for the T3x to have improved upon.  Regardless however, the new T3x is a solid, accurate, more modular rifle in an even wider range of options and calibers than the original.  Whether you’re a stand-hunter, stalker, varminter, or tactical shooter, the T3x line has you covered.