The gun world takes notice when the US military adopts a new firearm, particularly when it comes to new service pistols. In the spirit of the Army’s recent adoption of the Sig P320 automatic pistol, I decided to take a look at one of the United States’ first service handguns. For that we have to rewind to 1860 with the adoption of the then brand new Colt 1860 Army pistol — a 44 caliber percussion revolver that was space-age compared to its predecessors. The adoption could not have come at a worse time, as South Carolina left the Union in that year. The American Civil War (1861-65) was just around the corner.

Colt’s 1860 Army revolver owes itself in large part to metallurgical technology advancing at speed in only the previous ten years. Colt’s revolvers of that time were made of wrought iron, which had obvious pressure limits. Colt found success with their 1851 Navy, a belt sized gun in 36 caliber, but the large 44 caliber bore required by the US Army at the time for use on both horses and men could only be contained by very large handguns, like the five pound Colt Walker and the only slightly lighter Colt Dragoon series of handguns. These handguns could not be carried on a belt and had to be carried on pommel holsters on a horse’s saddle. 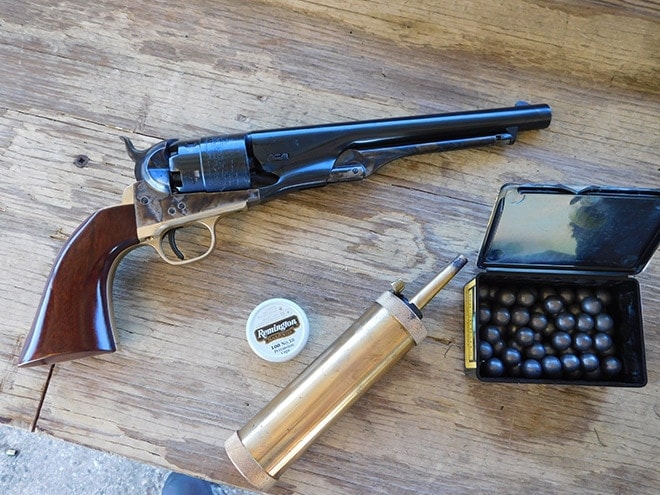 The Bessemer process was soon to change all that, using air to remove iron impurities. This a complicated process, worthy of its own article, but the skinny is that steel manufacturing suddenly got cheaper and easier. Colt was among the first to harness one of the new steels — silver steel — to produce firearms. First up, a belt size 44 caliber pistol was on the agenda, but where to start?

Colt found their way by taking the 1851 Navy grip frame and cutting it for a Navy cylinder belled out at the end for a .44 caliber chambering. Slap on a 44 caliber barrel and you suddenly have a belt carry-able .44 caliber pistol. Throw in a more efficient rack and pinion loading lever and a more economical round barrel and you had a pistol that boasted the Colt Navy’s carry ability with .44 caliber killing power, made more cheaply than before all while being half the weight of the previous Colt Dragoon pistols then in Army service.

Quite a few original Colt pistols are still out there to be owned and shot, but for the money a good replica by Uberti is the best bang for your buck.

When I received my Uberti Colt from Taylors & Company, I was struck at the build quality. The gun boasts a feel, look, and operation like the original. Like the original, the gun weighs only two pounds, 12 ounces — just over half the weight of the Colt Dragoons the gun replaced in service. 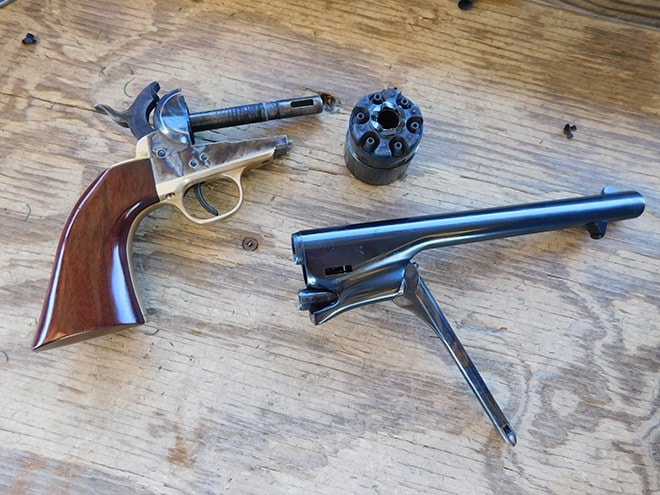 The Colt 1860 breaks down by tapping out the barrel wedge and pulling the gun apart, literally. (Photo: Terril James Herbert)

Operationally, the Uberti Colt 1860 is a single action pistol, requiring manual cocking of the hammer for each shot. The gun’s lock up is tight and the timing is right on out of the box.

Aesthetically, Uberti’s 1860 Army features the same round eight-inch barrel with a case hardened creeping loading lever underneath. The barrel is attached to the frame via a central arbor and held in by a spring-tensioned wedge that may be tapped tighter or looser to get the desirable cylinder gap. The gun’s sights are typical of that of any Colt revolver of the time: a diminutive rear notch ground into the hammer nose and a front blade sight. 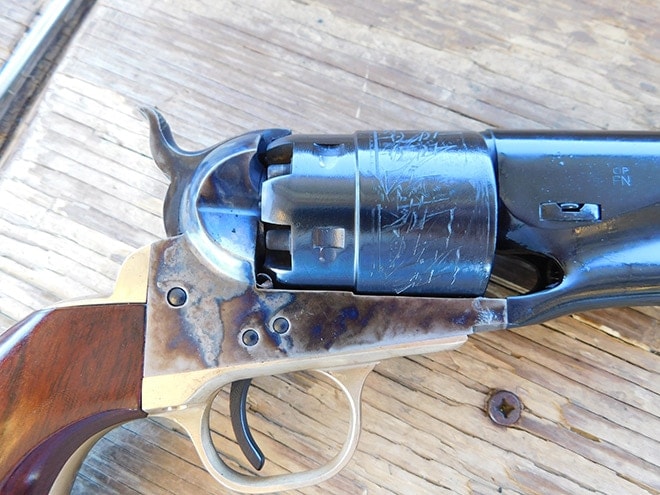 The Colt 1860’s stepped cylinder and frame. This, along with better metallurgy allowed for a true 44 caliber belt pistol. (Photo: Terril James Herbert)

The heart of the gun — and the reason for its prominence — is the distinct stepped cylinder. The cylinder has a naval battle scene roll engraved on it. This engraving looks so well executed it somewhat takes away from the fact that something so ornate was once standard issue. The grip frame is brass and houses a single piece walnut grip. This grip is somewhat longer than the classic 1851 Navy grip but it has the added benefit of easily fitting large hands like mine

My sample Uberti Colt 1860 came tight as a drum and ready to shoot, so I dug up some .457 inch Speer lead round balls and some of my own home cast 200 grain .450 inch Lee conical bullets. For propellant, I opted for my usual Graf & Son’s 3F black powder and Remington No. 10 percussion caps for ignition.

My load throughout testing consisted of 30 grains of powder over either the conical or ball. This charge over a 216 grain conical bullet was standard issue ammunition with these pistols during the American Civil War. This load, though not maximum, offers quite a bit of power yet keeps recoil well under control. The .457 inch ball is quite oversized and it takes a bit more effort to seat. A .454 inch ball would probably work just fine, but a tight oversized ball is what prevents chainfires and enhances power and accuracy. The loading port also accepted my conical bullets though they required a bit of starting before rotating the cylinder under the rammer.

*Velocity denoted in feet per second with an average of three shots used. 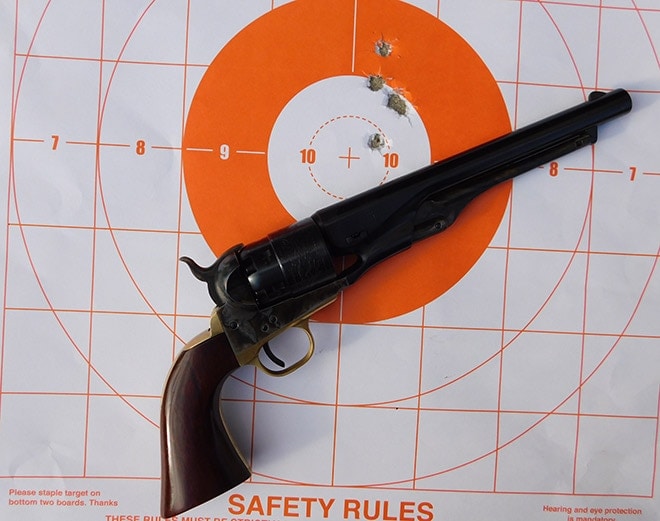 This 2.5 inch group shot at seven yards is exceptional especially since the sights are nothing to write home about. (Photo: Terril James Herbert)

Whether you are using paper cartridges or loose components, loading the Uberti Colt is to say the least a learning experience. Most of my shooting was done with loose powder and ball. Pour your premeasured charge down each chamber while the gun is at half-cock, put a projectile over the chamber mouth, rotate under the rammer, release the rammer, and push the bullet down until it stops. Repeat until all cylinders are charged. Add a dab of grease over the chamber mouths for lubrication of the projectile. Turn the pistol around and cap each nipple.

Drop the hammer on an empty chamber or ease the hammer from the down position to rest it on a cylinder pin. All you have to do now is draw, cock, and shoot.

The Colt 1860 fits like a glove in the hand and the pistol points naturally despite the long, eight-inch barrel. Cocking the hammer for the first shot revealed the rear notch sight. Though it can be difficult due to their very small size, lining the sights up isn’t such a bad process. The small size does however allow for a more precise sighting arrangement.

The mere thought of pulling the trigger discharges the gun — the single action trigger pull came in at just over three pounds. After six discharges and a heap of thick, white smoke I was rewarded with six holes in the target from seven yards away, all within four inches. Excellent combat accuracy with one paw. I just had to be mindful that when the gun is cocked spent caps come flying left and right. 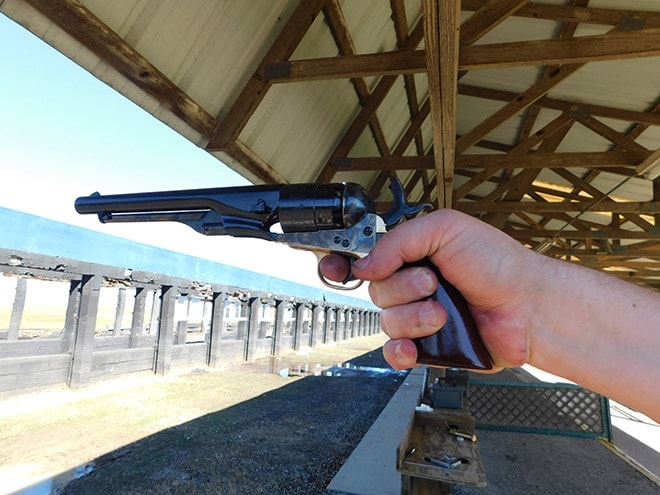 A less experienced shooter using two hands and plenty of time managed to shrink that group down to two and a half inches. Recoil was moderate and the Navy-like grip makes the pistol roll up in the hand, instinctively leveling your thumb with the hammer to cock for the next shot. The gun’s loud bang and puff of flame and smoke makes the pistol look more violent than it is.

Despite the reputation of these percussion revolvers, the Uberti Colt shot to the point of aim with no high shots at all. Hitting steel out to twenty-five yards was met with a satisfying ring, despite this .44 not packing much wallop by today’s standards.

I admit that I had some misgivings about shooting the Colt 1860, unmodified. These pistols are not as well finished as original Colts when it comes to the internal parts and they tend to suck caps into the action when cycling the gun. To my amazement, I did not need to polish the hammer face or install special nipples to solve this problem. 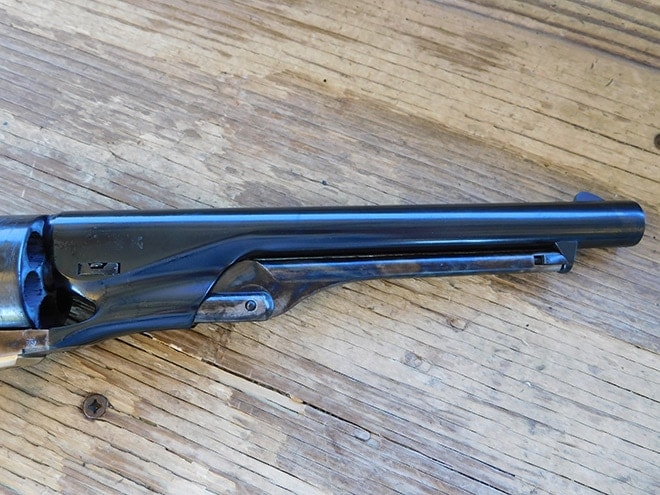 The rack and pinion loading lever is an improvement over the previous hinged arrangement. (Photo: Terril James Herbert)

Colt revolvers were extremely popular back in the 19th century because their open mechanism could take a lot of black powder fouling. When a black powder gun touches off, the powder leaves a lot of unwanted traces of itself behind. The hammer gets harder to cock and the cylinder on a revolver won’t turn as free. Soon enough you will be beating the gun open to get it taken apart for cleaning. The Colt got tough to operate at about sixty shots and required taking down and a quick wipe of the rag to keep on trucking. But getting to sixty shots is amazing, even though religiously using wads or grease over the chamber mouths would have surely extended that number.

I admit to being a Remington aficionado — and I find the Colt’s open top design to be somewhat antiquated — but coming away from shooting Remington’s main competition has left me with mixed feelings.  The Colt 1860 did not have the mechanical strength of the Remington New Model Army nor the fast double action firing capability of the Adams, but the Colt was inexpensive to make, extremely durable, and could eat fouling like a champ. It was a reliable, lightweight handgun that packed a horse-killing punch.

The Army got the best bang for its buck. True then and still true today.

On the civilian side of things, Uberti is also giving a pretty good bang for the buck by bringing this legendary pistol back to market at a price everyone can afford (around $350). The guns are infinitely stronger than the originals so you don’t have to feel bad about shooting one. All without neglecting a nod to our past.