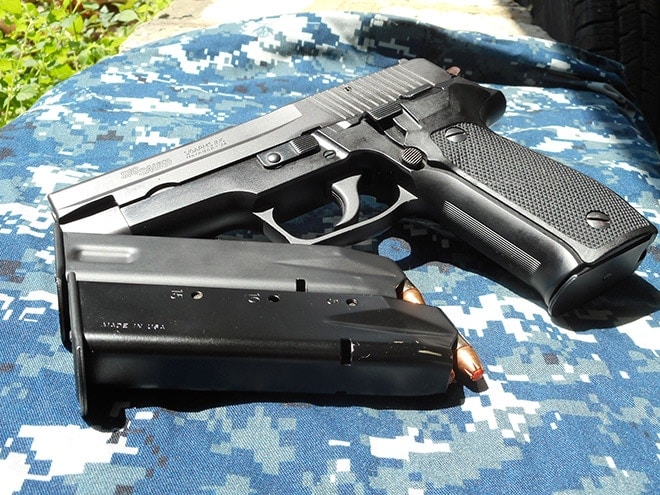 It’s time to take a trip down to the local gun store and peruse the wares. While your desire to own a new firearm is at it’s peak, the same cannot be said of your bank account. You have money. The problem is you don’t have enough money for what you really want sitting in the new pistol case. So you decide to swallow your pride and browse the used case. Smart buyers know that unexpected treasures can be found in this case, often at half off their MSRP. The Sig Sauer P226 is the reason you should always check the used case. 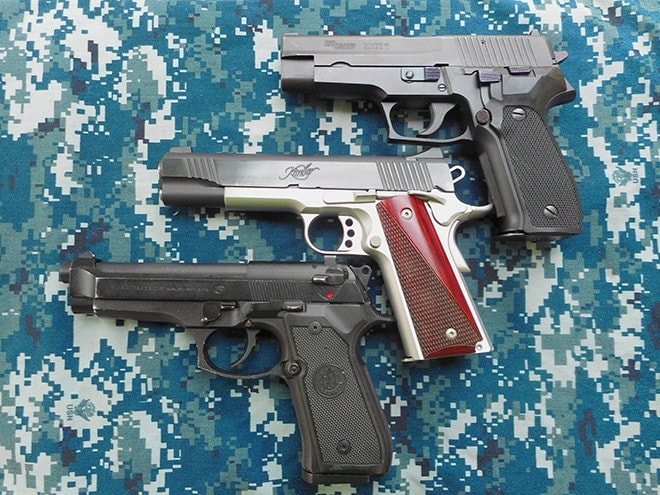 The Sig Sauer P226 is based off of the older Sig P220. The primary difference is a much larger double stack magazine when compared to the P220’s single stack. It was originally developed to be entered into the US Army’s XM9 trials and made it to the very end, eventually losing out to the Beretta 92F. Undeterred, Sig Sauer began to offer the design around the world and it has since become a favorite of civilians, law enforcement, and militaries worldwide. Most famously the US Navy SEALs adopted the pistol after a rather nasty break-up with Beretta. No one can say the P226 is an unproven design with it’s track record and reputation.

To this day many will say that this should have been the pistol to win those trials. I feel that if it had won, it would receive the same level of criticism the Beretta M9 does simply because it had the misfortune to replace the M1911. 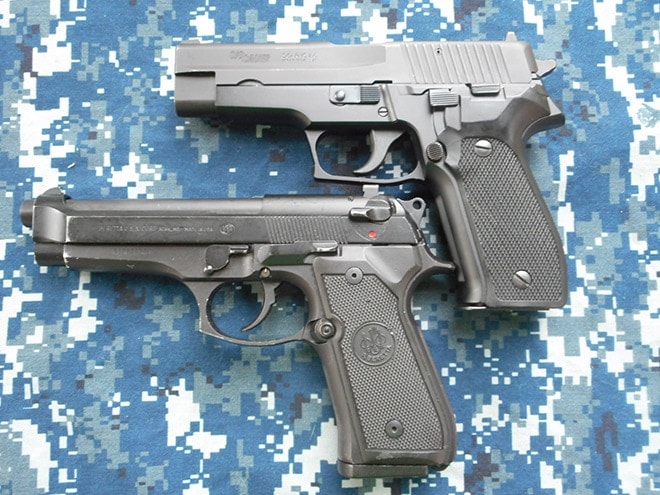 This P226 was made in West Germany, during the heady days of the Cold War. That should be a selling point to anyone with an interest in Cold War history. It also goes to show the differences in thought in arms design between East and West. In Warsaw Pact nations, service pistols of the time were all essentially clones of the Walther PP or the FN 1903 — when they hit upon a design that worked for them, that was basically it. In the West, we had companies competing against one another to produce a better product and from that came the P226. Today, no one argues that the Makarovs of East Germany are superior to the P226 of West Germany. 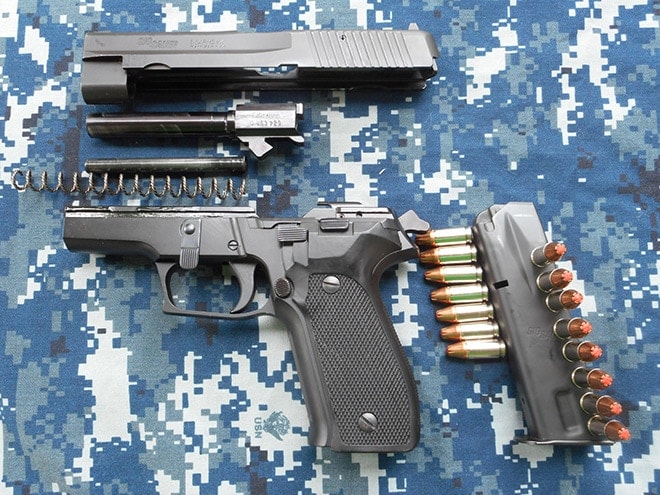 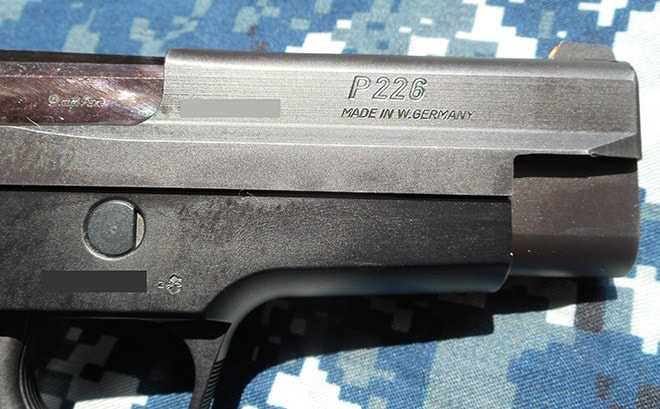 As mine is an older P226, it’s worth mentioning that the design of the slide was considered truly innovative for it’s time. The slide is made from stamped sheet steel, with the breech block brazed into place and secured with a roll pin. The frame is also made from an aluminum alloy. With the advent of hotter cartridges such as the .40 S&W, manufacturing switched to a milled steel slide. While it’s certainly not a lightweight pistol, it’s no hand cannon.

The P226 is equipped with a de-cocker rather than a manual safety. The first shot is a heavy double-action pull and follow up shots are with a crisp single-action trigger that feels to be around three to four pounds. 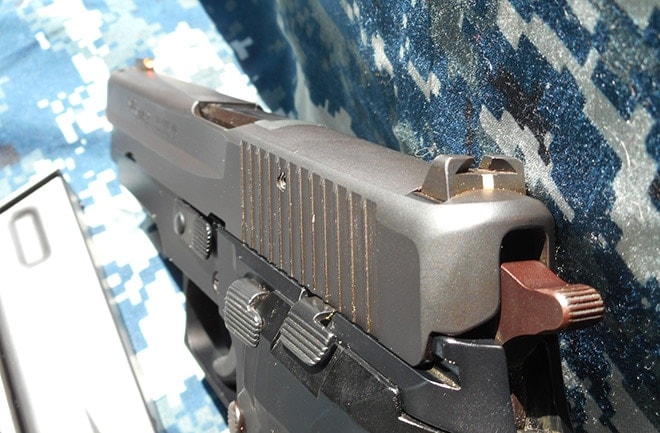 Many people today will tell you that it is impossible to shoot a DA/SA handgun accurately because of that first heavy trigger pull. To them, I say there is a “secret” technique to shooting a DA/SA handgun accurately: First, ignore those voices — you don’t need negative waves in your life. Second, go to the pistol range and practice. Practice often and you’ll discover that it is possible to shoot accurately with this pistol. Practice, practice and practice some more, and you’ll learn that you can bring in tight groups with this pistol. 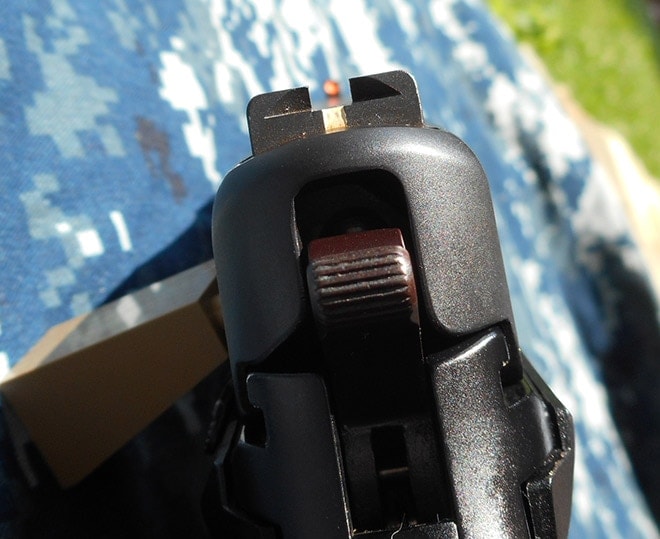 The grip frame of the P226 is rather large due to that double stack magazine. Though it does fit in my hand rather well, I can see shooters with smaller hands having trouble. The controls of the pistol are all placed within easy reach of the shooter’s thumb, whether it’s the de-cocker, slide release, or magazine release. The iron sights are what’s nicknamed “dot-the-i”. The rear sight has a white line under the notch, and a white dot on the front sight. Are they better or worse than three-dot sights? I really have no preference, but many do and some may prefer this style. 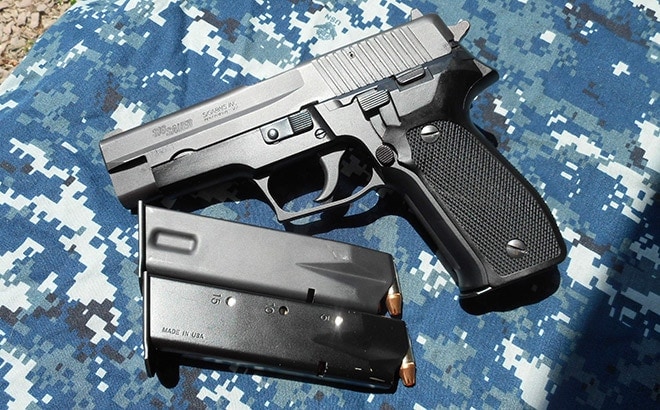 Yes, most people prefer to buy new. Fact is, a lot of us don’t always have deep enough pockets to do so and sometimes we have to hit up the used case. When buying used, always remember to inspect the gun before purchasing for defects, and remember that many of these guns are out of production. That means it can be hard to find spare parts or magazines. Luckily Sig Sauer seems to be in no hurry to stop P226 production and parts, magazines, and accessories are everywhere for this beloved handgun.

Yes, it is an older handgun. Yes, it lacks a rail or night sights which many expect on handguns these days. However, it is a classic and reliable design with a proven reputation. MSRP for a new P226 is $1,015. This was picked up for $479 with two spare mags. I got a bargain and it’s an example of the hidden treasures just waiting for you to find in the used case.