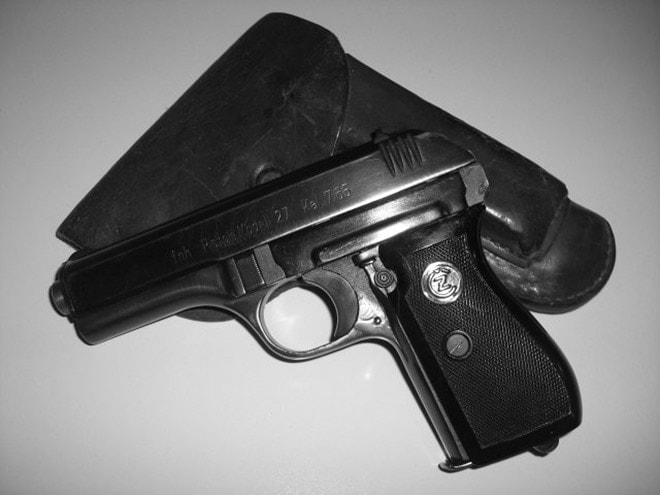 A German production Model 27 (vz. 27 or more commonly Cz-27) and a stamped German issued holster. This pistol carries a WaA76 German acceptance stamp and bears the slide legend “fnh Pistole Modell 27 Kal 7.65,” which show that it is a later German production version.

The establishment of Czechoslovakia at the end of the First World War not only created a new country, but, for the leadership of this new republic, a number of pressing problems. First among these was the new Czech army.

It seemed clear that, in order to maintain their independence, a strong army would be required as well as a self-sufficient arms industry to supply and equip it. The current array of military equipment on hand was impossible to support, so a general standardization plan became one of the first priorities. As part of this, in 1920, trials were held to select a new pistol for the Czech military which currently used an array of old revolvers, Austrian Model 07 and Model 12 semi-automatics, and Hungarian Frommer Stops.

A number of designs were submitted by newly formed Czech arms companies. Two were selected for additional trials and in the fall of 1921 the 9mm Parabellum design by Josef Nickl was accepted. The first batch of 2,700 pistols followed not long after, but several design changes and slow deliveries forced the Czech military to purchase 15,000 German Ortgies and several thousand surplus Dreyse pistols as a stop gap measure. 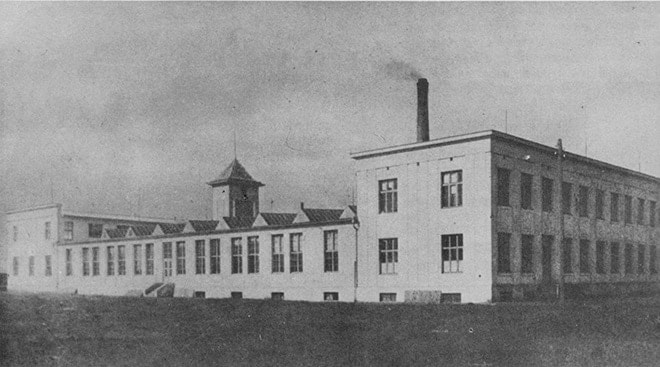 By 1924 the modified Nickl pistol, designated Model 24, began production at the Ceska Zbrojovka (CZ) plant in Strakonice. Built in 9mm short (.380 acp) the sidearm was accurate and well-balanced and, not surprisingly, reflected elements of an earlier Nickl design that had been rejected by the German army during the First World War.

The military declared the Cz-24 a success and quickly placed an order for 100,000 units to be delivered over the course of 5 years (1924-1928). Delays plagued the contract and it would not be until 1931 that the order was finally filled by CZ. Part of the problem concerned the new plant’s ability to operate at such high production levels, while another problem concerned the pistol design itself. 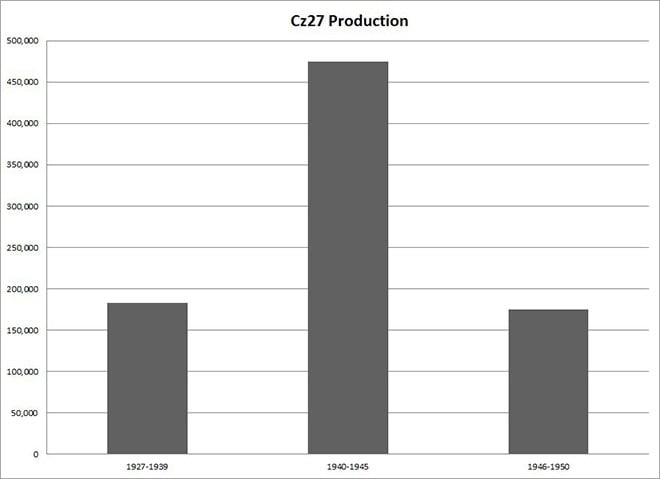 The original design had been for a 9mm Parabellum round and, as such, the Cz-24 employed a semi-locking bolt and a short recoil action where the barrel rotated as part of the rearward movement. The problem was that changing the caliber of the design to 9mm Short meant that this feature was an unnecessary and now nothing more than a manufacturing complication. 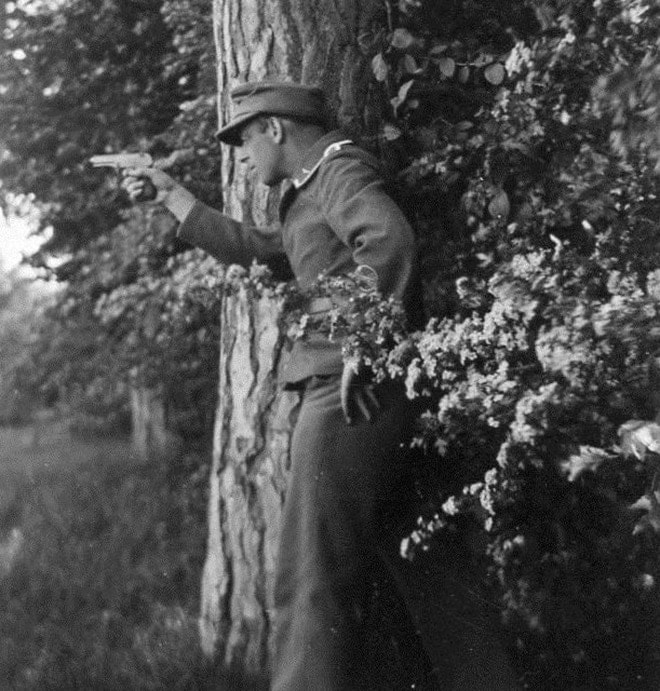 A German Luftwaffe Sergeant takes aim with a Cz-27.

Realizing that the pistol could be redesigned in a simple blowback action, CZ engineer and designer, Frantisek Myska, began work on a 7.65mm (.32 acp) version. The result was the Model 27 or vzor. 27 or, as it is more commonly known in the West, the Cz-27. The eight-shot pistol retained the earlier look of the Cz-24 but cost about half the price to produce. The new sidearm was issued to police, security units, and border guards, as well as being sold on the commercial market. 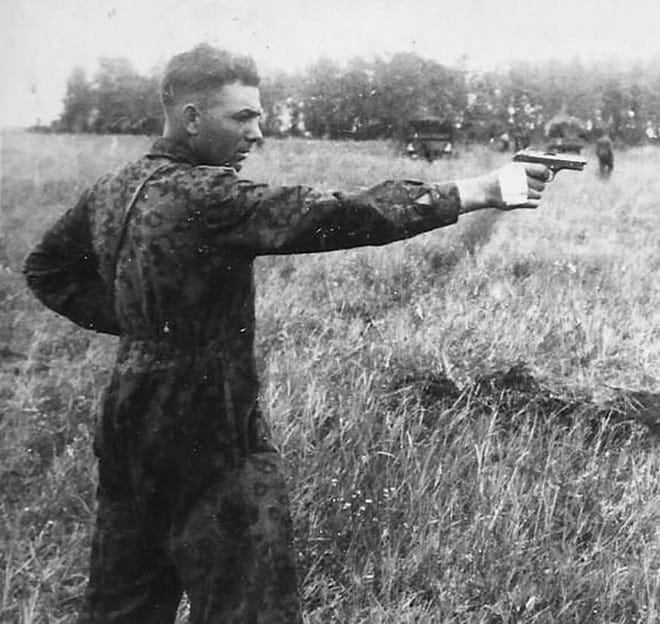 Beyond questions concerning the stopping abilities of its round, the Cz-27 was well liked. The sidearm proved durable, and had an unmistakable snappy retort upon firing. From its adoption in 1927 to the German occupation of Czechoslovakia in 1939, approximately 183,000 units were produced.

When Germany secured the country in 1939 the entire Czech arms industry was put into motion. The German army for instance, satisfied with the Czech LT-38 tanks, incorporated them into Panzer regiments under the designation Panzerkampfwagon 38t. Pistols were no exception to this rule. The Heereswaffenamt (German Army Weapons Office) examined the Czech Cz-27 and, liking what they saw, ordered Ceska Zbrojovka to continue producing the sidearm. The CZ plant at Strakonice was renamed Bohmische Waffenfabrik AG and production was restarted on the pistol which was given the German designation Pistole Modell 27. 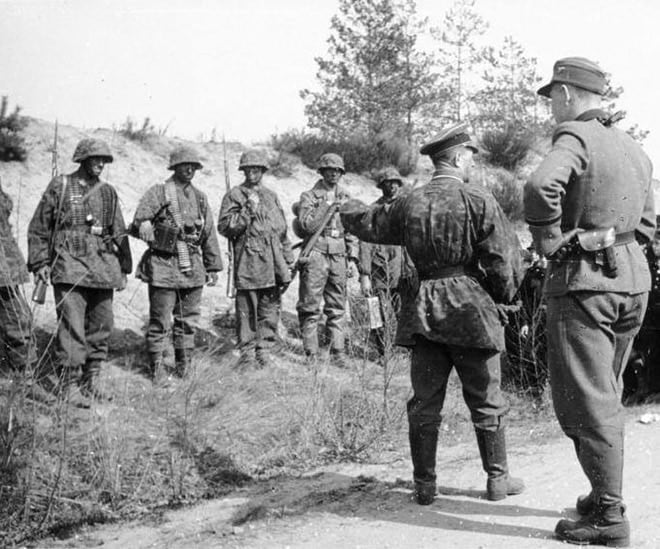 Panzer Grenadiers from the 12th SS Panzer Division in the spring of 1944. The officer to the far right appears to be carrying a Model 27 holster. This division would see heavy fighting in France as part of the German attempt to contain the allied landing, and again in December as part of the German Ardennes offensive.

In the 13 years before German control the average monthly output of Cz-27s was just over 1000 per month, but with the logistical pressures of the Second World War the Strakonice plant’s output jumped to over seven times that number. In all, 475,000 units were produced under German direction before the American army took control of the Strakonice factory in May, 1945. These sidearms were primarily issued to security forces and police units, with reports that the Luftwaffe and Army also employed the pistol as an acceptable substitute.

Upon the conclusion of the conflict the company quickly returned to its old name and to production of the Cz-27 as well. The Czech government ordered 45,000, which were produced in 1945 to 1946. In the late 1940s the pistol was exported to a number of countries and military contracts were signed with India, Poland, and several South American nations. Model 27 production was officially phased out in 1950 with the introduction of the 7.65mm Cz-50. In all, almost three quarter of a million Cz-27s were made over a 24-year span, making it one of the most mass produced 7.65mm designs in history.

Surplus selloffs after the war coupled with plentiful G.I. bring backs means that the Cz-27 is not hard to find today. Typically at prices that for a WWII German pistol are appealing to collectors at any level. Original marked magazines are not difficult to find and, with large numbers Cz-27s on the market, replacement parts can typically be located with a little effort.

The Model 27 markings can be broken down into three periods; pre-war (1927-1939), German WWII production (1940-1945), and post-war production (1945-1950). Pre-war examples are marked on the top of the slide “CESKA ZBROJOVKA A.S. v PRAZE” followed by the serial number and a Czech rampant lion inside an N proof mark. The year of production is marked with a small two letter code on the trigger guard. 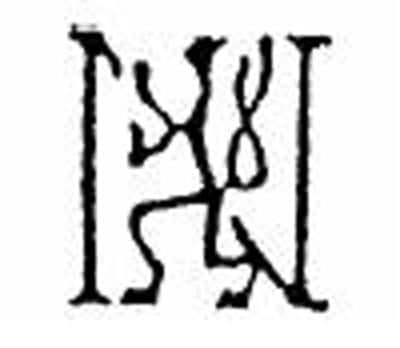 German production can be broken down into several broad categories. All will have “Pistole Modell 27 Kal. 7,65” stamped on the left hand side of the slide, and a WaA76 acceptance stamp over the right grip.  Early German production at the Strakonice plant was stamped “Bohmische WaffenfabrikAG in Prag.”, followed by an eagle proof and the serial number along the spine of the slide. Later production would use the German code “fnh” on the left hand side of the slide in front of the Pistole Modell 27 Kal. 7,65 legend. For this series of production an eagle proof followed by the serial number was stamped into the spine of the slide.

All pistols were made in traditional blue finish, and later in a phosphate finish as well. The quality of these pistols greatly diminished, particularly late in the war, as chronic shortages played havoc with production schedules. It should be noted that a large number of minor stamping variations are seen with Cz-27s made under German occupation. U-marked training models exists, as do police and military variations. Magazines for German production are typically stamped P. Mod. 27 on the base. Post war Cz-27 production was initially accomplished with remaining German production parts which can lead to several marking variations. 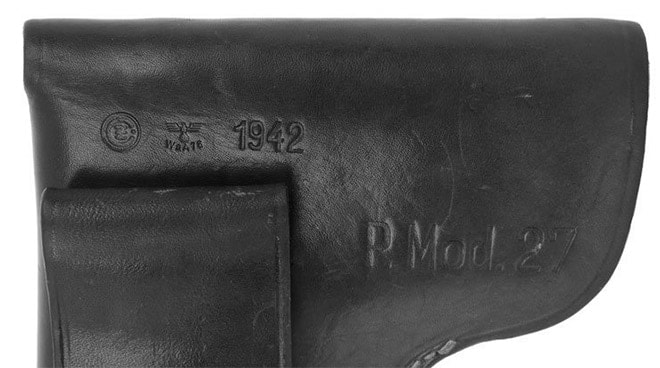 Typical markings found on the back of a German issued P. Mod. 27 holster.

The official German pattern holster for the pistol is made of brown or black leather with a spare magazine compartment sewn on the front, and a single wide belt loop. On the back it is stamped “P. Mod. 27,” along with the year of production, the Czech rampant lion inside an N proof mark, and the same German WaA76 acceptance marks found on the pistol. The holster is less frequently encountered in pebble grain, or in a canvas tropical configuration.