Historic Arms: The Swedish Mausers in 6.5x55mm — the crown jewels of Europe 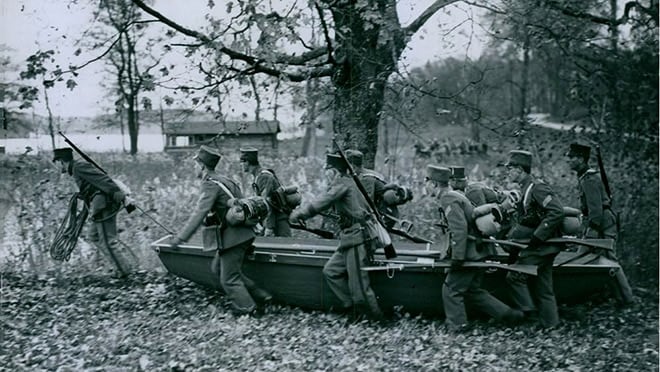 The latter part of the 19th Century was a busy time for firearms development. All of Europe was beginning to rearm and replace their outdated rifles with one nation after another playing a lethal game of keeping up with the Joneses. In less than two decades, the entire continent would be engulfed in a war unlike anyone had ever seen before and even the more remote European nations were not immune to this ramp-up

In 1891 the Swedish-Norwegian Rifle Commission started working on a replacement for their obsolete Gevar m/1867 Remington Rolling Block. This gun had already been re-chambered from its original 12.7mm blackpowder round to 8x58R Danish Krag and the commission tested out a variety of cartridges and designs before choosing a 6.5mm (.264) diameter round. This was considered somewhat unusual at the time, even among countries who were leaning towards 7mm and 8mm diameter cartridges.

The new bullet was fit in a brass case that was 55mm in length and the commission made the decision very carefully, scrutinizing every angle of the case before coming upon a final design. Where Sweden and Norway differed was on their choice of rifle. Norway went with their native son and adopted a Krag-Jorgensen rifle chambered in the new round whereas Sweden, like so many other countries, went to see Paul Mauser and his new bolt action rifle design. 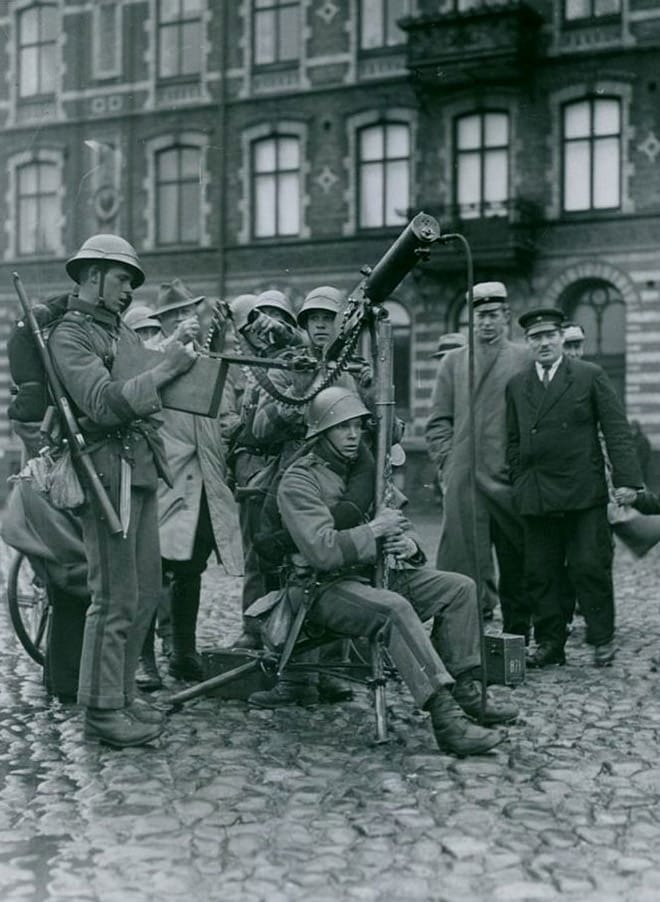 A Swedish soldier manning an anti aircraft machine gun is seen with a Karabin m/94 slung over his shoulder.

The Swedish half of the commission chose a rifle that was based on the Mauser 1895 action; it had a one piece bolt, dual locking lugs and a straight bolt handle. It could also hold five rounds in the integral magazine, definitely an improvement over the single shot Gevar m/1867.

The first gun adopted was the short m/94 carbine in 1894, known as the Karabin m/94. Shorter even for its day than most other carbines, the m/94 had a 17.5 inch barrel with a full length stock that extended to the end of the barrel. The overall length of the Karabin m/94 was only 37 inches, shorter than a Winchester 94 carbine. The first rifles were actually not produced in Sweden but in Germany at the Oberndorf factory before the Swedish started making their own. The Karabin m/94 was made up until 1933, and of the 127,000 that were made, only 12,000 were produced outside of Sweden.

Only 2 years after the Karabin was developed, the Gevar m/96 infantry rifle debuted. Much longer than the Karabin with its 29-inch barrel, it had an overall length of 50 inches. Before Swedish production took over in 1900 after some delays, there were some 45,000 rifles produced in Germany. Nearly 500,000 m/96 rifles were made overall. 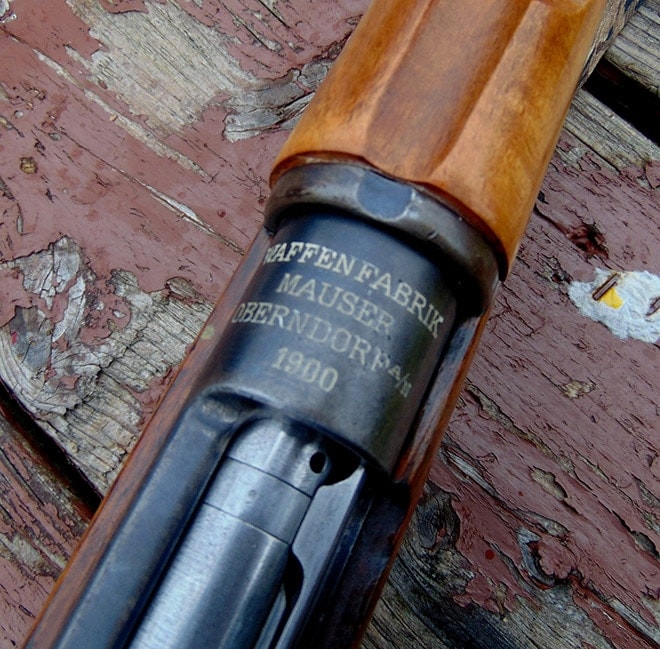 For the first four years of production, the m/96 rifles were made in Germany and after that in Sweden. (Photo: David LaPell)

By 1938 it was realized that the length of the m/96 rifles was too long and out of date for the tactics of the day, so some 55,000 of them were taken and had their barrels trimmed down to 23 inches. They are easily recognizable with their straight bolt handles and are known as Gevar 96/38 rifles. Later new m/38 rifles were produced, distinguished by turned down bolt handle.

Sweden also made a rare sniper variant from hand-selected m/96 rifles. These were fitted with Swedish made AGA 3x scopes and have a turned down bolt handle as well. Only 5,500 were ever made. Oddly enough except for ceremonial purposes, the sniper variants, known as the m/1941, were the last Swedish Mausers to be retired, having seen use by the Swedish Hemvarnet (Home Guard) until 1995.

In the beginning, the round that was fed through these rifles, known today of course as the 6.5x55mm, was loaded by both Sweden and Norway and called the skarp patron m/94 projectil m/94. It featured a 156 grain long round nose bullet that had a muzzle velocity of 2,379 fps out of the 29-inch barrel of the Gevar m/96. Sweden replaced the round in 1941 with the skarp patron prickskytte m/41 which is the round we all commonly know today. It uses a 140 grain spitzer bullet and was a vast improvement at 2,625 fps from the same 29-inch barrel.

All variants of the Swedish Mausers are probably the most well known Mausers to see the least amount of active combat — although some of them actually did from time to time. One case was in the hands of Swedish volunteers helping out the Finnish forces during the Winter War against the Soviet Army. Consequently, some 8,000 Swedish Mausers were left behind in Finland and taken up again by the Finnish forces against the Soviets during the Continuation War. It was these Finnish used Swedish guns that gave that country its first taste of the round that would become a favorite to this day for hunting reindeer and moose.

While Sweden remained neutral in both World Wars, during the German invasion of Norway, the Swedes supplied some rifles to Norwegian forces when they fled to that country, returning with these weapons after the German occupation of Norway ended. Swedish Mausers also found their way into the hands of the Danish resistance who were fighting the Germans in their home country. It was all of these leftover rifles after the war had ended that gave the Swedish Mauser and its 6.5x55mm round a second life as a hunting rifle in the far northern forests of Europe. 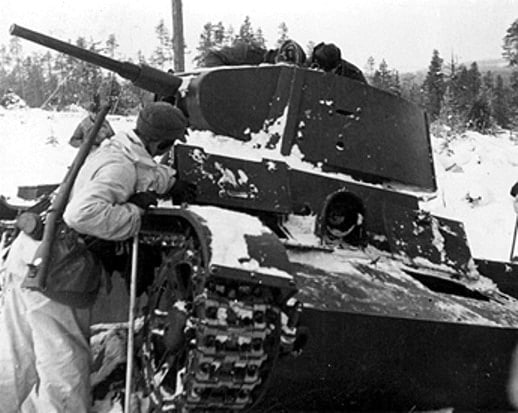 A Swedish Volunteer during the Winter War examines a knocked out Soviet tank, he is carrying a m/94 Karabin.

While big game hunters across Scandinavia were discovering that the same mild recoiling round that performed so well in combat did just as well on large game, for many years it was almost ignored here in the United States. Slowly it gained a following, even though other small caliber rounds like the .257 Roberts, .243 Winchester and the .25-06 were making serious inroads against bigger caliber rifles.

Occasionally a company would produce a commercial rifle in 6.5x55mm but it only seemed to last a short while and then it would be discontinued. Still the Swede remained popular with those who shot it, because of its ability to adapt to handloads and its long bullet which bestowed it with a fabled ballistic coefficient over ranges out to 200-300 yards. The North American hunter who gave the 6.5 Swedish Mauser a chance quickly found out that it worked very well on deer sized game and larger when kept within reason. 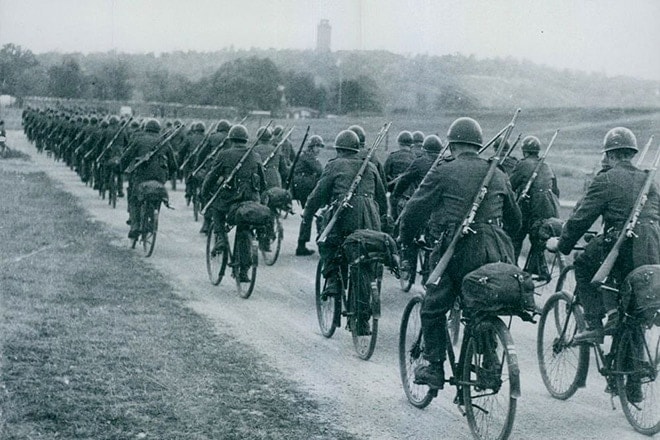 Swedish soldiers on bicycles are seen with m/96 rifles slung.

To this day sadly, American rifle makers tend to ignore the 6.5x55mm now intent on focusing on the new 6.5 Creedmoor despite the fact that they are very close when it comes to performance. Still, guns are being produced by Howa, Tikka, CZ, and Sako. Factory ammunition is also readily available from Hornady, Remington and Winchester in loads from 120 up to 160 grains and of course, handloading for the 6.5 Swede is pretty straightforward (although if you are using a surplus military rifle, take care to keep the pressures within the safe limits).

It is with one with those many surplus rifles that I found out the joy of shooting not only the Swedish Mauser but the 6.5x55mm round. My first was years ago when I found an original m/96 rifle that was well worn but shot well. I traded it off at one time because I wanted something a little more practical to shoot and hunt with, but I was always looking for another. Several months ago I got my chance when I found a German-made 1900 Swedish Mauser m/96.

All the numbers matched, though at one time the barrel had been cut back a couple of inches, supposedly because it had a bad bore. The original front sight had been replaced by something that did not fit at all with the gun, so I had the barrel cut back again (seeing as there is no collector value) to an even 20 inches. I also had the forearm cut even with the handguard so I could keep the sling swivel and it gave the rifle a cleaner look. I also put on a different front sight with a new ramp and a Skinner front sight blade which also I think gives it a clean look and works well with the original ladder rear sight. 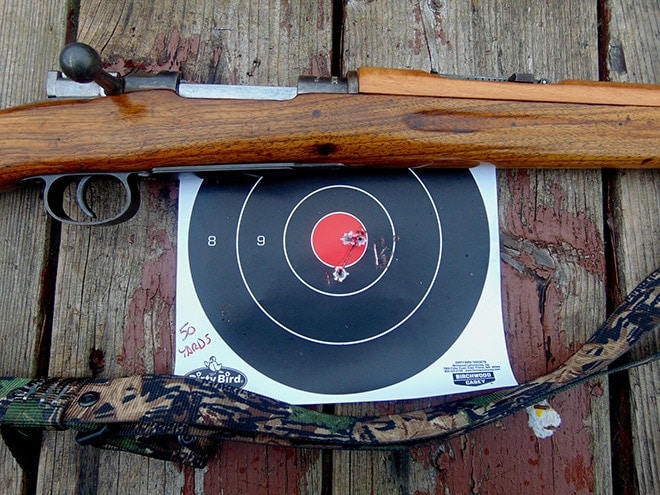 What I found with the 6.5x55mm Swede in any form is that even with the metal military style buttplate, it doesn’t punish you like if you were shooting something like an 8mm Mauser or 7.62x54mm round. This is impressive, especially since this gun is now fairly light after all that cutting and is the same overall length as a new Marlin 336 carbine.

I have experimented with handloads but I have found it shoots factory ammunition quite well. My last time to the range I got a three shot group of 1.5 inches from the 50 yard line with Remington 140 grain rounds — not bad with a gun that is 117-years old, supposedly had a bad bore at one time and using open sights. A gun like this would make a perfect Scout rifle project since, like all the military Swedish Mausers, it can be fed through a five round stripper clip which are very common and plentiful. Not to mention you can carry a fair amount of 6.5×55 ammo on hand without it getting too heavy or cumbersome. 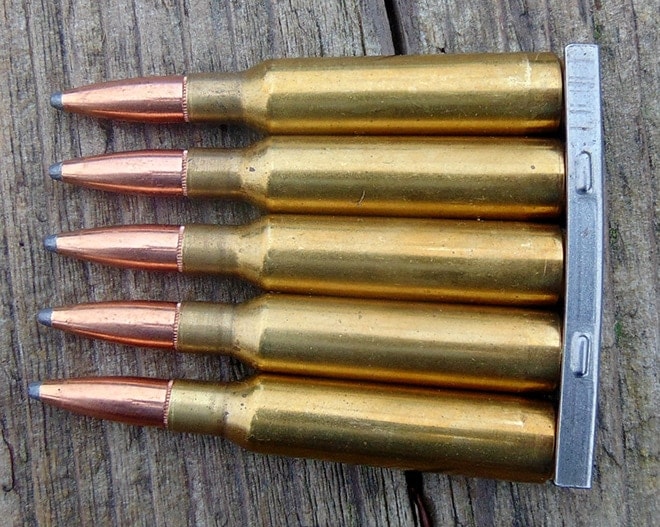 All of the Swedish Mausers were capable of using five round stripped clips. (Photo: David LaPell)

As far as cheap hunting rifle, you can find all original m/96 or m/38 Swedish mausers for $400-$500 depending on rarity and condition. An original m/94 Karabin is much more but sporterized guns often go for next to nothing, certainly less than most new bolt action rifles.

The Swedish Mauser and the 6.5×55 round have both survived for well over 100 years. They developed a following even though they never saw a great deal of military service in any wars. No, they never became war prizes brought home by American solders after either World War, yet their popularity spread by experience and word of mouth. Hunters in Europe started with them first and they started to trickle into this country.  Later that turned into a deluge. The 6.5 Swede left the confines of military surplus and is mainstream even though it might not be as highly regarded as it should be. Still, there is no denying that it is the best of all the Mauser rounds to come out of Europe.