Some items are so pricey that most people won’t give them a second glance, like high-end kitchen knives, for example. But people who already own high-end knives can’t imagine going back to sawing through food, but to the uninformed the price difference seems unwarranted. I felt exactly the same way about the SIG Sauer 516 Carbon series of rifles. I really enjoy the standard 516, but is the 516 Carbon TS worth the extra $500?

Absolutely. The SIG 516 Carbon ships with more features than a loaded Cadillac. Everything you could ever want from AR15 is possible with this weapon. I’ll admit that my first draft of this review wasn’t nearly as glowing. I believed the 516 Carbon to be in the same realm as the ACR, a very expensive, reliable weapon that doesn’t do enough to warrant its premium price. I had already penned half of this piece before I went to a recent designated marksman rifle match. 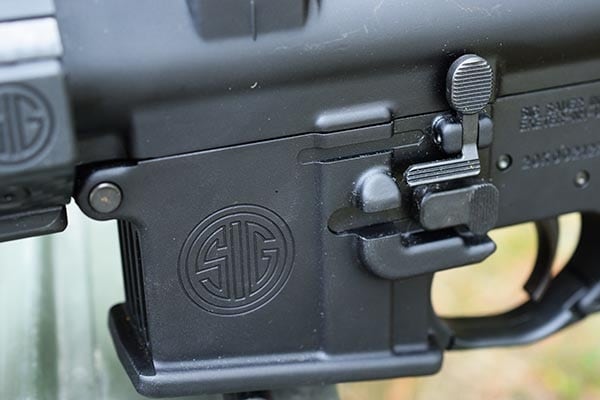 The SIG 516 features a forged lower receiver for a tighter fit between upper and lower. (Photo: Jim Grant)

I brought out the custom target rifle I built for the DMR article, and was shooting decently with it, but encountered a malfunction that I lacked the tools to fix on site. So I began packing my stuff to head home when my mind drifted to the SIG 516 Carbon in my trunk. A piston rifle zeroed for 55-grain ammo and wearing a four-times magnification scope, is probably the worst setup imaginable for distance shooting, outside of an iron-sighted 7.62x39mm AK.

I tried to look calm after seeing the next stage, facing 12 half-foot steel plates at 350 yards with a crosswind. I stepped up to the firing line, the shot timer screeched and I began throwing away ammo. Except, that’s not what happened.

The fourth round I put down range slammed into the bright orange face of the first plate. I think I flinched when that first round hit, so I was surprised. Now I had bead on those blaze orange bastards and I wasn’t going to leave any standing. Thirty seconds later, I cleared my rack and moved on to my partner’s. He was struggling to make hits with a poorly zeroed rifle. A few moments later, I had dialed in his targets and dropped them all as well.

So how the hell does a piston-driven AR clear a plate rack at 350 yards with a measly four power scope? Quality engineering.

The SIG 516 Carbon includes a myriad of features that allow shooters to squeeze every last drop of accuracy from the platform. Like its Giessele two-stage match trigger. This trigger breaks like a thin glass rod. If a shooter pulls shots off target with a trigger this nice, they should get better ear protection because gun shy flinching is the only way to pull this trigger off target. 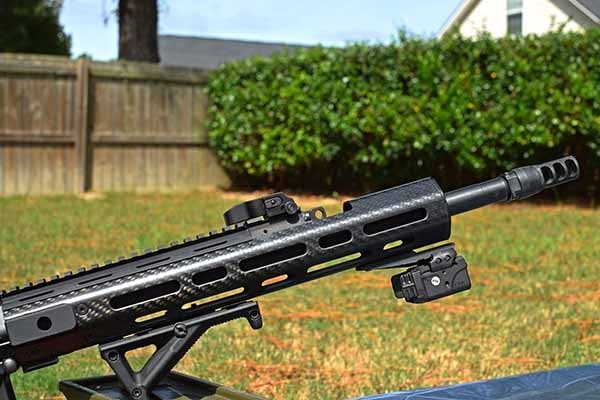 Another portion of the SIG’s construction that lends itself to superior accuracy is its nitrided, cold-hammer forged 16-inch barrel.

Chambered in 5.56mm, the heavy contour barrel weight negates the ultra light carbon-fiber handguards. These handguards aren’t just attractive, they’re also extremely durable and functional. For 3-gun, competitors can mount angled fore-grips or hand-stops. Though the SIG 516 Carbon is built to be a race gun, it’s much more than that.

The four-position gas piston system allows shooters to tailor the gun to their ammunition. Crank it wide open when shooting in bad conditions or dial it down to flawlessly cycle ammo with a sound suppressor attached. Which is easy to install, since the SIG 516’s barrel has standard threads topped  with an A2-style flash hider. I replaced mine with a SilencerCo MAAD muzzle brake, which quells the already mild recoil of the SIG 516.

Since the 516 is a piston rifle, I decided to run it for a few hundred rounds in the pouring rain and it ran flawlessly. In fact, the rifle ran without issue regardless of ammo type, weather conditions or internal cleanliness. After running 1,500 rounds of various types of ammo ranging from ultra light grain varmint loads and military M193, to Hornady match grade 75 grain, I am very impressed, having never experienced a jam of any sort, despite never cleaning the rifle. 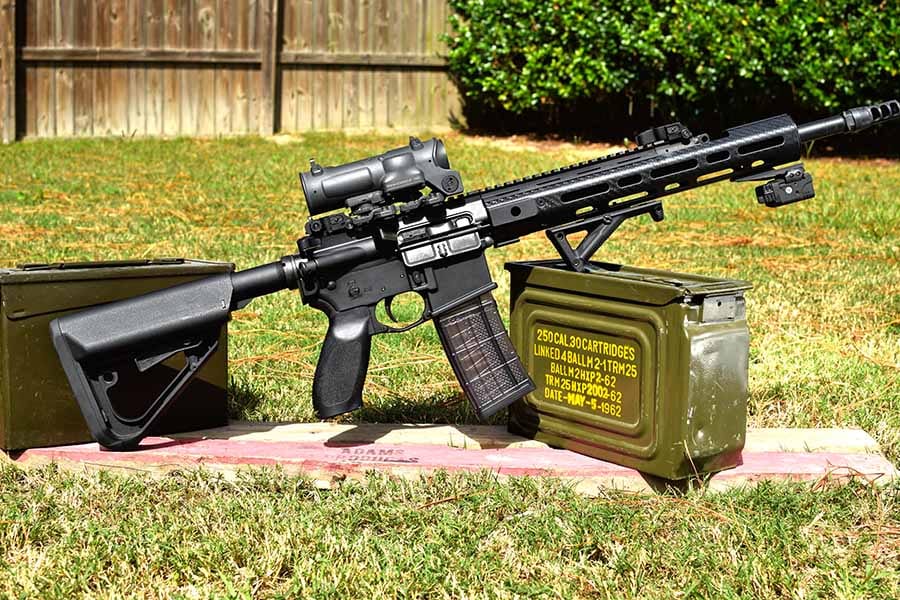 The SIG 516 Carbon not only looks awesome, but it runs like a scalded dog with any SAAMI spec 5.56mm or .223 ammunition (Photo: Jim Grant)

Aiding this reliability even further is the included 30-round Lancer L5 AWM magazine. These translucent polymer magazines are of similar quality to Magpul PMAGs with the addition of metallic feed lips which increase the magazine’s durability. 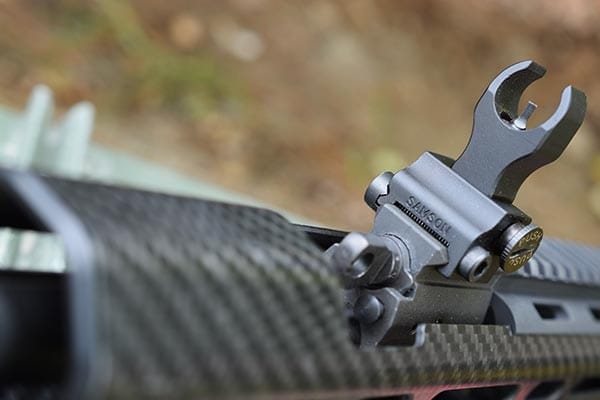 The 516 feeds with the same reliability of an AK rifle, but thankfully that doesn’t mean it has to shoot like one. Accuracy surpassed my most optimistic expectations of a piston rifle, achieving hits on 6-inch targets out to 450 yards utilizing standard Federal XM193, 55 grain FMJ ammunition. For shooters without an optic, the SIG 516 Carbon ships with a set of Samson folding back-up iron sights including an Heckler & Koch-style front sight.

Controls on the SIG 516 are your standard affair AR15 setup, with its superb ergonomics to boot. The only difference is the ambidextrous magazine release and the extended bolt catch lever. Additionally, the SIG 516 Carbon includes five quick detach sling mounting points and a QD sling as well. The adjustable stock is a custom part made by Ark Defense, and resembles a standard M4 style stock with a wider cheek rest and rubberized buttplate. The stock is easy to adjust and locks up tighter than bank vault. 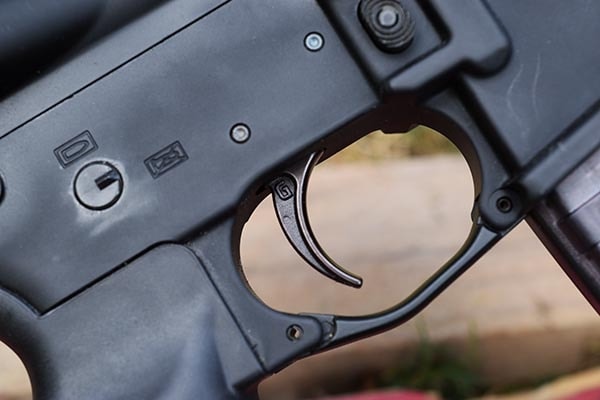 The SIG 516 Carbon TS retails for $2,371, which by comparison to standard AR15 rifles is quite expensive. However, as a race gun with a piston system, match trigger quality barrel durable iron sights and a carbon fiber handguard, the price is in line with a custom-built race gun. Before you dismiss this as astronomical, keep in mind that street prices are around $400 less than MSRP.

Overall the SIG 516 is an incredibly high-quality weapon with an equally high price. Many people will dismiss it purely for that price, but no one who shoots the rifle can argue that it isn’t one of the finest weapons they’ve ever fired.