How do you create a darn fine-looking, long-range rifle? Pair a legendary name like Colt with the high-end custom brand of Cooper Firearms of Montana. It’s my pleasure to introduce you to the Colt M2012 line of civilian long-range rifles. 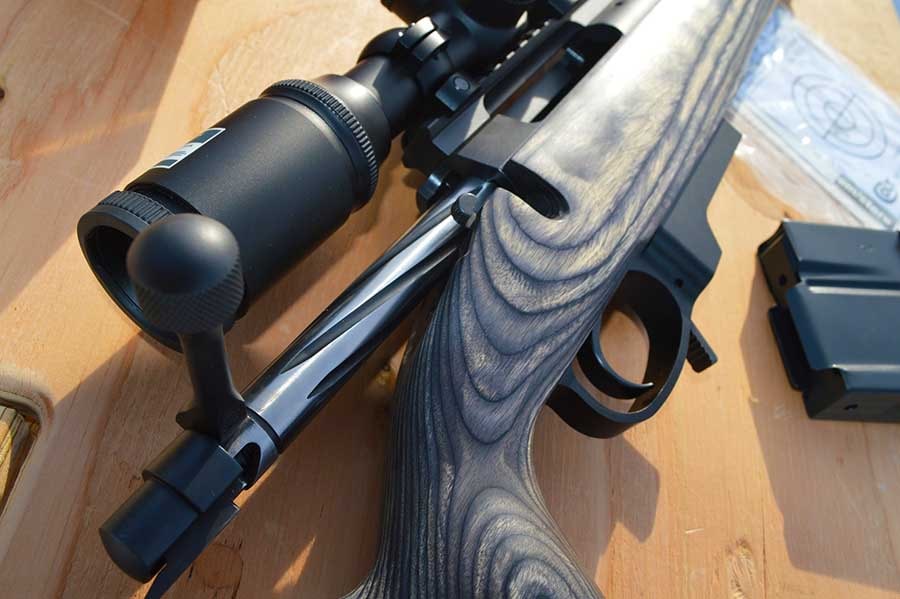 The Colt’s spiral-fluted bolt is gorgeous. (Photo by: Kristen Alberts)

Colt’s bolt gun entry into the civilian market sprung largely from their earlier line of tactical long-range weapons (M2012SA308) chambered solely in .308. Those rifles are super-specialized, heavy and fully adjustable. This new duo of Colt bolt guns are marketed to the everyday hunter, target shooter and aficionado of fine rifles. The two latest Colts are available in a pair of accurate chamberings, the most popular naturally being the .308. Our test gun, however, came in the less common (though no less sweet and accurate) .260 Remington.

Bench shooters may be more familiar with the .260 under its alias: 6.5-08 A-Square. For what it’s worth, this round is not entirely unrelated to the .308. To oversimplify, it’s basically a .308 round, necked down to a 6.5 bullet that is traveling with blazing speed. Savvy reloaders will know that the .243 can also be necked up with similar results. Nosler’s latest loading guide lists the .260 ballistics of a 120 grain spitzer at a muzzle velocity between 2870-3049 fps depending upon the chosen load. With 100 grain ballistic tips, the .260 is ideal for varmints while the 140 grain bullets are suitable for much larger game, making Colt’s .260 a very versatile rifle.

Our test gun, the M2012LT260G or Cooper Colt as we like to call it, is touted as the “precision rifleman’s rifle.” Built with a Timney single stage adjustable trigger and 22 inch medium heavy match grade chrome-moly fluted barrel with 6-groove button rifling for punching out both “X”s and vitals. The .308 barrel comes with 1-10 inch twist, but our .260 had 1-8 inch twist. Weighing in at 8.5 pounds without the magazine, this rifle is heavy enough to absorb any recoil and aid in accuracy, yet light enough to carry afield, unlike its aforementioned tactical granddaddy that weighs over 13 pounds.

Our Colt came packaged in a rather plain Colt branded cardboard box with one 5-round mag; 10-rounders are also available. Included in with each rifle is a signed, serial numbered and dated test target with three shots in a neat little cloverleaf. The box may be plain, the rifle is anything but. The fluted barrel is dressy and the spiral-twist bolt is pure class. The rifle wears a grey laminate stock with a Decelerator butt pad. The barrel is finished with a Custom Cooper Firearms muzzle brake on 5/8 inch diameter 24 TPI muzzle threads. It also comes with multiple sling studs, making for simple mounting of a bipod.

With an MSRP of $2795 the market is, naturally, a limited one. An MSRP is merely a starting point, but that’s a steep price for a rifle touted for the civilian market. On the other hand, where can you get a custom rifle built for a lifetime of long-range accuracy that carries two of the strongest names in the business?

When you buy an M2012, you rightly expect much more than another mass-produced rifle from a big-box store. The M2012 is as much a conversation piece as a shooter. We had every eyeball on the range on this gun. Not to mention, when you feel its solid weight, you also feel its quality and can’t help but want to send some rounds down range. 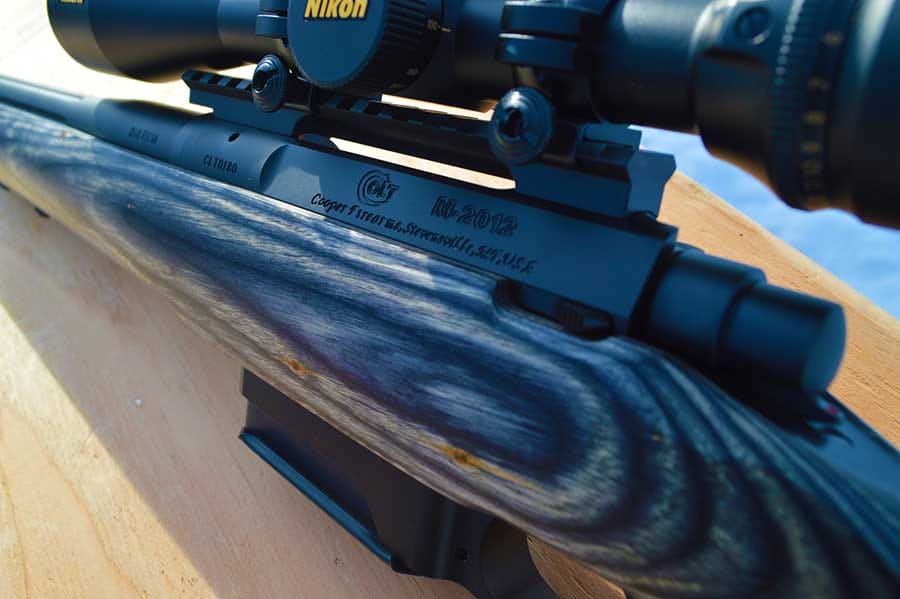 Even under less than ideal conditions (12-20 degrees with wind chills at well below zero) this gun can perform. It’s interesting to note that Colt lists their barrel specs as being a “medium heavy” barrel. We have handled our fair share of rifles and the vast majority of manufacturers would certainly refer to these as heavy barrels. That’s a testament to how far Colt and Cooper are willing to reach for accuracy.

While it’s unclear whether Colt or Cooper had more to do with the actual production of this rifle, we do know it is well made. The bolt action on the M2012 gives new meaning to the word smooth and the adjustable trigger breaks crisp, without a hint of creep. Though the empty magazine was not as snug a fit as we would like, loading it quelled the rattle. We dressed our test gun with a Nikon Monarch 3-12×42 and with a loaded magazine, the gun was noticeably heavier, yet still remarkably well balanced. An integral picatinny rail at 0 M.O.A. was fine for our needs out to 400 yards with no scope adjustment issues.

We spent several range sessions and roughly 120-150 rounds between three trigger fingers with this rifle. To be fair, that’s not nearly enough shooting to properly break-in a rifle, but keep in mind the shooting conditions: Midwest cold, windy and snow-covered.

What we found were easily repeatable single-hole 3-shot groups at 25-50 yards when sighting in and getting warmed up. The rifle simply laughs at that range and practically shoots itself. We used four brands of ammunition with bullet weights from 120-140 grains.

Initial 100 and 200 yard 3-shot groups averaged 0.77 inches and 1.24 inches respectively. However, we noticed with consistency that after the barrel both heated up and was fouled — say 10-12 shots — accuracy took a nose dive, literally. 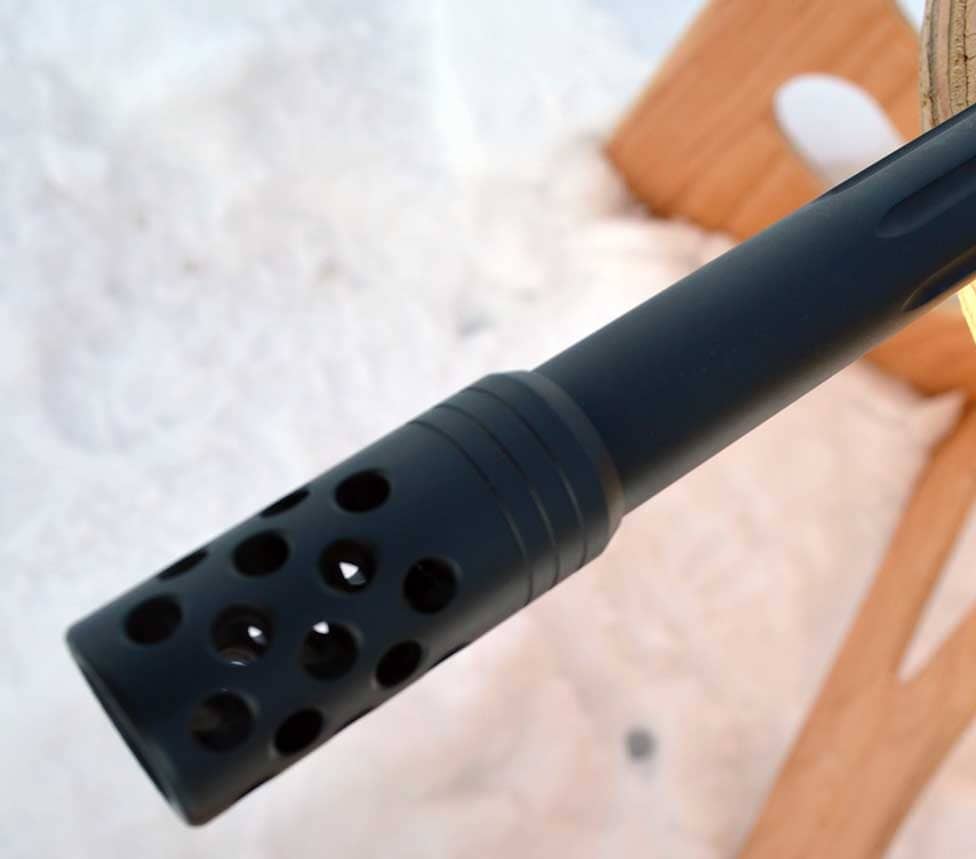 The previously tight 3-shot groups became descending, diagonal 3-shot strings. We were able to replicate these strings with regularity by all three shooters. Given a cool-down period, during which we also performed a quick field-cleaning, the rifle came right back with accuracy that brings big, toothy smiles to the range. We reached out as far as 300 and 400 yard marks with the performance you’d expect only from a custom gun. Our most experienced triggerman is a proven, dedicated and decorated competition rifle shooter, so there is no doubt that the shot stringing is not shooter related.

After much deliberation, all we can figure is that the stock must bind somewhere on a heated barrel, as we did not always clean the gun during these siestas, thus eliminating that issue from the equation. Both temporary and permanent solutions would be simple enough and this was quite possibly a flaw on our single test gun. Regardless, at the price point, that’s a tough pill to swallow. Luckily, Colt’s customer service is extraordinary and eager to make this right. Stay tuned for a future updates on this review.

Back to the good news. A rifle chambered for .260 has negligible recoil to begin with.  Factor in both the weight of this rifle as well as the muzzle break and you can erase the word “recoil” from your vocabulary. We shot the rifle from a lead sled, a polymer rest and sandbags with the same results: the gun doesn’t jump. In fact, it barely moves off the 10-ring, making follow-up shots a snap. The Colt M2012 in .260 is a true pleasure to shoot and would make an ideal rifle for first time shooters, the recoil sensitive, the choosy bench-rester or the civilian sniper/hunter. 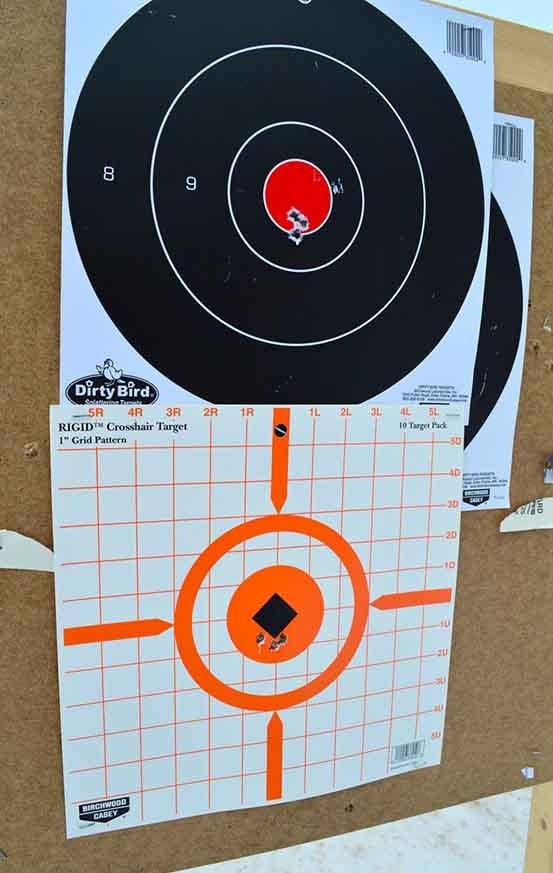 With accuracy like this, all misses are definitely user-error (Photo by: Kristin Alberts)

I admit skepticism entering into range time with this rifle, based purely on the price tag. However, the glimpses of its capabilities have me more than intrigued. As a matter of fact, I’ve never even considered purchasing a custom rifle, because I did not think performance could rival dollars spent. The combination of Colt and Cooper could, potentially, prove me wrong.

I know I’ll be keeping a finger on the pulse of other major manufacturers forays into the custom market.  After all, where else can you buy those two classic names in one high-end gun with a price that comes with only average custom guns?