In the field with a Ruger Standard .22 semi-automatic pistol. (Photo: Nicholas Oetken)

While we have our Mark III’s and 22/45’s to enjoy today, it was the original Ruger Standard model (first produced in 1949) that was not only the founding father for these guns but for the era of .22 semi-automatic pistols in general.  Recently, I was given the opportunity to review an old Ruger Standard… but not just any Ruger Standard.  This particular Ruger Standard rolled off the assembly lines in one of the very first years of production and would today be regarded as a collector’s item. 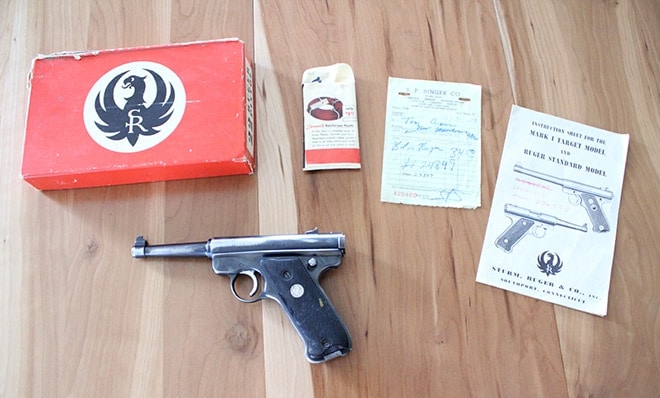 The original box, paperwork, and faded red coloring on the grip’s logo indicates that this pistol is from the first production run. (Photo: Nicholas Oetken)

The original box, paperwork, and what’s left of the original red coloring on the grip’s eagle logo are here to prove it.  We’ll get into the importance of the logo in a moment.  The carbon blued steel finish is wearing off in some areas, and the well worn rubber grip has certainly seen better days, but all in all this gun has been extremely well taken care of through the decades of heavy use that it has seen.

The Standard holds a very unique place in firearms history and to me is just as much a classic handgun as the 1911, PPK, or the Colt Python.  Firearms designer Bill Ruger and backer Alex Sturm likely had no idea that the Standard would go on to become the best-selling .22 pistol of all time and initiate the marketplace for rimfire pistols in general when they first started making them. 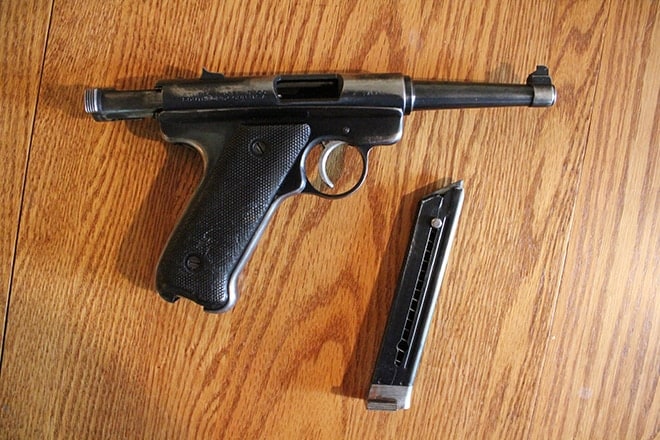 Original Ruger Standard .22 pistol with 9 round magazine. Mag release is located on the butt of the grip. (Photo: Nicholas Oetken)

At first glance, the Ruger Standard looks like a German Luger pistol, but how the action works is actually more similar to the Japanese Nambu that was issued in World War II.  This is by design—Bill Ruger’s initial idea for his .22 semi-automatic pistol was conceptually just a re-chambering of a Nambu pistol to .22 caliber for use as a sporting and plinking gun.

As a result, the traditional slide that features on most semi-automatic pistols is missing from the Standard.  In its stead is a tubular shaped bolt that operates using a basic blowback action.  The bolt can be pulled back into the rear position in order to feed a round or to clear a jam, and can be manually locked open when the safety on the side is engaged. 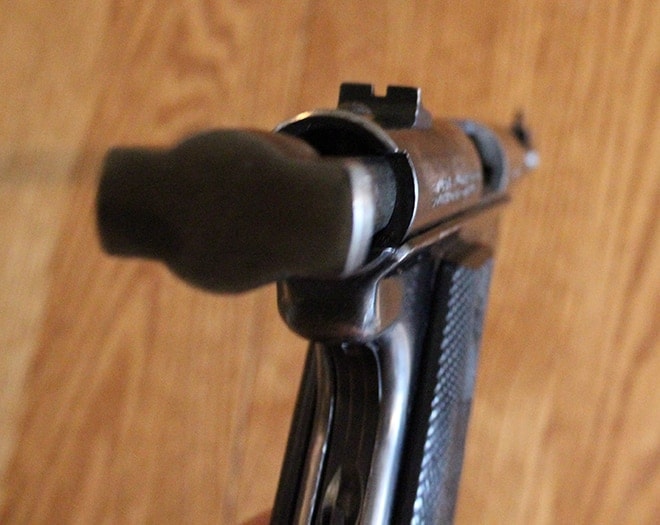 Ruger Standard uses a tubular bolt rather than a slide. (Photo: Nicholas Oetken)

The magazine holds 9 rounds, which was updated to 10 for the Mark II and Mark III, and is held by a catch at the butt of the gun that I am not a fan of.  On the Mark III, this was updated to the traditional magazine release button, which allows the magazine to be removed from the gun with only one hand instead of two.

The Ruger Standard was an immediate success when introduced in late 1949, and the updated Mark III and 22/45 (a Mark III with the grip angle of a 1911) continue to sell very well to this day.  All early (and by early, I mean early) Ruger Standards featured the red logo that Alex Sturm designed, but when he passed away at a young age in late 1951, Bill Ruger ordered all future logos to be changed to black. 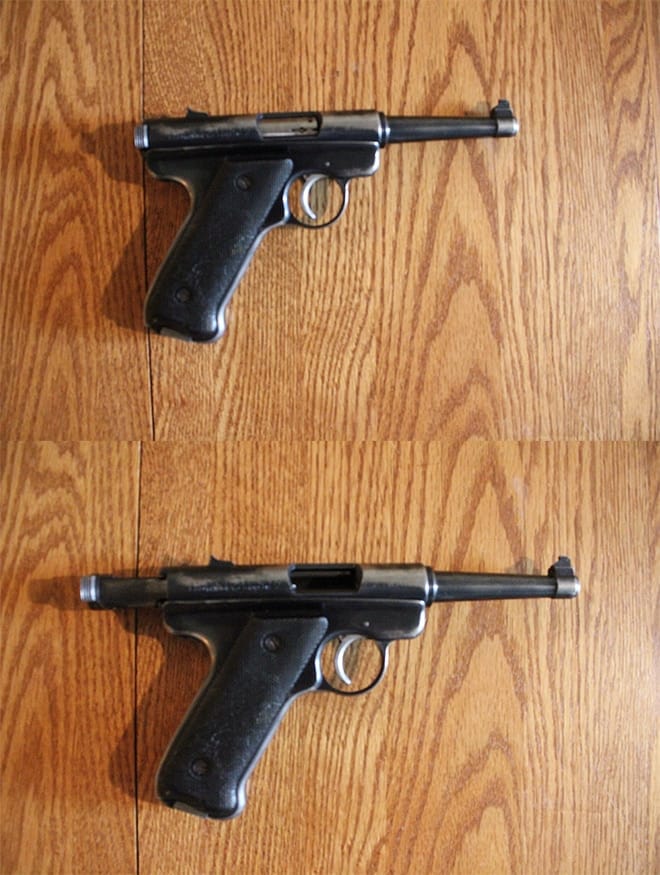 Some of the new Ruger Mark III’s have returned to the red logo, but the only Standards that featured it were the really early ones.  Case in point: if your Standard has the red logo on it, or even just what’s left of it like this one, it’s worth some money.

The Standard is extraordinarily heavy for a .22 pistol, but that’s actually one of the things that I love about it.  Ruger guns are well known for a tradition of advanced durability, and the Standard was without a doubt the genesis of that tradition.  There are few, if any, .22 pistols that give you the same feeling of power when you pick them up as the Ruger.  Thanks to the weight, when shooting the Ruger I entirely forgot about the word ‘recoil’…namely, because there was hardly any. 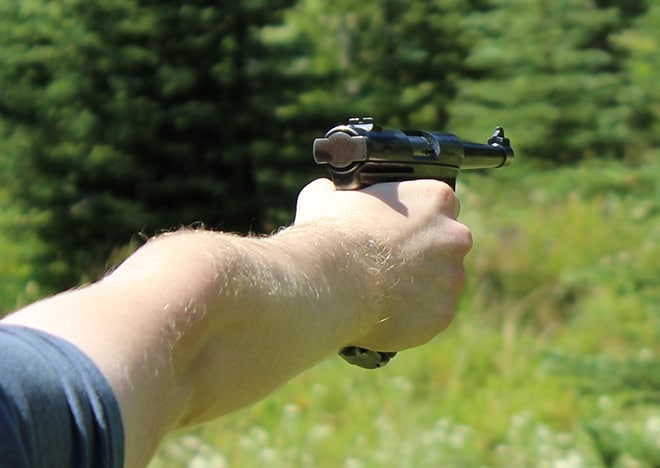 The Ruger Standard has a superb grip with excellent balance for pointing. (Photo: Nicholas Oetken)

The grip is extremely ergonomic and balances very well with the 4.2-inch barrel.  The only other gun I’ve held that points more naturally in my hand is a 1911.  However, you can never truly realize why the Standard and its successors became as popular as they have until you actually shoot it.  Not only are these guns tremendously fun to shoot because they balance and point so well, but they are deadly accurate.  In a day where I was also shooting .45s, S&W M&Ps, and .357 revolvers, my tightest groups were with the Standard.  Ruger intended for this to be a gun that you could plink with all day both effectively and never get tired of, and by all means they have succeeded. 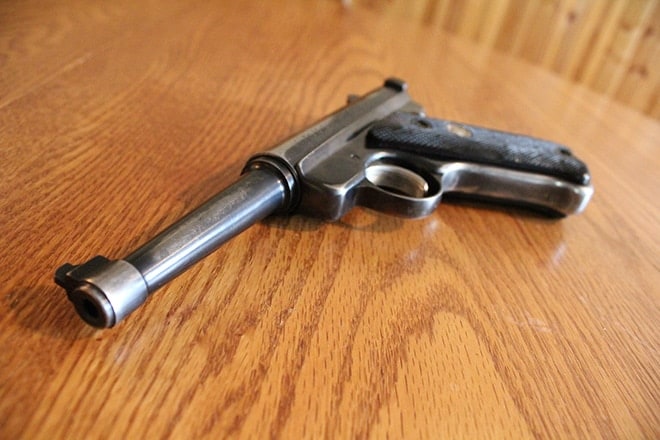 Every gun has its Achilles’ heel, and for the Standard (and all other Ruger guns in the series), it’s the monstrous field stripping process.  Taking down this gun is a nightmare that you dread knowing you have to do, plain and simple.

It requires using a tool to open a latch in the back of the grip and pressing a button in the top of the frame to remove the mainspring housing and bolt retainer (easier said than done, as the gun is put together TIGHTLY), followed by removing the bolt and the barrel (which may require the aid of a hammer), removing a few more pieces, and then having to align everything up perfectly again when you put it back together.

My only request for a potential future Ruger Mark IV would be to make the field stripping a little more straightforward and a lot less tight (without diminishing the quality of the gun of course). 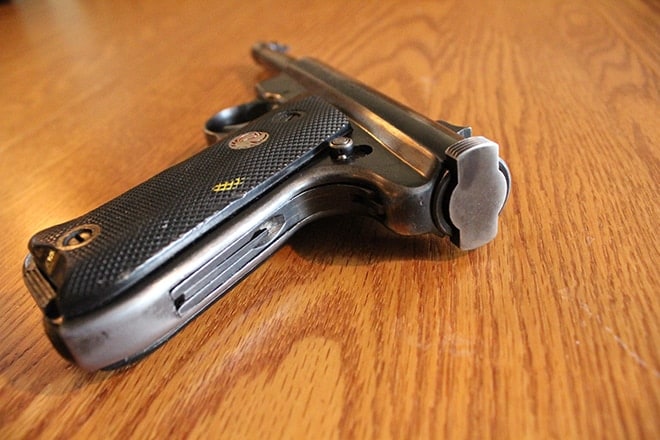 Ruger Standard’s only Achilles’ heel (for Americans at least) is the mag release in the butt of the grip. (Photo: Nicholas Oetken)

The Ruger Standard was the .22 pistol that started it all, and it shoots just as well today as it would have back in 1949.  The only real thing I don’t like about it is the ridiculous field stripping process, but the surreal way the Standard feels and shoots makes this flaw seem so minuscule.

I know for a fact that the particular gun I have here has been packed and used for decades, and to me the resulting worn bluing and grips only add value to the pistol.  It’s been a real pleasure to make the Standard’s acquaintance, and it’s convinced me that adding a new Mark III or 22/45 to my gun collection may not be too far off.