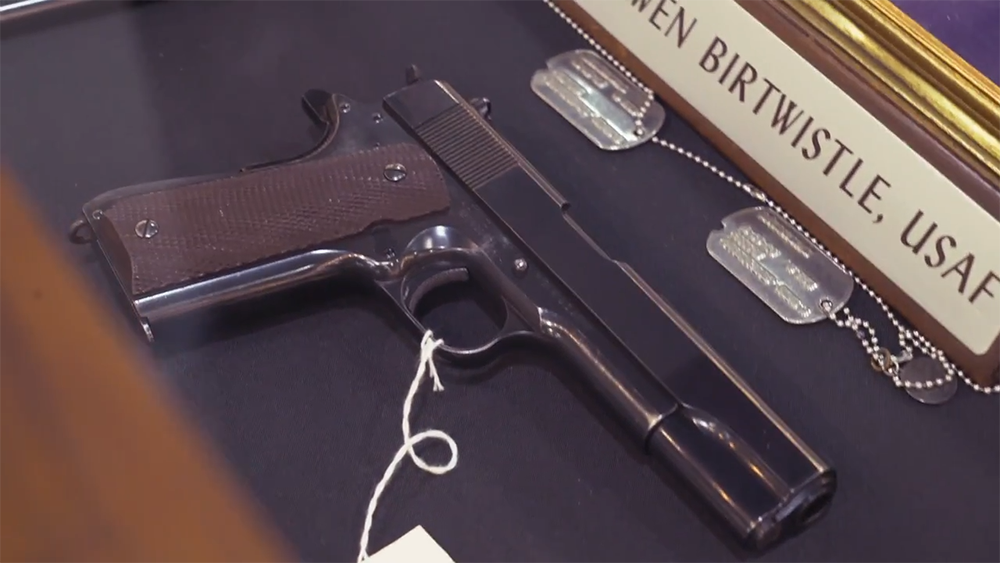 Considered one of the rarer vintage firearms still in circulation, the Singer 1911A1 is often synonymous with “Holy Grail.” When on the auction block, these guns sale for hundreds of thousands of dollars, a truly unique antique. What makes these firearms so special, especially in a sea of 1911s.

The Singer 1911A’s story begins in 1925 when Singer – best known for producing sewing machines – dabbled in firearm production. Approached by the U.S. Army, Singer was asked to conduct a study on the feasibility of mass producing 1911s for the military. Singer’s study concluded that it could support as many as 25,000 handguns in a single month. Based on the findings, the Ordnance Department awarded Singer a production study in 1939, allowing them to research and tweak production methods in order to jump into firearms production.

The following year, Educational Order W-ORD-396 was granted to Singer Manufacturing sending the company into full production of the 1911A1. The overarching goal was to reach a production speed of 100 guns per hour. The initial contract was to test the ability of Singer to churn out the pistols. The initial contract called for 500 in total. While Singer was never able to reach the lofty goal of 100 guns per hour, the company did meet its contract goal of 500 pistols. These1911A1 handguns were distributed to squadrons of the U.S. Army Air Corps.

Singer eventually divested itself of firearms production, moving their tools and documentation to Remington Rand in 1941. As a result, only the initial batch of Singer 1911A1 pistols are the only ones in existence, making these 1911s some of the rarest.

The Singer pistols represent some of the highest quality firearm production of the World War II era. The manufacturing company tooled these 1911s to not only function well but also look the part. Chambered in .45 ACP, the Singer 1911A1 features a 5-inch round barrel. The pistols also utilize a high gloss Dulite blue finish paired with brown, plastic checkered grips for a truly unique look.

Each pistol is stamped with a serial number ranging from S800001 to S800500, though an unspecified amount of non-serialized pistols were given to Singer employees. 1911A1 models in better conditions also tend to come equipped with three magazines also featuring the high polish blue finish as well as oversize floorplate pins.

The Singer 1911A1 pistols are some of the most sought-after WWII guns as there are few in existence and even within those ranks, only a handful in pristine condition. As such, the Singer handguns tend to make quite the splash on the auction block pulling in large crowds and even larger numbers.

One of the most significant Singer 1911A1 up for was originally owned by Army Air Corps pilot First Lt. Charles H. Clark. The pistol, in excellent condition netted a whopping $414,000 during Rock Island Auction Company’s September 2018 auction event.

On average, Singer 1911A1 models retail for thousands of dollars at auction and in the private marketplace serving as highly coveted pieces of history.