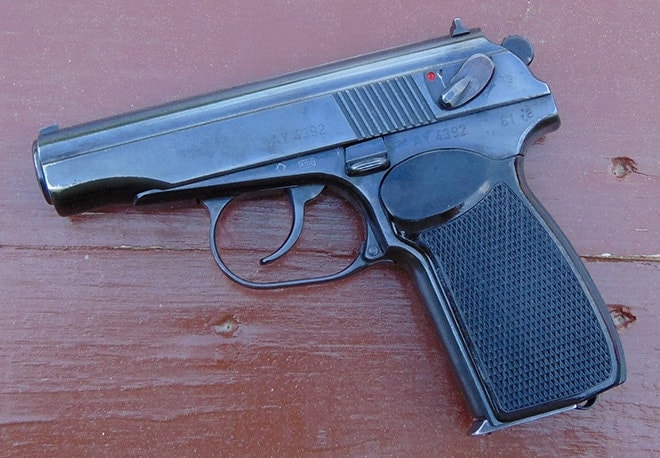 East German Makarov PM chambered in 9x18mm. This pistol was the service pistol for many Soviet Bloc countries, including Russia, during the Cold War. (Photo: David LaPell)

These days there seems to be an endless number of small concealable handguns and this trend shows no sign of letting up. The Smith & Wesson Shield, the Ruger LCP, and LC9, Beretta’s Nano and Pico, offerings from Glock and so many others the choices — it’s mind numbing. Regardless, I know of one often overlooked pocket pistol that has been around for almost seventy years and has a proven track record worldwide: the Makarov PM pistol.

The Makarov PM (the correct pronunciation is Mah-KAR-ov) was introduced in 1951 in the Soviet Union as a successor to the Tokarev TT-33 pistol. Essentially the Makarov was a copy of the venerable Walther PP pistol, but the Russians simplified the design and came up with a handgun with only 28 parts.

The Makarov was chambered in 9x18mm, a very capable round, falling somewhere between the .380 ACP and the 9mm Parabellum in terms of power. However, the 9x18mm has a slightly larger bullet diameter, .365 inch compared to the .355 inch of the other two. The standard 9x18mm has a 95 grain FMJ and an average muzzle velocity of about 1,000 fps. While it is no screamer, it is also no slouch. The magazine holds eight rounds and has the European style heel release on the butt of the pistol. 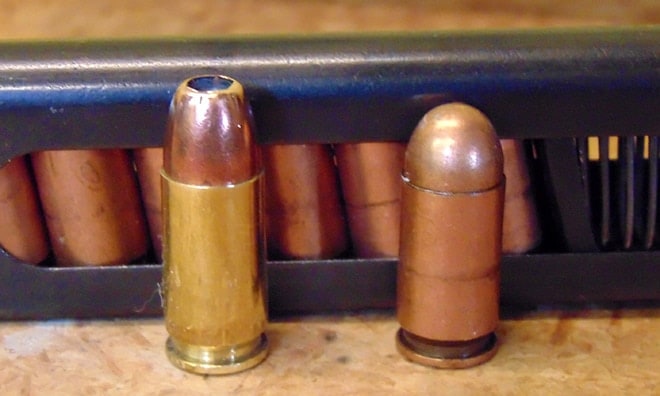 The Makarov PM quickly became the Cold War era issue handgun for several Soviet Bloc countries, remaining so for many years. While the AK-47 rifle became the symbol of Soviet military might, the Makarov was the handgun in every holster behind the iron curtain.

It wasn’t just the Russian military and police that were supplied with the Makarov — it was produced in East Germany, Bulgaria and China as the Type 59. There have even been rumors over the years of Makarovs that were manufactured in Cuba. While the Cuban armed forces and police carried Makarov PMs, no one can say if they were made in Russia or under license. Maybe now that Fidel Castro is in the middle of a really long blink we may get that answer someday. Some say there were also Romanian Makarov PM’s but like their Cuban cousins so far the rumors have never panned out.

There of course have been other handguns produced in 9x18mm, mostly made by Soviet nations who chose not to adopt the Makarov PM. Poland had the small but reliable P-64 and later the P-83 Wanad. Czechoslovakia made the CZ-82 and Hungary made the PA-63. Although this too was a Walther PP copy, the PA-63 used an aluminum frame that is not as durable as the all steel frame of the Makarov PM. 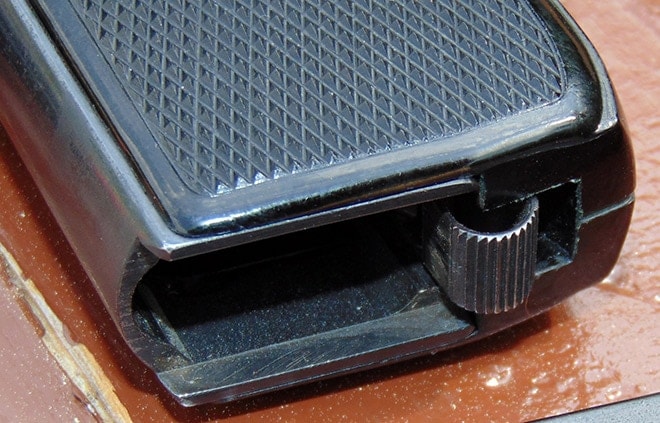 On a more curious side note, the Makarov PM is to date the only gun that has ever (officially) been to space — the pistol was part of the survival kits stowed aboard Soyuz spacecraft.

My own Makarov PM happens to be an East German version that I found in my local gun shop about a year ago. It came with two magazines, a black East German police holster and a box of fifty rounds of ammo for $350. It was made in 1961 and is in excellent condition. East German Makarovs are said to be the finest of all the variants but they all work equally well.  It is not uncommon to see the more common Bulgarian Makarovs for the price of a new Ruger LCP or occasionally less.

I was impressed with the Makarov from the first time I shot it, especially crispness of the trigger. There never seems to be a set trigger pull for them, but the double action pull on most averages about 13 pounds and the single action at around five pounds. The Makarov is of course like most DA/SA pistols: the first shot is double action and all that follow are single action with the safety acting as the decocker. 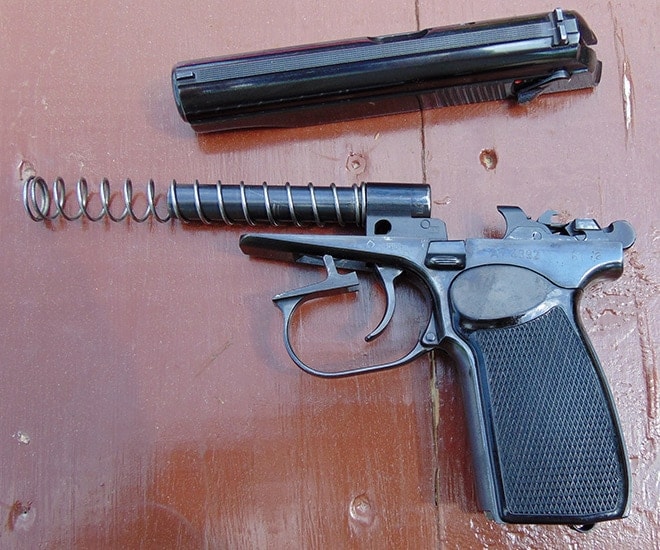 For a military surplus handgun, I find the double action pull to be very smooth even though it is on the strong side. The single action pull is downright pleasant, something you would not expect on a gun handed out to troops and police in a communist country. All of the Makarov PMs were sighted in at 25 yards and often you will see a faint line on the top of the slide matching up with a faint line on the rear sight which is adjustable for windage. That’s where the gun was sighted in from the factory. The all steel frame, blowback action and mild caliber all make for a handgun that shoots better than you would expect for a service pistol.

Field stripping the Makarov is a breeze. Once you are sure the gun is unloaded, the trigger guard drops down similar to Walther designs, and then the slide lifts off from the rear. The PM also has a free floating firing pin, which on the off chance it breaks, can be swapped out of the slide in seconds by turning the safety up and lifting it out of the slide. Once it’s off the frame, the firing pin comes out and can be swapped for a new one. 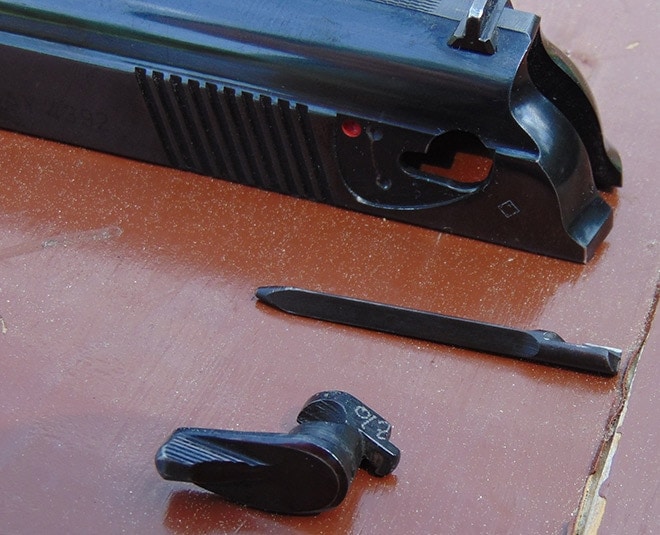 For those who wonder if that free floating firing pin is a hazard, the state of California allows Bulgarian Makarovs to be sold within its borders after tests were performed where the gun was dropped upwards of 200 times on a live round with the safety on without a single problem. With the Makarov PM the thing to remember is to keep the safety on if you intend to carry it.

For those out there who think that because 9x18mm ammunition is not on the shelves of every big box store it’s not readily available, think again. Winchester, PPU, and others make FMJ rounds that work great in all the Makarov PMs. While there is not a huge selection of personal defense ammunition, Hornady makes Critical Defense rounds for the 9mm Makarov with a 95 grain FTX bullet and an advertised muzzle velocity of 1,000 fps. Silver Bear puts out a 94 grain hollow point that also is rated at 1,000 fps.

If you want a round with some real punch, Buffalo Bore puts out a pair of 9×18 +P rounds, a 115 grain hard cast flat nose listed at 1,000 fps and a 95 grain JHP listed at 1,125 fps. For those who want to reload their own ammo, brass and dies are out there and Hornady even makes a XTP bullet that is the correct .365 inch.

One point of note on the Makarov pistols is that even though .380 ACP is close to the 9x18mm round, it is not interchangeable and cannot be shot out of these guns. However there are .380 aftermarket barrels that can be put in the Makarov PM with a barrel press. Shooters can even use the same magazines. 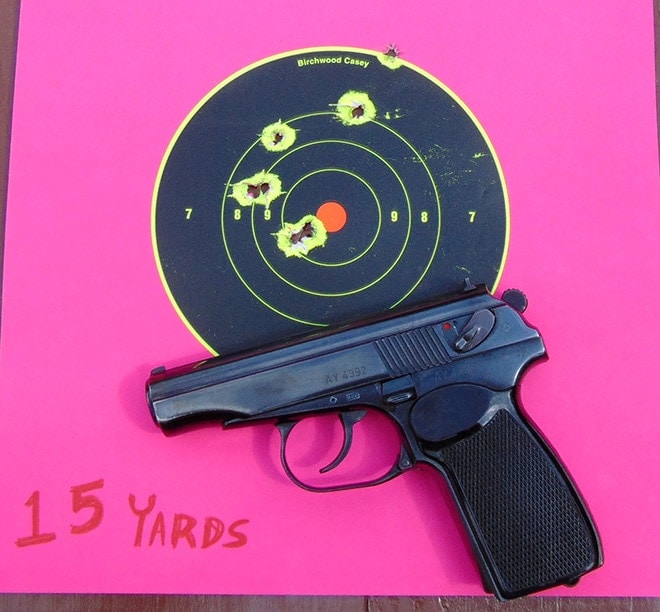 In my opinion, the Makarov PM is a too often overlooked concealed carry alternative. For the price of some new models, you get an all steel handgun in a proven design that did its bid for the state for decades and in some parts of the world, still does. The Makarov PM, while long since out of vogue compared to the new polymer wonder guns with their high capacity magazines, can still do everything today for the average person here in the land of the free and the home of the brave that it did for America’s enemies in the heyday of the Cold War.