Gun Review: The Smith & Wesson J-Frame is still a contender 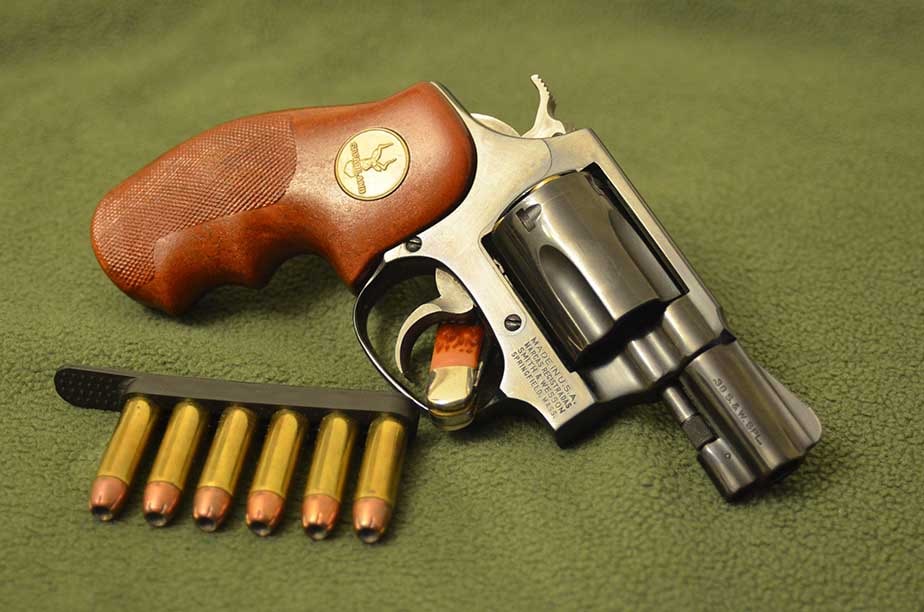 The Smith & Wesson J-frame may be an old design, but can still hold its own. (Photo: Kenny Hatten)

The last few decades have seen a significant leap forward in terms of light, powerful, concealable handguns, laden with features made possible by advanced technology and manufacturing. That being said, there’s still a case to be made for older designs that have stood the test of time, and that’s where the Smith & Wesson J-Frame comes in.

Introduced in 1950 at the International Association of Police Chiefs convention, where it was enthusiastically received, the J-Frame in .38 Special was designed as a replacement for the old I-Frame revolvers chambered in the comparatively anemic .38 Smith & Wesson. At the time of its introduction, it was dubbed the “Chiefs Special,” but later versions followed the Smith & Wesson model numbering system, with models 36, 37, 60 and all the way to the .357 Magnum versions of the present day.

For years, these compact, handy little revolvers were widely considered the gold standard for reliable backup firepower or as a main weapon for plainclothes officers, and the fact that Smith & Wesson is still producing variants of this little gun is a strong testament to their utility and popularity.

My introduction to the J-Frame came from TV and Hollywood, where you could see cops, criminals and other characters using these distinctive little guns to good (or bad) effect on the screen. My familiarization with these revolvers came as a result of my friends who carried them, and they were all unanimous in their praise of these diminutive, reliable wheel guns. 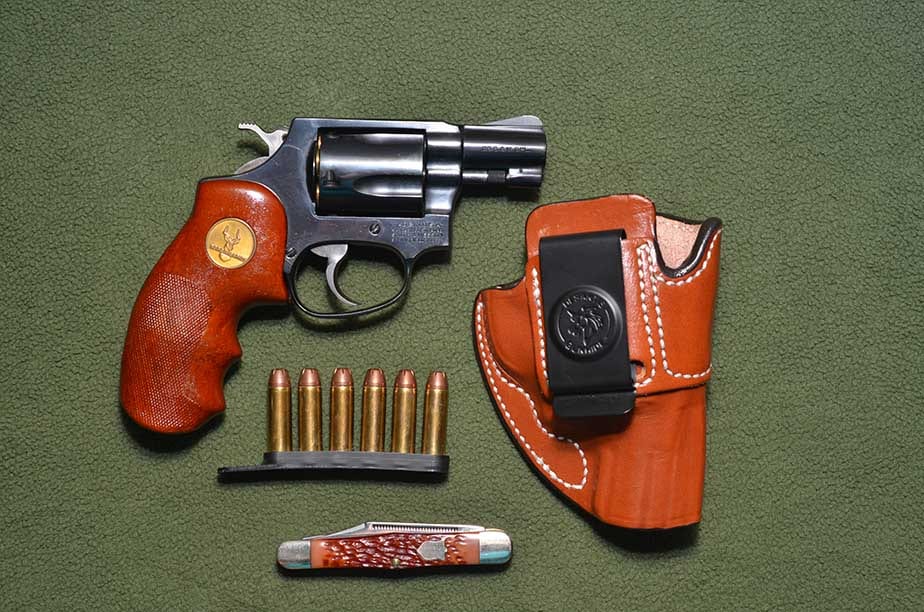 One aspect that might account for their huge popularity is the fact that they can be found for very low prices on the various gun forums and gun shops around the country. I found my Model 36 on AR15.com for the amazing low price of $300 shipped, and it was obvious when I received it that it had not seen much use – it had no discernible turn line on the five-shot cylinder and the original finish was at least 97 percent. Not bad!

At the range, this little gun never disappoints, and it shoots better than I can hold. I honestly didn’t expect great accuracy from a 2-inch barreled compact revolver, but as long as you mind your fundamentals, this little revolver is every bit as accurate as its larger cousins out to around 25-50 feet. This translates into even greater accuracy up close, where this little handful of .38s was designed to shine.

Carrying the J-Frame is a matter of selecting the right holster, and that’s where the real fun begins – they’ve been making holsters for these guns since the 1950s, so there’s no shortage of carry options, to say the least! My lovely wife surprised me on my birthday with a DeSantis Summer Heat inside-the-waistband holster, and it fits the bill quite nicely. Good used holsters can be had for these revolvers at very little cost, and some vintage designs from legendary names like Bucheimer, Bianchi or Berns-Martin are still useful to this day.

Reloads are the bugbear of revolver carriers, and you’re generally limited to three options: Thumbing in individual rounds, flexible plastic speed strips or switch-activated speed loaders. At the range, the first method will do fine, but in an emergency, you’ll want something faster with less “fumble factor” involved. Speed strips have the advantage of being extremely flat and easy to carry, but even with practice, they’re still a bit slow. One technique that you can use to get off a couple of quick shots is to “load two,” which involves loading two quick rounds, either by hand or by speed strip, closing the cylinder and cranking the trigger until the two rounds advance under the hammer, rinse and repeat as necessary. It’s an imperfect solution, but word is that it works in a pinch. The third solution is push-button or knob activated speed loaders from Safariland and HKS, which take a lot of the time and fumbling out of the equation, getting you back in the fight faster. 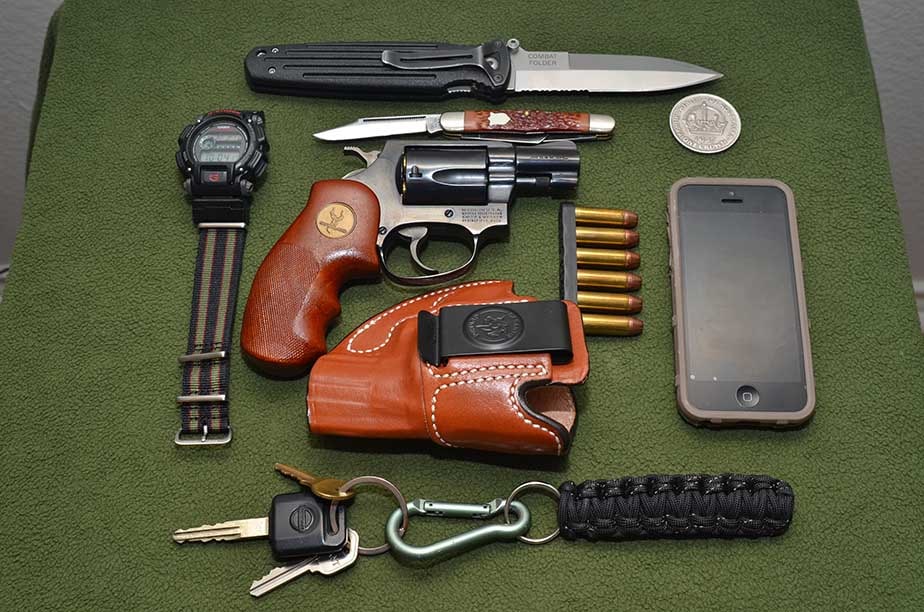 Practice is the thing with revolver reloads, because there is an art to doing it quickly and correctly. Practice as much as you can, preferably every day, because these things aren’t anywhere near as easy to reload as magazine-fed pistols, and time is definitely your enemy in an emergency. Very few of us will rival Jerry Miculek’s revolver reloads, but most anyone can get pretty fast with a bit of work.

On the subject of practice – It might seem obvious to experienced shooters, but I’m going to say it anyway: Snap caps, dummy rounds or even empty cases will help you master the art of the revolver reload, but make damn sure you separate your practice ammo from your live ammo, preferably storing the live rounds somewhere away from your practice area. Safety is something to keep in mind at all times when handling firearms, because it only takes one mistake to ruin your life forever.

Carrying your reloads can be as simple as tossing one or two speed loaders in your trouser pocket, but pouches are a better solution if you don’t like pocket lint mixed with your .38s. Plus, the cartridges don’t get beaten up by pocket change, pen knives or whatnot as they would by riding in your pockets. The problem with pouches is, they’re pouches – even a cursory glance at a double speedloader pouch on your belt will tell just about anyone that there’s bullets in there. If you wear a jacket or an un-tucked shirt, that’s fine, but tucked shirt wearers will have to be more circumspect. Carrying your reloads off-body might be an option, but as with anything, you have to experiment and find the solution that best suits you and your situation.

Needless to say, after carrying and shooting this little revolver, the inevitable question arises – “but, what if you get into a real firefight and you’ve only got that little gun and one reload?” Here’s the thing: statistically speaking, very, very few of us have even a small chance of getting in a bad firefight on the street. Even so, any gun is better than no gun at all. With that in mind, the little J-Frame is more than adequate to get the job done.