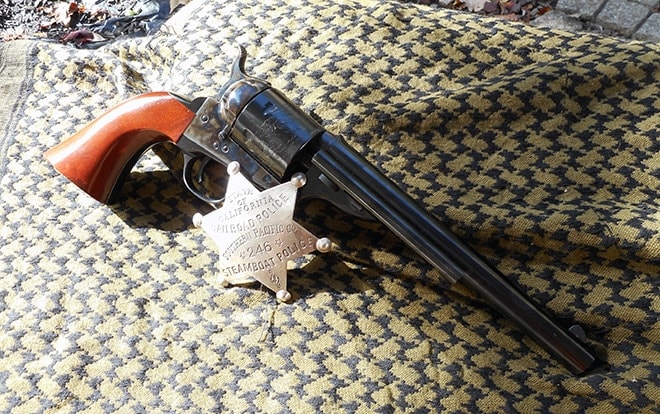 This lead me to Uberti’s replica of the Colt 1872 Open Top revolver chambered in .38 Special and imported by Uberti USA, Taylor’s & Co., and Cimarron Firearms. (This gun is also available in .45 Long Colt).  Although a footnote in history, the Colt Open Top revolver is a unique weapon and thus very attractive to me since I enjoy standing out from the crowd. 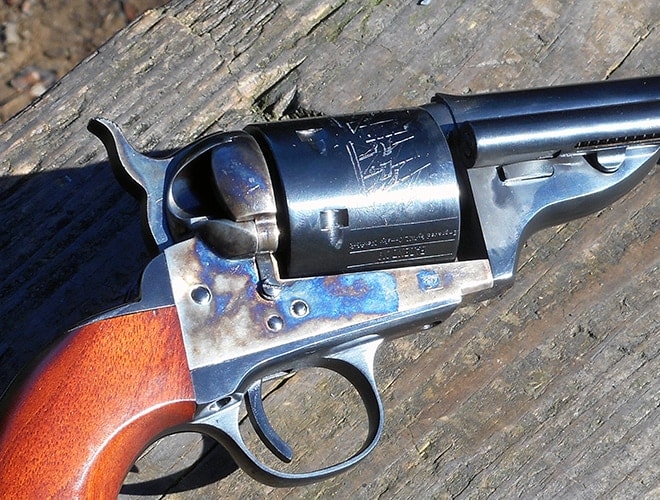 Because of the Rollin White patent, Colt was not able to produce a bored-through revolver cylinder until after 1870. (Photo: Francis Borek)

In 1870 several gun companies, Colt in particular, celebrated. The reason? Rollin White’s patent on the bored-through revolver cylinder had expired, an innovation that allowed shooters to load metallic cartridges from the rear. Smith & Wesson held this patent and, before it’s expiration, they had done so with a death grip. In fact, they put several smaller companies out of business through enforcing this patent and the US Army’s Chief of Ordnance even accused S&W of stifling handgun development.

It should come as no surprise then that, with the rise of cartridge firearms after the Civil War, S&W continued to dominate the cartridge handgun market. Colt barely remained in business, while Remington licensed the Rollin White patent from S&W for their New Model Army cartridge conversion. When the patent expired, however, Colt found that they could finally convert their massive stocks of cap & ball revolvers to fire cartridges. These were the Richards-Mason conversions and they breathed life into Colt’s handgun aspirations. 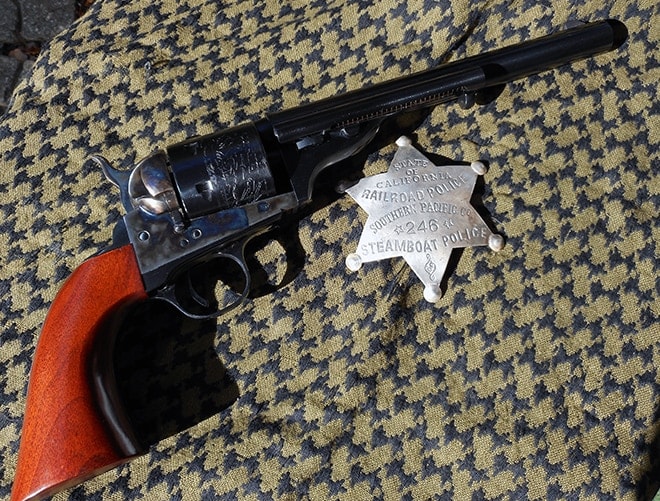 In 1871, Colt began producing a brand new cartridge revolver based off of the appearance and lockwork of the 1861 Navy. In 1872 they began production on a revolver with the grip frame of the 1860 Army. It was chambered in .44 Henry Rimfire; the same cartridge was used in the 1866 Winchester and 1860 Henry rifles. Alas, the next year Winchester introduced the 1873 Winchester lever rifle, chambered in .44-40 WCF. The US Army also disliked the 1872 Open Top’s open frame and cartridge. The Single Action Army was quickly developed and chambered in both .44-40 WCF and .45 Long Colt. The 1871 and 1872 Open Top revolvers quickly faded into the history books and were forgotten after an estimated 7,000 Open Top revolvers were made.

Luckily a renewed interest in Old West firearms and Cowboy Action Shooting in the early 90s prompted a resurgence in the cartridge conversion revolver. Although at first you had to send a cap & ball revolver off to have it converted by a specialized gunsmith, factory conversions from the Italian gunmakers would soon be offered. Soon enough, original 1871 and 1872 Open Top revolvers would be sent overseas so companies such as Uberti, Armi San Marcos, and Pietta could reverse engineer them. 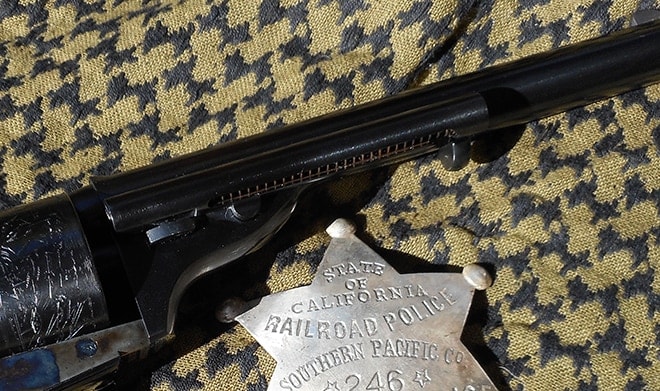 Patterned off the 1861 Navy, the Open Top replaces the loading lever with an ejector rod. (Photo: Francis Borek)

Although not as popular as the myriad of Colt Peacemaker clones, the Open Tops provide a nice and attractive alternative to the sea of SAAs and Rugers.  As stated above, a lot of the appeal of this gun lies skin deep—the appearance is striking and distinct. Colt wisely based their Open Tops off of the 1861 Navy revolver; which is possibly the most attractive Colt revolver ever made.

The Open Tops retain the ’61 Navy’s streamlined figure for the 7.5 inch barrel. Noticeably lacking is the loading lever, replaced with an ejector rod. Both the barrel and ejector rod housing are polished blue. In a nice historical touch, the barrel is marked for both .38 Special and .38 Long Colt. The frame, loading gate, and hammer are color case hardened with attractive and plentiful blue hues over an amber color. 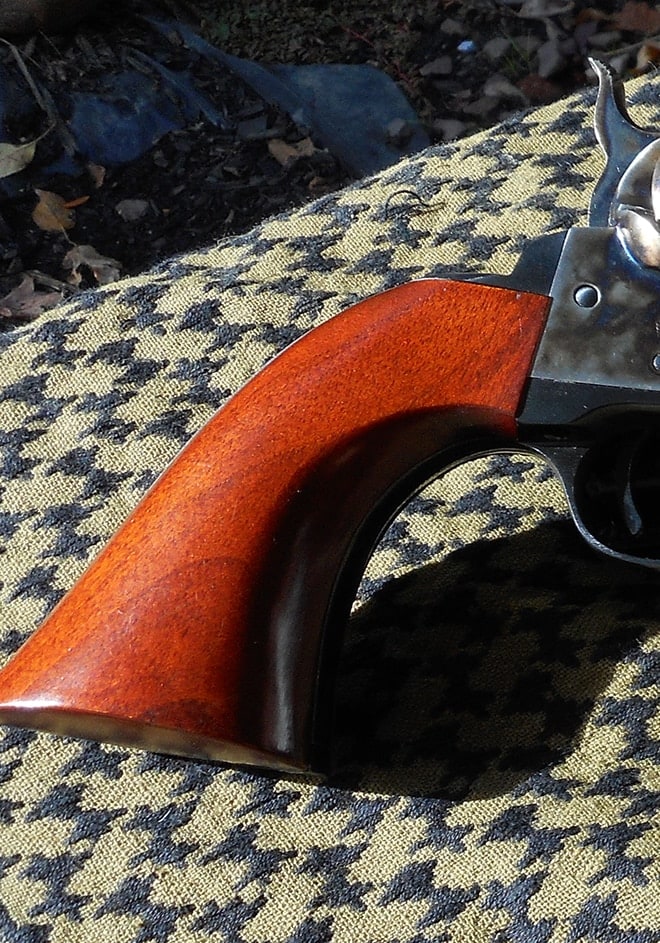 The smooth walnut grip is handsome but could do with some checkering. A bone grip is also available. (Photo: Francis Borek)

The grip frame is blued steel, while it is stocked with a one piece smooth walnut grip. It is finished in a red varnish that Uberti uses for all of their pistols and rifles. The wood finish is nice but slick, and can be hard for a sweaty hand to grip. A little bit of checkering would go a long way with this gun. Bone grips, though expensive would also provide an excellent contrast to the blued barrel and case hardened frame.

Disassembly is much different if you’re used to the Colt Peacemaker, clones thereof, and Rugers. Place the gun on half-cock and check to ensure it’s unloaded. Loosen the set screw holding the wedge in place on the barrel assembly. Now hammer out the wedge with a non-marring hammer and punch. Pull off the barrel assembly. Now just slide the cylinder off of the base pin. If you feel you should, the ejector rod assembly is held on with only one screw. This is as far as you’ll need to go for routine maintenance and cleaning.

Why own an Open Top revolver?

Because they’re fun. By reputation, revolvers fill out very well in the hand and they are quite accurate.  Single action revolvers have a shape that is instantly recognizable to anyone at the range as a “cowboy gun” and the sound of cocking the hammer is a distinct and wonderful—an experience that brings one close to firearms Nirvana. 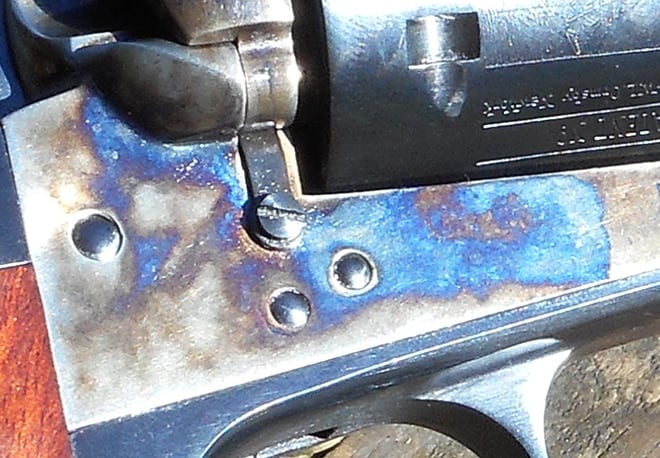 However, in my opinion, performance on the range is the primary reason to own one. Recently, I took mine to the range with the two handloads I use for this pistol, both with a 158 lead semi-wadcutter. (It was recommended to me to only use mild handloads or cowboy loads with this revolver and the manual strongly advises against using high-velocity or high-pressure ammunition). The smokeless load uses 4 grains of Trail Boss and achieved 1 inch groups. The black powder load consists of 17 grains of Goex FFFG and brought in 2 inch groups. These groups were from a standing one-handed duelist style shooting stance at around 7 yards.

When shooting an Open Top, it’s best to heed Wyatt Earp’s advice; take your time and aim. The rear sight is mounted on the barrel, one of the few revolvers in Colt’s history to feature this. The rear sight is also fixed in place, small, and very fine. For best accuracy, take your time. The trigger is light and crisp; always a nice thing to see on a pistol and it definitely helps with accuracy.

You will get the most fun out of this gun if you can appreciate the nuances and peculiar attributes to firing it. The 6-shot cylinder is slow to load and unload. While some might see that as a disadvantage, it helps to remind the shooter how far technology has advanced for his benefit.  It can also force a shooter to slow down and focus more on each shot, which is in line with the shooting advice I just mentioned.

The Uberti Open Top isn’t for everyone. However if you feel you can work with its limitations and you appreciate American history, it is an excellent piece to add to your collection for around $540. The Open Top revolver represents a forgotten time in firearms development, an era where muzzleloading firearms gave way to new fangled metallic cartridges. It is both unique and attractive, shoots great and feels good in the hand and harkens back to the post-Civil War period, when the West was truly wild.

It is slow, old, and obsolete. And that is exactly why I love it.