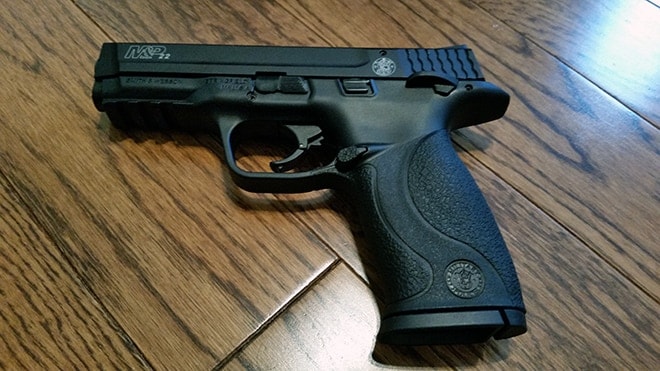 When I’m looking to buy firearms, I tend to follow the manufacturer’s’ lead and first categorize any products that catch my eye broadly by their intended purposes.

While it’s true that most guns have roughly the same purpose—to shoot bullets—unless you’re incredibly obtuse, it’s usually pretty easy to identify the activities the design lends itself to. In my mind, some major ones are training, hunting, competition, personal defense, and just for thrills or collecting. My second step is then to determine whether there are any reasons that would warrant one guns purchase over all the other firearms in a similar category.

And this makes the Smith and Wesson M&P-22 a bit tough to review because, depending on which lens you view at it through, it looks very different. 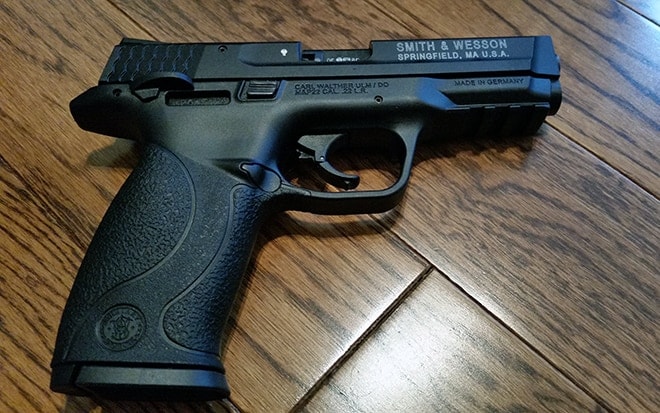 M&P-22, right side. The smaller ammo in a full size gun can lead to malfunctions. (Photo: Andy C)

The M&P-22 is a rimfire version of Smith’s polymer striker-fired full-size duty handgun. It weighs in at a spritely 1.5 pounds and comes with three replaceable backstraps that let you tailor the pistol’s feel to your preferences.

The centerfire M&P is an exceptionally popular handgun for a reason—it’s affordable, high-quality, accessible, and comfortable to shoot. The M&P-22 is a rimfire clone that takes many of the best attributes of the full-power design and lets it shoot the (sometimes) cheap, affordable, and popular .22 LR cartridge. This sounds like an ideal match in abstract.

Unfortunately this has some implications that mostly negatively affect this gun. Mimicking the full-size M&P’s slide means the anemic pressure of the .22 LR has to push that whole contraption back and forth, and not all .22 LR loads are up to this task. Factor in the greater variation in 22 LR ammunition from most centrefire ammo specs in pressures, nose profiles, and dimensions, and you have a gun that must expect to deal with a broad range of variables. 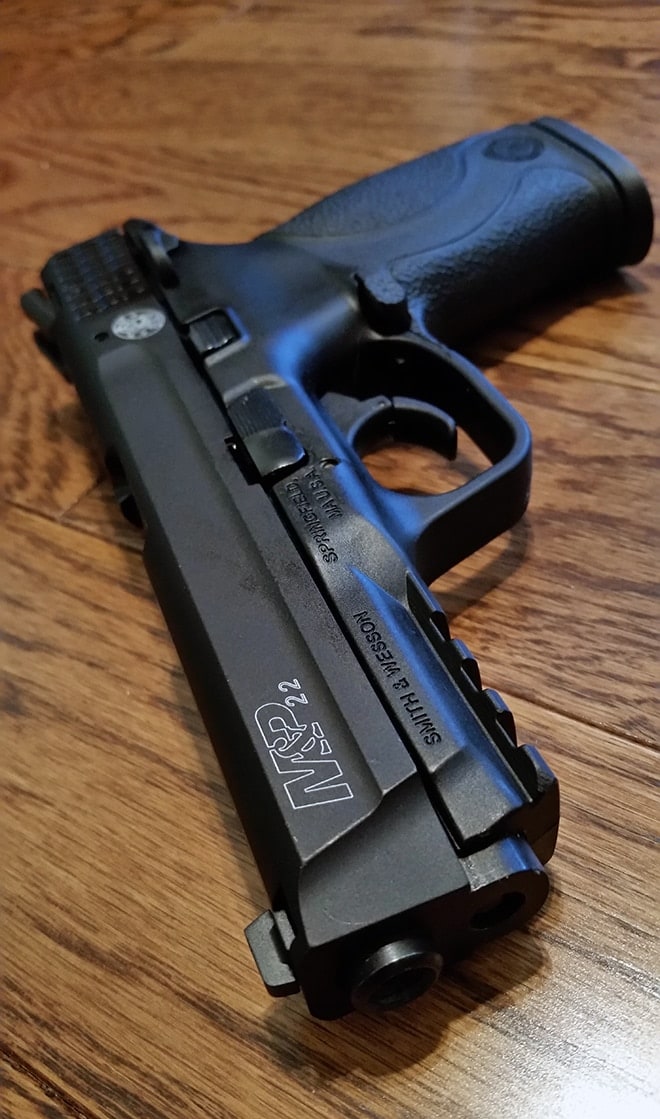 Ultimately, this leads me to the biggest issue I have with the M&P-22; it’s highly ammunition-sensitive. Testing it across a broad range of ammunition manufacturers, types, and weights, there’s only one type of bulk .22 LR ammunition that I found it feeds and shoots very reliably—Winchester M-22 ammunition. This ammo sees a malfunction less than once every hundred rounds, which I consider acceptable. Unfortunately, step out of this brand and the rimfire M&P exhibits feeding or ejection issues with frustrating regularity.

Speaking in generalities, when you’re looking at bulk ammo this pistol does best with 40 grain or heavier, round nose .22 bullets with copper plating. In most brands it will feed, fire and eject these reasonably well, but still has hiccups more regularly than I like to see (about one every thirty rounds). Once you start going below the 40 grain bullet weight or factoring in hollow points, things drop off dramatically in reliability.

Additionally, if you’re looking for bargain-basement and trouble-free shooting with the cheapest of the cheap bulk 22 LR brands, this is not the pistol for you. It fails repeatedly and stubbornly when challenged to digest Winchester Wildcats (which is disappointing) and Remington Thunderbolts (which no gun should really be subjected to anyway). With premium ammo the gun functions well, though it still has the occasional failure to feed.

Ammo sensitivity isn’t a death knell for many guns in terms of appeal. But to me, a gun like the M&P-22 is for recreational plinking with whatever ammo you happen to have on hand. It doesn’t carry the pretense of a highly-tuned match pistol and given the recent reality of .22 LR ammunition availability, I want my plinkers to be able to digest any brand I might be able to find. 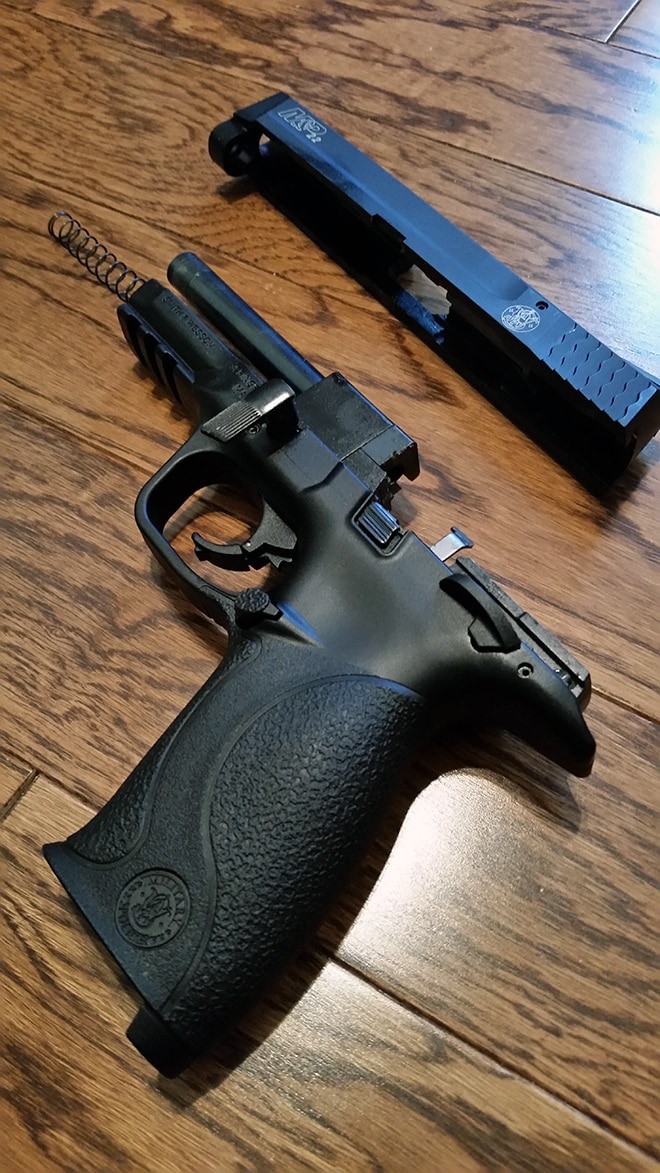 I wish I could attribute the ammo sensitivity to the magazine, but using any of my three mags and the mags of other M&P-22 owners, I get the same results and hear much the same from most owners.

Speaking of magazines, when you have a lot of ammo that’s functioning nicely, you’ll also immediately find yourself wishing a second magazine was included. A search for more may be troublesome—I waited for almost a year to be able to find extra magazines for this firearm and they still aren’t cheap, though at least as of this writing they are available online.

There’s not much to say about the mags. They’re pretty standard .22 LR pistol mags with a thumb slide that works fine. It’s worth noting they’re easier to top up than Buckmark or Ruger MK. III mags.

The trigger of the M&P-22 also closely mirrors it’s centerfire counterpart—it’s soft, mushy and has an abundance of creep with an indistinct reset. On the plus side, it weighs in at about 4.5 pounds. I personally find the stock trigger on this gun is passable at best, lagging behind many of it’s competitors.

The sights are a rear-notch and front-dot affair, and it comes with one ten-round magazine. (Of note is that the M&P-22 has an ambidextrous slide lock and a safety.) Here is a small complaint—the safeties on both sides are kind of large wings that are also pretty stiff to engage and disengage. They aren’t especially comfortable or easy to use. A minor mark against the gun, for sure, as you could use it without even engaging them.

I can’t say anything negative about the gun’s shooting performance, which has been perfectly reasonable. I won’t bore anybody with the details as I don’t shoot it from a Ransom Rest but I am quite capable of blasting Post-It notes into oblivion at 15 yards with every round in the magazine and good ammo, which is all I’d ask for.

After all this shooting, the M&P-22 gets as dirty as you’d expect from a rimfire pistol that gets a lot of rounds put through it. Fortunately, it’s easy to clean just like it’s big brother with a very simple takedown procedure and no odd angles to try and cram a brush or Q-Tip into. I must say after cleaning some Ruger Mk. IIIs this is a welcome change.

I just spent several paragraphs essentially griping about the gun, and I stand by those criticisms. So, as I mentioned at the start of the article, what role does an M&P-22 fit in a firearm owner’s collection? Who can buy it and overlook the shortcomings and end up entirely happy with the their purchase? The M&P-22 faces stiff competition in the rimfire autoloader world from established firearms with proven track records and better aftermarket support. 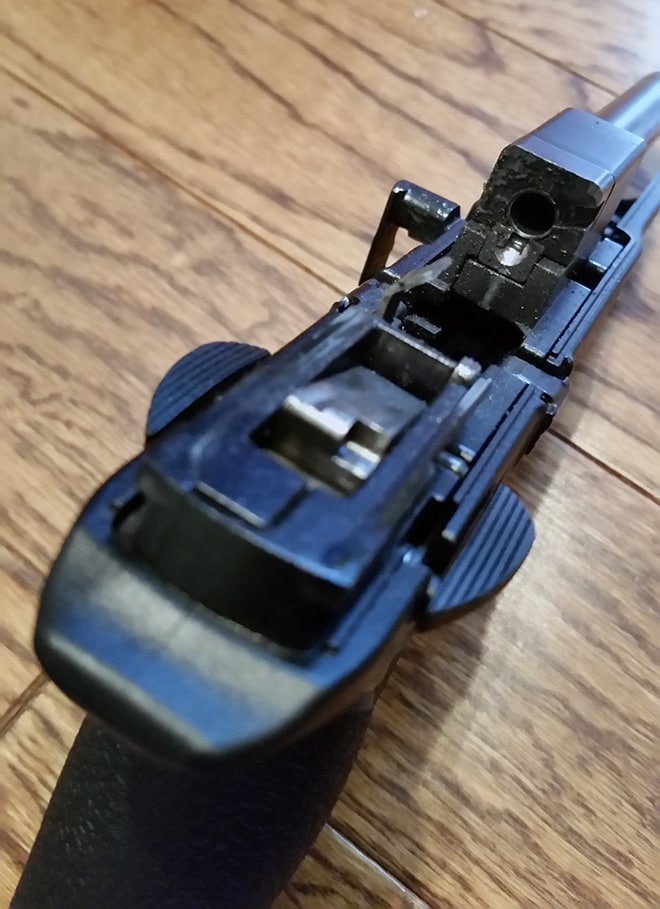 M&P-22 interior. Unfortunately, I experienced malfunctions even with the best .22LR ammo I could find. (Photo: Andy C)

There’s one very obvious group of people who should be interested in this gun; owners of the centerfire M&P pistols. For them, this makes good sense as a rimfire trainer as long as 22LR prices and availability stay sane. It’s a very similar experience minus the recoil.

Another group of people are those who simply don’t like the “space gun” look of most modern rimfire pistols. If you fit into that category, I wouldn’t fault your choice here. I think the M&P’s ammo pickiness is about the same as many other guns like it modelled after full-sized service guns. If you like the M&P design more than the very common rimfire 1911 to boot then it’s a pretty clear pick here.

Otherwise, I’m hesitant to recommend this gun. For training, it’s a passable performer eclipsed by the alternatives unless you’re in the aforementioned group of M&P owners. In hunting, I would virtually always prefer a Buckmark, S&W Model 17 or Ruger Single Six. This is clearly not a good choice for a defensive firearm for anybody. For competition, I can’t think of any type of competition where it isn’t outclassed.

To me this seems to be designed as a plinking gun and I’d have to lie if I said I haven’t liked shooting it a lot. But to my eye there are simply better guns in this category for about the same price. Unless the aesthetics are a huge factor, those “space guns” are designed that way for a reason: they work very well. This isn’t to say the M&P-22 is a mess that should be avoided at all costs, but I would recommend thinking over what you want it for very thoroughly before buying it.