In the dark days of World War II, the British SOE and American OSS ran a myriad of operations behind the lines in both Nazi occupied Europe and Japanese occupied Asia. They set up resistance groups of local insurgents and supplied them with weapons, training, and equipment to help set the Axis rear aflame. One of the weapons they supplied was meant especially for assassination. This mysterious suppressed pistol was known (we think) as the Welrod. 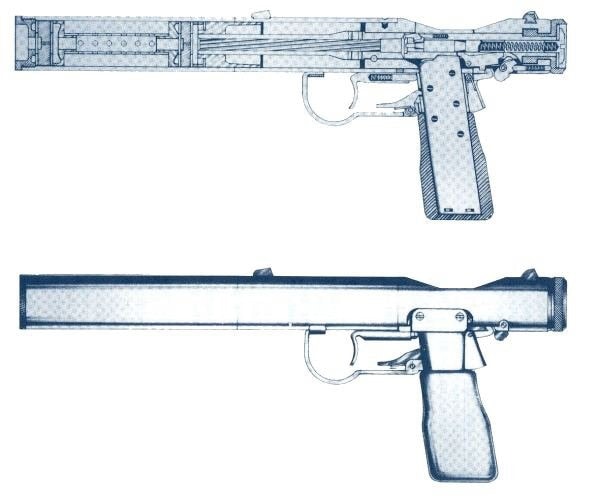 The firearm developed by the SOE was not a traditional pistol fitted to a silencer—it was a pistol built around a silencer. To keep gas from escaping from a cylinder like on a revolver or a cycling action like on a semi-automatic, the Welrod was bolt action. The simple and effective bolt action could be worked rapidly for a follow-up shot if needed, and doubled as a safety device. The integral suppressor built around the barrel was made up of 12 thin metal washer baffles separated in groups by three leather wipes.

The baffles would start to deteriorate with use and typically was no longer suppressed after about 15-20 rounds. The nose cap of the suppressor was hollowed out to allow it to be pressed into an intended target without undue back blast. The magazine itself, encased in a rubber sleeve like a bicycle handle, formed the pistol grip. With few moving parts, it could be broken down and stored in pieces that did not resemble a firearm. In fact when disassembled it rather looks like a bicycle pump.

It was made in two varieties, the MkI and MkII.

Chambered in both the British and German army’s standard submachine gun round, 9x19mm 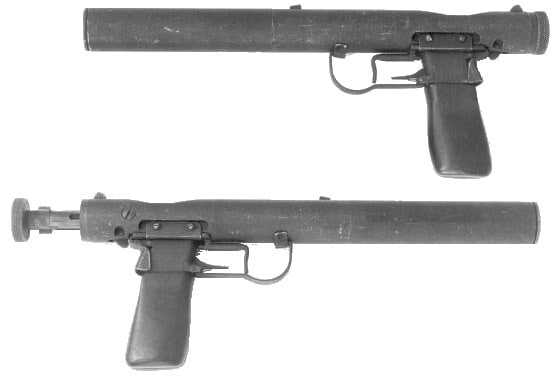 The Welrod MK I looked inconspicuously like a bicycle pump.

Parabellum, the MkI could draw from captured ammunition stocks if needed. The MkII did not have a trigger guard and boasted an overall length of 14.22-inches and a weight of 52-ounces when assembled. Its single stack magazine held six shots.

The size kept it from being favored for use with resistance groups so the British tended to keep these around for issue to their own commandos and scallywag types. It is thought that some 2800 of these 9-milly Welrods were produced and by most accounts were used in almost every official and unofficial war that Her Majesty’s operators have been involved in since 1943.  A few examples are thought to be have even been retained for use today.

Actually made before the MkI (dont ask), the MkII was the most common type of Welrod with some 14,000 produced.  It was rather heavy for a weapon designed to be secreted away at 38-ounces and was

Welrod MK II could make use of captured German, Italian and Japanese ammunition.

slightly over a foot long. Chambered for .32ACP (7.65x17mm), the same caliber as many popular Italian, German, and Japanese pistols, the gun was stated to be able to fire a 72-grain Kynoch lead head at 920fps. Its single stack magazine held 8-shots.

The German military captured many of the weapons dropped to European Resistance groups and the MkII Welrod was often in these caches. The SS special operations groups led by Otto Skorzeny (called once the most dangerous man in Europe) are known to have carried the occasional Welrod. A number were given as reverse-Lend Lease to the US Navy who referred to them as “.32 Hand Firing Mechanism Mk.1 Mod 0” to obscure its use as a weapon of special applications. Many of these later were passed on to the CIA.

A Black Hole of Information

conjecture and is a question that has never been definitively answered. Even the name ‘Welrod’ has never been fully explained other than in urban legends that have found their way onto the Internet over the years. While small resolution diagrams abound, the full and correct set of manufacturer’s blue prints have seemingly never been declassified. Additionally, the guns were almost completely unmarked so they could be deniable if captured. It is thought that BSA made the Welrod production pistols, although this information is still classified.

One prevailing theory is that the individual parts were all farmed out and made by separate companies, then final assembly done by the SOE. If it wasn’t for the fact that no less than 100 examples of this gun exist in military museums, around the world, it could be argued that it is the Bigfoot of the firearms world.

The Legacy of the Welrod

Even though supposedly some 16,800+ of these suppressed shooters were produced, they don’t exactly 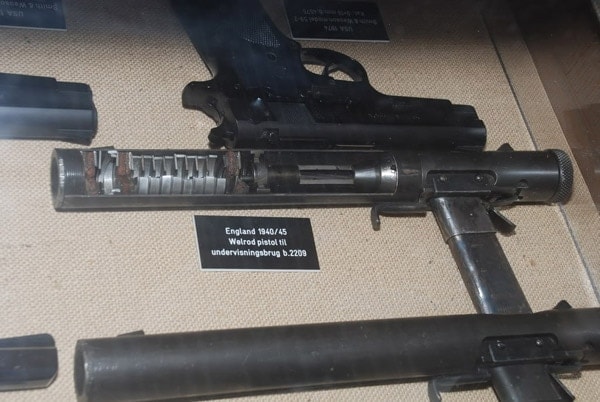 turn up very often. A few examples that were declared before 1968 are around and can be transferred through a Class III dealer. Generally, those that aren’t Class III transferable, are still going to be worth the 5 years and $10,000 to serious collectors.

The Welrod has attracted legion of admirers and scholars around the world who have lost sleep thinking about the mysteries surrounding this phantom gun. Many have attempted to make their own workshop versions of the pistol though the Welrod seems often imitated, never duplicated. In the 1960s Mitch WerBell, the moustache behind SIONICS, produced a few of his own examples but, like the original, not much is known about them either.

Thinking about it, print this article, before it self-destructs.