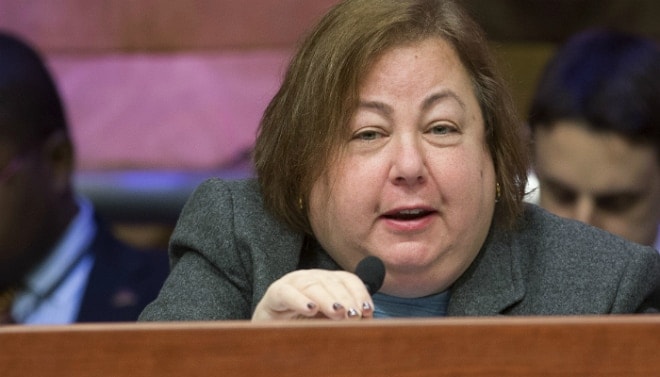 One of the biggest champions for gun control in the Empire State, State Sen. Liz Krueger, D-Manhattan, is advocating taking over the National Rifle Association from the inside.

After broaching the subject in a round table discussion with U.S. Rep. Carolyn Maloney, D-NY, who is a fan of anti-gun legislation at a national level, Kruger repeated it for clarity to the New York Daily News.

“Perhaps if we all join, we could take over that group and start a new (gun control) platform,” Krueger said. “I think we outnumber the people who are members of the NRA and are so totally opposed to any kind of rational gun laws.”

Krueger, who in the past has advocated cutting state subsidies to historic New York’s gun manufacturer Remington and helped sandbag a move to allow Empire State residents to register to vote while getting their hunting license, earlier this year cried foul when her bill to bring mandatory gun lock laws to the state tanked in the Senate .

Founded in 1871, the NRA is the largest gun rights group in terms of membership in the country, with some five million dues-paying members on its rolls. As a reflection of that, in terms of social media followers, the group counts some 4,358,314 people on its primary Facebook page alone. Its leadership is determined in annual meetings in which members cast ballots.

By comparison, the largest and most well-known gun control organization, former New York Mayor Michael Bloomberg’s Everytown for Gun Safety, has 904,381 Facebook followers, and does not charge for membership though will gladly accept donations.

As for concerns that enough anti-gunners would join the NRA en masse and effect a take over from the inside, morphing the group into something akin to Everytown on steroids, New York State Rifle and Pistol Club president Tom King scoffed.

“I’m not sure where they’re going to get the people from, but it’s America: if they want to join the NRA, let them join. We’ll take their money,” King laughed.