Exclusive: Inside the Army Museum Support Center for a peak at the rare stuff (PHOTOS) 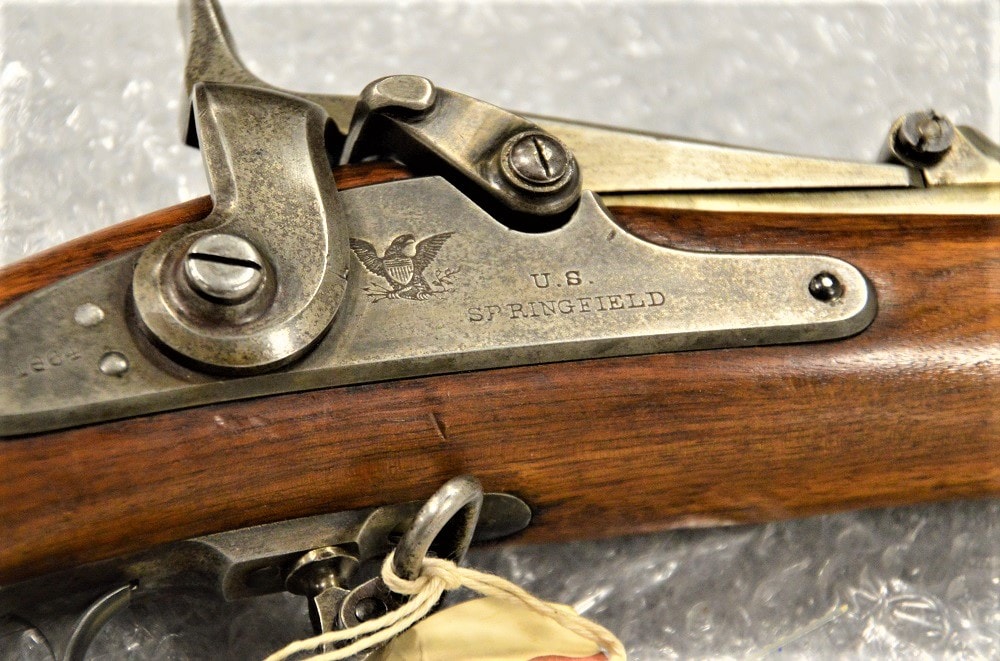 This vintage 1864-made cartridge conversion Springfield has been Army property since the Lincoln Administration and is one of 13,000 historic small arms in storage at Anniston. (Photos: Chris Eger/Guns.com)

We recently had the chance to tour U.S. Army’s Museum Support Center at Anniston Army Depot, the keepers of the flame for military history in the country.

The 15,200-acre installation in North Alabama was established in World War II and overhauls both small arms and vehicles for the Army. A longstanding tenant on the sprawling base, based out of Building 201, is the Museum Support Center, operated by the Center of Military History. The CMH maintains an immense collection of 650,000 historic items across 228 sites including 57 large museums that are a part of the Army Museum Enterprise. Items not yet on display, waiting for a public home, or are excess to current museum needs are stored in the “Army’s attic” in Anniston.

Once relegated to a more primitive existence, the Anniston operation started in the 1980s when the Army moved its museum storage there from Pueblo, Colorado. Until 2012, the center had only four employees to manage a collection that looked like the warehouse scene from Indiana Jones.

That’s been changing as Army museums across the country move towards elevated standards and work proceeds on the new  National Museum of the United States Army.

“The Army is trying to do the right thing,” Lt. Col. Trent Klug, the MSC’s boss, told Guns.com on our tour of the facility.

Klug, a tall, clear-eyed officer with a combat infantry badge on his chest and a 7th Infantry Division patch on his right shoulder, said he jumped at the chance to move to Anniston and work in the center. For him, an avid history buff and veteran, a lot of the artifacts have a deep connection, such as the unit flag of his last battalion, now in storage at the facility.

In secured storage at the MSC are 13,000 live weapons of all sorts, ranging from 13th Century Ottoman gear to guns captured recently in Afghanistan. 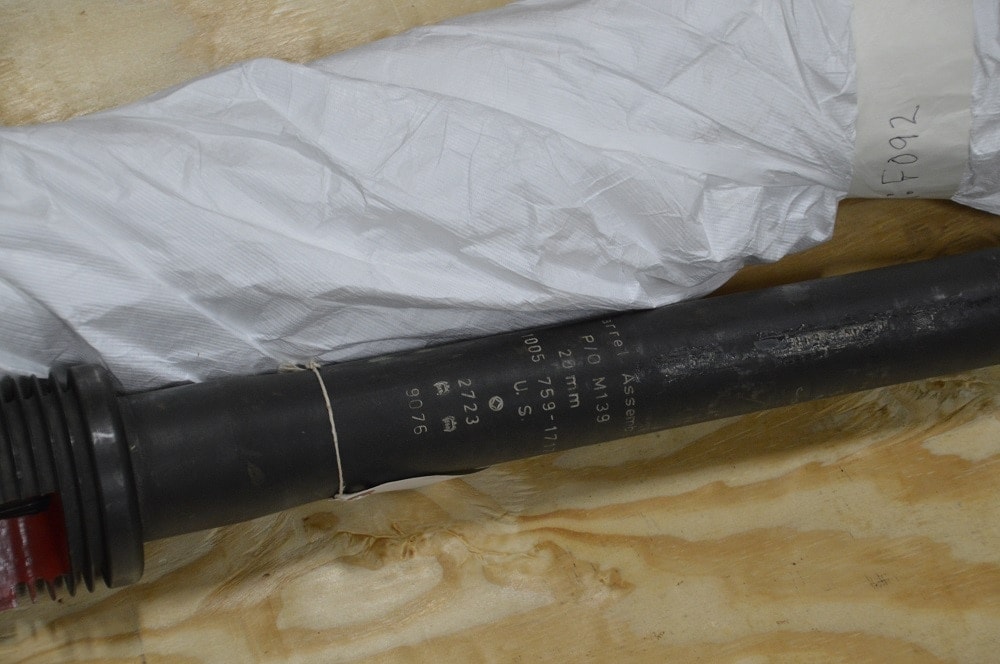 An M139 20mm cannon barrel, brand new and still in the protective wrap, only opened to verify the serial numbers. 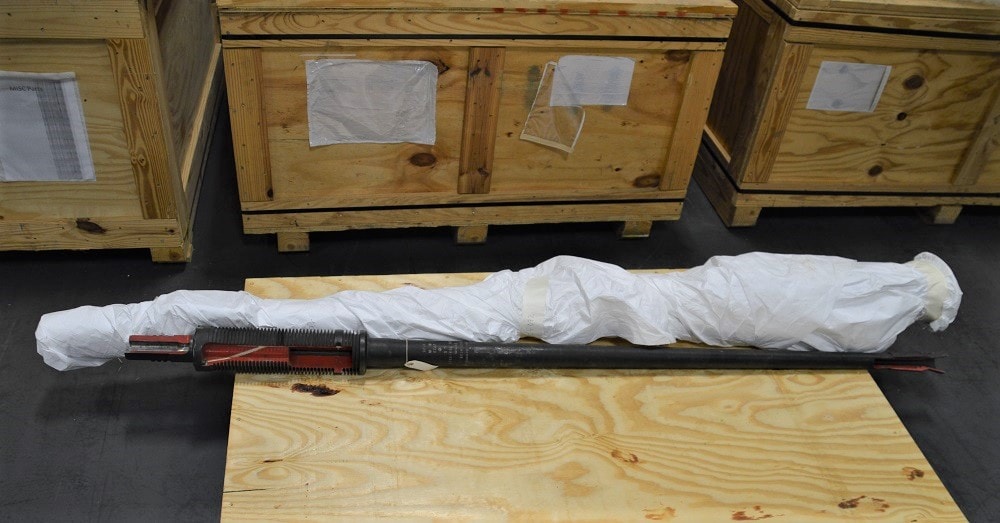 A US-built version of the Hispano-Suiza HS.820 20 mm gun, the M139 was last used on the M114 armored fighting vehicle which was retired in the 1970s. Note the wooden crates in the background of the sort being phased out. 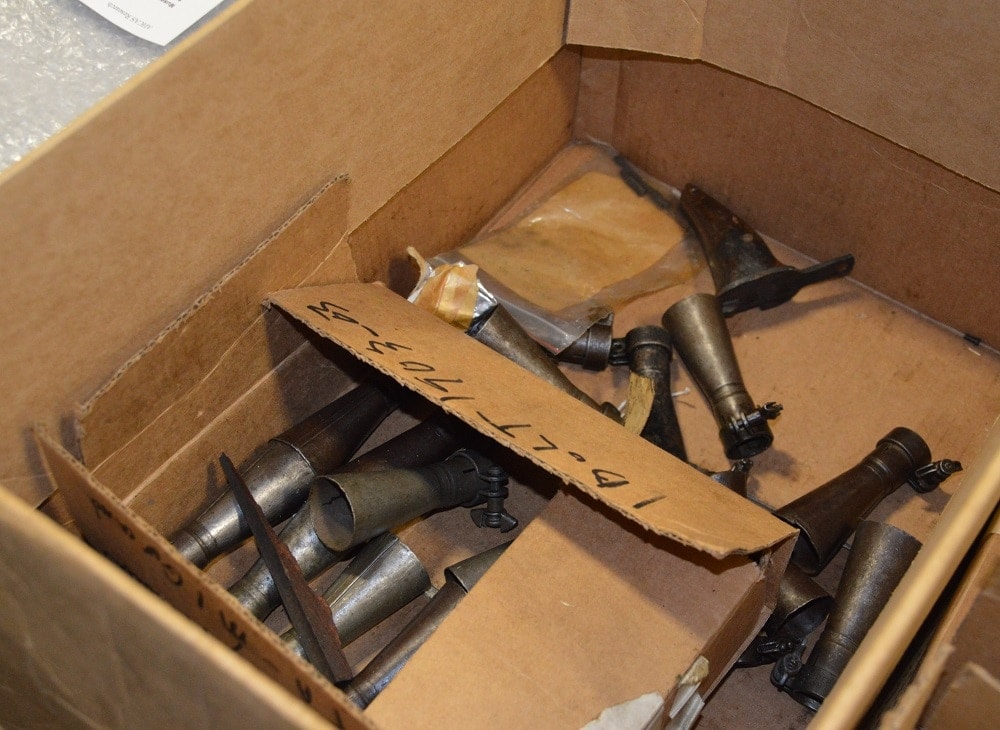 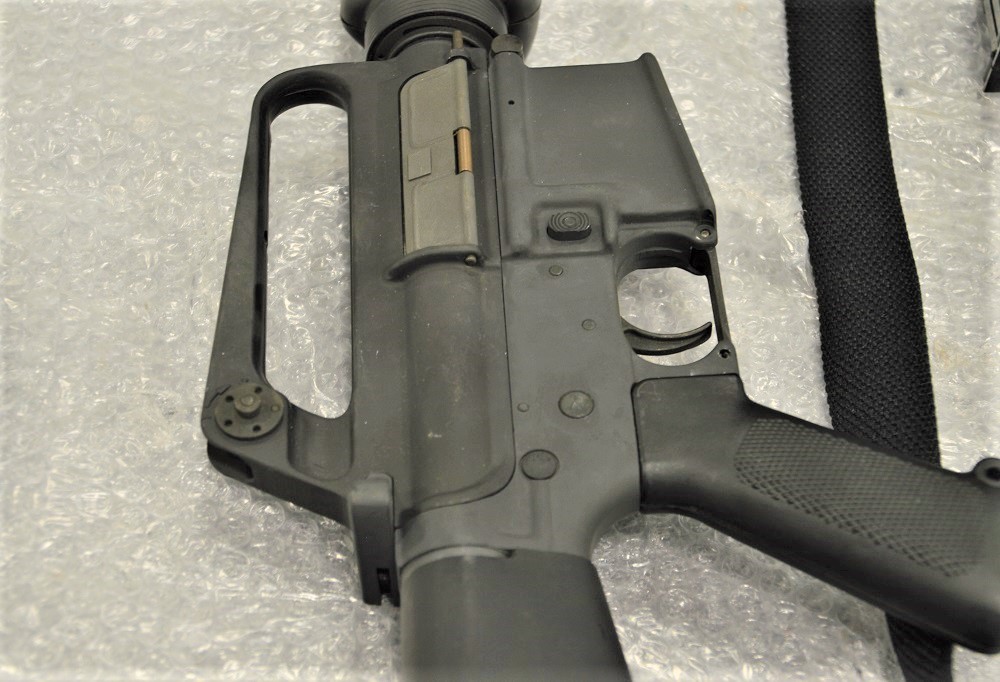 An early production (six-digit serial) Vietnam-era Colt M16 (marked AR-15) from back in the days before they came with a forward assist. 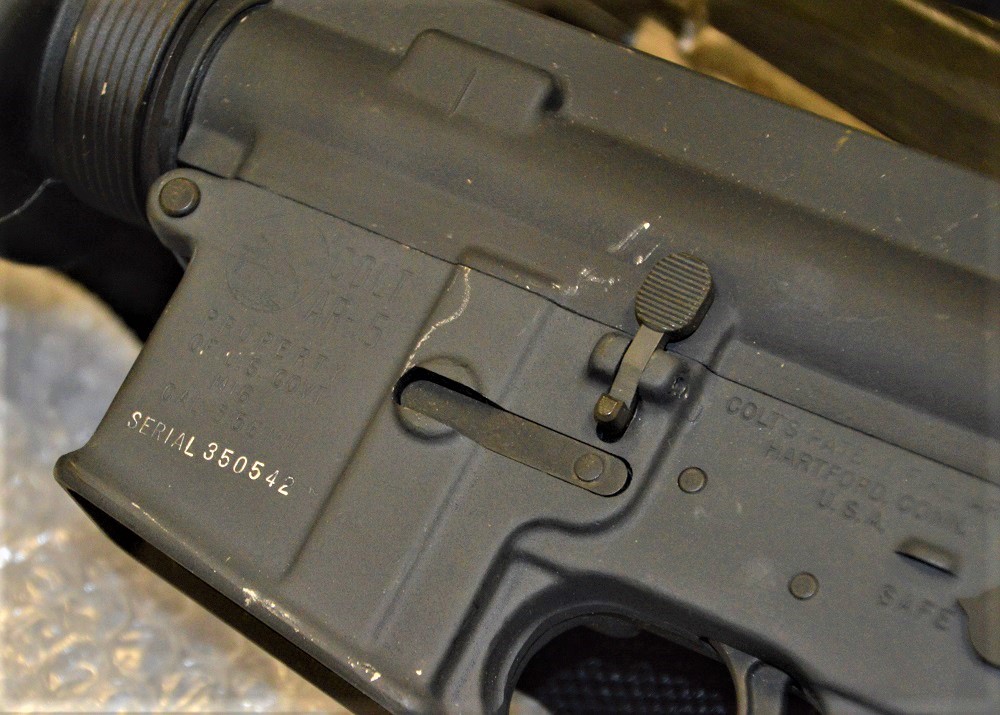 The serial number range makes it an early Air Force contract Model 3 style gun. Note the large “AR-15” logo a the top and the smaller M16 roll mark above the serial. 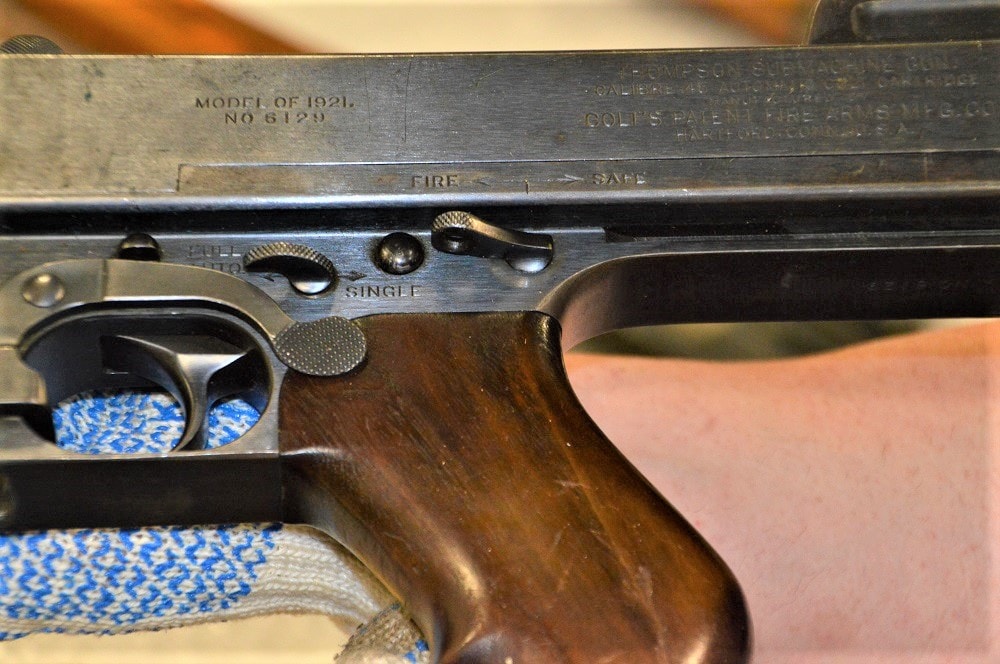 One roll markirst run of Colt M1921 commerical Tommy gun models (not an overstamp!) made for Thompson’s Auto Ordnance company during Prohibition. The Army picked up all they could in the early days of WWII before the M1 Thompson was placed into production. 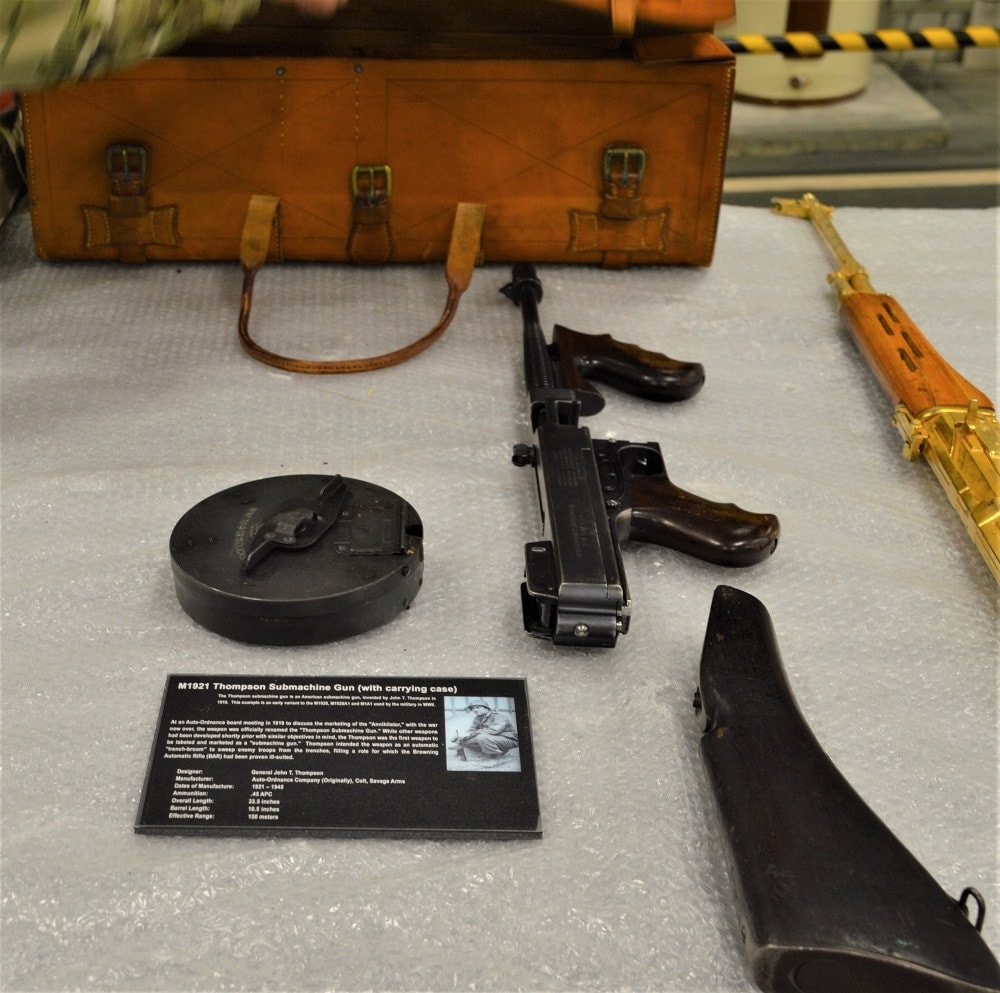 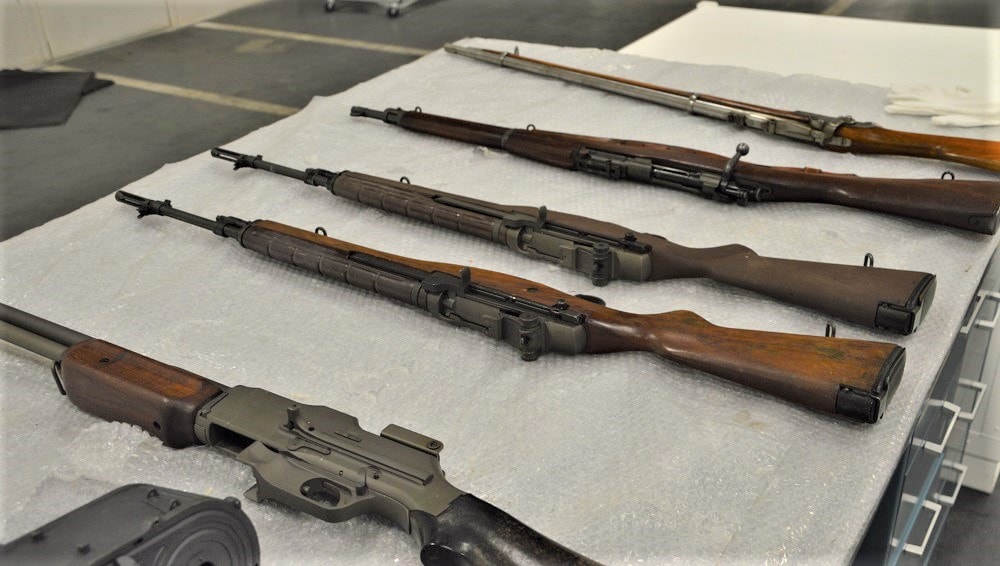 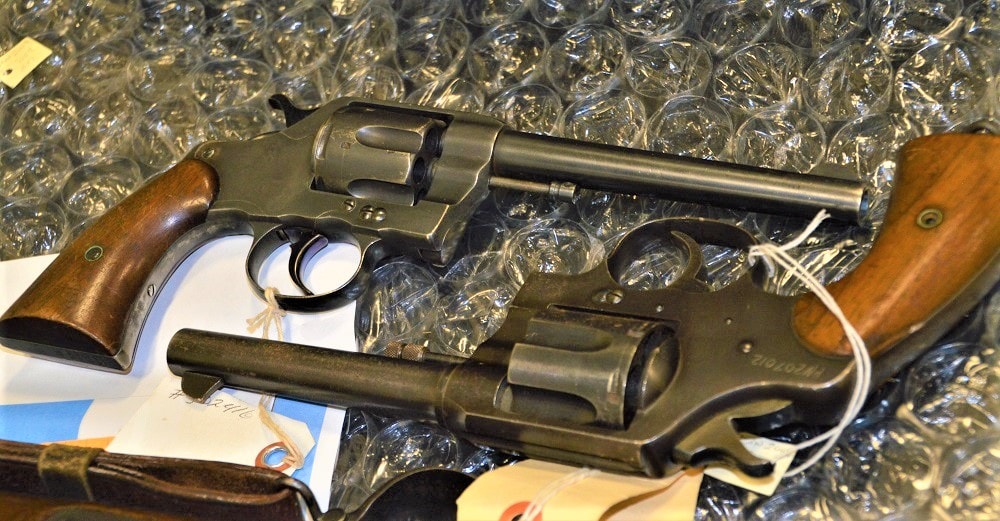 The Army has made an active effort since the original Information and Historical Service Teams were started during World War II to deploy to the theaters of operation to a sharp eye out for artifacts. This has evolved today to Military History Detachments which collect interviews, documents, photographs, and relics documenting the Army’s ongoing operations both in war and peace. This includes preserving both U.S. arms and gear and those of her enemies to include uniforms, equipment, weapons, and vehicles.

This means the collection at Anniston is perhaps unparalleled. Odds are, if the U.S. Army has ever encountered a weapon overseas, a battlefield-fresh example exists in Anniston. 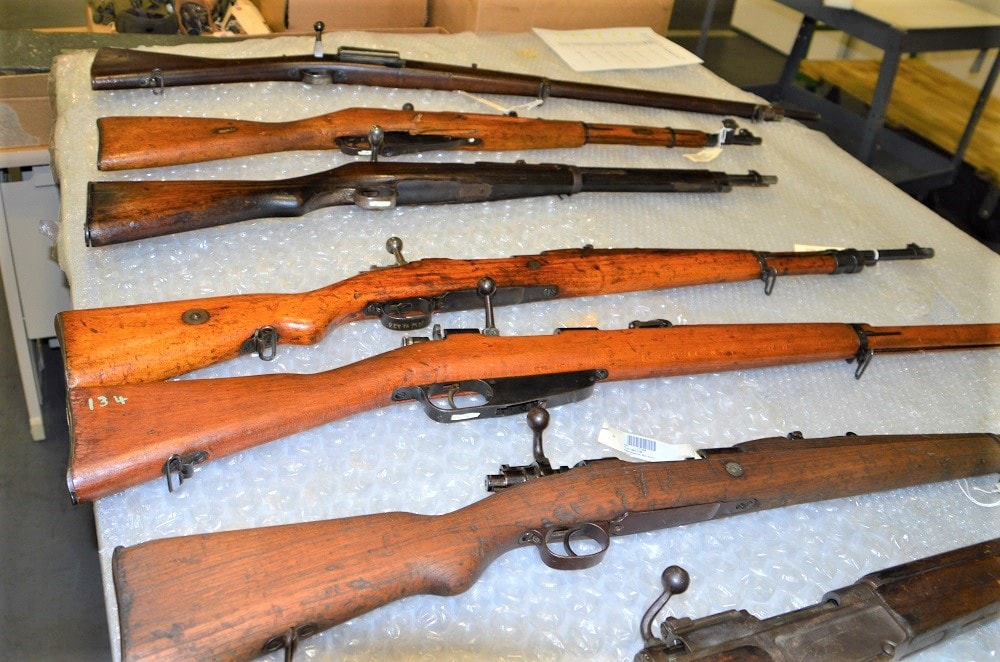 A selection of captured bolt-action infantry rifles from around the world. 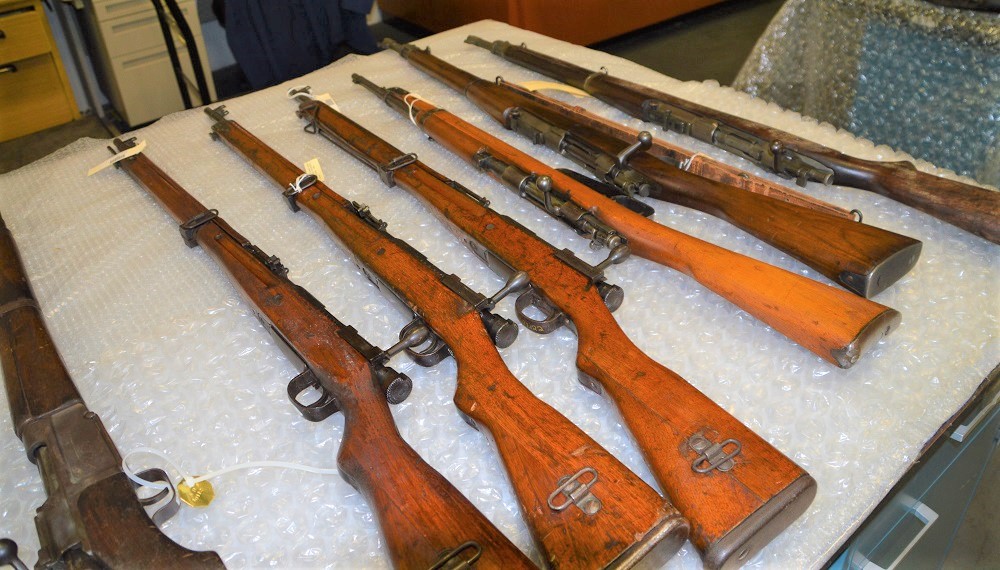 How many can you identify? From French to Japanese and Italian guns all in one sampling. 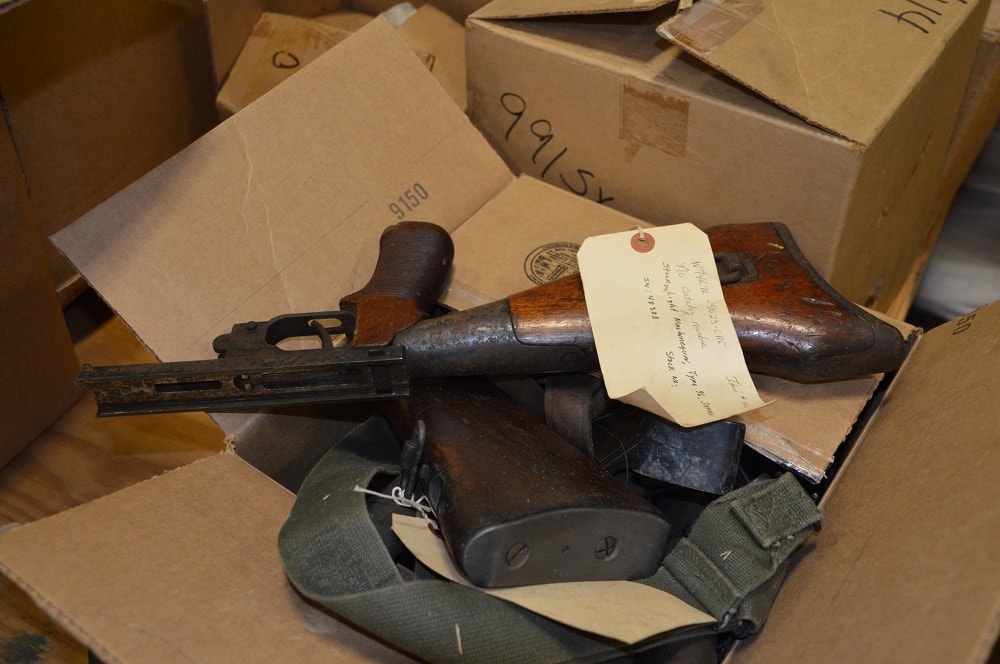 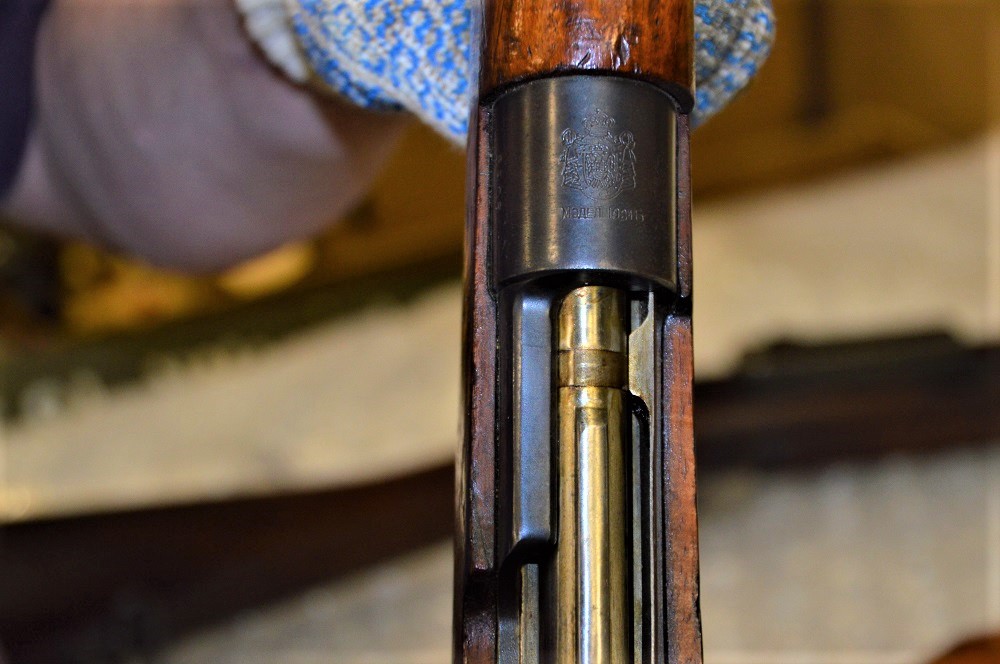 A Yugo Model 1924 Mauser short action. These were common in Bosnia and Kosovo 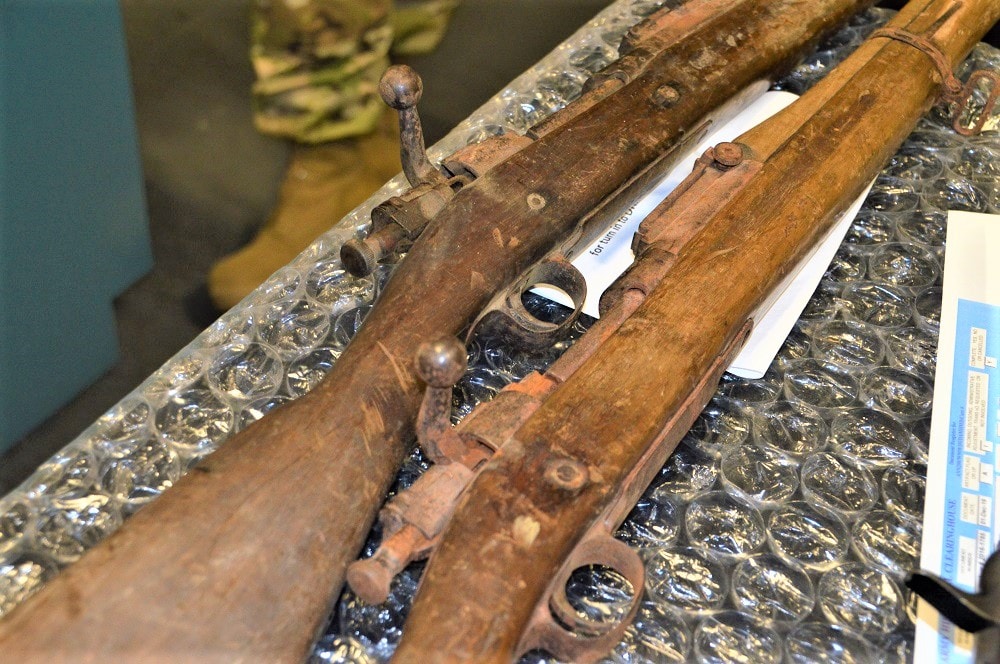 These early M1903 Springfields were captured in Haiti in recent years, likely the result of guns given to the island republic in the 1930s when the U.S. established that country’s military. 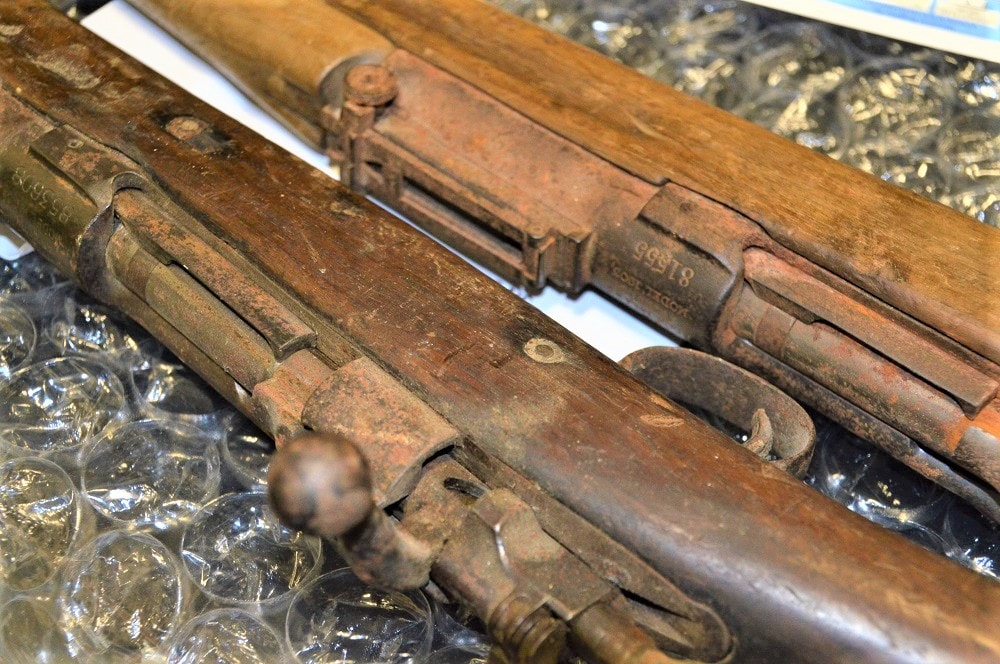 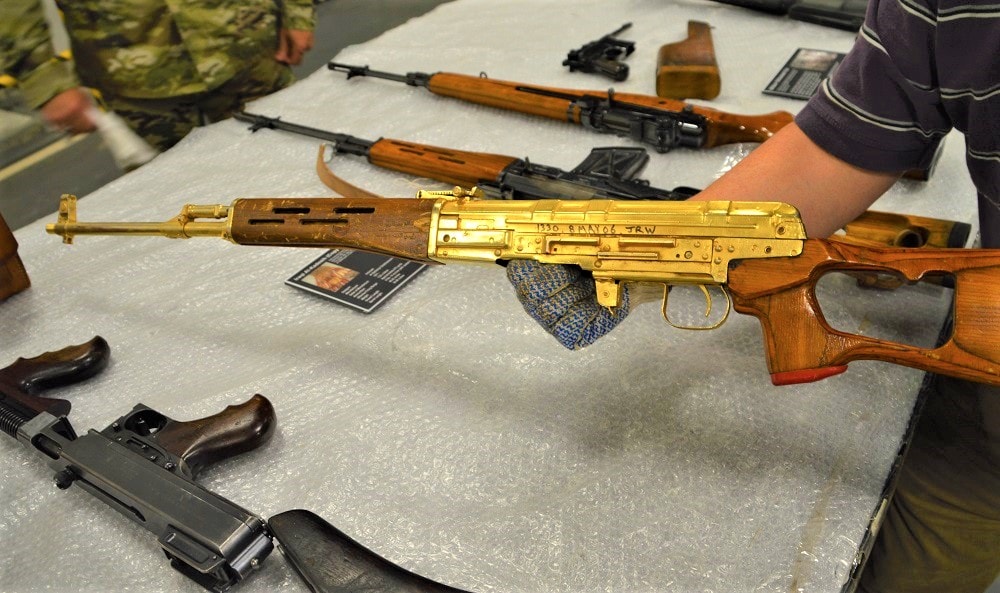 How about a gold Iraqi SVD variant captured in 2006? 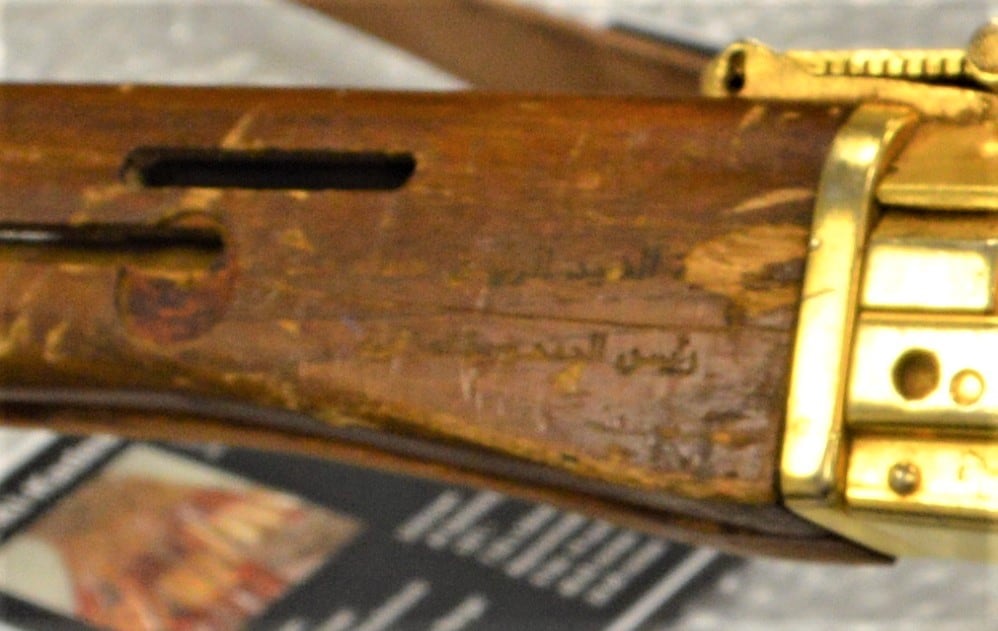 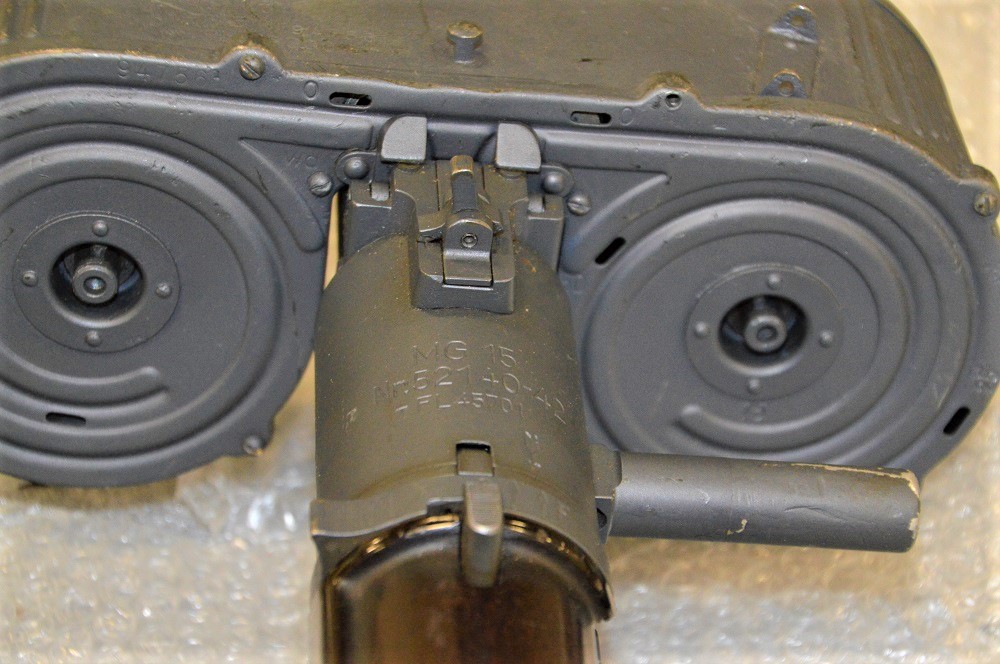 This German MG 15nA with its 75 round “saddle drum” mag was the standard defensive machine gun in early Luftwaffe bomber aircraft. 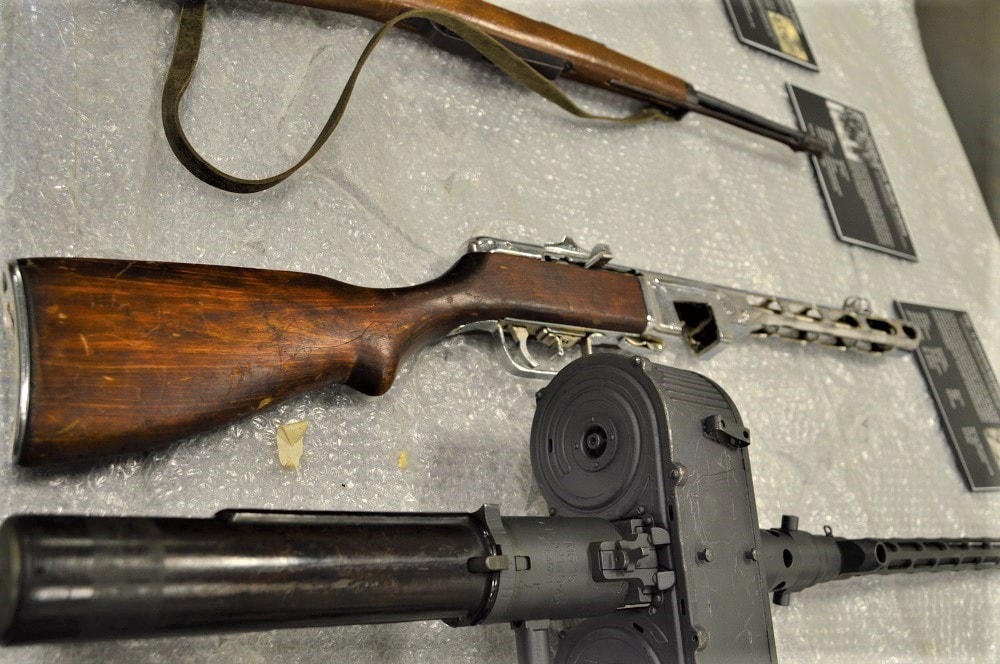 The chromed Soviet PPSh-41 sub gun next to the MG15 was captured in Bosnia in the 1990s. 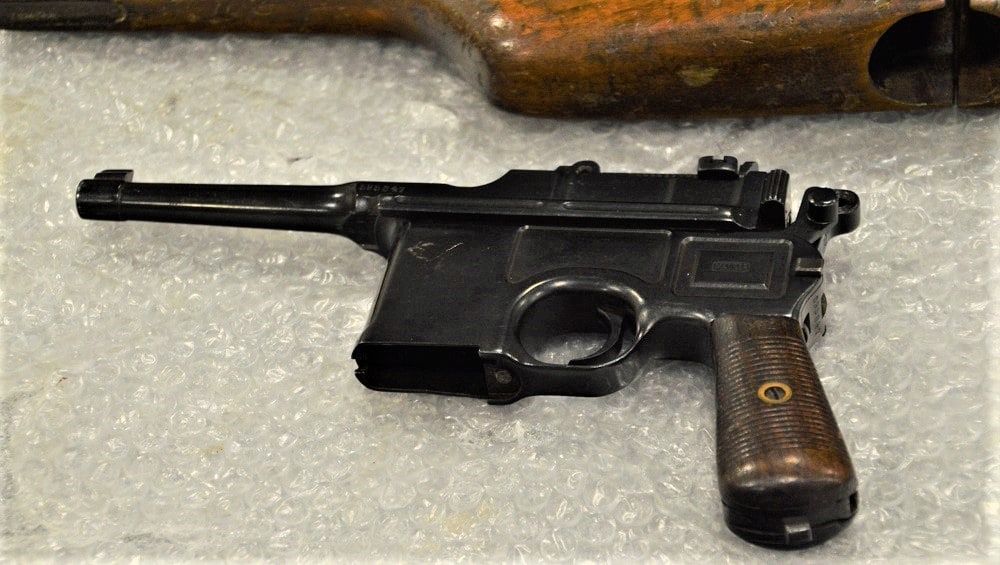 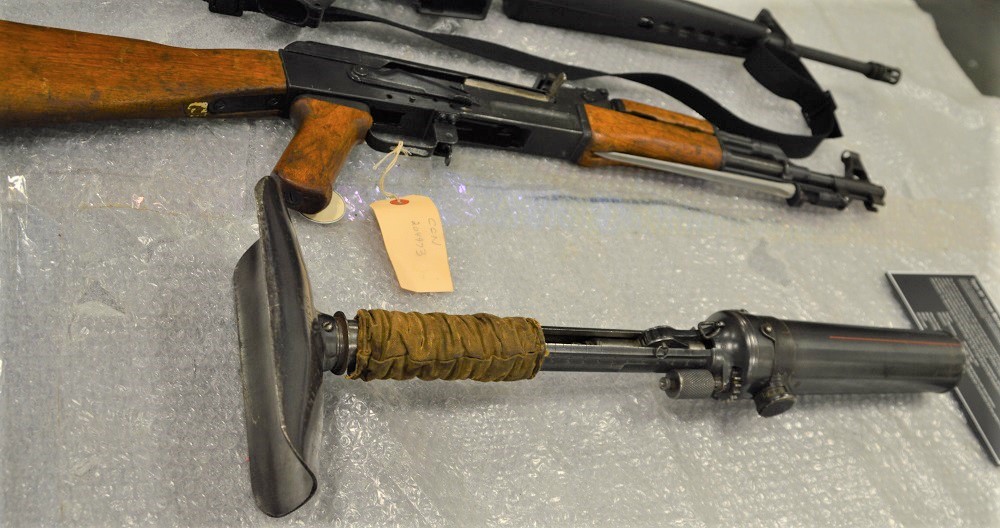 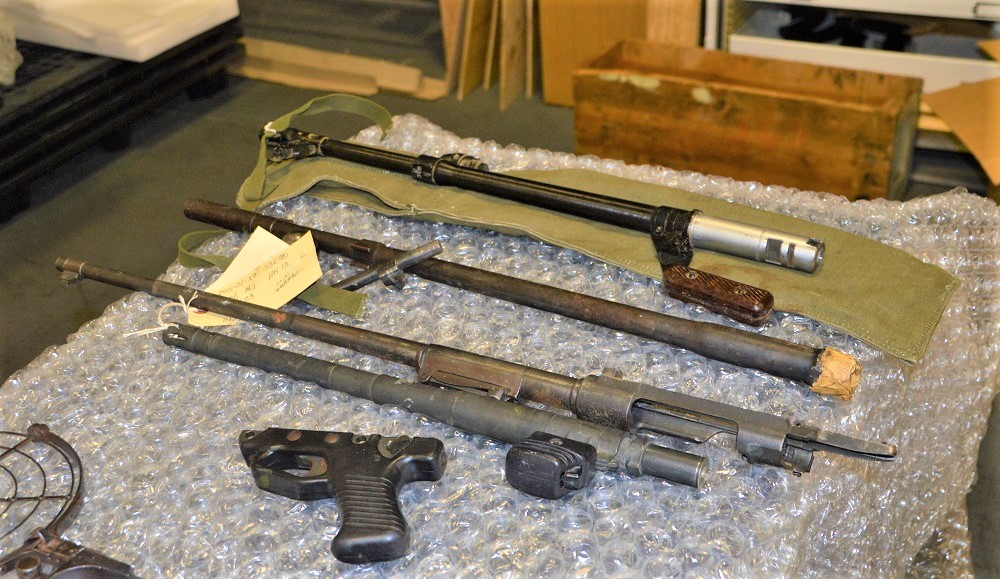 In climate controlled storage rests everything from hats (did you know the Army used to wear Prussian-style spiked helmets? — we’ve seen them), uniforms, vintage MREs (mmm, ham slice), Christmas packages from past wars, saddles, and sleeping bags. A whole row of recoilless rifles rests among Spanish-American War era Gatling guns; Pork Chop Hill meets San Juan Hill. While we were visiting, an SA-7 manpads trainer was being examined by the staff (please, no photos.)

Besides the small arms and gear at Building 201, the MSC also maintains a vast collection of macro artifacts in covered outdoor storage including a Nike surface to air missile, the fifth M1 Abrams prototype, jeeps, one of the only Sgt. York air defense vehicles in existence, captured Soviet armored vehicles still in tan desert schemes from when they were part of Saddam’s Republican Guard, artillery pieces, and other items.

Like the small arms, these items are in storage until they find their forever home. A 1942-made M3A1 Stuart light tank brought back from Haiti was stored at Anniston back in the 1990s before it was restored and placed on display at the museum of the 1st Armored Division in Europe. It is now at Fort Bliss. A Great War M1917 Renault light tank is now restored and in a static position in front of the Depot’s hospital, likely visited by Patton’s smiling ghost.

Preservation and catalog efforts at the MSC are full speed ahead, the staff now expanded to 15 — big numbers compared to past years. Old wooden crates, which often had not been opened in years or came from other bases where they were stored in forgotten Q-huts, are now being opened, inventoried and the items inside transferred to new climate-stable containers as part of the unit’s war on mold. You see, the old wooden crates are infamous for the green stuff, and we don’t mean olive drab.

This means more items are finding public display and more are finding an appropriate home. For example, Klug has 60 H&R Reising subguns in storage and, as the gun was more commonly used by the Marines in WWII, they are being held for that branch’s historical use.

If they have too many of something well past the need to preserve objects with historical significance, they get moved out to the public if possible through DRMO in the case of old gear (think Desert Storm mummy bags) or, with non-NFA regulated firearms and shooting accessories (slings, bayonets, bandoliers), transferred across town to the Civilian Marksmanship Program. Klug showed us several crates boxed up and awaiting red tape to clear to be trucked over to CMP — including some with 1,500 literally museum quality M1911 pistols.

But that’s another article.