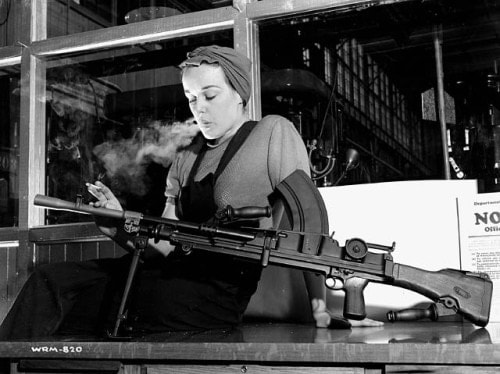 Used famously by the British and Commonwealth military for generations, the Bren light machine gun is a classic top-fed LMG with Czech origins. Based on the Brno-designed ZB vz. 26, the handy weapon was designed by Czech firearms engineer Václav Holek.

Modified and put into production in the UK in 1937, its name came as a combination of the “Br” from its original place of birth and “En” for Enfield, where the Brits made their own version in .303.

Fed from a 30-round detachable box mag, the Bren weighed between 20 and 25 pounds depending on the variant and could fire at about 500 rounds-per-minute as long as the bullets held up. There was also a 100-round drum.

Besides use by the British and their allies, Canadian manufacturer Inglis cranked out over 40,000 Brens for the KMT army of Chinese Generalissimo Chiang Kai-shek, which ensured the gun would continue to pop up in Asia for decades.

Gas operated with a tilting bolt, the Bren proved so popular in WWII that in the 1950s the British redesigned the gun to fire the same 7.62x51mm NATO round as their version of the FN FAL, the L1A1, and modified to use the same 20-round “inch pattern” magazine as the Belgian battle rifle. This kept the gun in regular service in the West as late as the 1990s.

And of course, a Bren gun provided a cameo in 1998’s Lock, Stock, and Two Smoking Barrels.