Most don’t know that bargain boomstick maker Harrington & Richardson made a submachine gun that saw service from Guadalcanal to Normandy– but it happened.

A design from gun inventor Eugene G. Reising — who cut his teeth working with John Browning on several firearms — his early 1940s SMG concept looked like a traditional carbine of its day. Featuring a one-piece wood stock to accommodate a short-barreled delayed blowback weapon, his closed-bolt burp gun attained a cyclic rate of over 500 rounds per minute.

Chambered in .45ACP, the stubby select-fire Reising took used low-capacity (for a sub gun) 12 or 20-round box magazines which limited its practicality. The cocking handle, rather strangely, was recessed under the fore end and required the user to tilt or even flip the gun to chamber a round. 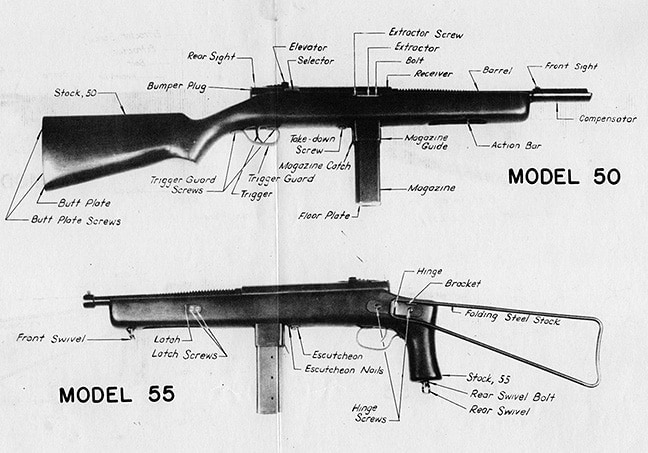 The select-fire version of the gun was produced in two variants, the M50 and M55, by Harrington & Richardson in Worcester, Massachusetts.

The overall length of the M50 version of the gun was 37-inches with an 11-inch finned and compensated barrel. Weight was kept down to 6.8 pounds, unloaded. 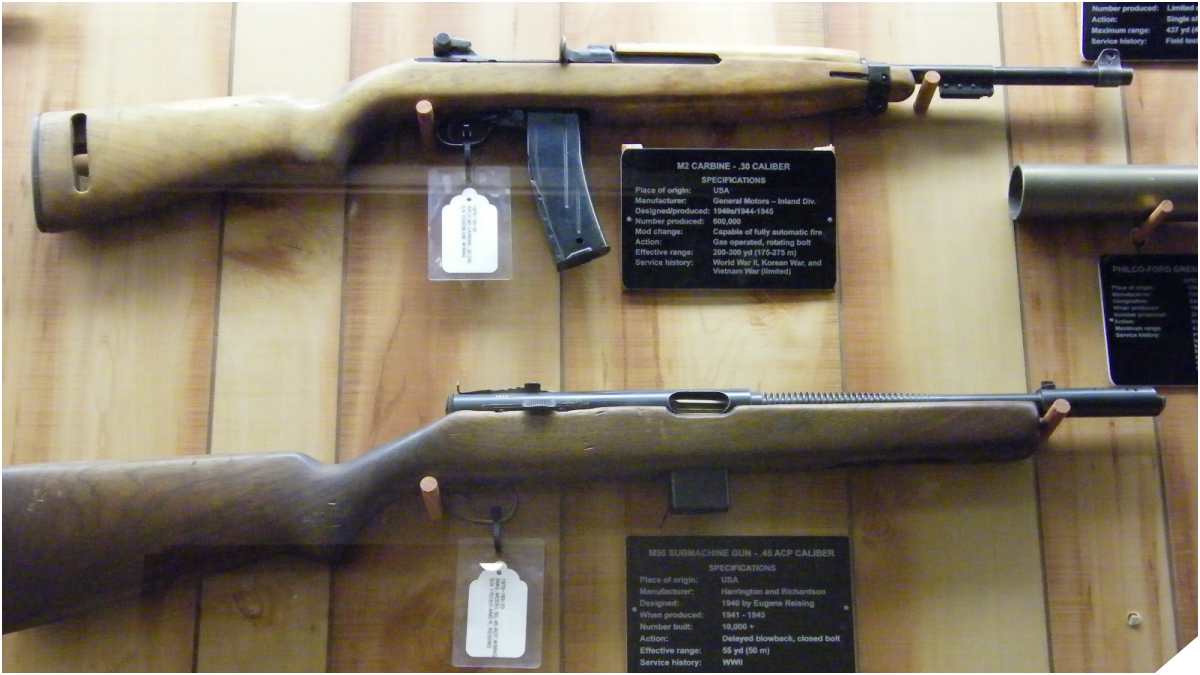 The M55 variant, which used wooden stock with a folding wire butt, was just 22.25-inches long with the stock folded.

When compared to its main domestic rival, the M1921/28 Thompson submachine gun, it was much cheaper and lighter. This made the H&R-produced Reising popular with government purchasing agents who snapped up early batches of the M50 and its slightly shorter folding-stock brother, the M55, just as the U.S. was becoming embroiled in WWII.

By 1942, Marines, headed to take Guadalcanal in the South Pacific back from the Japanese, were armed with a curious mix of Reisings, Springfield ’03 rifles (the Devils wouldn’t adopt the M1 Garand until later in the war), Browning BAR automatic rifles, and a few Johnson rifles. Not only the Marines but also the Navy on occasion used the humble Reising during the campaign, with one crewman on a landing craft reportedly utilizing a borrowed specimen to clear a Japanese soldier from a nearby tree “and he come tumbling down like a bird.” 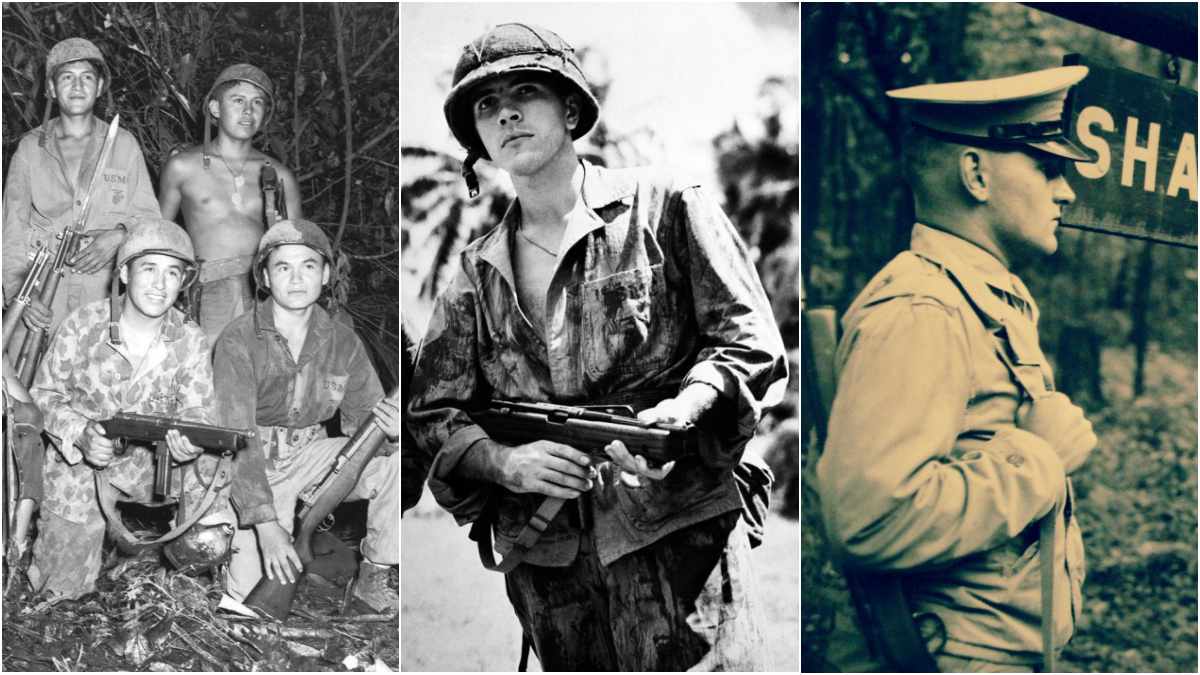 Reisings in USMC service during WWII: Marine Navajo Code Talkers with one of the SMGs front and center, Marine Sgt. Michael Strank with an M55 at the ready, and a Marine guard at FDR’s Shangri-La retreat– now Camp David– with a slung M50.

While an interesting concept in a stateside showroom, the Reising didn’t perform well under combat conditions. Marines who were essentially beta-testing the guns soon found themselves with Reisings that were so rusty and jammed that they would not function. By 1943, they were largely pulled from frontline service.

Nonetheless, M50s still soldiered on in the rest of the war, used by Coast Guard Beach Patrol Units and various State Guards back on the Home Front. 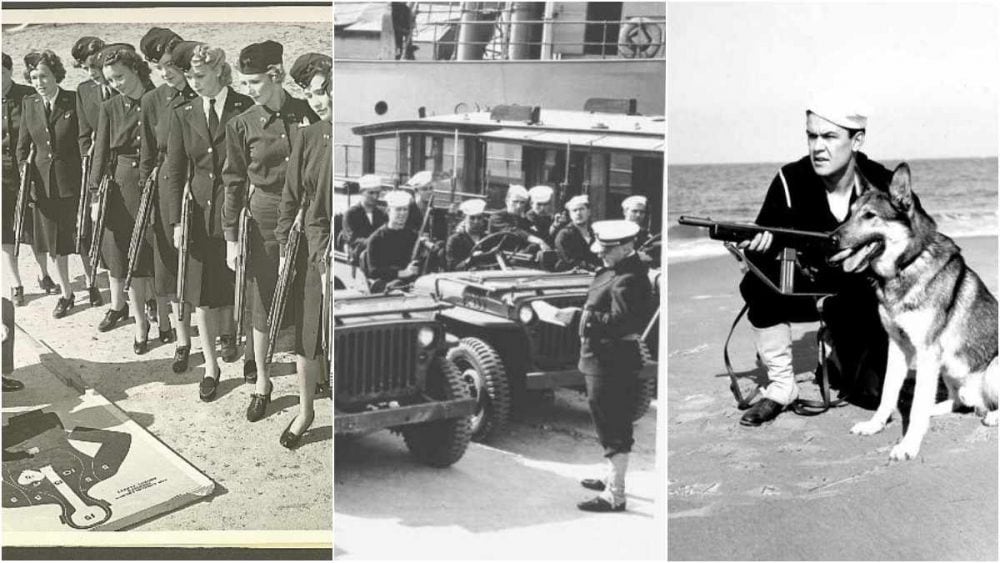 The Navy also continued to utilize the H&R SMG as well. 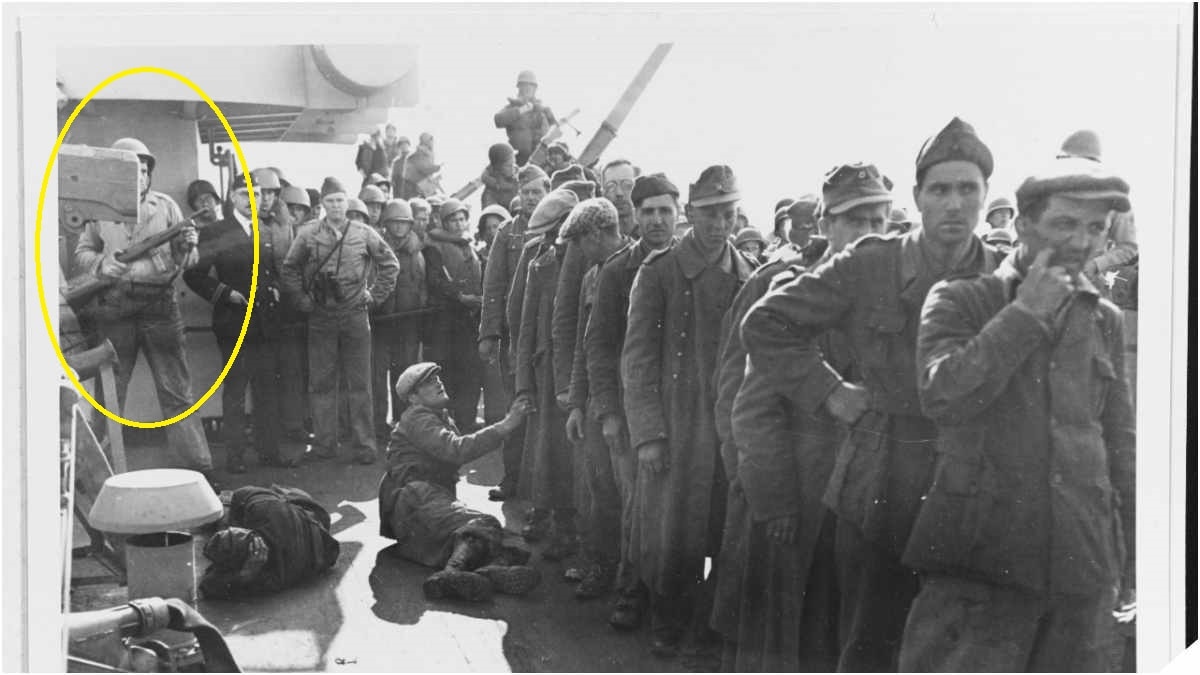 German and Italian prisoners of war on board the battleship USS Texas (BB-35) in June 1944 of the French coast of Normandy in the immediate aftermath of D-Day. Note the Reising in the hands of the sailor to the far left. (Photo: U.S. Navy)

In all, H&R made somewhere on the order of 120,000 M50 and M55 submachine guns then added to those numbers with a semi-auto carbine version, the M60. Today, due to the fact that most left in the states were liquidated from government storage long before the 1968 NFA amnesty and the gun continued to be offered for commercial and LE sales for years after, there are a good number of intact Reisings still floating around.

In fact, Rock Island has at least three transferable M50s up for grabs at their May Premier Auction, starting at about $4,500– which is a comparatively low price for a full-auto Class III gun.

Especially if you have a hankering for taking the beachhead.