A Henry Golden Boy never looked like this. Think majestic Bald Eagle meets old-fashioned ivory and silver with a twist of freedom in a rimfire-firing lever action platform. While the fancy looks and price point may not appeal to every shooter or collector, the American Eagle tribute edition rifle is one that truly must be seen and felt to be fully appreciated.

Henry Repeating Arms cranks out more specialized tribute edition rifles than any other manufacturer, but the American Eagle is different. The company explained the rifle portrays the national bird in a wood finish that closely resembles ivory.

The ivory-colored wood is then deeply engraved. On the buttstock, checkering flows into a leafy vine surround to highlight the head of an American bald eagle and the words “AMERICAN EAGLE” in script. Also, the rifle’s forearm has checkering and is engraved with “Henry” and scrollwork. Lastly, the wood has been finished with a protective finish for protection of the material and color.

Hands on with the American Eagle

The head-turning American Eagle is built on the company’s famed Golden Boy platform of rimfire rifles. This edition, chambered solely in .22 S, L, LR, holds 16 rounds of LR and 21 of Shorts. The 20-inch octagon barrel is blued steel, which mates to a nickel-plated receiver. Eye-catching nickel accents at the buttplate and forward barrel band round out the metalwork. 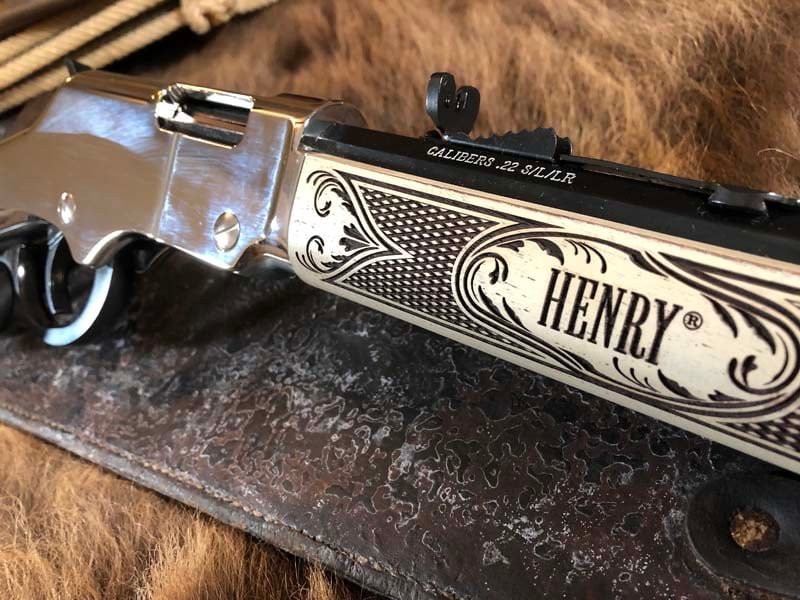 If the clean and mirror-like nickel plated receiver on the American Eagle is not enough, the company allows for easy customization with a user-installable receiver cover. (Photo: Kristin Alberts/Guns.com)

Those accustomed to the traditionally dark-stained American walnut on most every one of Henry’s other long guns will raise eyebrows at the look of the American Eagle’s stock. The company swears that’s American Walnut beneath the layers of ivory-toned primers, scuffed and factory-worn just enough to allow faint hints of the wood grain to show through. It’s the engraving in the stock that really defines the rifle, however.

The depth of the checkering and other carving on the woodwork is indeed much deeper than normal. In fact, those relief lines allow the natural color and hints of wood grain to show through. Like other rimfires, the American Eagle is made in Bayonne, New Jersey, while the centerfires generally come to life at the company’s Rice Lake, Wisconsin plant.

Though most folks will likely buy the gun solely as a collector piece, make no mistake that this tribute edition — like any other of Henry’s special pieces — is built to shoot. The fully adjustable semi-buckhorn rear sight with a white diamond insert aligns with the brass front bead. Unlike other Golden Boys, however, this one is not drilled and tapped for an optics mount. The quarter-cock safety means Henry has still thankfully resisted temptation to muddy the traditional lever gun looks with a secondary safety. The gun weighs in at 6.75 pounds with an overall length of 38.5-inches.

There are only so many things a shooter can say about pulling the trigger on Henry rimfires without repeating praises. If you ignore outward appearances and just work that smooth lever action and send some rimfire rounds downrange, you’d never know this was a special edition looker.

The trigger test American Eagle broke between 4.75 to 5 pounds on a Lyman digital pull gauge. The American Eagle is not drilled and tapped for scope mounting, which is just fine with us, as a scope could not do much justice to the piece in this case. Regardless, plinking with the adjustable irons is just as much a treat as any other of the company’s long guns. 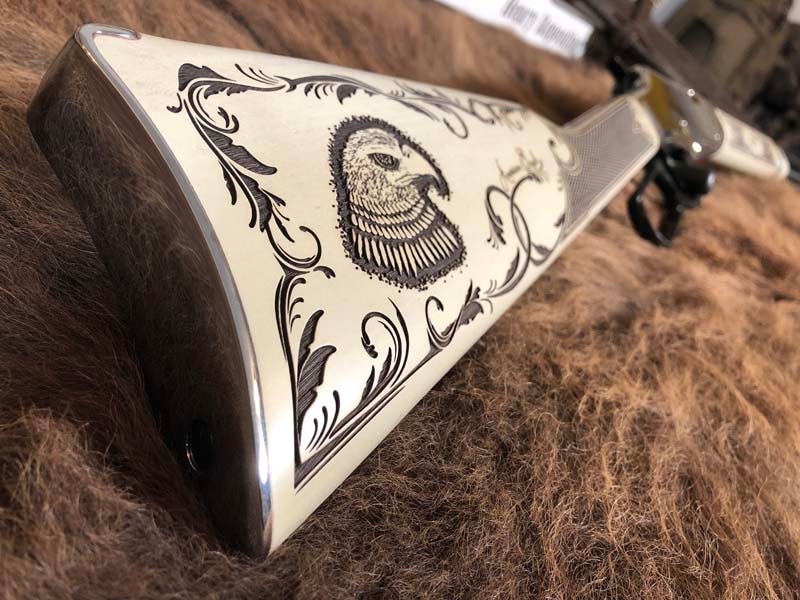 The ivory-colored wood is deeply engraved with the head of an American Bald Eagle, as well as the scrollwork “American Eagle” name and extensive checkering and floral vine-work. (Photo: Kristin Alberts/Guns.com)

This gun has been passed through many hands since it arrived at the gun shop. Lovers, droolers, and beggers mostly. After several hundred rounds and a couple mostly unnecessary cleanings, neither the nickel receiver cover nor the ivory-toned wood shows any more than normal fingerprints. The company states a “fixative” has been used as a sealant on the stock, and that leaves a satiny smooth feel, but better still, seems to be quite durable thus far.

We’re not really measuring accuracy with the American Eagle, but suffice it to say, I’d put it side-by-side with any of Henry’s tight grouping rimfires. We fired upon a steel plate from 25-75 yards offhand, and it was difficult to miss. Better still, the majority of the hits remained in a respectable pattern on the gong, even under rapid shooting. This tribute edition would more than adequately place bullets in the cranium of any small game out there at reasonable distances, though the vast majority of American Eagle buyers will likely never pull the trigger on these beauties.

Whether seeking an heirloom firearm for your own collection or one that can be passed through the generations, the American Eagle allows for an extra level of special. The rimfire is compatible with the company’s personalized receiver covers, meaning owners can customize their rifles with meaningful names, dates, and messages. Contact Henry’s custom shop for these user-installable receiver covers, which are available for several models of rifles. Besides, there’s always that 100 percent personal satisfaction guarantee from Henry Repeating Arms president Anthony Imperato. 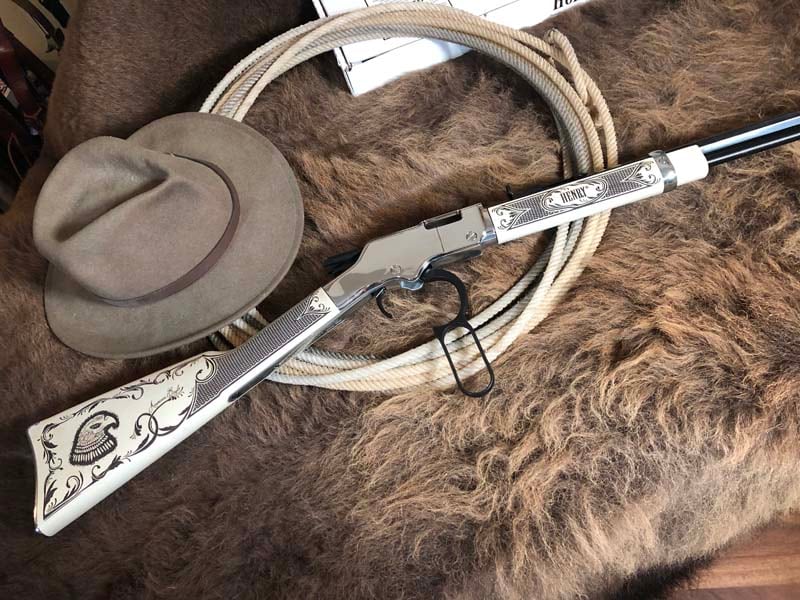 One this is certain, the American Eagle tribute edition turns heads with its unique looks. From the ivory colored stock to the engraving and nickel silver trim, this is no ordinary rifle. (Photo: Kristin Alberts/Guns.com)

An Above Average Heirloom

The new Henry American Eagle ventures outside the traditional lines of modern rimfires, and as such, will attract as many collectors as hunters and shooters. While the MSRP of $950 may set some aback, realize that this is not only a specialized tribute edition, but also one of the most attractive and interesting rifles not just from Henry Repeating Arms, but on the production rimfire market today.

Want to make a statement as a hunter?  Thinking of gifting a one-of-a-kind customized present? Or find yourself with a space in the safe for one of the most unique collector pieces to come from Henry Repeating Arms? The fierce and free American spirit of the bald eagle is alive and well in the American Eagle edition Henry rimfire rifle, a unique offering from one of the most patriotic family-run gun companies in our fine country.