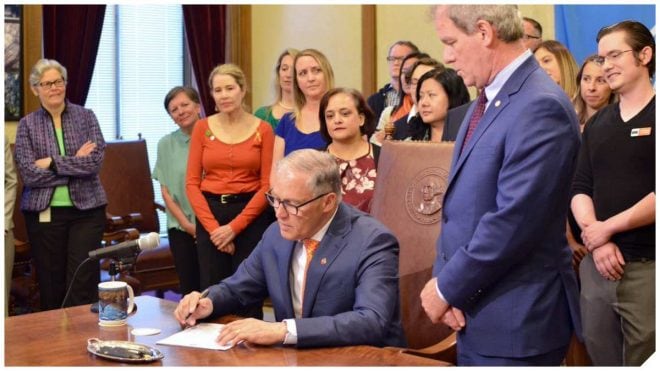 Washington Gov. Jay Inslee on Tuesday signed seven new gun control bills sent to his desk by the state’s Democrat-controlled state legislature. The measures include several to remove gun rights from those thought to be in danger, a ban on 3D-printed firearms and removal of the ability for those with a valid concealed pistol license to buy a gun without additional background checks at purchase.

“Our state is a leader on gun safety, but more work is needed to protect our students & the people of WA,” said Inslee, a Democrat, on social media after he approved the bills.

Supporters of the legislation included Washington Attorney General Bob Ferguson and an array of local and national gun control organizations. The groups, many of whom supported key candidates in 2017 to flip control of the formerly Republican-led state Senate, welcomed the passage of the bills.

“I am so proud of the progress we made this legislative session,” said Renee Hopkins, CEO of the Alliance for Gun Responsibility. “We put forward our most robust legislative agenda ever and got more priority bills passed this session than in all previous sessions combined thanks to our new gun responsibility majority.”

Groups standing in opposition to the measures included a wide range of Second Amendment advocates. They argued that the proposals would do little to take guns away from criminals and in many cases only affects otherwise law-abiding firearm owners.

“They’re just as happy expanding the list of people that can’t have guns,” said Joe Waldron, a spokesman for the Gun Owners Action League of Washington. “Piece by piece, they’re chopping away.”