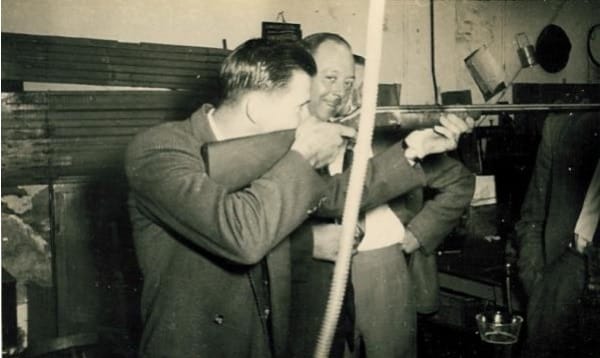 Raised in the small town of Kimba, South Australia, a 23-year-old Warne went on to found Sporting Arms Limited, best known as Sportco, in 1947. At the time, Sportco was the only private gun maker in Australia and over the next three decades produced dozens of rifle models, with Warne at the drawing board for their designs.

Besides their Martini-action guns, Warne’s bolt-action models proved popular not only Down Under but also on the global export market. Sportco made rifles for Winchester branded as that company’s Models 320 and 325.

After 1966 when Oregon-based Omark purchased Sportsco, Warne transitioned to America as an executive. While at Omark, the company continued making Sportco-style rifles and acquired ammo makers CCI and Speer, sight/optics maker Weaver, and reloading and accessory makers RCBS and Outers.

In 1979, as Omark got out of the rifle making business, Warne and his son Greg founded Kimber of Oregon, which continued in the designer’s footsteps of producing accurate rimfire and later centerfire rifles. The new company’s name was an ode to the elder Warne’s childhood home. Kimber’s first rifle, the John Warne-designed Model 82, started shipping in 1980. Earning a well-known reputation for accuracy, the U.S. Government purchased 20,000 M82A Target rifles in the late 1980s, originally for U.S. Army training. Other models from that era included the Predator, M84, and M89 centerfire rifles in several variants and grades.

After Kimber of Oregon folded in 1991– it was later reborn as Kimber Mfg., Inc under different ownership– Warne went on to found the Warne Manufacturing Company the same year with an eye to making high-quality scope mounts. He later sold that final company in 2001 but today Warne Scope Mounts still carries its founder’s name and mourns his passing.