When Ohio-based Hi-Point asked the internet to suggest a name for their new 9mm handgun, the Yeet Cannon fired and the Germans got in on the act. Hi-Point’s “Name the Nine” contest promised to give their fans a stake at naming their promised new handgun design. Initial name suggestions after a week of polling reportedly garnered 7,880 entries, with the most prolific, 556, being for Yeet Cannon or YC-9. 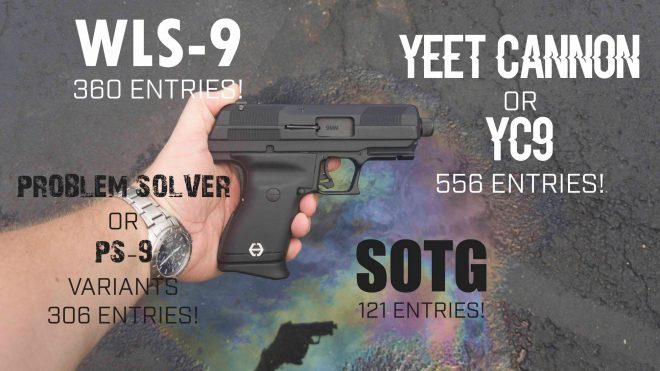 Yeet Cannon became the crowd favorite in HI-Point’s own version of the Boaty McBoatface phenomena. (Photos: Hi-Point via Facebook)

Yeet, a word that has crept into acceptance in the past few years, is generally employed as a multi-use exclamation. However, four days after announcing Yeet Cannon was topping polls, Hi-Point on Tuesday announced a final list of 10 proposed alpha-numeric names, none of which included the past crowd favorite. This sparked a backlash on the company’s social media page, with some 1,600 largely negative comments, many questioning the absence of Yeet. 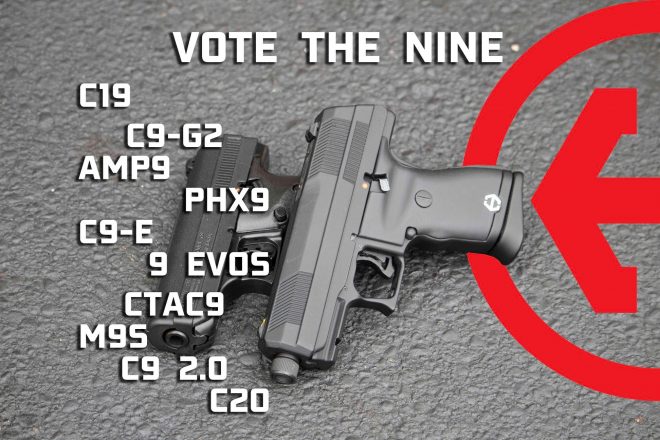 Hi-Point’s current list of accepted names in what has evolved into the Vote the Nine contest. (Photos: Hi-Point via Facebook)

“We want the name we all voted for. We want the Yeet Cannon,” noted one commenter, whose call to action was, in turn, liked nearly 400 times. Then, in a turn for the surreal, Heckler & Koch‘s Social Media Girl, noted for an often epic “war on the poors” via social channels, responded to Hi-Point’s Facebook post with a promise of collaboration, of sorts.

Please take some advice from someone who doesn’t listen to their customers, you really really should. Swallow your pride, get out your crayons, and write a letter to your legions of almost new customers and call it the YC-9. We promise to do a collaborative photoshoot with you. We will bring a MK23 specially marked YC-45. This is not a joke. The powers of 2 Yeet Cannons, the original and the little brother, would be unstoppable. 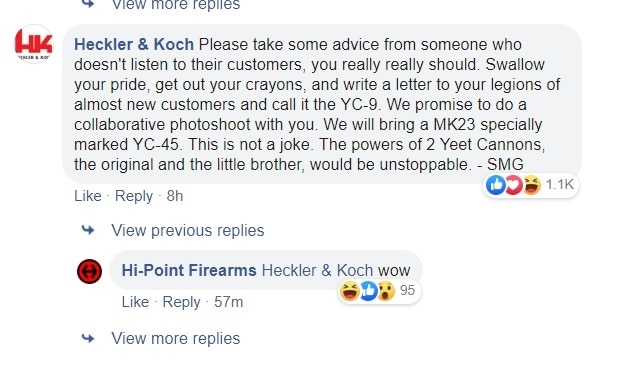 To show they were serious, HK’s social media page is listing a link to YeetKanone.com, which redirects to the company’s own MK23. Hi-Point replied to HK’s feedback only with, “Wow.”

By Wednesday afternoon, Hi-Point waved the red flag and disclosed the contest had been extended to a third phase, saying they would pit the winner of the suggested names against YC9 for a 20-day polling period starting on June 25. “We hear you loud and clear,” said the post. “We have always been a company for the free people…and because it has been pitchforks and torches you have forced us to announce some things sooner than later.”

To this, HK responded to Hi-Point, “We did this together everyone! Offer stands for the YC-45 photoshoot. Let’s be friends.”

Either way, the internet is fully in love with the Yeet Cannon.

This article has been updated from the original to include additional developments to the contest announced Wednesday afternoon.