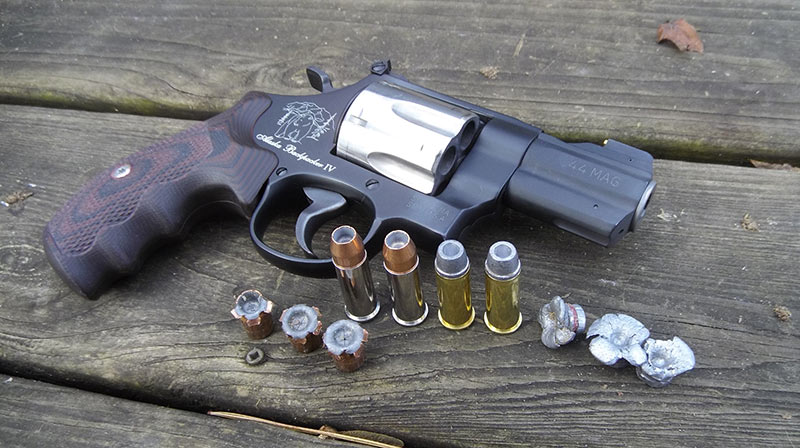 The .44 Special is amid a comeback thanks to the popularity of big-bore carry guns and advances in bullet technology. Unlike many other cartridges of similar intent, the 44 Special has earned a very interesting place in the pantheon of American cartridges.

The parent case to the .44 Magnum, the .44 SPL was a favorite cartridge of nearly all sportsmen and outdoorsmen in the years before the introduction of its more powerful descendent. Today’s .44 SPL offers a great deal to both the novice and experienced shooter with both modern and classic bullet types.

We pit the old versus the new in the form of the Buffalo Bore 190-grain Soft Cast and Sig Sauer’s 200-grain V-Crown JHP.

The gun used for testing is the now-discontinued Smith & Wesson Alaska Backpacker IV chambered in .44 Magnum. Fun fact: any gun chambered for .44 Magnum can also fire .44 SPL. The 44 SPL is only slightly shorter than the Magnum, so it can fit in the same chamber just like a .38 SPL can fit in the chamber of a .357 Magnum. This allows owners to stretch the utility of their revolver in a way that a modern semi-auto cannot.

The S&W wheelgun is made of lightweight alloy and has a stainless-steel cylinder. It features a 2.5-inch barrel and adjustable sights. Our particular gun for testing boasted VZ grips – though other variants are available in many colors and textures. 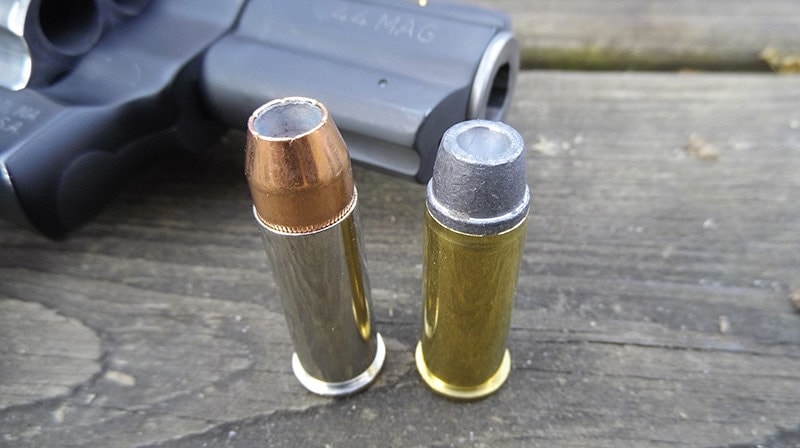 The accuracy of these two loads was tested at a distance of 15-yards from a bean bag bench rest. Five, five-shot groups were recorded at that distance. The Sig load averaged 2.75-inches at that distance with no significant deviation. The Buffalo Bore load came in at 3.5-inches with the smallest group registering 3-inches and the largest at 4.25-inches.

There are plenty of cast lead loads that are very accurate, but it all depends on the gun and what that particular gun prefers. I do not fault Buffalo Bore in this category, as it is difficult to get the same type of accuracy with plain lead as you do jacketed bullets. Overall, though, Sig wins in this category.

Velocity was tested at 5-feet from the muzzle over an Oehler 35P chronograph. A total of 10 rounds of each type were fired for average. The Sig 200-grain load came in at exactly 800 feet-per-second with velocity consistent across loads.

The 190-grain Buffalo Bore averaged a surprising 1,059 feet per second, which puts it in the upper end for velocity given the barrel length.

Considering that there was only a 10-grain difference in bullet weight, the Buffalo Bore load knocked it out of the park. We would have liked a little more speed from the V-Crown, as there is certainly enough case capacity to justify greater velocity. The BB load was about 30-percent faster given the same barrel length.

When it comes to recoil, there is a difficult call to be made. Because the Buffalo Bore load is made of relatively soft lead, it doesn’t quite bite into the barrel the same way that a jacketed bullet does in terms of friction and thus recoil. Even though the bullet weighs just about the same, it can move 30-percent faster without a huge difference in terms of felt recoil. This puts the Sig load in a bit of a bad spot because it is a very sweet cartridge to fire. 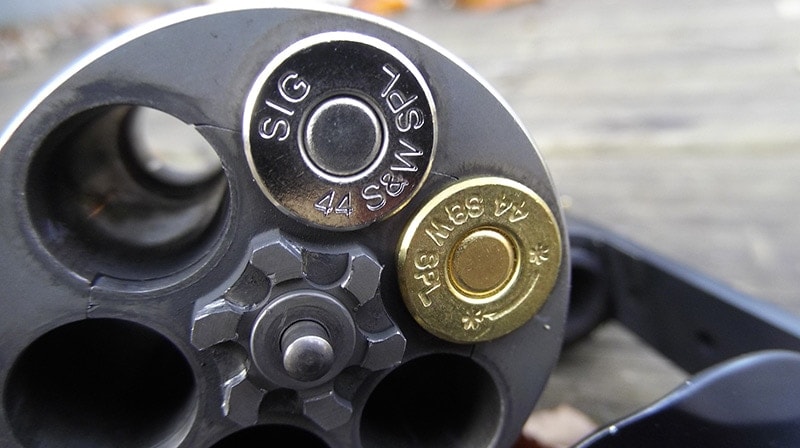 Each load was tested in the wheelgun. (Photo: Josh Wayner/Guns.com)

The recoil of the V-Crown is soft and easy. It is well-engineered for a modern carry gun and it certainly means business. It feels very similar to a nice .45 ACP in that it is more of a shove than a hard snap. If you are dead set on carrying a .44 SPL, the 200-grain V-Crown is a great choice.

While it is a great cartridge, the extra power generated by the BB load for a marginal increase in felt recoil is what sets it just a peg higher for this test.

Shooting a revolver in a world of semi-automatic pistols is an acquired taste that requires a certain level of skill. The gun used in this testing was fairly light for a .44 SPL of any sort and the trigger pull, while excellent for a packing revolver, did not lend itself to easy double-action shooting. Follow-up shots were difficult with both loads at any distance beyond 15-yards. Firing single-action resulted in better accuracy, however, it was still not a walk in the park.

Firing the .44 SPL in rapid succession is not a truly painful experience, but it certainly becomes tedious with a double-action pull. Overall, there was no real discernible difference in general handling between the two rounds featured here. Both were excellent for their caliber.

The gel performance test was conducted using bare blocks from Clear Ballistics. The performance of the bullets was judged in terms of penetration and expansion. To simulate a general self-defense encounter, the gel was shot at a distance of 3-yards.

The BB load offered a 100-percent expansion rate, but the bullets were quite soft and all of them broke apart in the gel to some degree. The average penetration depth for three bullets was 14.5-inches with some of the pieces spreading along the wound path. 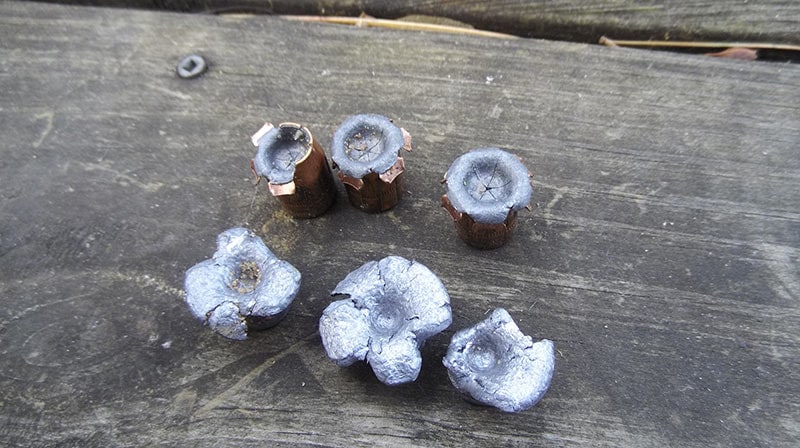 The Sig load behaved much more like a traditional jacket hollowpoint and expanded just after impact. Average penetration for three shots was also approximately 14-inches. Expansion in all recovered bullets was nearly 100-percent. There were a couple of odd phalanges that didn’t open all the way, but all of them by definition had expanded.

The main problem with the .44 SPL is that it is not necessarily designed for barrels as short as 2.5-inches. This is a short gun meant for short-range self-defense, typically in a wooded area. Both of these loads were essentially made for guns that would be carried on the street. While there is a widening range of options for .44 SPL, these two are both excellent choices in terms of ballistic performance. 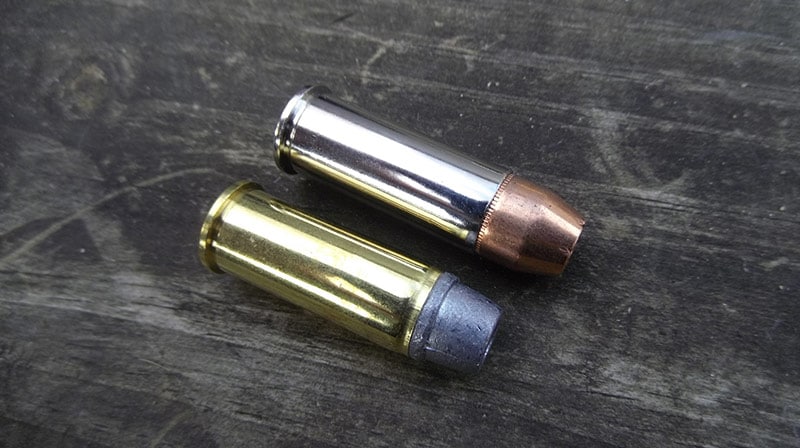 This was a tough one to call. We thought both of these were exceptional options and each had advantages. The main deciding factor came down to bullet speed. Sig ammunition offered equal penetration for less recoil, but it was categorically quite slow.

That said, bullet speed angle made this a difficult decision. Sig really needs this bullet to be around 1,000 feet-per-second, which would put it in a category of its own in terms of marketability. Most .44 Magnum shooters don’t do it with any joy. It would be a fair assessment to say that the majority of .44 Magnum owners only fire a box or two of it a year, with many opting for .44 SPL for practice. Juicing up the speed would not dramatically increase recoil but would likely make it a choice carry cartridge even for people that are intent on carrying .44 Magnums.

All things considered, Sig’s ammo was a bit easier to shoot, was more accurate and offered good gel performance making it our winner in this head-to-head.