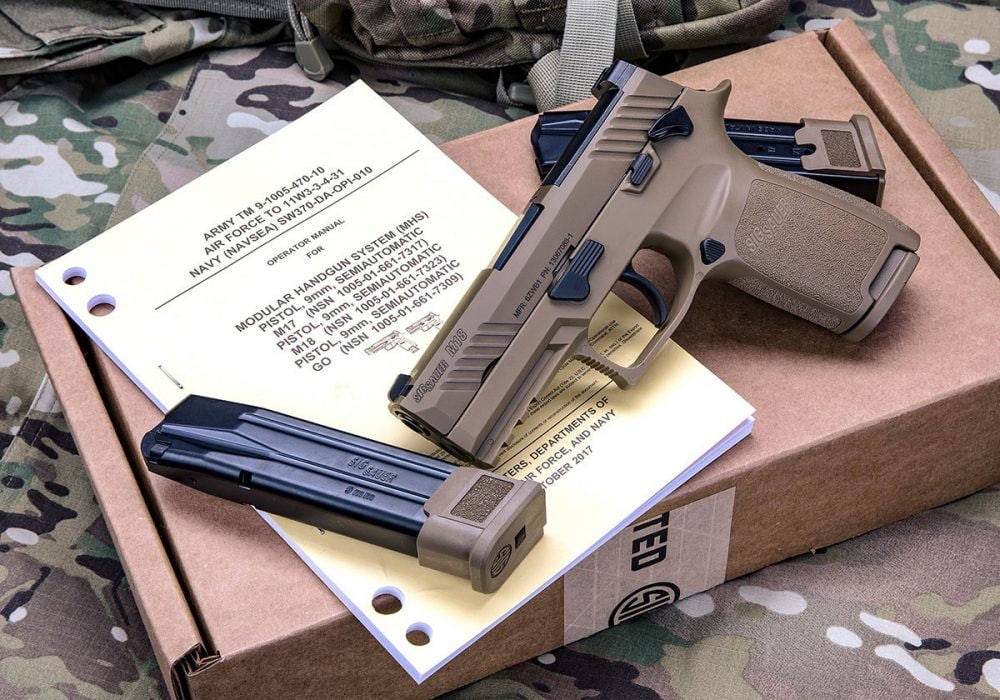 A variant of the Sig Sauer P320 with a number of upgrades to include a coyote-tan PVD coated stainless steel slide and a removable top plate for optics, the M18 can use a 17-round 9mm flush fit or 21-round extended magazine. (Photo: Sig Sauer)

The 9mm handgun — the smaller counterpart to the M17 adopted under the Army’s Modular Handgun System contract — replaces the Beretta M9 series pistols, which have been in service since 1986.

“The Air Force bought the M9s back in the 1980s, and the design has not really changed since then,” said Merrill Adkison, USAF Small Arms Program Office senior logistics manager. “M9s are larger, heavier, all-metal pistols; whereas M18s are lighter polymer pistols with a more consistent trigger pull and adjustable grips for large and small hands.”

The M18 will also replace smaller numbers of the M11, which is a version of the all-metal Sig Sauer P228, used by the Air Force Office of Special Investigations. Finally, the new pistol’s ability to use blank firing kits and Simunitions will allow it to replace the long-serving .38-caliber Smith & Wesson M15 K-frame revolver, which is used in training military working dogs.

Choice of the Marines as Well

While the Army intends to field the full-sized M17s primarily, with M18s reserved for use by individuals and units requiring a concealed weapon, such as overseas training teams and advisors, investigators, special operations personnel, and general officers, the Marines are exclusively choosing the smaller handgun.

As noted in the Navy’s FY 2019 procurement budget justification for the Marine Corps, 35,000 of the smaller Sigs will not only replace M9s but also the Colt M45A1 CQB .45 ACP railgun and the newly-acquired M007 Glock.

Sig Sauer recently announced the M18 sailed through Lot Acceptance Test conducted by the Army. While LAT tests allow for 12 stoppages in the course of 5,000 rounds fired, three M18 used went to 12,000 rounds each, with no stoppages. The guns then went on to pass required interchangeability, material, and accuracy tests.

Late last year, Sig Sauer announced they are releasing a commercially-available version of the military’s M18 on the consumer market.