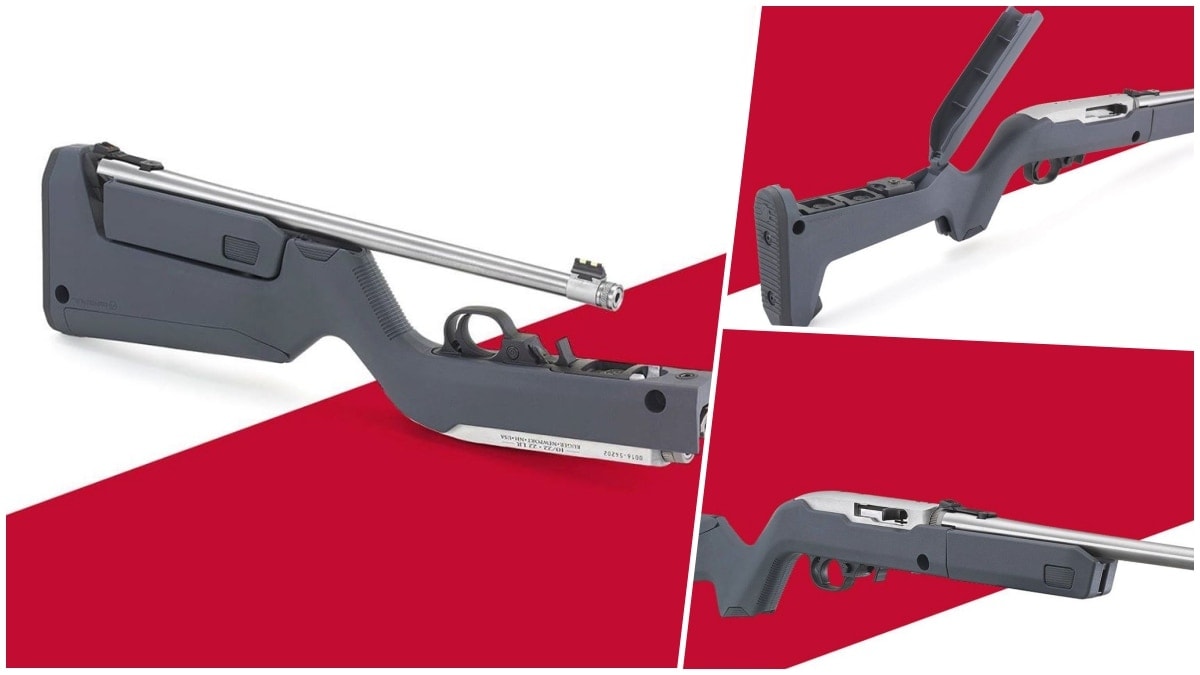 Ruger’s 10/22 has been around for 50 years, but the factory option that includes a Takedown variant with an installed Magpul Backpacker stock is new. (Photos: Ruger)

Ruger has further tweaked their 10/22 Takedown carbine with a new stainless model that ships standard with a factory-installed Magpul X-22 Backpacker stock.

With Magpul’s Backpacker X-22 stock, in what the accessory maker terms “Stealth Gray,” the compact carbine weighs just 4.2-pounds. The overall length, when assembled, is 35-inches.

The takedown is simple, as it just requires the locking the bolt back on an unloaded rifle, pushing the takedown lever, twisting the subassemblies, and pulling them apart. The barrel locks into the rear of the XT-22 stock. Reassembly is done in reverse and retains zero.

The Backpacker stock has an ergonomic handguard, optional QD sling mounts, and storage compartments in the grip and stock with the latter designed to hold three standard 10-shot 10/22 mags.

Other features include a barrel that is threaded in a 1x28TPI pitch for standard muzzle devices and suppressors, a Magpul MOE SL nonslip rubber buttpad, and an included scope base adapter for both Weaver- and tip-off scope mounts.

MSRP on the Ruger 10/22 Takedown/Magpul X-22 Backpacker model is $529, a figure that should be lower at retail. Keep in mind that the standard 10/22 Takedown without a threaded barrel has a retail of $439 and the Backpacker itself a cost of $109 (when it can be found) and you can see where the price fits.

Magpul’s propaganda on the Backpacker:

And a look at the 10/22 Takedown when the base model was introduced in 2012, a concept that had been floating around as an aftermarket custom build for a long time before Ruger made it standard.