In yet another contribution from America’s firearms industry to the Ukrainian fight against the recent Russian invasion, Florida-based Adams Arms – maker of piston-driven AR-platform firearms – announced they have a batch of new rifles ready for Ukrainian hands. Despite current logistical difficulties under the Kremlin-planned attack, the company says its guns will make it to the fight.

“Adams Arms has supported Ukraine and other international customers for years,” said Adams Arms President Jason East. “We have been assembling their latest orders for the last few months. From the onset of the Russian invasion, we have been working around the clock to ensure our shipment of firearms will arrive unmolested and in its entirety. We stand with the people of Ukraine and are proud to know Adams Arms products are going to be used to support the independence of a sovereign nation.” 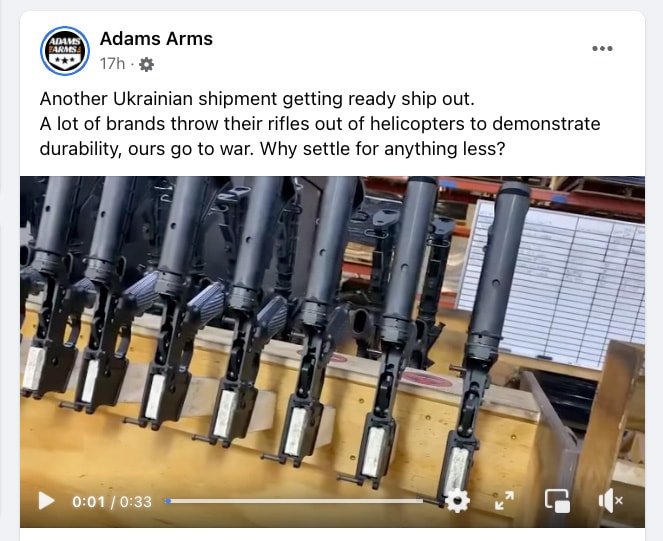 The statement joins a host of others within the firearms community and beyond, with a wave of U.S.-based manufacturers and other businesses finding ways to support Ukraine. Vista Outdoor, owner of such brands as CCI, Federal, Remington, and Speer, joined the fray this week as well with a pledge to donate 1 million rounds of ammunition to the Ukraine Armed Forces. The move followed similar actions by others in the firearms industry, to include owner of NASCAR and board member of Ammo, Inc., Richard Childress, who pledged last week to add another 1 million rounds of donated ammo to the cause.

The inspiration for the move, according to Childress, was a direct call out from Ukrainian President Volodymyr Zelenskyy. “I was listening the other day to President Zelenskyy say we didn't want out, he wanted ammunition,” Childress told the media. In a related development nearly two years in the making, the Ukrainian military had already started embracing ARs and other NATO-caliber firearms back in 2020, making the need for more ammo like 5.56 NATO a likely pressing concern even as the world watches civilians take up older AK-pattern rifles to defend Ukraine. This puts American ammo manufacturers like Vista in an advantageous position to fill that gap with a round already dominant in the U.S. market.

Adams Arms has also added a fundraising effort to their campaign, offering T-shirts adorned with the emblem of the now-famous Ukrainian Border Guard unit stationed at Zmiinyi “Snake” Island that purportedly broadcasted, “Russian warship, go **** yourself,” when commanded to surrender early in the invasion. It’s a colorful touch, and all proceeds are set to go to the Ukrainian National Bank’s war fund.

Finding creative ways to support Ukraine through arms and funding is hardly limited to the firearms industry, with even local breweries in some states offering artistic, expletive-laden beverages that take aim at Putin’s warmongering. Still, arms and ammunition manufacturers, not to mention the nations that host them, are uniquely positioned to offer real-world assistance to the beleaguered Ukrainian nation. As such, recent days have seen offerings of thousands of Belgian FNs and tons of other arms and ammunition for Ukraine, with promises of more to come. Even legendarily neutral Switzerland has found it impossible to fence sit entirely and joined other nations in sanctioning Russia.

As for Adams Arms, what remains unclear is exactly how their firearms are making it into the embattled nation under the constant threat of Russian intervention. As previously reported by Guns.com, only a few avenues remain to bring arms into the country under the current situation. Seagoing transports are being warned away from ports, and commercial air services are all but halted.

That leaves the possibility of using routes through Ukraine’s western neighbors – Poland, Romania, Hungary, and Slovakia – or some other clandestine avenue. With the promises of hordes more weapons from the West, it’s possible Adams Arms contribution could hop an international ride with some foreign-made firepower as well.