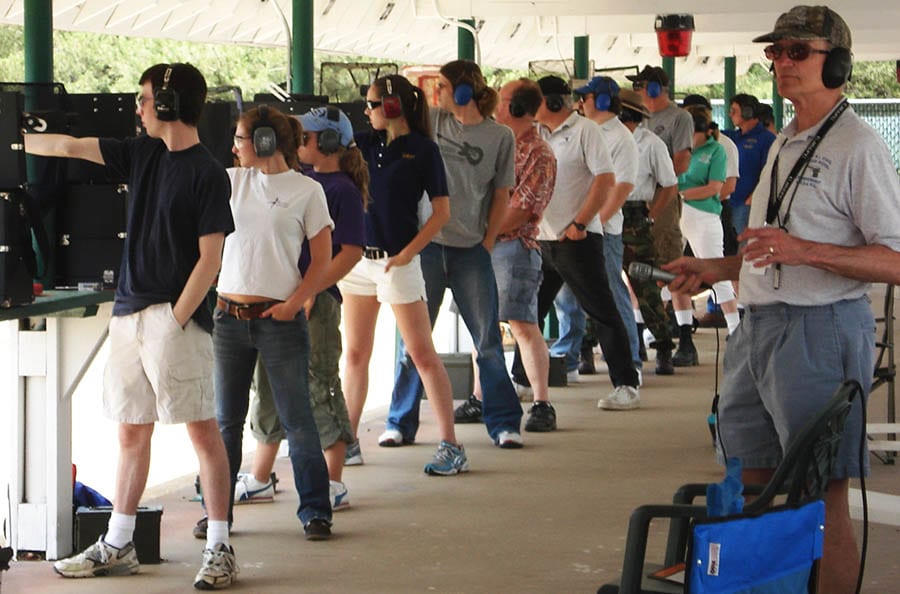 A group of shooters on the line during a bullseye match in New Jersey (Photo: NjPistol.com)

Many shooters get their feet wet in competitive shooting by competing in club-level bullseye shooting matches. Most of these are NRA Bullseye matches and require a shooter use a .22 LR pistol or revolver capable of holding at least five rounds either with or absent an unmagnified optical sight. With a three-part course of fire consisting of a slow fire, timed fire and rapid fire string, speed comes second to precision. The one area that snags up many new shooters is what equipment to run.

For optic sights anything that will hold zero and features a dot smaller than two minutes of angle will work fine, but what about the lead delivery system? The .22 LR pistols run the gamut in terms of price and performance but the two aren’t always linked. In other words, the most expensive pistol isn’t always the best. With this great conundrum in mind, Guns.com presents the top six target pistols for bullseye shooting. 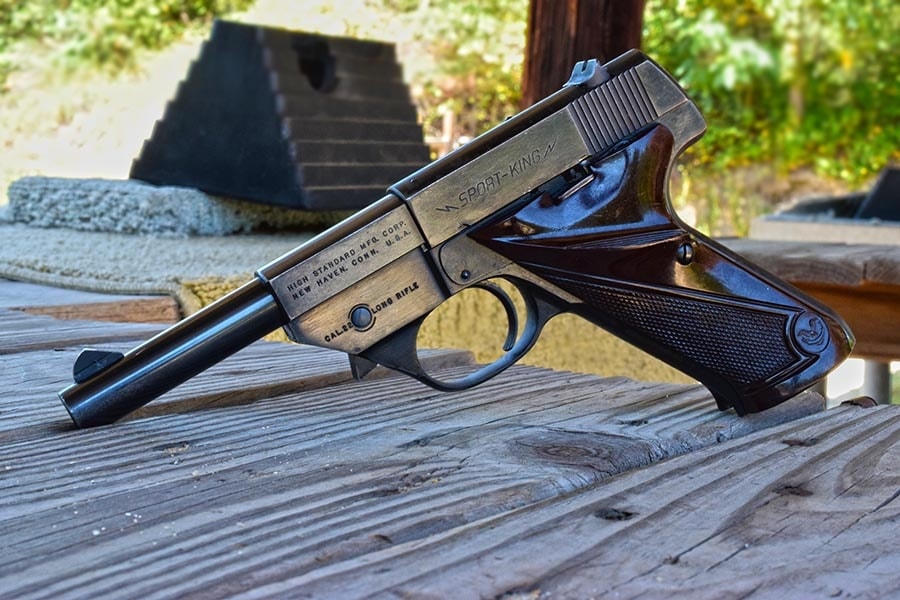 The High Standard Sport King may be dated, but it still outperforms pistols double its price. (Photo: Jim Grant)

When Carl Gustav Swebilius purchased the Hartford Arms and Equipment Company in 1932 and began making .22-caliber pistols, few people would have imagined that they would go on to build both world class target pistols, and the preferred assassination handgun of the OSS in World War II. History nuts like Guns.com’s own Francis Borek and myself, revel in the old-world quality of the High Standard Sport King pistol.

Featuring a quick-change, fixed-barrel design and crisp single action trigger, the Sport King was light years ahead of its time. Each gun was milled from a single block of steel and just oozes quality. Thankfully, used models can be purchase for a song, especially if they have a rough-looking exterior. 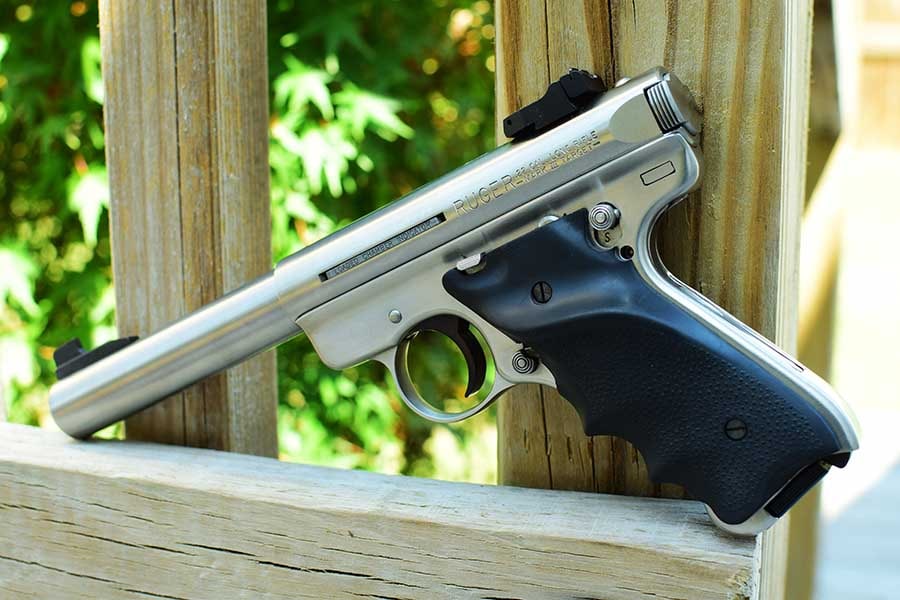 The author’s MkIII with custom grips has punch tons of paper and slayed many a squirrel. (Photo: Jim Grant)

Ruger’s get a bad rap for being one of the least expensive options for new bullseye shooters, but they offer a tremendous amount of value and flexibility. Unlike older bullseye pistols, the Mark III’s receiver is already tapped for a scope mount that is included with the handgun. Additionally, since the pistol is so ubiquitous there are hundreds of available accessories for it.

The platform’s shortcomings are its somewhat limited accuracy when compared to higher-end target pistols, and its difficult disassembly procedure for the uninitiated. The MKIII has higher tolerances than every other pistol on this list and tends to function with all but the worst ammunition. 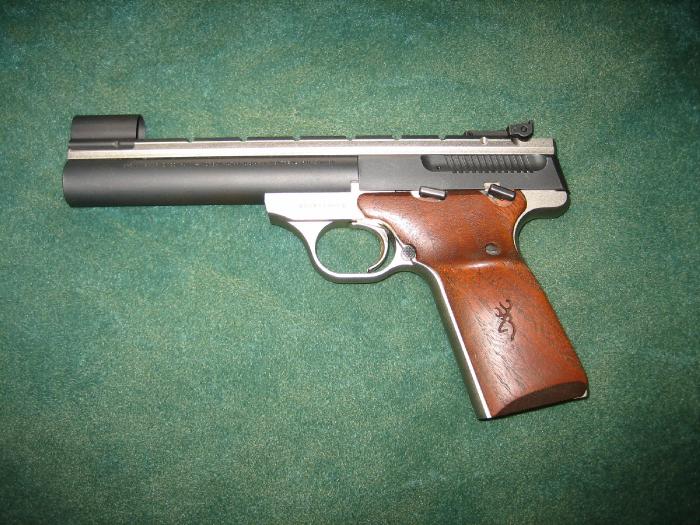 The Buck Mark is a classic .22LR pistol with an old-world price (Photo: GunAuction.com)

The Buck Mark is a fairly inexpensive way to get into bullseye shooting without holding most shooters back. It may not be as accurate as the purpose-built models from Hammerli or Walther, but it holds tight enough groups that any 10-ring misses are purely shooter error.

Like every model on this list, the Buck Mark features a fixed barrel, but unlike the rest has a build-in scope rail. The newest models from Browning, dubbed URX feature an ultra-soft finger-grooved grip, which is good for camping guns, but not necessarily for target ones. The Buck Mark has been around for awhile, so finding accessories should be easy enough and the magazines are inexpensive. 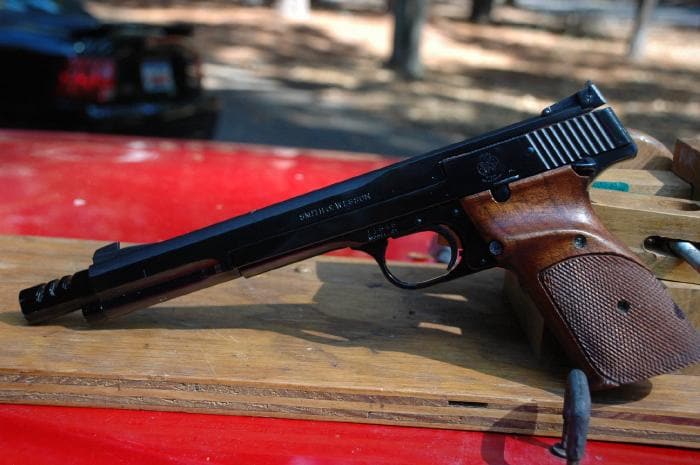 An early model Smith and Wesson 41 still looks as sharp as ever with performance to match. (Photo: GunAuction.com)

Designed with the same 105 degree grip as the venerable 1911, the Smith & Wesson Model 41 was built for the 1911 lover wanting to try their hand at bullseye shooting. In fact the stock trigger of a Model 41 feels like it belongs on a match-grade rifle or 1911. Just like a 1911 the Model 41 comes with a steep price tag, and rightfully so — it’s a purpose-built target pistol with ultra-tight fitting internals.

The Model 41 is more accurate than its main competitor, the Ruger MkIII, but at more than double its MSRP hasn’t proved as popular. Older models are just as accurate as modern ones and often times have a better, hand-fitted trigger. So be sure to check pawn shops for 41’s that might have a scuffed exterior to save big bucks on this tack-driver. 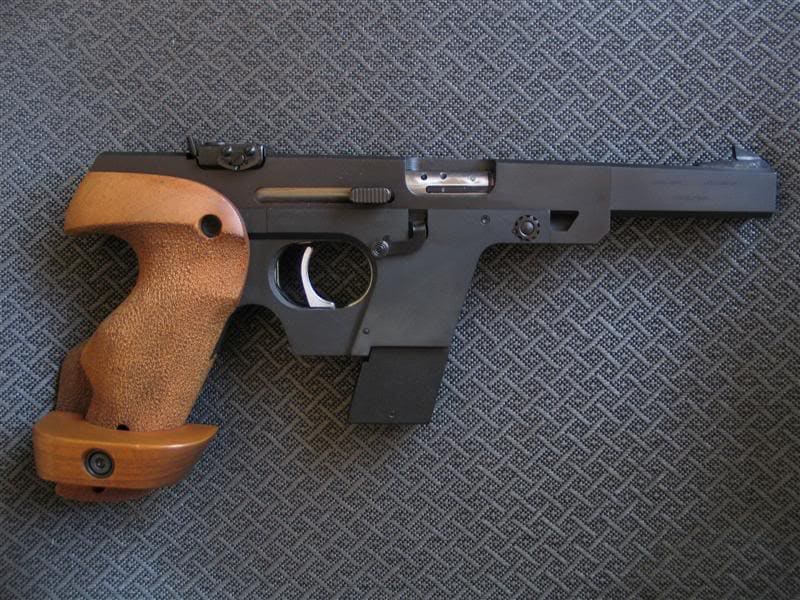 Walther’s GSP looks like it was dropped by a time traveller. (Photo: GunAuction.com)

The Walther GSP looks like Han Solo went to JJ Abrams to redesign his blaster pistol, and forgot to remind JJ to not make it look like cake-froster. But don’t let the GSP’s uber-futuristic design fool you, this odd-shaped Walther is a precision-built tack-driver.

Featuring a magazine well forward of the pistol grip, the GSP is balanced to reduce shooter fatigue during slow-fire shooting strings. Several variations of the GSP exist with grips that suits both left and right-handed shooters with all hand sizes.

The biggest downside of the Walther is finding one, a quick glance at Walther’s website reveals that the gun isn’t listed for sale, so finding a distributor in the U.S. can be tricky. Used models are generally just as nice as newer ones but parts will be equally tough to find and likely not cheap. 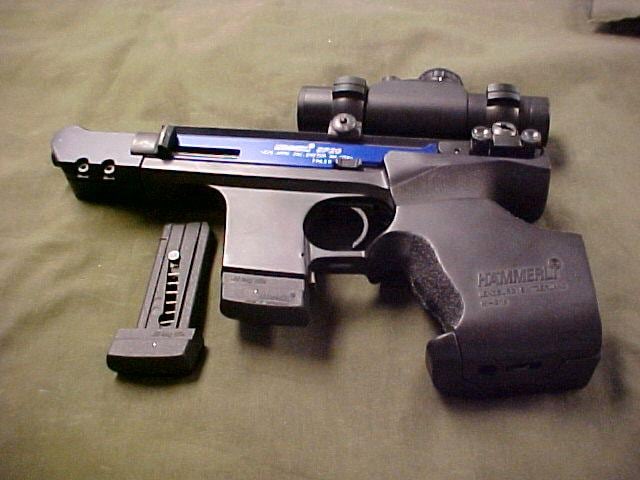 The SP20 RRS has everything you could ever want from a target pistol, except good looks. (Photo: GunAuction.com)

The Hammerli SP20 is a weaponized extension of the human hand. The gun points as quickly as your index finger, and recoils so lightly it feels like it might just be vibrating. Like the Walther GSP, the SP20 RRS features a forward magazine design for better balance, and the grips are roughly fitted to the user’s hand before fine tuning is performed.

The Hammerli is a world-class pistol for world-class competitors and carries a world-class price. If you’ve never shot a bullseye match before, the Hammerli will make you look like a serious competitor until you pull the trigger. Because unlike every pistol on this list, this gun gives the shooter zero excuses to not punch the X out of the target.

If you don’t own a target pistol yet, purchase something else first, unless you’re a multi-millionaire that hates money, because learning on the Hammerli is not different than learning on a Ruger, except it costs more. If you ask yourself, “can I possibly improve myself as a shooter in any way?”, and the response is “no.” That is the time you’re ready for a Hammerli.

Shooters getting into bullseye shooting are sometimes intimidated by all the expensive, “Space guns” they see, but remember, performance is more than just equipment.

Physical fitness, stamina and dedicated practice play just as much of a role in victory as a high-end target pistol. If you don’t believe me, look at online scoreboards sometime.

Many shooters, including myself, have placed very well with stock Ruger Mk IIIs and Buck Marks often times beating opponents with vastly superior equipment. Though it never hurts to have the best.