Six things your AR15 needs to become a DMR 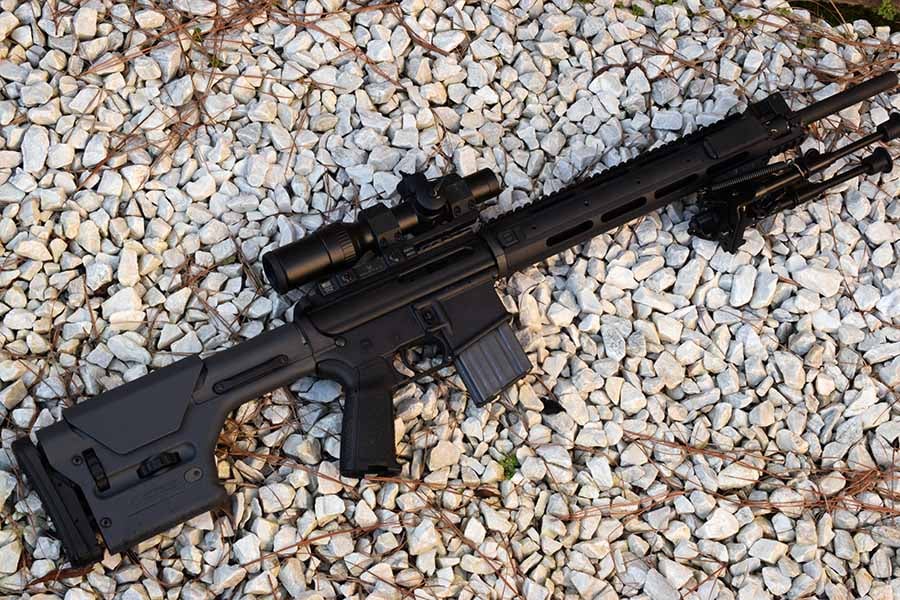 While at a recent 3-gun event, some shooters mentioned an upcoming Designated Marksman Rifle match being held only an hour from my house. Having very limited experience with this type of match, I decided to go in head-first and try my hand at long-range, rapid-fire riflery. There was just one issue: I didn’t have a precision rifle that would work for the match. At least I didn’t think I did, until I considered the most versatile rifle ever made: the AR-15.

Many of you are probably shaking your heads right now. Yes, DMR rifles are meant to reach out past the range of infantry weapons and are normally chambered in a more powerful round to facilitate this. That’s true. However, since I’m shooting at steel and paper, stopping power is irrelevant.

The only advantage a bigger round has is wind resistance. Thankfully there are heavier grain varieties of .223 ammunition that help combat wind drift.

Ideally, the ammo should be as heavy as your barrel can stabilize. The heavy round’s extra weight helps better resist wind drift. When pushing your AR-15 out to the furthest reaches of its effective range, 75 and 77 grain ammunition is ideal. Hornady and Remington make loaded rounds in these weights, but both are upwards of a dollar per cartridge, so you may want to consider handloading.

Another way to reduce the cost of these pricey projectiles is to use less expensive rounds of similar weight when zeroing your rifle. No it won’t give you a perfect zero. However, once you’ve gotten rounds on paper, switch to the expensive stuff before dialing in the final zero. 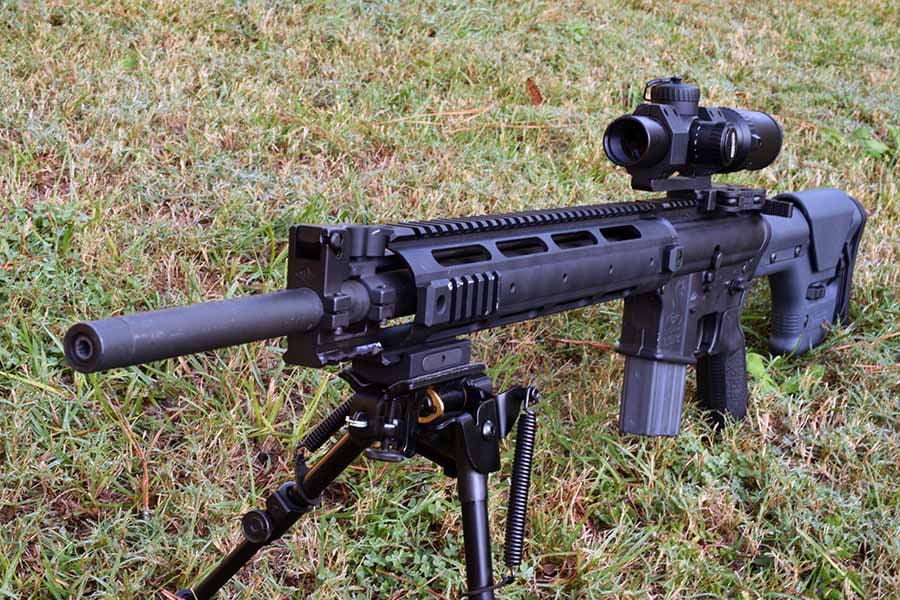 A heavy AR15 barrel is a blessing and a curse; more consistent barrel harmonics at the cost of weight. Not a big deal when shooting from a stationary position. (Photo: Jim Grant)

Although the original M16A1 profile, pencil barrel maybe my favorite general use barrel profile, it’s terrible for high volume or long range use because it heats up so quickly.

An AR15 with a 10-inch barrel doesn’t produce sufficient projectile velocity for longer ranges. On the other hand, the difference between a 20 inch and a 24 inch barrel is roughly only 100 feet per second. Shooters need to understand the courses of fire they’ll be facing to chose an ideal length.

But if you have to move and shoot, 20 inches is an ideal medium between full-length and carbine length barrels that still has enough velocity to make shots out to 500 yards without tremendous drop, but you should have a cheat sheet with you to remove the guess work. 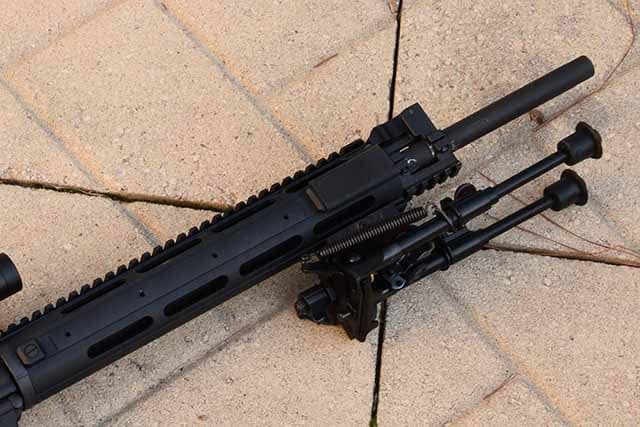 A free-floated handguard allows shooters to attach various accessories, like a bipod, without changing the weapon’s point of impact. (Photo: Jim Grant)

The most important aspect of precision shooting is consistency.  If you hold a rifle completely wrong, pulling the trigger with your pinky finger, you can still make hits, so long as you do so exactly the same every time.

To reduce the inconsistent barrel harmonics, it’s important to ensure the same forces act upon the barrel every time the trigger is pulled. The easiest way to do this is to make sure as little as possible is actually touching it by free-floating the barrel. For AR15 rifles, this can be done with hand tools and little technical knowledge. Simply buy a replacement handguard that only connects to the receiver, remove the delta clips that secured the old handguard and install the new handguard.

If you have a standard gas block with fixed front sight, I have some bad news: You’re going to have to remove the gas block. On a new gun this is not easy and requires a punch, vice block and brass hammer. If you have a low-profile gas block you can likely accomplish this with nothing but an allen wrench. 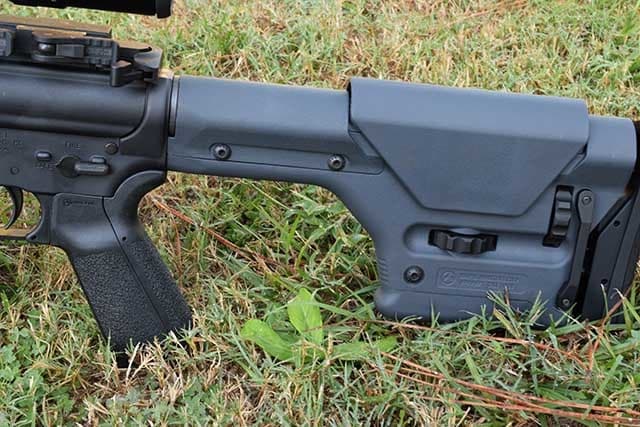 Finding your natural point of aim is much easier when the rifle actually fits. (Photo: Jim Grant)

Depending on your arm length, scope height and eye relief the normal A2 rifle stock found on most full-sized AR-15 rifles won’t be conducive to making accurate shots. Partially because if it doesn’t fit you correctly, you’ll likely be shooting differently every time. Also, if you choose a scope large enough to require a riser mount, it will be too high to see while maintaining an effective cheek weld. You’ll end up doing something akin to the AK chin weld technique, which is far from ideal. M4 style stocks are okay and allow shooters to adjust the length of pull, but not comb height.

For optimal adjustability, something like the Magpul Precision-Adjustable Stock is ideal. The PRS stock has two dials that adjust length of pull and comb. Also, the PRS features a railed lower section for monopods, should you be so inclined. Having the best rifle in the world won’t help you make accurate shots if it doesn’t fit you. 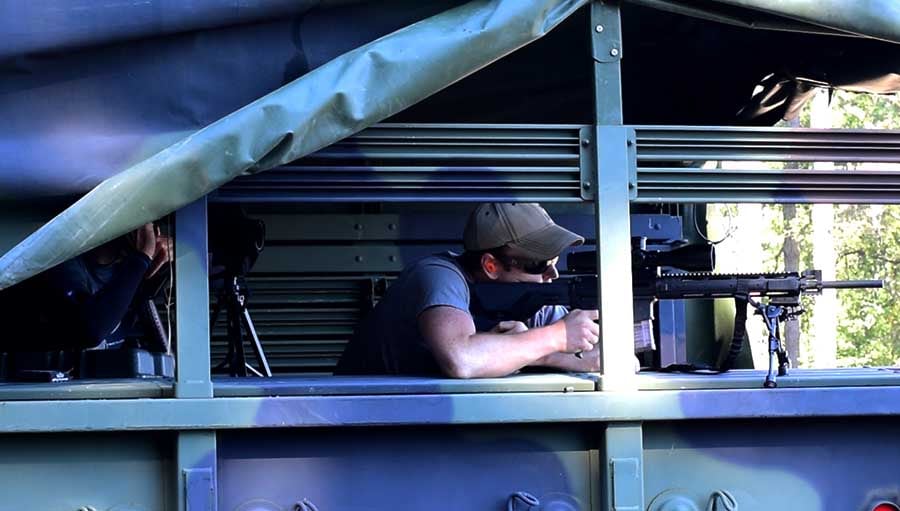 When it comes to shooting at any distance, you can’t hit what you can’t see. Shooters looking to engage targets out to 600 yards will need a scope with magnification of at least eight power. More can be better, but having too much magnification makes target acquisition very difficult.

A variable scope helps ease this burden by allowing shooters to find their targets at a lower magnification, and then engage them with more precision at higher ones. But you want to make sure the scope has some sort of subtensions (the size of the area of a target hidden by the thickness of a scope reticle) for distance estimation and drop calculation. These may be echelons on a Trijicon scope or mil-radeons on a military optic, but you’ll need something to tell you where to aim when the target isn’t point blank.

Whichever a shooter chooses, they should make sure they know the system inside and out. Kentucky windage sounds cool and romantic, but is effectively useless to all but the most experienced shooters. 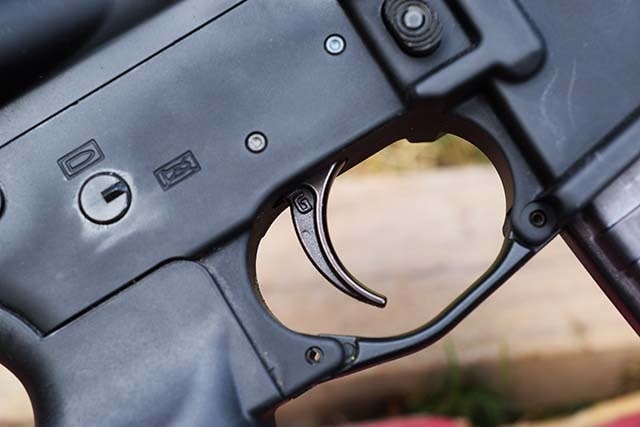 A standard ar15 trigger isn’t terrible, but a 2-stage match trigger like this Geissele makes all the difference in the world. (Photo: Jim Grant)

When building a precision AR-15 shooters should buy a nice, adjustable trigger with a pull weight under 4 pounds. This might seem dangerous or frightening to some, but the rifle is a precision instrument and if the trigger pull weight is so great that shooters often pull the rifle off target, none of the other features will matter at all.

For precision work a two-stage trigger is most desirable to give you a smooth take up and crisp break. Single stage may be faster, but you aren’t building a race gun, you’re building a target rifle.

When building a precision rifle the most under-appreciated part of the equation is the shooter. A novice could buy $15,000 worth of equipment, but if they don’t know what they’re doing they might never achieve groups smaller than 8 inches at 100 yards.

The best way to learn is to find other shooters who compete or enjoy long range shooting for enjoyment, then watch and ask questions. Most are more than happy to lend helpful advice.

Equally important is practice. Knowing how to ski and being an experienced skier are two very different things. The same applies to shooting. So go out there, grab a ballistic chart for your setup, and sling some lead down range. You’ll have a great time and learn the true limits of your rifle in the process.