Smith & Wesson's Model 57 brings the .41 Mag back from the grave

Much to the delight of hunters, collectors and handgun enthusiasts, this includes the underappreciated Model 57 in .41 Magnum. Though the 57 Classic was first reintroduced in 2009 in several variants, it has now been fine- tuned to this single offering.

With the introduction of the Classic line of revolvers, Smith & Wesson is resurrecting the legacy of historical wheelguns.  With all the advantages of modern metallurgy and a nostalgic appearance, these guns harken back to the early collectible guns that made the Smith & Wesson name famous while still being ready for heavy use. 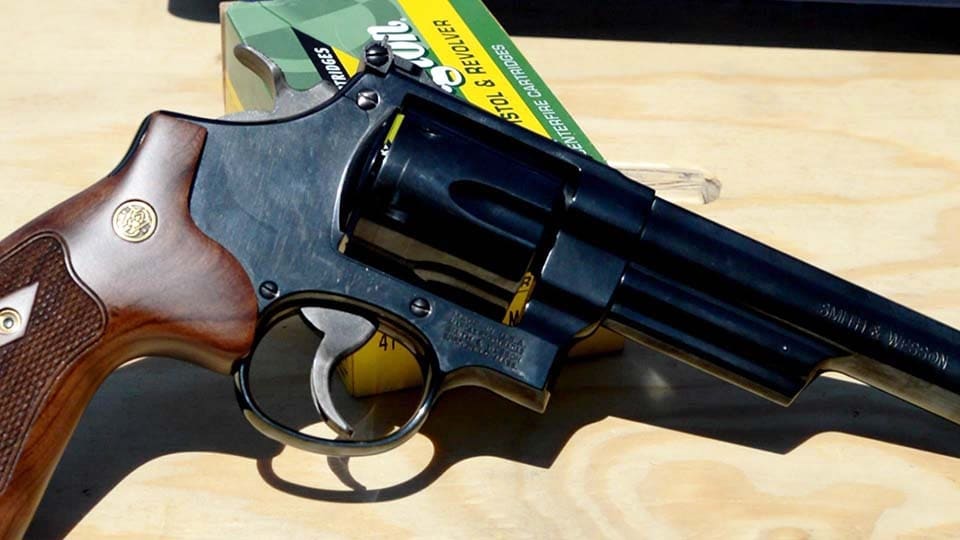 The Classic 57’s finish might not be quite on par with the original, but it’s darn close. (Photo by Kristin Alberts)

The Classic Model 57 springs from Smith & Wesson’s original Model 57, introduced in 1964 which was available in three, six and eight and three eighths-inch barrels with either highly polished blue or nickel finish.  Smith & Wesson also offered a more basic, fixed sight Model 58, a four-inch barreled .41 Mag, geared toward police carry. Later, in 1986, the Model 657, a stainless variant of the 58, hit the market and is still highly sought after today.

The Model 57, comes with a brightly blued finish,  six-inch barrel and holds six rounds of .41 Remington Magnum. This single/double action six-gun wears a pinned red ramp front sight, and adjustable white-outline notch rear-sight. The checkered walnut square butt grips are classy, with the inlaid Smith & Wesson logo. While the MSRP of $1009 is closer to what collectors pay for high-quality vintage guns in presentation cases, the new Classics can usually be had for less money on the open market, like most of Smith & Wesson’s line. 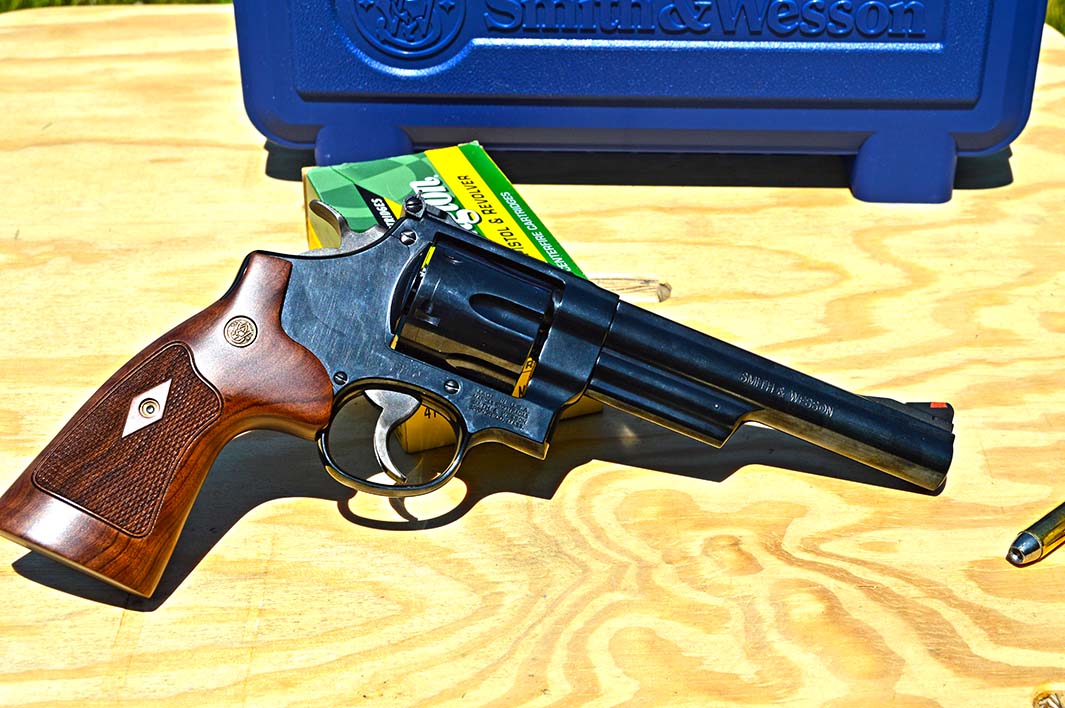 The .41 Magnum round is devastatingly powerful (Photo by Kristin Alberts)

The .41 Remington Magnum is plain potent medicine.  Introduced by Remington in 1964, the .41 Magnum round has ties to both Elmer Keith and Bill Jordan.  They designed the .41 Magnum to split the difference between the .357 Mag and the recoil-heavy .44 Magnum. They believed the .41’s balance between power and controllability would make it the ideal police cartridge.  With marketing issues and confusion clouding the way, the venerable .41 never got its full due in the police realm, though it quietly caught fire among hunters and shooters.

The Model 57 makes an ideal hunting revolver; its cartridge offers enough ballistic performance for ethical deer harvesting and the rear sight is easily replaced with an optics mount for a handgun scope, like the Leupold I keep on my stainless Model 657.  While it’s certainly not as easy to find ammo for the .41 Mag as it is for the more common .44 Mag, those boxes are still on the shelf.  For handloaders, reloading the .41 Magnum is a breeze, though it has been a toss up lately whether bullets and powder are easier to find than factory ammo.  Generally speaking, bullet selection comes down to 170-220 grain lead and jacketed offerings.  One of my favorite hunting loads is a 210 grain JHP at around 1300 fps.  I’m completely confident in my skills out to 65 yards on whitetails, though I’m sure the gun can easily handle twice that.  I’d also be sufficiently satisfied with some of the 180-grain hollow points for self defense. Though the size and weight of the Model 57 preclude it from my carry rotation, as a bedside gun I’m confident anything that breaks in my home either on two or four legs, won’t take more than a single dose of the 57’s potent medicine.

The .41 Mag can achieve stopping power nearly comparable to the .44 Mag with comfortable recoil and flatter trajectory, though I also consider the .44 Specials to be a pleasing range round.  Sadly, when Clint Eastwood went all Dirty Harry, the world fell madly in love with the .44 and it rang the death bell for the .41 Magnum. Relegating it to the world of niche fans and handgun hunters. Though that shouldn’t deter hand-loaders from adopting the round, it’s still a very potent choice, just not a tremendously common one. 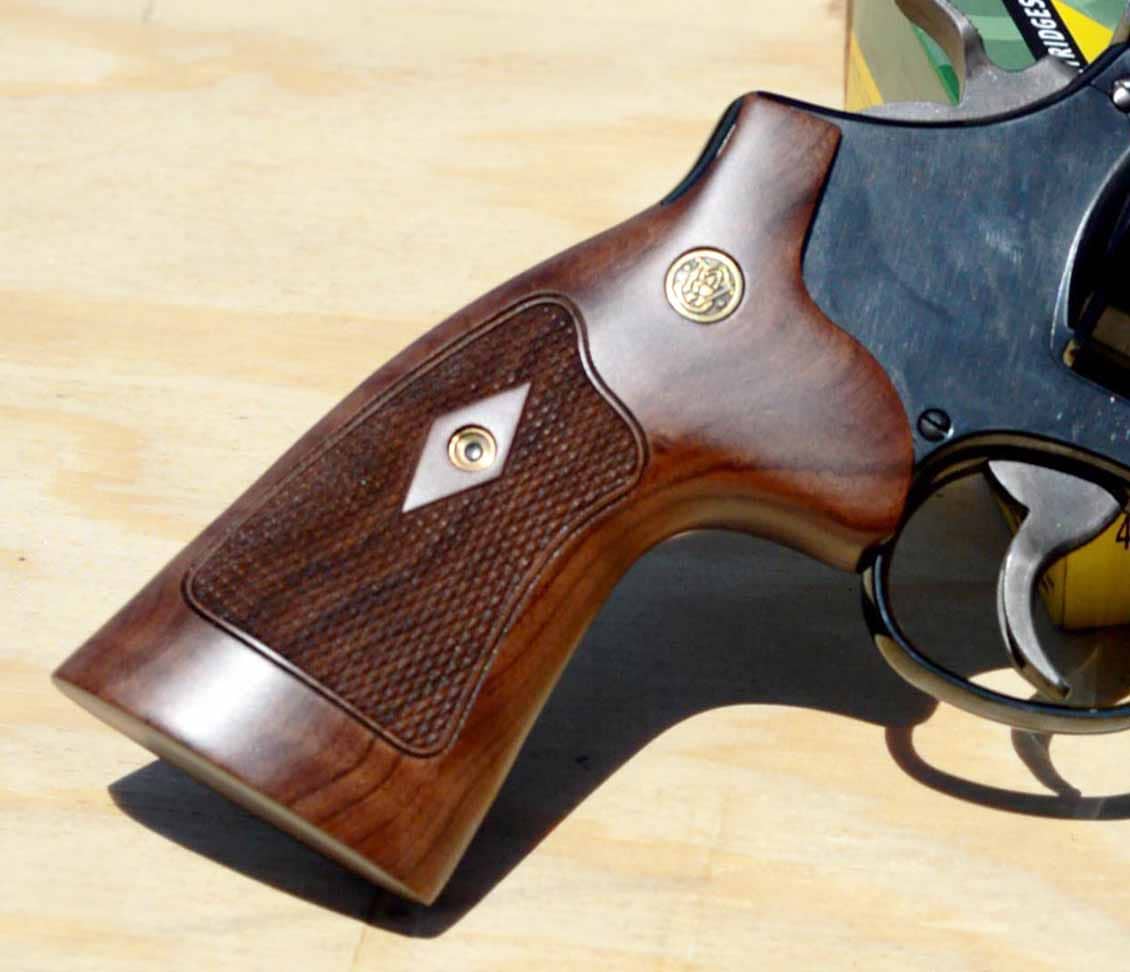 With boxes of factory ammo from Remington, Winchester and my own reloads using Hornady bullets, I set about knocking out paper targets, cowboy style.  Shooting this six-shooter feels right, like the first time you fired an M1 Garand or a 1911.  The gun itself, is a joining point of past and present in one joyous hand cannon. The weight and balance of the carbon steel frame feels like a natural extension of your arm and really cuts the felt recoil of the potent .41 Magnum. The grips are meaty enough to fill the hand and tame recoil without being so large, like the older models, to not fit smaller shooters.

Like all the new guns coming out of Smith & Wesson, the Model 57 Classic is much closer to custom piece than a mass-produced gun.  The single action trigger is sweet and crisp, breaking around four pounds and the double action pull is smooth and solid, though awfully heavy.  In fact, I struggled to stay on target when pulling double action; however, there just are not many circumstances when I would cycle this revolver in double action.

Whether old or new, these N-Frames look good in a quality leather rig, and feel just as good coming out and acquiring the target.  Recoil can be stiff, but is quite manageable.  I shot 210 grain soft points, 170 grain JHP and even some heavier cast lead.  Hornady’s .41 magnum hand loads were a favorite for recoil reduction, while the Winchester 175 grain Silvertips provided superior accuracy from the bench. 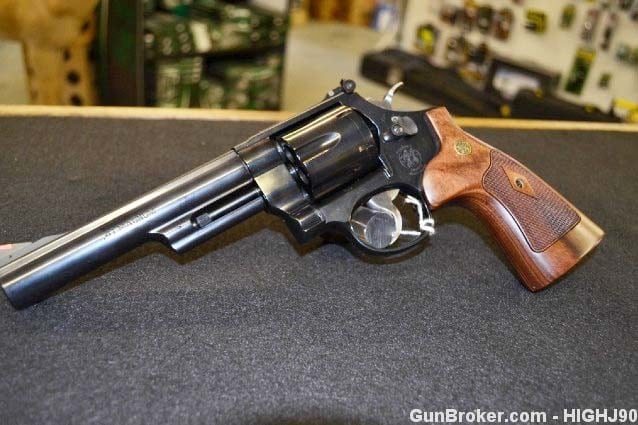 The Model 57 Classic is a real beauty (Photo Credit: Gunbroker.com)

Though I’ve owned wheelguns from most of the major manufacturers, I’m proud of Smith & Wesson for returning some of their most loved revolvers to production with the Classics.  Sure, I’m a sucker for history and romance and would often prefer to have the deep mirror blue of an early production Model 57 in its wooden presentation box. But if I want a gun to shoot and enjoy, built with both the best of the past and modern innovations of the present, this is it.  The Model 57 is an archetypal American gun that will survive to be passed from one generation to the next, to the next.