The new CMMG MK47 Mutant: The ultimate AK is an AR15

Which is better, the AK or the AR? Thirty years ago the answer would be subject to user preferences with both models having equivocal pros and cons.

Today, the basic AR-15 is a superior weapon to the AKM in nearly every regard. What if there was a way to combine the best attributes of both platforms into an accurate, heavy-hitting rifle with an appetite for inexpensive ammo and magazines?

A Shooter would have the ultimate evolution of the AK47. They’d have the CMMG MK47 Mutant. 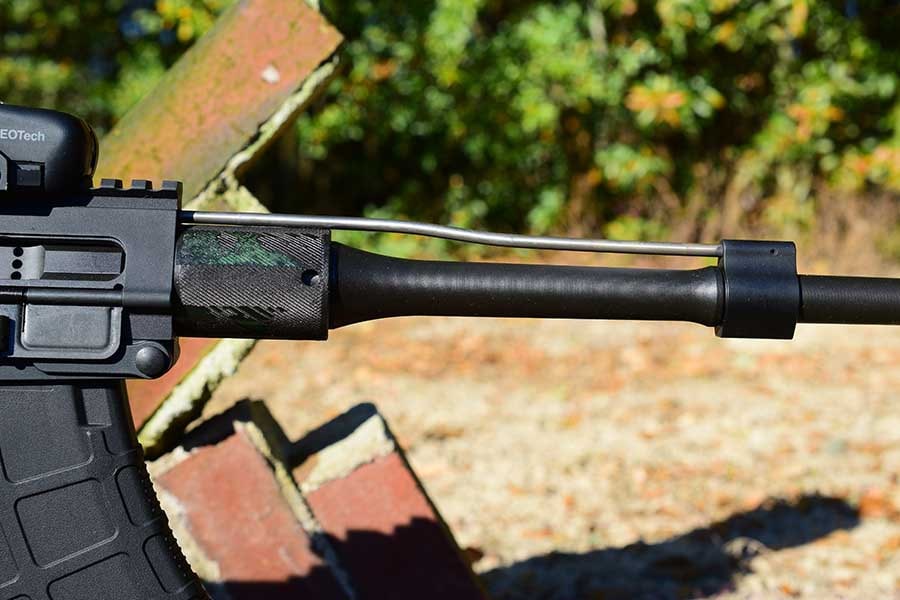 The Mutant is a 6-pound, Direct Impingement, air-cooled semi-automatic rifle chambered in 7.62x39mm. Feeding from standard AK magazines, the Mutant utilizes a modified .308 AR-10 bolt-carrier group for increased longevity of parts. Equipped with 16.1-inch free floated barrel with a 1-10-inch rate of twist, the Mutant offers shooters the most accurate semi-automatic platform for the 7.62x39mm cartridge in existence.

Purists are screaming that Mikhail is probably rolling in his grave. You know what? Good. He should be. The AKM’s controls were terrible even when it was first introduced. I’m an AK purist, but even I recognize that the ergonomics on an AK are okay at best. Shooters can have extended safeties and collapsible stocks installed, but these just patch the awful ergonomics without addressing the underlying issue — the design is flawed.

So CMMG did the unthinkable, choosing to ditch the folded-receiver design and instead opting for an AR-15 style receiver and direct impingement operating method. 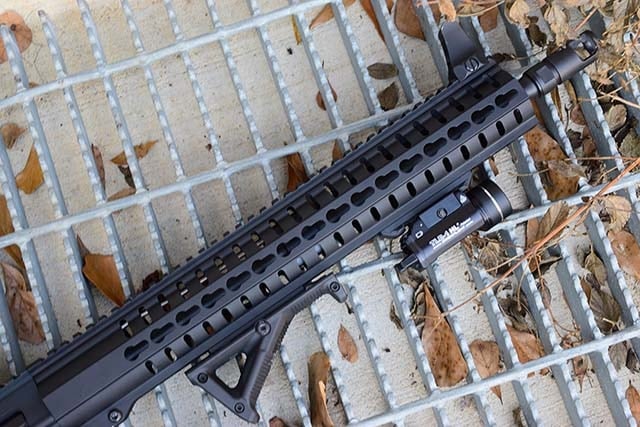 I’m sure every armchair commando is clamoring about how direct impingement is terrible, proclaiming the gun will have more jams than a Smucker’s factory. While direct impingement is a less reliable system than the long-stroke gas system found on AK rifles, the difference is vastly overstated.  Modern DI AR-15 rifles are vastly more reliable than their predecessors even with less-than-deal ammunition.

Though accuracy isn’t the only category where the MK47 outshines the AK. It also has the gold-standard ergonomics of the AR15 series of rifles. Shooters no longer have to use the clunky AK side rail to mount optics. This alone is game-changing since AK side-rails mount scopes too high for shooters to utilize a proper cheek-weld. This combined with the quick-access AR15 selector switch and collapsible stock elevate the Mutant miles above the average Kalashnikov.

Despite weighing up to 40 percent less than a standard AK rifle, the MK47 has less felt recoil. This is due to the Mutant’s combination of the AR inline design and the aggressive AK-74 style Muzzle brake that comes standard on the MK47. The brake significantly reduces the impulse of the MK47’s carbine-length gas system, which is more violent than rifle or mid-length ones. 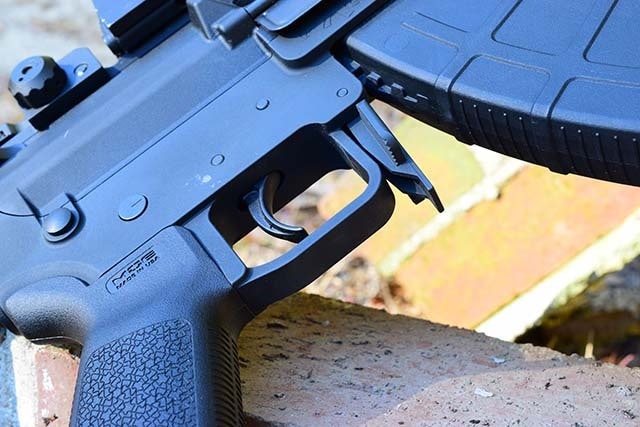 Additionally, this brake can be swapped out for a .308 muzzle brake or suppressor, offering fans of the 7.62×39 cartridge an appropriate platform to suppress their favorite round.

In the past, companies tried to combine the two designs with lukewarm results at best. Like the Colt 7.62×39 sporter with its unreliable, expensive magazines. The Mutant differs from this by using the most reliable magazines on the planet: AK47 mags. In fact, Magpul got the idea for its anti-tilt followers from the AK mag. The other good thing about AK magazines is legendary durability.

Ammo and magazine commonality are the biggest selling points of the Mutant for AK enthusiasts. Both are inexpensive and plentiful, even to shooters in ban-states. It’s also the one aspect of the gun’s design I am most concerned with.

Why, might you ask? AK magazines come in all shapes, sizes and materials. For the Mutant to be a truly viable weapon system, it needs to work with most, if not all AK magazines. As an AK-lover, I dug out every make of AK magazine I currently own to test them with the Mutant. 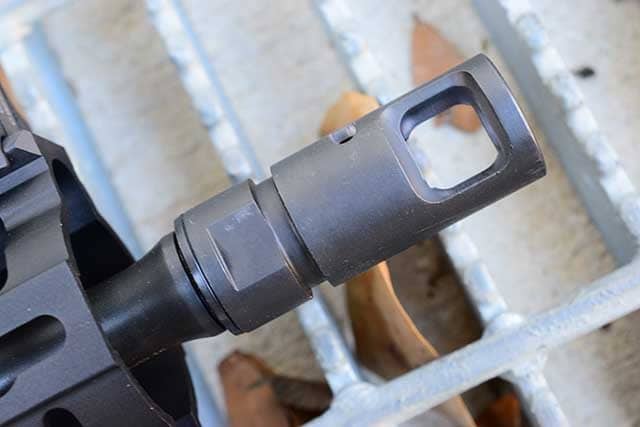 In testing, the Mutant ran 100 percent with all steel magazines. This includes those made in Hungry, Russian, Hungary, Yugoslavia, Romania, Serbia and Korea. It also flawlessly ran with All American-made polymer magazines from ProMag, Tapco, Magpul and Plinker Arms.

The only two magazines I didn’t have on hand to test were the Pro Mag 100-round and Russian AK-103 polymer magazine.

During this testing I came to appreciate one of the Mutant’s finest advantages over an AKM-pattern rifle. Its modularity. Thanks to the Mutant’s Free-floated RKM 15 Keymod handguard, altering weapon’s configuration doesn’t affect accuracy or point of impact.

For reliability, I changed the weapon to a CQB carbine, installing an EOtech 552 holosight, a Magpul angled foregrip and a Streamlight TLR tac light. Across 750 rounds of ammo from Red Army Standard, Wolf,  Tula, Winchester and Klimovsk, the Mutant encountered no jams whatsoever. 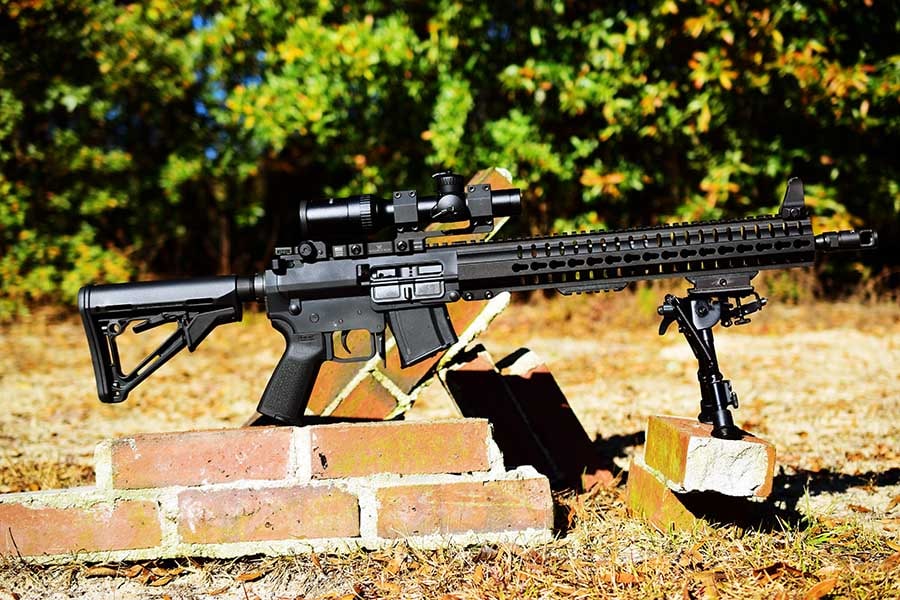 The Mutant is so versatile it can even be configured into a target rifle. (Photo: Jim Grant)

Satisfied with the Mutant’s performance, I moved on to accuracy testing.  For this the Mutant was configured like a varmint rifle with a six-times magnification scope, bipod and short, five-round magazine. This steady, low-profile setup is ideal for shooting either from the prone position or from a bench.

The most accurate ammo was Winchester’s 120 grain, PDX1 Defender grouping 1.18 inches at 100 yards, which is a tremendous improvement over standard AK rifles. In fact, I wouldn’t be surprised to learn that with hand-loaded ammo, the MK47 was capable of sub-MOA groups. If this pricey defensive ammo is too costly for a shooter’s budget, they’ll be happy to know that the more affordable Silver Bear 125 grain soft point ammo grouped an acceptable 1.3 inches.

Shooters concerned with finding bullet drop calculator-equipped optics for the new rifle can rest easy knowing the drop on .300 blackout is extremely similar to that of the 7.62x39mm round. So much so that the same reticle can be used for both with acceptable levels of accuracy. Meaning shooters won’t be stuck with sub-par Soviet optics when trying to stretch the Russian cartridge’s legs.

Retailing for $1,650, the MK47 isn’t cheap, but given the high-quality construction of its components, shooters shouldn’t expect it to be. The Mutant bests the AK with improved ergonomics, accuracy, and recoil reduction on an easy-to-scope platform with the largest selection aftermarket parts in the world. Improving what works, discarding what doesn’t. This is the foundation of adaptive design. As such, the CMMG MK47 Mutant represents the AK47 in its final, ultimate evolution.