Most headlines pertaining to the MPX, Sig Sauer’s new 9mm submachine gun and its semi-automatic civilian counterpart, focus on the legal battle over the weapon’s extended compensator. The ATF believes that the device constitutes a sound suppressor, but Sig disagrees. Though this battle is potentially critical to pro-Second Amendment supporters, it isn’t the only one Sig is embroiled in. There is another, equally fierce war occurring at Sig’s headquarters in Portsmouth, New Hampshire. A fight against physics, bureaucratic stubbornness and the king of submachine guns, Heckler & Koch.

Whenever a new submachine gun design emerges, people inevitably compare it to the HK Maschinenpistole 5, MP5 for short. This closed-bolt, roller-delayed blowback weapon has been in use for 50 years and has seen action on every continent on the planet. As the most prolific submachine gun in modern military and counter-terrorism use today, manufacturers looking to take a serious chunk of the global market must have a product demonstrably superior to the MP5. 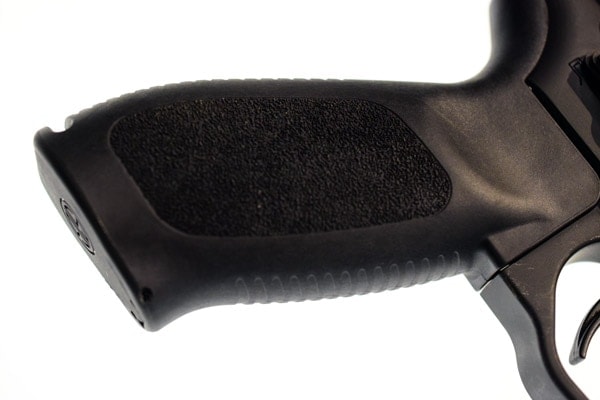 Although the MP5 has been the top-dog of submachine guns for so long, it is not without flaws. The MP5’s ergonomics require both hands to manipulate the fire-selector and magazine release, unless you have 6-inch fingers. Also, the system lacks a convenient bolt release, a special claw mount is required to attach optics and you need to replace rollers to accommodate various bullet weights and velocities. Furthermore, the platform tends to run dirtier than an AR-15 and the roller-delayed system dictates the use of a more complex and heavier bolt than a piston or direct-impingement platform.

When HK released the MP5, these shortcomings weren’t as obvious because its layout was better than previous attempts at a combat submachine gun, but that was 50 years ago. The MPX, Sig’s entry into the pistol-caliber automatic weapons market, represents an evolution in the design. Unlike most submachine gun designs, the MPX does not rely on the needlessly complex roller-delayed system or the recoil-heavy simplicity of direct blowback. Sig took what it knew about about combat rifles and applied it to SMGs, much like the Germans with their G3 rifle. 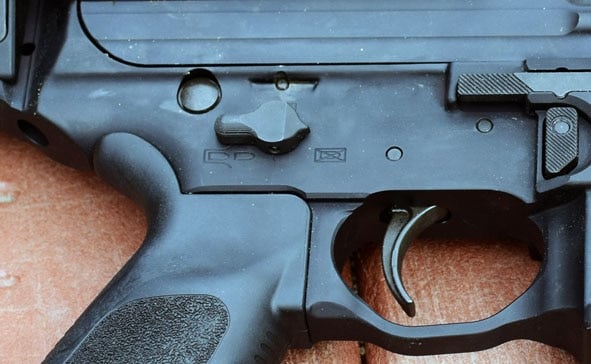 Anyone familiar with the M16 series of rifles can run an MPX with almost no additional training. The fire selector is identical in its location, shape and function and the bolt and magazine releases are also the same.

Additionally, the trigger and charging handle are exactly where any U.S. Marine, soldier or sailor would expect them. The only real differences, in terms of user-interaction, are the optional folding or collapsible stocks and their manipulation. These features don’t have to be employed, since the MPX’s receiver features a rear-rail to attach a buffer-tube extension to allow the operator to use whatever they’re most proficient with. Given the meteoric rise of optical sights on military small arms, Sig integrated a standard MIL-STD-1913 rail into the MPX receiver and equipped it with removable back-up iron sights. This allows optics meant for the M16/M4 series of rifles to co witness just as they would on their intended platforms. 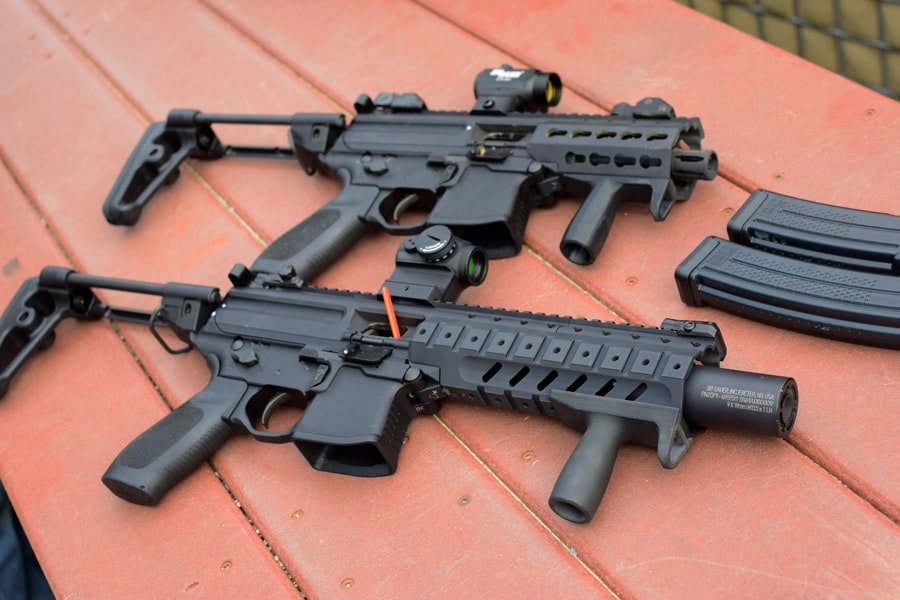 Using a short-stroke gas-piston system, the MPX is more reliable than locking-rollers, easier to charge than direct blow-back and operates cleaner than direct impingement. Unlike its biggest competitor, the MP5, Sig’s MPX utilizes aluminum and carbon-fiber, making it much lighter than previous designs. 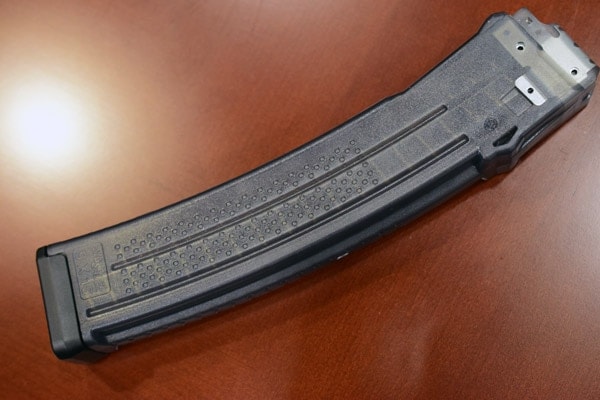 The biggest crux of any magazine-fed weapon is the magazine. Ultra-reliable weapons can’t stay in the fight if their flow of ammunition is cut short. MP5 magazines are good, but expensive and made of metal, making them susceptible to crushing or contortion. Polymer magazines have taken the shooting world by storm in the last decade or so and Sig went with one of the biggest names in polymer lead-dispensers, Lancer industries, to design the magazines for the MPX.

Comparing and contrasting statistics between the MPX and MP5 is all well and good, but nothing can change your mind about a gun like trigger time. Needless to say, when Sig invited me, along with 11 other gun writers, to its headquarters in New Hampshire to get some hands-on time with both the MPX and MCX, I was thrilled. 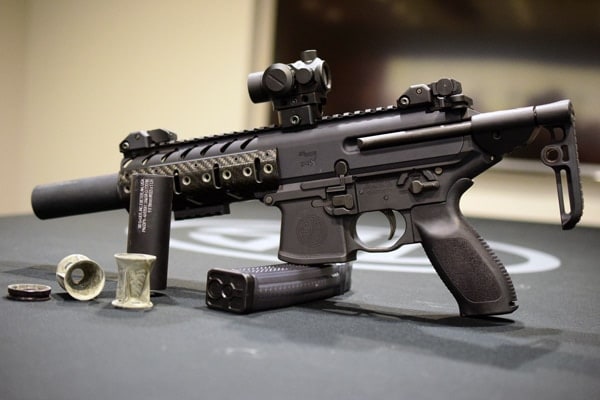 Carbon fiber, silencer and a giggle-switch? Pinch me. (Photo by Jim Grant)

The military version of the MPX has a 8.5 inch barrel and three modes of fire: safe, semi and full-auto. While current military doctrine discourages soldiers from flipping the selector to rock ‘n roll, there are some crucial moments when the ability to place multiple-rounds rapidly down range is key to survival, like close-quarters combat. Most of the time, however, firing rounds off as fast as a weapon is capable, is a tremendously enjoyable waste of ammunition. I have fired just under 1,000 rounds through an MP5SD, an MP5 Navy and the short-barreled MP5K-PDW, separately. While I am no expert on the platform, I am quite familiar with it. Therefore, when I approached the firing line with my translucent lancer magazine filled with 30 rounds of 124-grain 9mm ammo, I was expecting to expose the MPX’s superior features as marketing hype.

I was right in one regard: Sig’s marketing had failed the consumer. They failed to convey how controllable, reliable and accurate the new weapon really is. I fired six magazines through the MPX, most loaded to 30 rounds, after several writers had done the same. The majority of rounds were fired with the selector on fully-automatic and there were no failures whatsoever. This was after all of us had goaded the engineer to throw the MPX in the sand. I may have mentioned Sig’s old motto of “Hell and back reliability” since we all wanted to know how the MPX ran in real-life situations, not just the sterile conditions of an indoor range. After a 1,000-round case of Aguila’s 124-grain 9mm ammo, the MPX was hot to the touch and its rate of fire slightly diminished, but it kept on running. 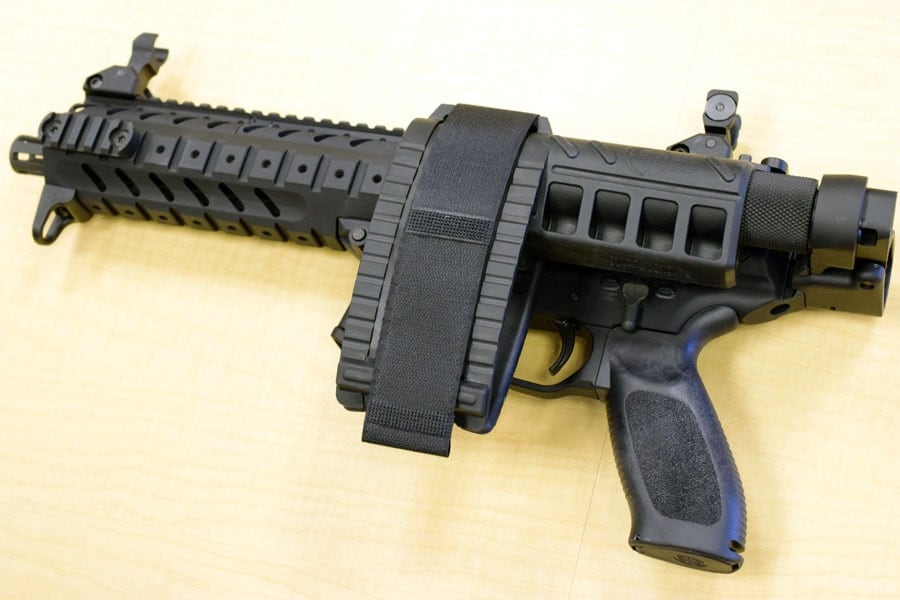 One civilian pistol variant of the MPX includes a folding arm brace. (Photo by Jim Grant)

I found the controls on the MPX to be easy to reach, familiar and positive, much like an AR-15. I was able to operate both the full-sized MPX and Kurtz model (MPX-K), with it’s 4.5 inch barrel, without having to change my grip. Admittedly, I use the magazine-well as a foregrip on shorter carbines. I could reload the MPX quickly and release the bolt with the same speed as my familiar home-defense carbine, a BCM M4A3 clone. These familiar, comfortable controls lended themselves to an easier handling submachine gun than I had anticipated. I found the standard MPX significantly more controllable than a full-sized MP5 and the compact MPX-K, surprisingly, just as controllable as the much larger standard MP5. 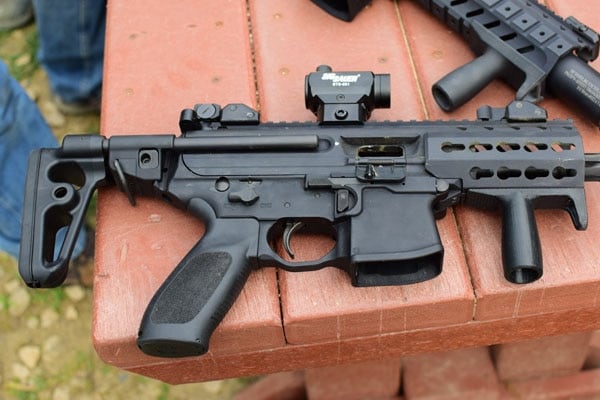 The MPX k should include a bib, since you won’t stop drooling (Photo by Jim Grant)

Both the full-sized and compact MPXs are remarkably accurate and easily made every hit on a steel silhouette target at 50 yards in semi-automatic.

After a few warm-up magazines, at 50 yards, I made hits on full-auto using controlled three-round bursts. One question that plagued my mind during the both the MPX’s reveal and the debriefing on the system by designers and engineers was, “why?” In an era where most militaries have all, but phased out the submachine gun in favor of a short carbine, why would Sig introduce a new submachine gun? It wasn’t until I spoke to some of the individuals at Sig that I understood their reasoning.

If Sig spent millions-redesigning its carbines in attempt to reach law enforcement or military market saturation in the U.S., they would have to compete with companies that have government contracts, established relationships or non-compete deals. Ultimately Sig would have to either sell its product at a loss or reengineer it to be cheaper than anyone else could make it. The first option is obviously bad-business and the second doesn’t adhere to the mission statement or principles set forth by Sig Sauer. Add to this, the fact that only a handful of companies actually make M4/AR15 receivers, then rebrand them for hundreds of smaller ones and it becomes apparent that the market resistance for carbines is tremendous, without a large opportunity for growth. The niche market for a tactical, mission-adaptable submachine gun, on the other hand, hasn’t been explored in ages. 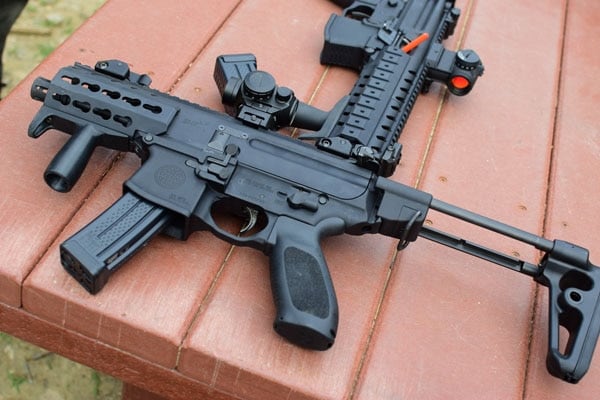 Countless agencies and departments prefer pistol-caliber automatics due to their more controllable nature, reduced weight and compact size. Unlike the military carbine market, which is inundated with thousands of competitors, the submachine gun market is large enough to turn a profit with opportunity for growth and has only a single competitor, Heckler & Koch. I predict that Sig is trying to win over this market by having their product domestically built, avoiding conflicts with the International Traffic in Arms Regulations and heavy import taxes. The civilian market benefits greatly from Sig’s pursuit of these military and law enforcement markets. These markets allow Sig to develop a top-notch submachine gun that will be the basis of a solid pistol-caliber carbine, without having to pass the cost of R&D to the consumer. 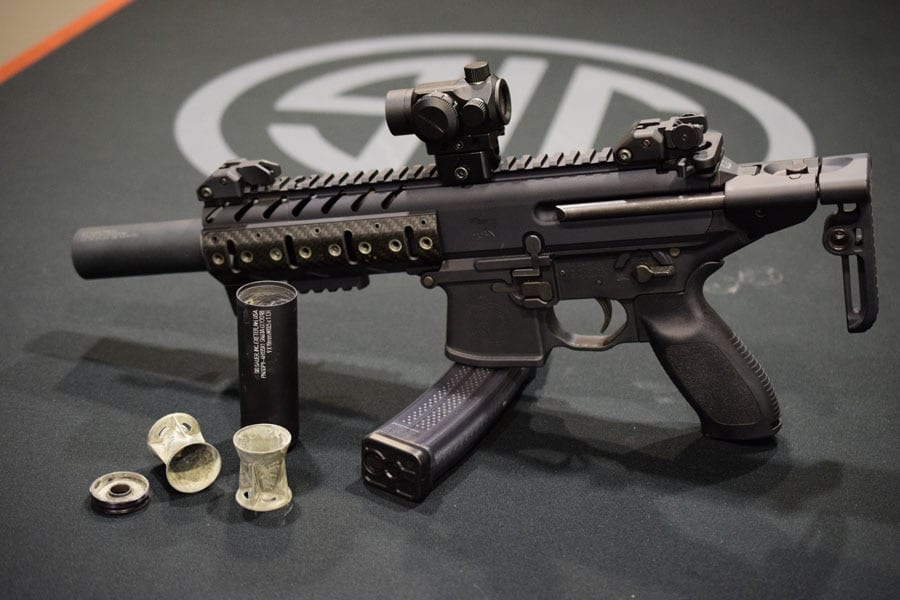 The MPX is irrefutably an awesome weapon system that is superior to existing submachine guns on the market today. What remains to be seen is if the MPX will replace the MP5 around the world and become a staple of special operations, counter-terrorism and SWAT teams. If militaries and police departments chose weapons purely based on merit, they would not find a better submachine gun than the MPX. Unfortunately, politics, backroom deals and other influences the public will likely never learn of, play a role in weapon selection and adaptation around the world. My experience with the MPX has convinced me that with proper exposure, the MPX will be the MP5 of the 21st century.