Today we think of a rifle in terms of overkill once it gets to the size of the .577 T-Rex or the .700 Nitro Express. We think that these giant elephant guns are the height of firearms genius in extremely large, yet still portable long guns. However, you just need to pick up a history book to find out that the concept is not new. The Wall Guns of the 15th-19th centuries are the best example of this.

What is a wall gun?

Wall guns are outsized rifles that look as if they once belonged to Paul Bunyan, the Barrett .50-cal of their day, only bigger.

Though smaller than true artillery, these guns were essentially sized up versions of their standard foot soldier’s musket or rifle.

Typically, they have barrel lengths measured in feet rather than inches, with the five-foot long barrel being particularly popular. Weighing 30-50 pounds, they could be carried into battle by a crew of two to three gunners or mounted on a rampart (wall) for defense of a fort from outside threats. In the field, they usually used a support pole or bipod, and when mounted on a fort, they could be fitted with a cradle and swivel. 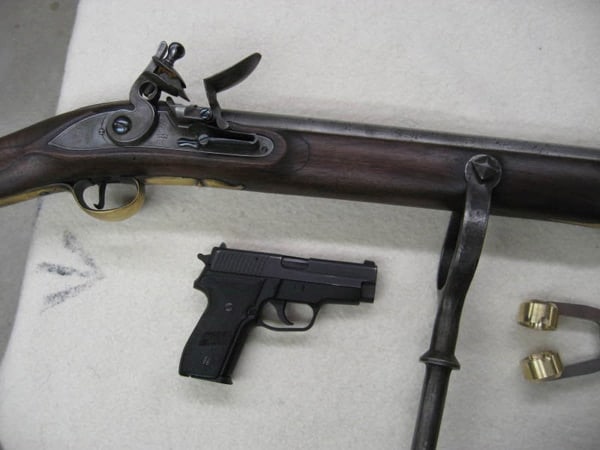 Comparison of a wall gun (with support bipod) with a full sized SIG pistol.

What they brought to the party was the same thing the Barrett brings these days: range and power. Until the arrival of the breech-loading rifle that used cartridges, most long guns could barely hit anything at 100-yards. However, pushing a golf ball sized lead projectile with a double handful of black powder from a 60-inch long barrel meant you could hit a man-sized object as far as 600-yards away.

While the basic concept of the wall gun is thought to have started in Asia as far back as the 15th century, they truly evolved first with the British. Starting around 1700, the British Army and Royal Navy began to acquire a number of super-sized flintlock muskets. With a 53-inch long smoothbore barrel as big around as a sewer pipe, the 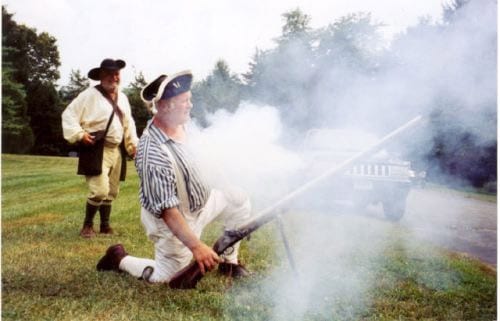 Firing a wall gun from the ground.

interior bore of the gun was 1.05-inches or about 27mm. When figured in terms of bore size, this is a 4-gauge and the ball is around 1600-grains. Overall weight with the enormous wooden stock that adds another two feet in length and gives the gun the appearance of a boat oar is 37-pounds. The flint that is held in the lock is the size of a box of kitchen matches. This gun was capable of shooting a 4-ounce ball to well over 500-yards with pretty reliable accuracy.

To put this in perspective the M82A1 Barrett rifle of today weighs 31-pounds, has a 29-inch barrel, and a 57-inch long overall length. Of course, it’s a little more accurate than the 1700s British Wall Gun, but we can see how the greater concept of theses guns has only really slightly advanced since then.

The Brits issued them out to naval vessels for close in combat along with such oddities as the Nock Valley Gun, while the British army carried them for more than a hundred years, issued out sparingly to support regiments in the field. In 1806, they were recalled to the Tower of London and many of the examples in better repair were rebarreled as huge rifles (rather than smoothbores) to further increase their range before they were withdrawn for good another fifty years later. 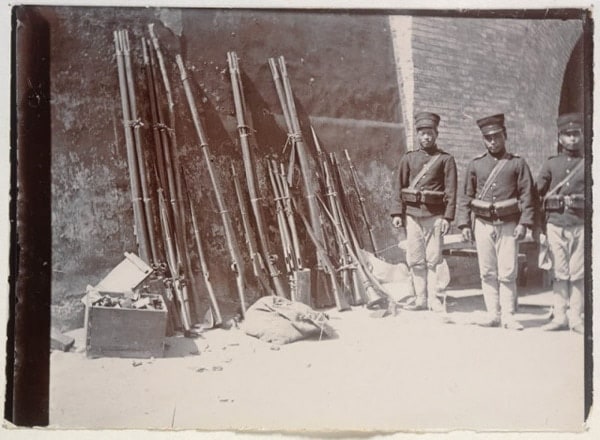 Chinese wall guns aka jingals from the early 1900s.

The Manchu Dynasty of China came into the arms market in a big way in the 19th century, eagerly buying up as much arms as they could to modernize their military. China had also long used locally developed wall guns that they referred to as jingals.

One of the biggest deals they made was for Mauser bolt-action rifles from Germany. From the Mauser design, they produced a very large wall bolt-action jingal that looks like a GEW88 on steroids.

By far collectors tend to favor the British Wall Guns. Never made in great quantity, many of these Napoleonic era guns were destroyed in an 1841 fire at the Tower of London and the few that remain are usually on exhibit somewhere.

It’s hard to even give a value of these guns as there are so few of them sold, though guns that have not been cut back extensively or modified will always command a higher price. Oddball non-British European guns from the same time period go for as much as $7000. 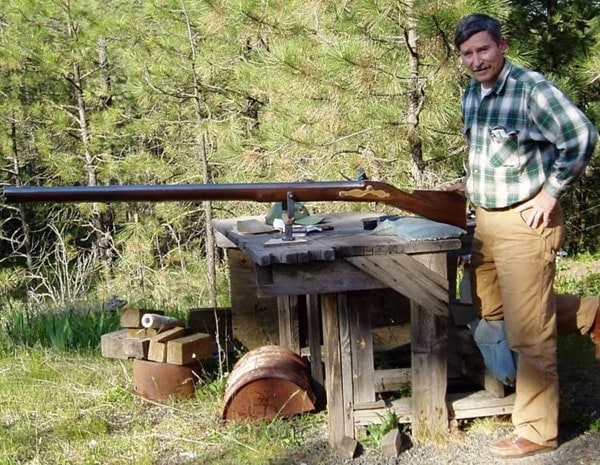 A few older Indian-made guns are floating around from before the British era. These were obtained by IMA recently.

The good news is that there is a thriving market for those who want to build their own British Wall Gun with the Rifle Shoppe selling everything you need in a kit for about $1400 to pull it off.

It’s hard to find prices on working bolt action Chinese Mauser-jingals but if you have one to sell drop me a line.

Just don’t ask me to fire it.