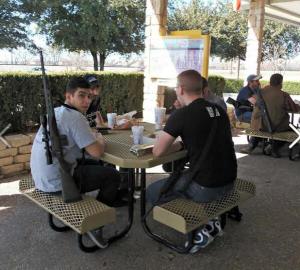 Moms Demand Action for Gun Sense in America is stringing together victories on the open-carry front, convincing restaurants and fast-food establishments to tell customers to leave their firearms at home.

The latest to do so include Chili’s Grill & Bar and Sonic, both of which announced on Friday that they would prefer if gun owners not bring firearms into store locations.

A Sonic spokesperson said, “…we’re asking that customers refrain from bringing guns onto our patios or into our indoor dining areas.”

“We recognize that the open carry of firearms in restaurants creates an uncomfortable atmosphere and is not permitted under many local liquor laws,” according to a Moms Demand Action press release.  “So, we kindly ask that guests refrain from openly carrying firearms into our restaurants and we will continue to follow state and local laws on this issue.”

The action was precipitated by an open-carry demonstration by a group of gun-rights advocates that believe one of the best ways to raise awareness for their cause is to carry openly without notifying police, the public or the businesses they plan on patronizing.

To say it’s controversial would be an understatement and one could argue that their plan has backfired in that Starbucks, Jack in the Box, Chipotle and now Sonic and Chili’s have all released statements urging gun owners to refrain from carrying in their locations.

Not only that, it’s given Moms Demand Action something to brag about.

“Moms thank Sonic and Brinker International, which includes Chili’s Grill & Bar, for taking action to stand up for the safety and security of our families – we are heartened that we can take our children to these family-oriented restaurants and not worry about being confronted by customers with semiautomatic rifles,” said Shannon Watts, Founder of Moms Demand Action for Gun Sense in America.

“Brinker International and Sonic’s decisions to ask customers to not bring firearms into their restaurants are bold and meaningful, showing that you can support the Second Amendment while taking reasonable measures to ensure that Americans are safe and secure in the places we take our children,” Watts continued. “American businesses and restaurants should not wait for open carry extremists to demonstrate in their establishments – now is the time to stand up for the safety of employees and customers.”