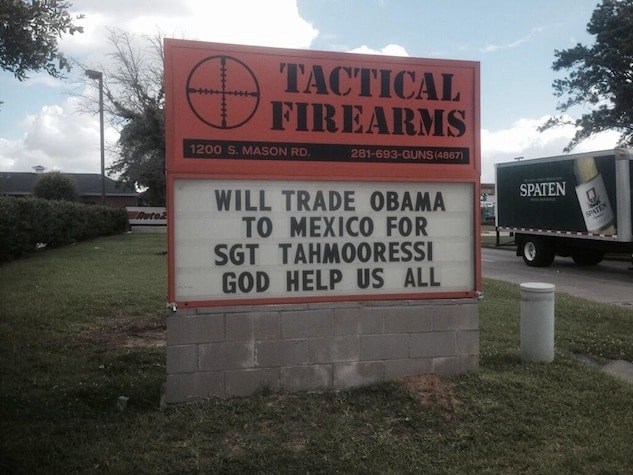 Texas-based Tactical Firearms is at it again with another slogan. This time it read, “Will trade Obama to Mexico for Sgt Tahmooressi God help us all.”

A Texas gun store that is famous for its clever marquee slogans has topped itself yet again.

Tactical Firearms owner Jeremy Alcede is fond of using his store marquee as a political platform. He previously posted the slogan “I like my guns like Obama likes his voters undocumented,” and now he is at it again with yet another phrase. This time his sign reads, “Will trade Obama to Mexico for Sgt. Tahmooressi God help us all,” Young Cons reports.

Guns.com previously reported that Sgt. Andrew Tahmooressi is the U.S. Marine who has been detained in a Mexican jail since March for accidentally crossing the border with firearms that are illegal in Mexico.

“They were threatening to take my guns, take my truck, and take all my possession,” said Tahmooressi. “And I told them, I said, ‘Hey, take everything you want. Just let me go back to America.’ They put me under arrest and that was pretty much it.”

The photo of the marquee was posted to the store’s Twitter account and the caption read, “Can I get an AMEN?”