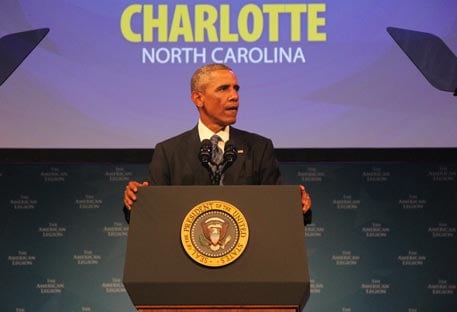 CHARLOTTTE—President Obama announced plans for 19 executive actions aimed at helping veterans during his speech at the American Legion national convention in Charlotte, North Carolina, on Tuesday.

The White House announced the president’s policy changes just before he made his remarks and outlined some of the public-private sector partnerships that will help the process forward.

The Department of Defense and the National Institutes of Health will launch a project aimed at suicide prevention, post-traumatic stress disorder and the long-term effects of traumatic brain injury, the White House said.

The VA will launch a $34.4 million suicide prevention study with 1,800 veterans at 29 hospitals and the Defense Advanced Research Projects Agency plans to spend $78.9 million on a research program studying the use of neurotechnologies in treating many diseases, including PTSD, according to the Obama Administration.

In his remarks, the president blamed the backlog on an influx of new claims for PTSD and Agent Orange exposure. Obama’s visit came just months after his administration drew criticism for the mismanagement of the VA healthcare system and the subsequent firing of its top administrator.

The president last month signed a $16.3 billion law to help the VA deal with the claims backlog.

On stage with Obama was Robert McDonald, an Army veteran and corporate executive chosen to replace VA Secretary Erik Shinseki.

“Washington doesn’t agree on much these days, but he got confirmed 97 to 0,” Obama said. “People understand he’s the right man for the job.  He has my full support.  And, Bob, I want to thank you for once again serving your country.”