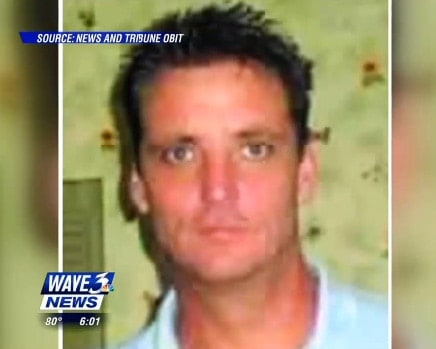 David Johnson’s stepfather said he had struggles in the past. (Photo: WAVE 3)

Kenneth Catlett said he acted in self-defense when he shot a man who followed his son to his Louisville, Kentucky, home after an incident of road rage sparked in an adjacent state.

The incident occurred on April 4, but Catlett, who was visibly upset over the ordeal, only talked to reporters from a local NBC affiliate Monday.

Catlett said his son called him while driving home and told him that something just wasn’t quite right. He told Catlett that a man had been following him since he was on the interstate in southern Indiana.

Catlett grabbed his gun and walked outside to wait for his son’s arrival. When the son pulled up to the house around 1 a.m., the man, later identified as David Scott Johnson, 44, of Jeffersonville, Indiana, pulled up as well.

Catlett said Johnson got out of his car and starting yelling that the son had cut him off.

Then Catlett noticed a gun in Johnson’s hand, right before he began to attack his son and hit him with the gun. Catlett fired a warning shot to let Johnson know it “was serious,” then the two men tackled Johnson to the ground and disarmed him.

Catlett told Johnson is was over and time for him to leave. Johnson went to his car, but instead of leaving, he got a hammer. When he came at Catlett and his son again, hammer in hand, Catlett fired his gun again, this time striking Johnson a single time.

Although he had been shot, Johnson got into his car and drove off. He was found deceased in his vehicle at a nearby intersection where a memorial has since been erected.

No charges have been filed against Catlett at this time, but he said that although his actions may have been justified and he was protecting himself and his son, it doesn’t mean he can necessarily live well with the fact that he took another man’s life.

Still, he said he made a decision that no man should ever have to make.