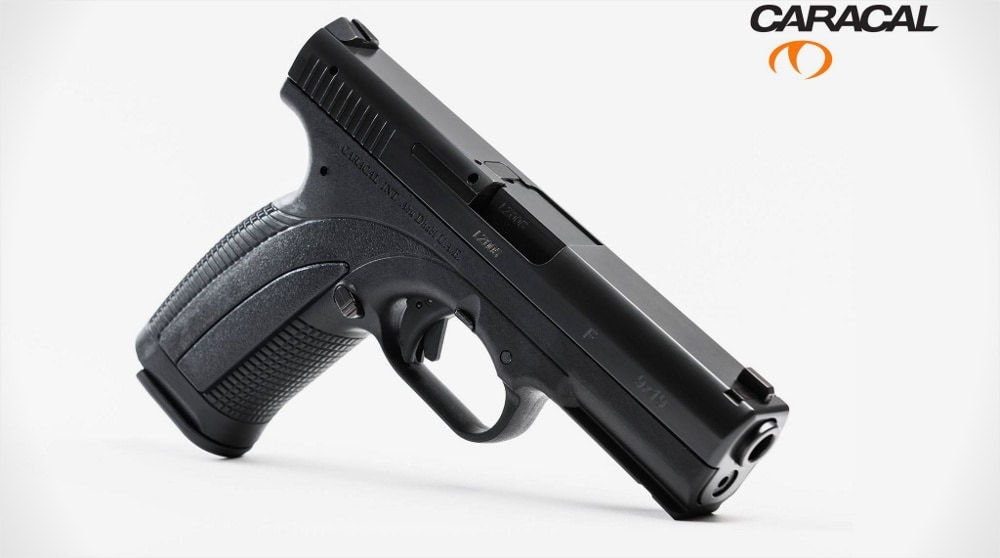 The re-designed Caracal F is expected to return to stores in June 2015. It’s pretty true to the original aesthetic with light vertical slide serrations and a very low bore axis. (Photo: Caracal USA)

Caracal has been off the market long enough that the company will benefit from a new introduction. The company first launched with a singular goal: to be the leading small arms manufacturer in the Middle East, offering an advanced catalog of rifles, pistols and carbines to friendly states including the U.S.

Caracal calls the UAE home and the company’s intent was to make a jewel for their national crown — something in-line with their wealth and status yet still completely practical and duty-minded. They were tooling up to be a 21st century Browning or Glock, and went so far as to hire Wilhelm Bubits, former Glock engineer and the man behind Steyr’s handguns.

The company saw immediate success and a wide welcome, not something just any small arms manufacturer could do today. It would be hard to find anyone to criticize their products, especially their pistols. Caracal originally developed three handguns, two for export to the U.S.: the full-size F model and mid-size C or compact model.

Anyone who has shot them will be quick to point out that they had a near-universal grip with a natural shape and angle, a maxed-out sight radius and wide open, easy-to-use sight that jumped right back on target, and a very low bore axis that tackled recoil even loaded with hot .40 S&W rounds. But mostly people just loved the trigger.

Caracal’s pistols were part of a new wave of polymer-framed, striker-fired handguns that were changing what service pistol triggers were supposed to be. Mechanically, they don’t need to be spongy, gritty short double-action trigger pulls in the 8- to 9-pound range like they are with older designs. Caracal, along with other pistols like the FN FNS and Walther PPQ, were setting a new 5- to 6- pound standard, with light take-ups and crisp single-action-like breaks.

On top of everything they were exceptionally affordable, undercutting other service pistols by $200 to $300. It was an impressively simple design with less than 30 parts total, including pins and springs. They were in a great position to succeed, which means they were also in the perfect position to fall, and things got rocky, fast.

Following reports of a cracked slide — they had a particularly narrow profile, part of what made them so thin and light — Caracal issued a recall. The recall actually centered on the drop safeties potentially disengaging, although it was clear, the pistols were to be called back, scrapped, and replaced with a new design.

The company tried to stay relevant in the coming weeks and months after they issued an across-the-board recall on their C and F pistols in 2013, but without product on shelves they have since become a reminder of what was not to be. Every so often they’d release photos of potential future handguns, including other models like a series of 1911s and prototype alloy-framed striker-fired pistols, but without anything to offer customers, they’ve drifted towards insignificance.

That could be changing with — bear with us — an updated recall announcement. Caracal USA is repeating the recall on all C and F models for this year. The announcement conceals a gem: Caracal has given shooters a date. The company expects to have replacement F model pistols in customer hands starting in June, with C models to follow, although the date there has not been stated.

Existing owners of Caracal pistols — anyone who hasn’t already returned their pistols for replacement or a full refund back in 2012 or 2013 — is urged to contact Caracal to sign up for a replacement or a refund today.

The Caracal carbines are also getting teased. These blowback pistol-caliber carbines use handgun magazines and were intended to be the perfect companion for Caracal pistols. (Photo: Caracal USA)

But for fans of the design this means something different. The tide may be, at long last, turning for Caracal and their compelling handguns. Hopefully soon we’ll see their products on shelves, including some of their other guns that never made it to stores back in the day.

Right now the company is teasing their guns, mostly on Facebook. Things could change pretty soon, and fingers crossed, the company will be relevant once again. The Caracal recall was a perfect storm that showcased just how difficult it can be not only to design and import a new gun to the U.S., but how hard it is to turn around, redesign, and re-make a brand in the U.S.

Caracal International and Caracal USA aren’t giving up in the slightest.

“I would like to personally thank every one of you who have put your money on the line to try the new — at the time — Caracal pistols,” said U.S. market manager and long-range shooter Jeff Spalding. “You, as an owner and user have had the opportunity to feel what I felt back in 2010. You know, just as I do, that the Caracal pistol has the potential to be a real game changer. And, the Caracal pistol is just one of many exciting products coming from the production facilities of Caracal.

“I sincerely hope that I can earn back your trust, support and business once we are up and running in the near future,” he closed.

Is 2015 going to be the year of the Caracal pistol? If June doesn’t hold the answer, July might.