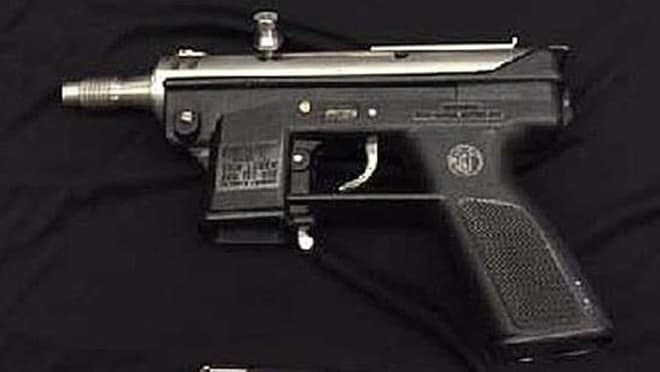 Following a pursuit, authorities found one of the suspects to be in possession of a Tech-9. (Photo: Lowell Police Department)

A convenience store owner in Lowell, Massachusetts, was targeted for a robbery late Wednesday night, and although the suspects made off with thousands of dollars in cash, the owner still fought back and one of the suspects is now in custody.

Kim Seng was closing his shop just before 9 p.m. when two black males wearing dark clothing and hoodies and armed with guns entered his store, jumped over the counter and tackled him. They completely emptied the cash register and took a total of about $10,000 before Seng was able to get to his gun and fire at them as they ran out of the store. The incident only lasted a couple of minutes, but was captured on the store’s surveillance video.

The suspects were not hit, but according to a report from the Lowell Sun, Lowell Police Officer Luis Rios was on patrol at the time and happened to be driving by the store when the two suspects emerged. Rios followed the suspects, but they eluded authorities for a short time.

About an hour after the robbery, officers found a man who matched the suspect’s description hiding in someone’s yard near the scene of the robbery. The suspect again fled on foot, but dropped a backpack during the pursuit. Authorities discovered there was a loaded Tec 9 in the man’s backpack.

The suspect, Matthew A. Fisher, 28, was taken into custody and charged with unlawful carrying of a high capacity firearm, unlawful possession of ammunition, possession of a firearm with obliterated serial number and armed career criminal.

The second suspect was not found, nor was the cash which was taken during the robbery.

Seng, who authorities confirmed has a concealed carry permit and a legally owned firearm, said he shot to protect himself and that which he has worked so hard to attain. Seng, who often works 15-hour days, told a local CBS affiliate he has owned the store for about 16 years and never had a problem in the past.