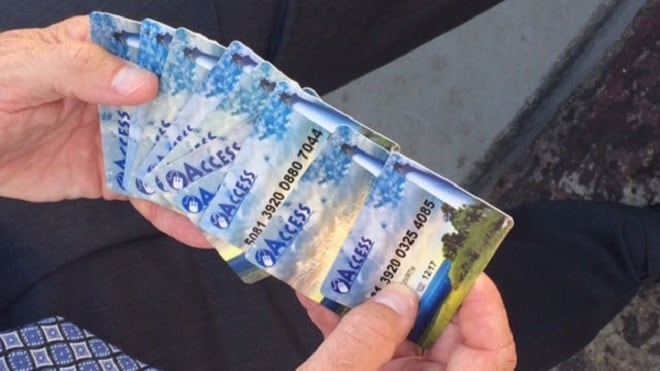 Bills in the Florida legislature could see punishments for EBT fraud such as swapping cards for guns, increase. (Photo: WFTV)

A Republican lawmaker wants stiffer penalties for Floridians who swap out their Electronic Benefits Transfer “food stamp” cards for non-food items like drugs and guns.

The measure, pre-filed for the 2016 session, aims to help cut down on the underground traffic in buying, selling and trading state-issued EBT cards designed for families in need by making certain swaps for non-food items a felony.

“People are doing this outside the business world and within the confines of their own home. They are really defrauding government,” said Sen. Travis Hutson, R-Elkton, the legislation’s sponsor.

Huston’s proposal, SB 218, would make it a third-degree felony to possess two or more EBT cards that have been issued to other people and attempt to sell one. Further, it would expressly forbid trading cards or benefits in exchange for firearms, ammunition, explosives, or controlled substances.

Those found in violation could see up to five years in prison and $5,000 in fines. In addition, Hutson’s bill would authorize a mandatory sentence enhancer of six months of community service with a nonprofit entity that works in food distribution for the needy such as a food pantry or soup kitchen.

State authorities in recent years have been fighting an on-going battle against the illegal trade of EBT cards, sometimes sold for pennies on the dollar.

According to the National Conference of State Legislatures, at least 25 states have laws placing restrictions on the use of EBT cards at casinos, strip clubs and liquor stores while prohibitions against the purchase of lottery tickets, tattoos and guns are also common.

However, not all lawmakers agree.

Both proposals have been referred to committee.