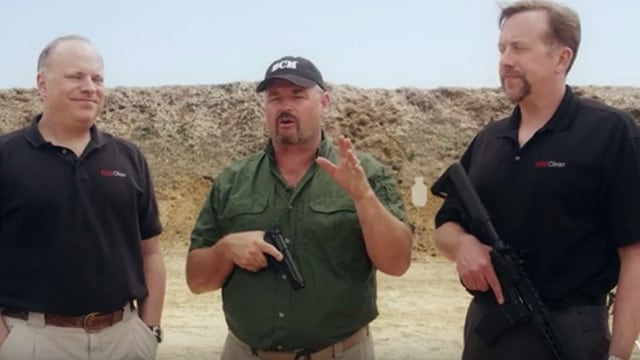 Edward Sugg, left, professional shooter Larry Vickers, and David Sugg demonstrate the effectiveness of FireClean as a lubricant in response to Andrew Tuohy’s work in 2015. (Photo: Bearing Arms via YouTube)

Two months after a federal judge dismissed FireClean’s defamation case against an Arizona blogger, the gun lubricant maker re-filed allegations in another state.

FireClean’s owners, brothers David and Edward Sugg, maintain their argument that Andrew Tuohy, owner of Vuurwapen Blog, made false claims about their product in his analysis of the lubricant’s chemical makeup.

The Suggs say every day since Tuohy published his findings they have suffered $100 in emotional stress and another $100 in reputational harm. They also blame Tuohy’s work for more than $150,000 in lost revenue.

The new complaint, filed Sept. 11, repackages arguments from the initial case, but also lists a host of new details. The new lawsuit lists the Suggs as plaintiffs, they filed in an Arizona federal court and claim trademark infringement rather than defamation.

Also, the Suggs only list Tuohy — and his personal information — as a defendant whereas initially they listed a conspirer who published a follow-up to Tuohy’s work that showed similar findings.

According to the new complaint, Tuohy’s motive in defaming FireClean was to bolster his reputation in the gun community, drive more traffic to his website and social media accounts, and sell T-shirts.

Tuohy has earned roughly $400 since launching the T-shirt endeavor in February 2016, according to court documents filed in the previous case.

A Virginia federal court cited a lack of personal jurisdiction when dismissing the initial case. According to the order, the company failed to prove the two bloggers specifically sought readers and customers in Virginia.

Last September, Tuohy published results of an infrared spectroscopy — a scientific test designed for identifying chemicals — that showed FireClean was similar to vegetable cooking oil. He said he performed the test after a competing lube company claimed FireClean was repackaged Crisco. FireClean maintains Tuohy used an improper method to analyze the lubricant.

George Fennell, owner of gun lube company Weapons Shield, started the rumor that FireClean is Crisco two months before Tuohy explored the concept. Fennell and his company are the subject of an ongoing case that was filed alongside the initial case against Tuohy in March.