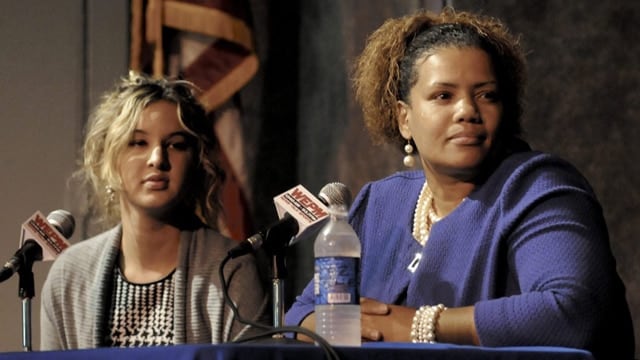 Saira Blair, left, the incumbent in the West Virginia House of Delegates 59th District at a debate with challenger Cat Webster, right, at a debate in October. (Photo: Ron Agnir/Journal News)

Voters in West Virginia’s 59th House of Delegates district re-elected Saira Blair, a 20-year-old college student who was the youngest lawmaker in the country when she was first elected in 2014.

Blair, a republican, defeated her opponent, Cat Webster, by more than 3,000 votes Tuesday night. Blair is studying economics and Spanish at West Virginia University, and has campaigned on conservative values, working on pro-life measures while in office, and supporting the Second Amendment and the Constitution.

Webster, a Democrat, is a stay at home mom who campaigned on generating revenue from medical marijuana and solar power. During the campaign, she said the district needed someone at the helm with actual life experience.

“When you have real-life experience, you are able to make decisions based on intrinsic values rather than going to others for help or input,” said Webster, according to Herald Mail Media. “When I look at her voting record, I can’t see how her life experience has led her to make those votes.”