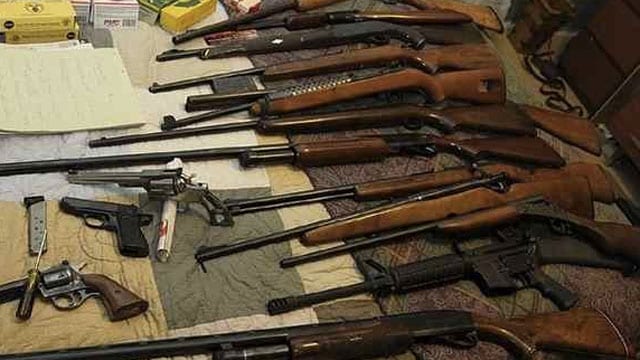 Some of the 25 guns found at DeMulle’s home and office. (Photo: Department of Justice)

The 75-year-old editor of a Los-Angeles area community newspaper was sentenced to 41 months in federal prison Monday for illegal possession of firearms and ammunition.

According to an indictment, David “Doc” DeMulle, of Tujunga, was found to be in possession of 25 firearms and hundreds of pounds – not rounds – of ammunition. Due to felony convictions of perjury and welfare fraud in 1990, DeMulle is prohibited from possessing such items.

DeMulle pleaded guilty to being a convicted felon in possession of firearms in 2016 and has been free on bond since his arrest in 2015. According to Thom Mrozek, spokesman for the U.S. attorney in Los Angeles, DeMulle plans to file an appeal.

DeMulle’s arrest came as the result of an investigation which was sparked by an advertisement in The Foothills Paper, a Sunland/Tujunga newspaper in which DeMulle is the editor-in-chief. The newspaper published a “Guns for Haiti Quake Relief” ad, in which the publication asked for gun donations. According to court documents, these guns were to be sold and the proceeds donated to Haitian earthquake victims.

Undercover officers with the Los Angeles Police Department responded to the ad and “donated” two guns to the relief efforts. Those guns were illegally accepted by DeMulle.

Subsequently, search warrants were executed at DeMulle’s home and office, which led to the discovery of 23 additional firearms and a large amount of ammo.

During the investigation, authorities learned DeMulle previously ran classified advertisements in the newspaper, which led to the purchase of multiple firearms from a private citizen. During this transaction, DeMulle told the seller he had a federal firearms dealer’s license and “would handle the firearms transfer paperwork.” DeMulle does not possess such a license, nor are there any records of him doing any paperwork for the transaction.

But in an email to the Los Angeles Times, DeMulle said he was “railroaded by a biased judge and a corrupt” prosecutor. DeMulle denied ever having received any firearms – including those he accepted from the undercover cops – as a result of the ad, which he said was a “joke.” DeMulle said he did, however, receive “about $50,000 in expendable medical supplies from USC Medical Center and shipped them to a relief agency.”

In a similar email sent to the Southern California News Group, DeMulle described the court proceedings as a “2 ring circus with the animals laughing and snickering in the back of the court.” He also accused the court and prosecutors of “collusion.”