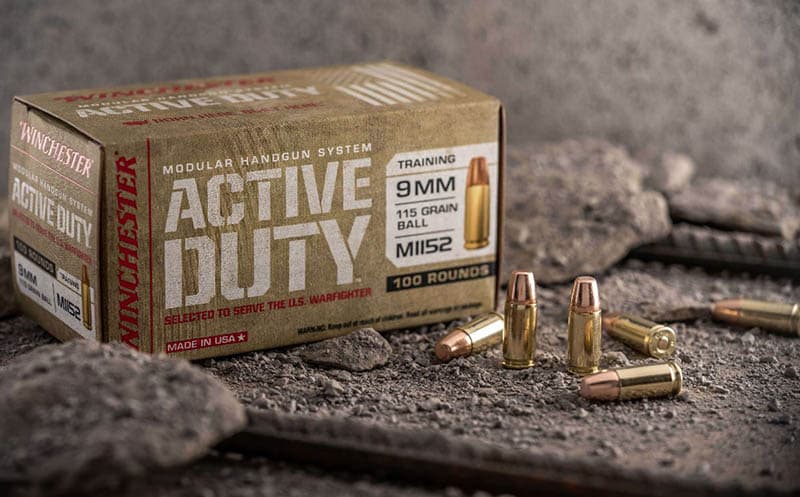 The new Active Duty round features the same characteristics as the ammo the U.S. Army carries. (Photo: Winchester)

Winchester opens its MHS program ammunition up to consumers, allowing civilians to now use the same handgun ammo has the U.S. Army in the new Active Duty load.

The training ammo uses a 115-grain flat nose full metal jacket design with military-grade primer. The concoction is the same used for the United States Army’s Modular Handgun System. The load is said to offer both accuracy and reliability, according to Winchester.

“Winchester proudly developed M1152 to serve alongside the U.S. Warfighter and was selected as the sole source ammunition supplier for the United States Army Modular Handgun System (MHS) Program,” Winchester said in a news release. “Consumers can now use the same product selected by the US Military for their training needs.”

The 9mm load offers a muzzle velocity of 1,320 feet-per-second and will ship in a variety of quantities, including 100 rounds and 150 rounds. To really up the ante and get that true-to-military vibe, pair the Active Duty ammo with the Sig Sauer P320.

Winchester, in 2016, was selected by the military to supply as many as 100 million rounds of 9mm ammunition– M1152 Ball, M1153 Special Purpose, and M1156 Drilled Dummy Inert– to the Pentagon as part of Sig Sauer’s successful MHS program. Further, the company and Heckler & Koch are sub-contractors to Textron Systems. Textron Systems was one of three prime contractors recently awarded contracts to provide the Army’s planned new Next Generation Squad Weapon, chambered in 6.8mm.