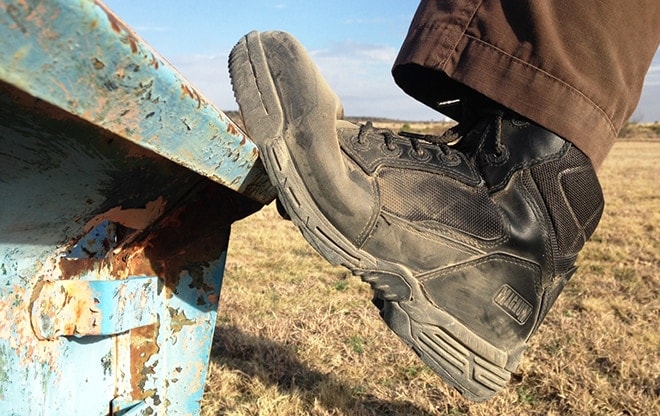 Footwear is critical to the success of a mission whenever the mode of transportation includes feet for any length of time.  Magnum Boots provided its primary duty model, the Stealth Force, to us for testing and evaluation.  Although there was a problem along the way, we nonetheless conclude that Magnum Stealth Force is a boot worthy of consideration.

Calling the Stealth Force a model is kind of like calling a rifle an AR. The Stealth Force is a platform design that includes options like six- or eight-inch uppers, a side zip or none, and for men’s boots, the choice of desert tan or black. Two pairs of Stealth Force boots could thus bear little immediate resemblance to each other. 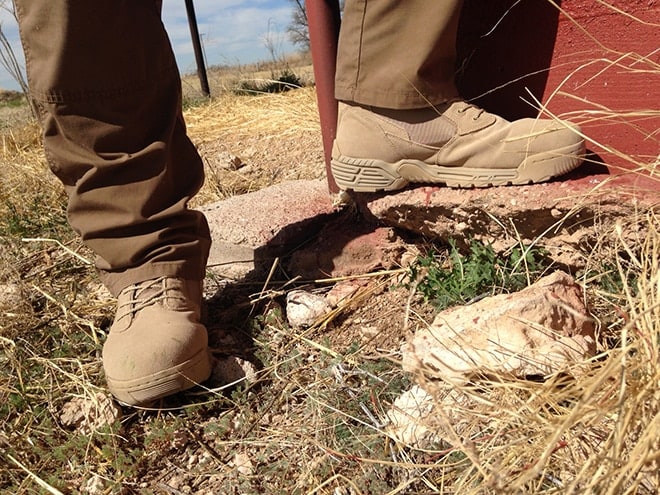 We tested the women’s six-inch, no-side zip boot, available only in black, and the men’s eight-inch in desert tan.  From the start, it was nice to be able to pick a women’s size and not simply a small men’s size.

On both boots, the tread is deep and offers good traction on slippery or rough surfaces.  A bit of sole material wraps around the boot above the sole line, improving traction when walking on rubble, and lessening the possibility of scratched leather.

The padded rear of the upper is sculpted downward at the calf for comfort, and works for that purpose.  The tongue is also thickly padded.  It would be helpful if Magnum would add a tab of some sort at the back of the upper and on the tongue to aid with putting them on. Even the six-inch model takes effort to don. 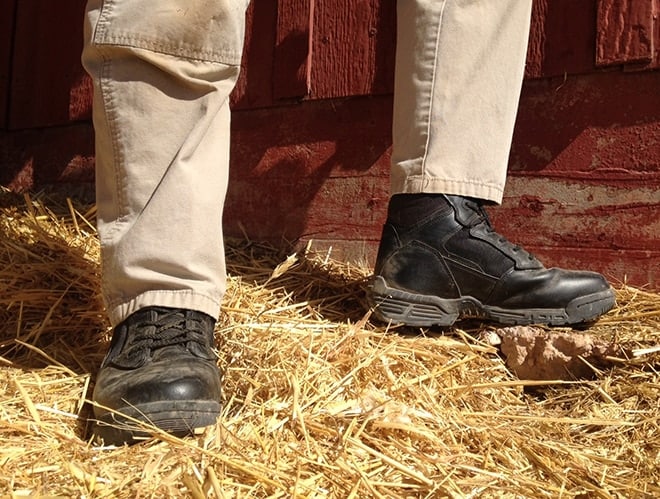 The boots are waterproof and seem like they would be warm in cold weather.  Magnum has done the industry’s current best to make them breathable as well.  If any reader owns fully breathable boots that are also waterproof, please let this writer know.  In our experience, feet will sweat in boots, sooner rather than later.

A “kick pad,” labeled as such, is a padded, leather-covered area on the outside rear of the boot, just below ankle level. The ostensible purpose is removing a boot with assistance of the opposite foot—exactly the sort of behavior that would’ve met with a scolding when this writer was a kid. 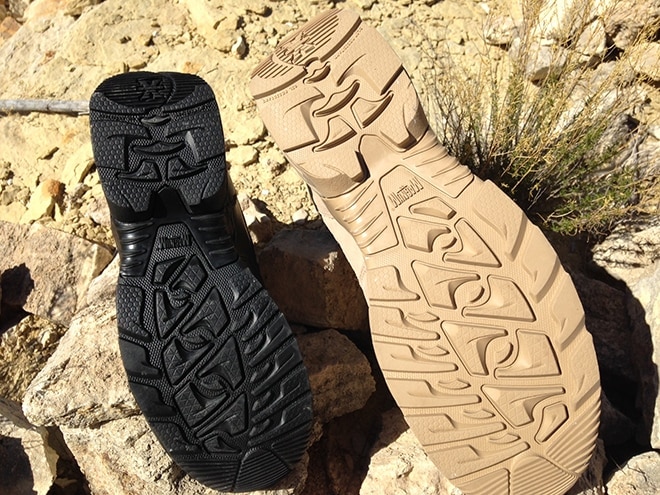 There are eyelets rather than speed lacing hooks on the ankle/leg region.  These too slow down the process of putting the boots on. It seems counter to the purpose of duty boots to have features for quick removal but not for quick dressing. This is our only complaint.

The desert tan Stealth Force upper is made of suede and ballistic nylon. It’s available in sizes 7-15, medium and wide.  It’s is currently on sale for $94.99. 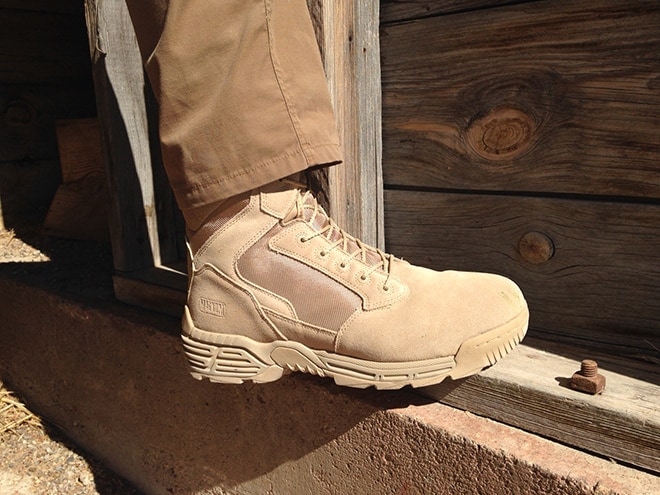 It’s notable that, on both the men’s and women’s boots of this model, the laces loop through a sewn-in nylon loop rather than an eyelet or hook at the juncture of leg and foot. It was this feature that proved problematic for our male tester.

Testing began with a couple hours’ wear including a two-mile walk on a dirt road. The boots were quite comfortable, but our tester had the beginnings of a blister on one heel.  At first, this was chalked up to lacing that was too loose. On the second trial, one of the aforementioned nylon loops on that same boot came loose, or perhaps was already broken and became visible, upon lacing them up. 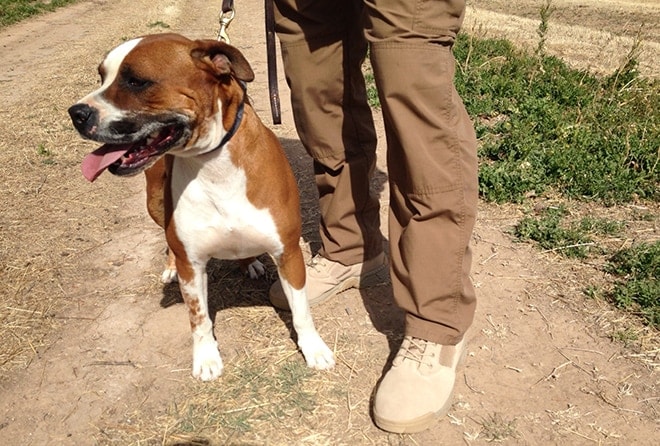 Magnum representatives were suitably surprised and embarrassed by this failure of nearly-new boots.  A replacement pair was sent in prompt fashion—another model, by our tester’s choosing, which will be the subject of a separate review.

Magnum’s website shows numerous complimentary remarks about customer service. Even as product testers, we’ve had too many experiences with company reps who were neglectful of follow-up. Magnum representatives responded almost immediately to notification of the problem, requested the boots back for inspection, paid for the shipping, and replaced the boots.  The company offers all customers its 60-day fit and comfort guarantee and a one-year warranty.  This is quite exceptional in the footwear industry.

Black is the only color offered in this version of the Stealth Force, available in sizes 5-11. Ballistic nylon and suede cover the boot where smooth leather doesn’t.  The price is $134.99, including shipping. 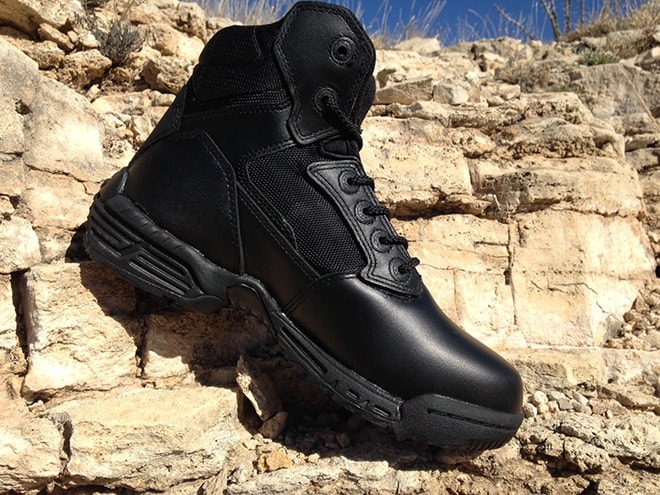 Size and fit are of course highly subjective, but these boots fit me better than most.  Sizing seemed to run on the generous side.  Having ordered the smaller of the two sizes I typically wear, I was able to lace the boots tightly without compromising room for feet.

The toe box is both high and wide. At the same time, the heel wasn’t too wide and didn’t slip.  These are factors my bunion-afflicted feet are often forced to compromise on.  The cushioning is generous.  There doesn’t seem to be a huge amount of arch support, which is to say that my fairly flat feet weren’t made to feel like each was balancing on a baseball.  If brand comparisons help, I find Ariat boots unwearable for their narrow forefoot and high arches. 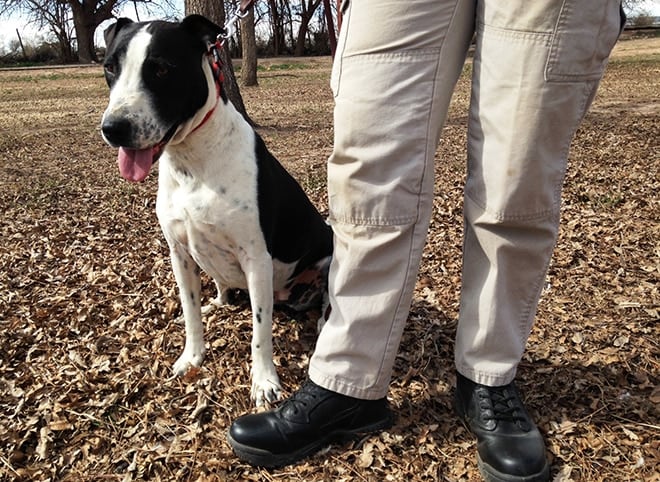 At the end of this field test, I was shocked by the lack of achiness in my feet. (Photo: Team HB)

The leather over the top of the foot wipes off easily and is polish-friendly.  It takes a little effort to clean up the woven laces and eyelets, but no more so than similar duty boots. This writer is reminded of a pair of mountain biking boots she had that had a tough leather flap that sealed over the metatarsal laces—seems that protective feature would make sense for duty boots as well.

It took approximately four work days to break these boots in.  Those days included hours of standing on a hard surface teaching, long days of standing, walking, jogging for short, 50-yard errands, carrying loads on the range, and a couple hours of moving hay bales. 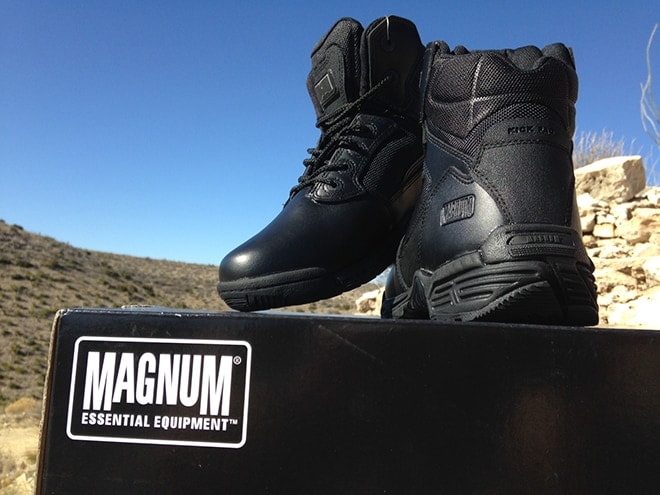 Properly laced and tightened, the boots proved very comfortable for all-day wear.  After long days in the Stealth Force, my feet are surprisingly free of the fatigue and achiness I used to think were inevitable after all day at the range. The soles are quite flexible and bend at the balls of the feet after break-in, a trait that reduces fatigue in comparison to stiff soles.  As of this writing, I’ve worn the boots three or four days per week for nearly two months.  They’re extraordinarily comfortable to my diagnosably flat and bunion-afflicted feet.

Heat-absorbing black is simply not friendly for hot desert summer wear.  I wish market forces were such that Magnum also offered women’s boots in desert tan.

Breathability is quite good in comparison to other boots, even though there’s no mesh material.  That’s impressive considering these boots are waterproof. 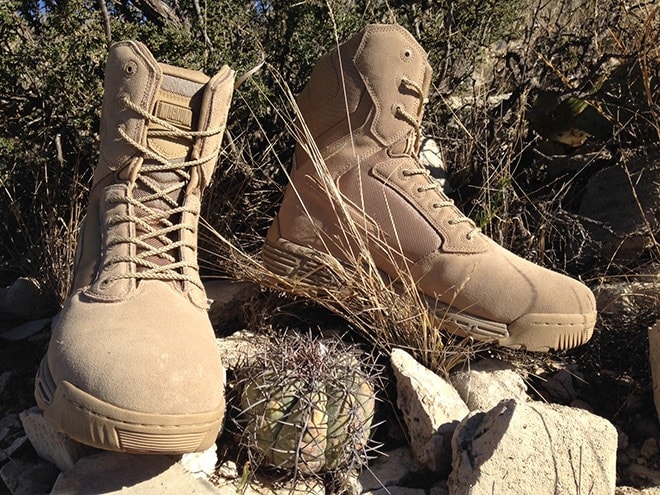 Desert Tan is only available for the men’s boot, which is a shame. (Photo: Team HB)

Our test was obviously not without issue.  However, the fit of Magnum Stealth Force boots, especially the flexible soles, and the company’s customer support. are reason enough for us to choose this brand on future purchases. In fact, this writer is as happy in Magnum Boots as Lt. Dangle of Reno 911 leaving Zapateria la Bailerina.