As home invasions have risen and criminals have become more bold, the need for a home defense weapon has become ever present. Designed to give home owners and renters alike the means to protect themselves, home defense guns come in a few styles depending on users skill level and needs. Though there’s an endless supply of firearms lining dealer shelves, Guns.com has narrowed down the field to deliver our favorite guns best used for home defense. Without further ado, here’s our guide to the top five most useful firearms to protect what’s yours. 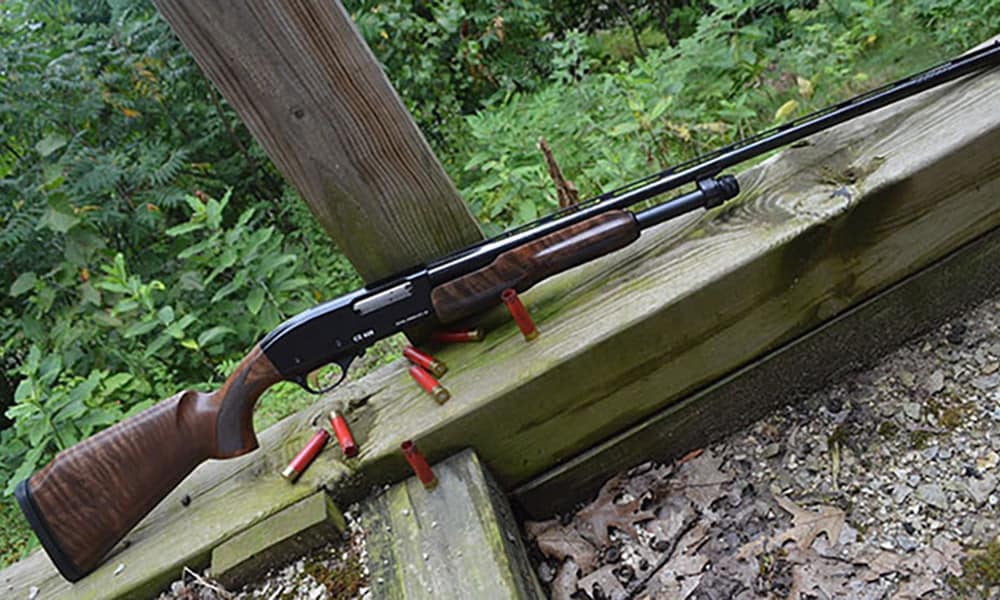 The pump-action shotgun has long been a staple in most homes defense plans due to its ease of use and effectiveness. (Photo: Kristin Alberts/Guns.com)

When the topic of home defense is discussed, you can’t venture too far without mentioning the venerable shotgun. A staple of many homes for decades, the shotgun has proven it’s a contender in the home defense market. The two most common styles of shotguns for home defense are the pump-action, defined by its iconic movement of the forearm backwards then forwards to chamber a fresh round, and the semi-automatic, which chambers a new round through either a gas system or recoil

The shotgun earned its place in American homes for its effectiveness at stopping potential threats. Using buckshot, the shotgun offers greater saturation and thus produces a more devastating result on targets. While its “stopping power” stacks up in the world of home defense, it’s not without its pitfalls. Namely, capacity and recoil. Smaller shooters or newcomers unaccustomed to the buck of a shotgun might struggle with the recoil and possibly walk away with a shoulder bruised. The shotgun also suffers from a lack of capacity requiring more reloads than a pistol or AR-15.

Despite some shortcomings, the shotgun has and will remain a staple in some gun owners’ home defense arsenal. 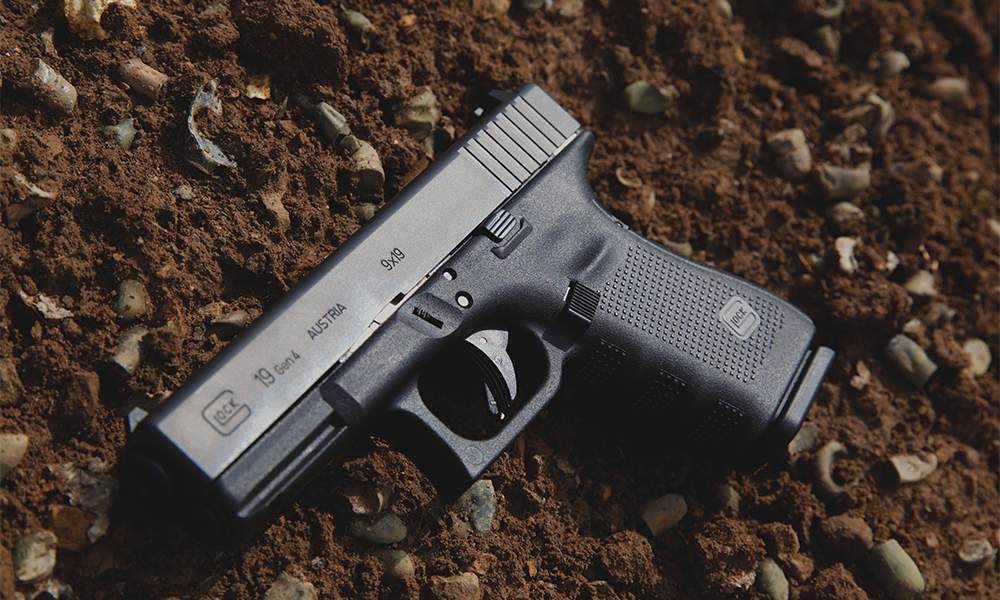 Semi-auto handguns, like the Glock 19, deliver a small and compact firearm into the mix. (Photo: Jacki Billings/Guns.com)

Though its size is an advantage for storage, the shorter barrel does mean accuracy isn’t quite on par with that of a rifle and therefore initial shots and follow-up shots may prove difficult for gun owners who aren’t getting in practice and training on the range. Additionally semi-automatic handguns can be more complicated to operate, especially for inexperienced shooters.

It comes down to training when it comes down to pistols. Gun owners dedicated to putting in the time to know and understand how to shoot well will find handguns to be a solid option for protecting the home. 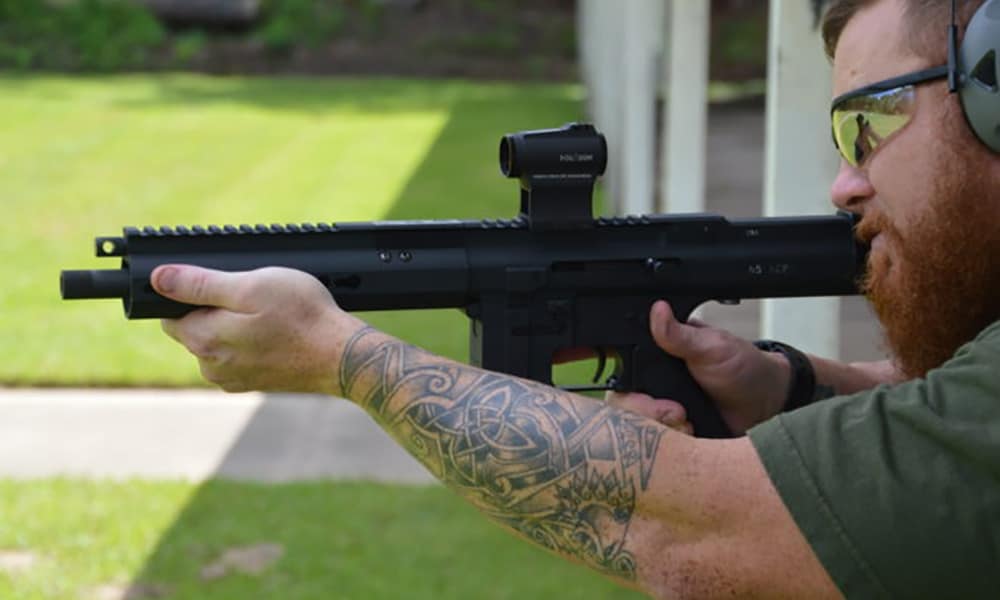 What do you get when you marry a semi-automatic pistol with a long gun? You get a pistol caliber carbine that offers a unique solution to the home defense problem. Longer and more stable than a straight-up pistol yet shorter than an AR, pistol caliber carbines have bridged the gap between the handgun and long gun worlds. Chambered in pistol calibers, the PCC looks to bring the accuracy and stability of a long barrel and stock with the maneuverability of handguns. Simply put, you won’t be lugging a large rifle through the house.

Though the PCC platform is known for increasing accuracy by giving shooters that shouldered stability, it’s reliability comes into question – especially with more “budget friendly” models. Users might note that ammunition that feeds easily into a traditional pistol, like jacketed hollow point rounds, might not feed as efficiently or smoothly into a PCC. Thus it’s important to understand the limitations of certain models and take it for some practice at the range prior to putting it to the test in the home. 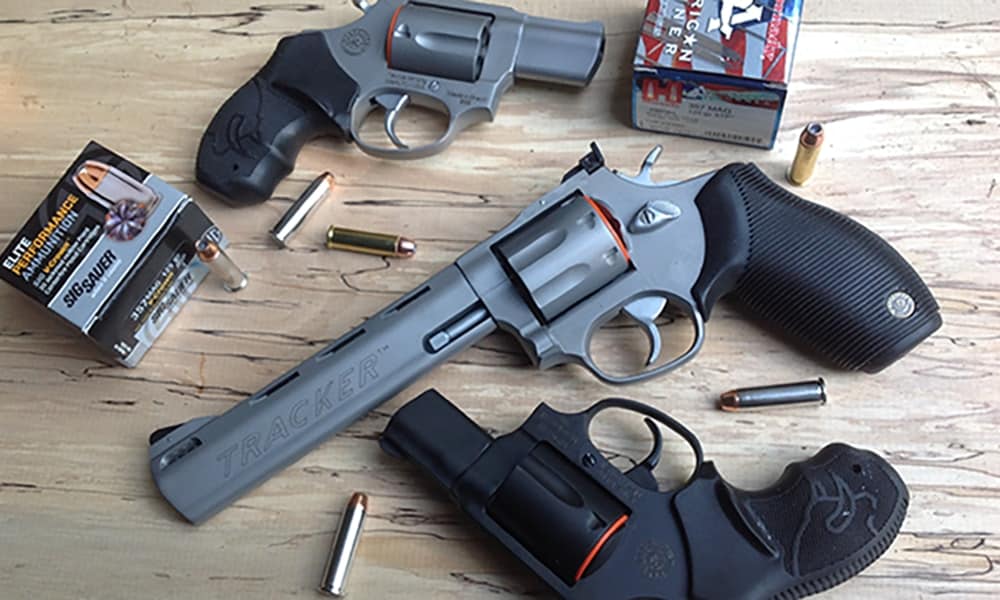 Revolvers are arguably the simplest firearm to use, making them a viable option for novice shooters. (Photo: Kristin Alberts/Guns.com)

When it comes to ease, look no further than the revolver. Featuring a cylinder that swings out to one side allowing users to load and unload, the revolver is an easy platform to learn. With less moving parts, it offers an efficient option for gun owners wanting reliability paired with simplicity.

While it boasts a shorter learning curve, it sacrifices capacity. Most revolvers only hold five or six rounds and, though easy to load, reloading altogether is time consuming. Often chambered in .38 Special or .357 Mag, defensive revolvers with a longer barrel will help shooters increase accuracy. As with the semi-auto pistol, revolvers are easy to store in a small pistol case and also easier to tote to the range for practice sessions. 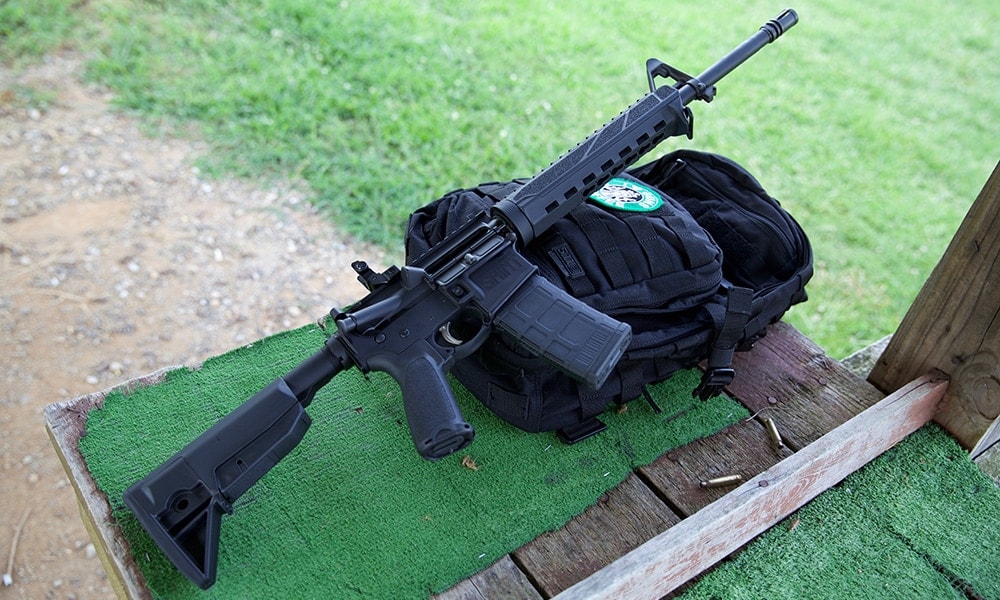 The good ‘ole AR-15 rounds out the list as a veritable option for home defense. While it boasts a longer length, which can be somewhat challenging for newer shooters navigating corners, its longer barrel offers a tad more accuracy. The longer barrel also offers room for M-LOK or KeyMod rails which means more accessories like lights or lasers.

Ammo for the AR is plentiful and relatively cheap, making it a good option to stick back for home defense. Not to mention, it’s higher capacity magazine, where applicable, delivers more rounds between reloads. Recoil on the platform is light, resulting in a controllable firearm that produces more accurate follow-up shots. That being said, .223 rounds have the potential to penetrate walls, thus those who choose this platform should remain cognizant of what lies beyond their target.