Nothing pleases me more than punching holes in paper out on the range, but let’s face it, shooting isn’t cheap. Between range fees, ammunition and targets, a few hours can easily creep towards $50 or more. Always on the lookout for training tools to add to my arsenal and save me a few bucks on the range, I came across the SIRT by Next Level Training.

Unlike other laser training tools that rely on a laser insertion into the chamber of a firearm the Shot Indicating Resetting Trigger, or SIRT for short, is a standalone unit. Sporting a red and black polymer build the SIRT is modeled after a Glock 17. It looks the part too. I’ve had plenty of range masters mistake it for a modified Glock.

Anytime we talk a polymer build there’s always the question of durability. Does it look and feel like a toy gun? The answer is no. The SIRT is solid. My SIRT has hit the floor many times through training and general mishaps. It’s still going strong. In fact, I have dropped it on concrete and it looks the same as it did the day it came out of the box. No marks whatsoever. In short, if you’re looking for a good force-on-force training aide, this is it.  You can throw it, drop it and knock it around. It’s still going to work. Think of it as the Glock of the laser world.

Speaking of lasers, the SIRT comes equipped with two. One is a standard shot indicator laser. This simply tells you where your shot landed when you pulled the trigger. The second is a take-up indicator that reports steadiness prior to the trigger pull. Bad habits such as improper grip, anticipating recoil and slapping the trigger can easily be identified with the indicator engaged. 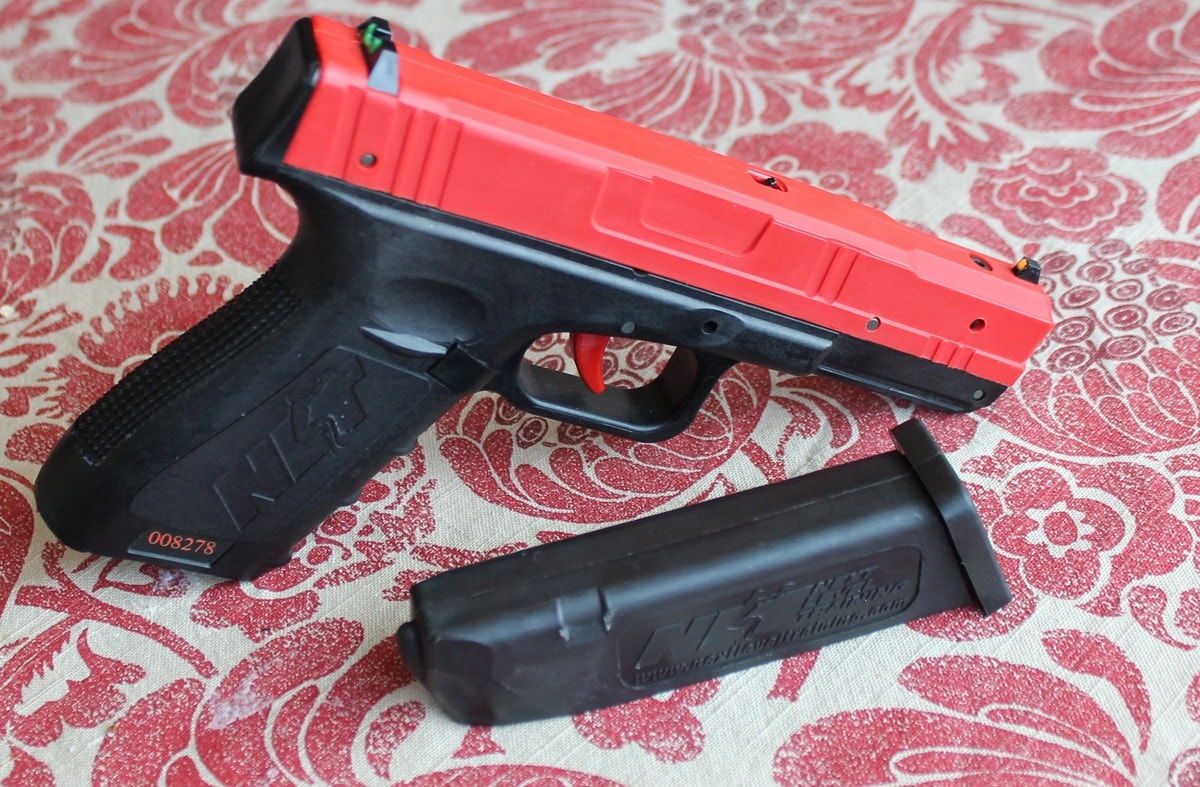 The shot indicating laser does sometimes drift, especially after a big fall, but is easily realigned using the included adjustment tool. Out of the two, I find the take-up laser to be the one I adjust the most. When instructing, I prefer to set this indicator to a position where the students can’t readily see it but I can. When training on my own, I prefer the take-up in a position that is easy for me to see. The adjustment tool is included with the SIRT. Simply insert the tool into the holes on either side of the SIRT and turn until the lasers are in the configuration you want.

Similar to a real pistol, it comes with a magazine release. The SIRT’s is located on the left side of the grip. Within thumb reach, it’s very easy to manipulate one handed. The mag release does function and ejects a weighted SIRT magazine. Though out of the box it comes with one magazine, I highly suggest investing in at least one or two more. Made out of a durable rubber, these magazines are tough and perfect for practicing speed or tactical reloads. There’s no telling how many times the three mags I own have hit concrete, dirt, hardwood, and carpet. Despite the abuse; there are no visible signs of wear.

Another little feature the SIRT sneaks into its design is a front rail. Perfect for room clearing or low light practice, a flashlight can attach to the SIRT. Be mindful, though. Despite having a Glock as its model it is not a 100-percent reproduction. Some accessories will not fit. Though not a deal breaker for most, it could present a challenge for those that want to practice with a certain set-up.

While the SIRT has a lot going for it, there was one area I wasn’t so keen on – the sights. The rear sight was okay but the front sight was difficult to see. Eventually, I added some green sight paint to the rear and orange to the front sight to give them some pop. This addition was all it took to get sight visibility where I needed them. 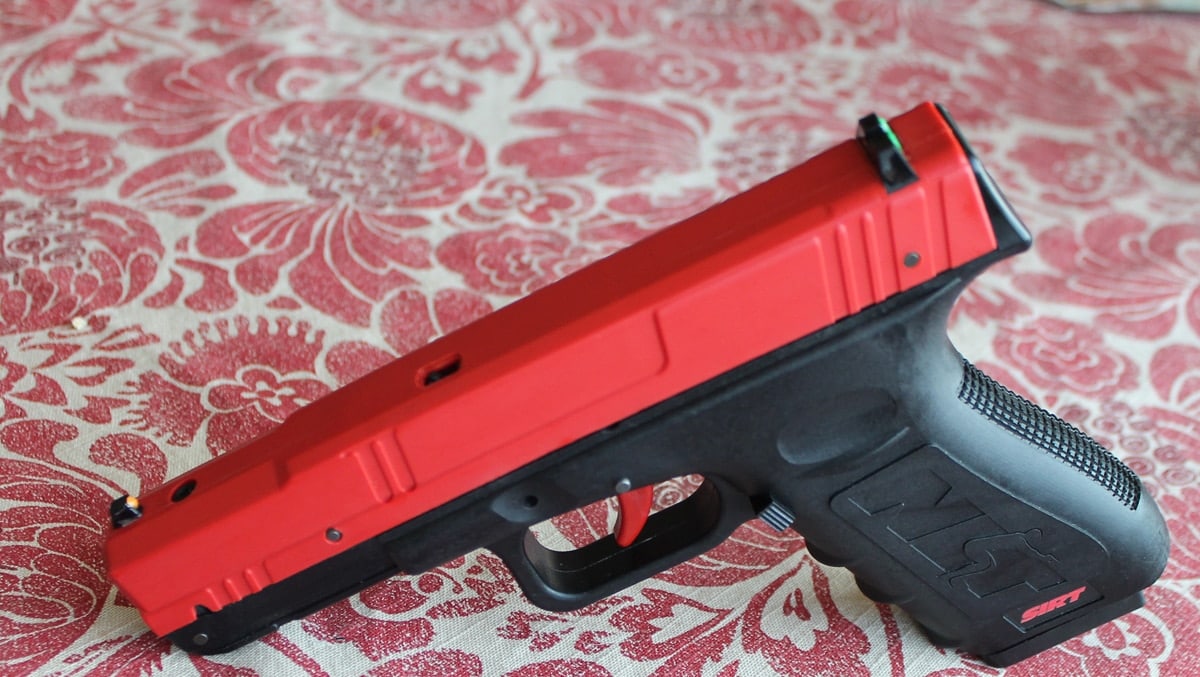 Looks like a Glock on the left side, too. (Photo: Jacki Billings)

I own several LaserLyte laser cartridges and have relied on them in the past to practice drawing with my concealed carry weapons. These cartridges are useful, especially when you want to run your own gun, but for those of us using striker fired guns racking the slide to reset the pin can be a pain. This is where the SIRT really excels. It features an automatic trigger reset so anytime you pull the trigger it “fires” the laser.The trigger comes factory set like a Glock 17 trigger, but you aren’t limited to that setting.

The trigger is also adjustable so you can dial in the exact feel you want. I personally was satisfied with the trigger so I opted to leave mine as is, but it is nice to have the adjustable option. In terms of training, the SIRT is incredibly useful on practice days when accuracy is the focus. You can pull the trigger again and again and really focus on shot placement.

The SIRT definitely helps with home-based training, but don’t count it out on the range. I’ve used it plenty of times while out shooting alongside my firearms. The biggest advantage is being able to use at ranges that disallow drawing from a holster or shooting from unusual positions. I also find myself running it prior to my real firearm for extra practice before real rounds go down range.

Though I do use the SIRT as a personal gun trainer, it also comes in handy while teaching. As an instructor, the simplicity of the SIRT can’t be beat. Again, laser cartridges have their place in the training world, but I find myself grabbing for the SIRT first when dealing with a student who is struggling to master grip or marksmanship. Even when teaching advanced courses with seasoned shooters and competitors, the SIRT still proves useful with that instant feedback.

Easily accounting for about six trips to the range, the SIRT quickly makes up for its $200-price tag. True, no laser is going to replace live fire exercises, but, the SIRT proves to be a useful addition to a training arsenal.